Locavore approved? YES- dedicated to serving the freshest and the most sustainable seafood possible.  They have an "Unsung Heroes" menu that exposes guests to less well known seafood that is right on our doorstep.  Here is a little exerpt from their menu that highlights their dedication to sustainable seafood: 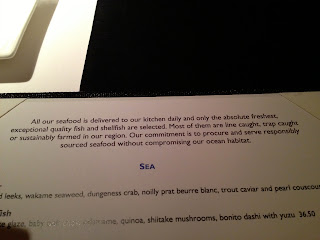 With so many great new restaurant popping up all over Vancouver lately, I have busy following online reviews and the twitter feed about which I should visit next and then trying frantically to keep up with my "to-go" list .  This weekend, though, I thought we would switch it up a bit and rediscover some old favorites instead.  After a great meal out with friends at Acorn on Friday night (see Acorn review here), Hubby and I were excited for a nice romantic couple's night at Bluewater Cafe on Saturday.


Blue Water Cafe is located in Yaletown, right in the heart of downtown Vancouver.  Yaletown, known as the "yuppie" part of Vancouver, has many hip restaurants and bars and attracts many of the professionals that work nearby.  Bluewater's exterior fits in perfectly with the Yaletown vibe.  It is quite minamalist, with a sea-blue awning and a simple yet sharp sign that draws the attention of passerby.  The interior is significantly more elaborate and the room is much larger than you might expect from the outside.  There are several focal points, including a bar next the entrance where guests can enjoy cocktails, a sushi bar and a large open kitchen.  There is certainly a formality to the space with a hint of a nautical team to make it feel less "stuffy".  As with most restaurants in Vancouver, you will find quite a spectrum in terms of dress, with some in suits and dresses, and others in shorts and t-shirts. 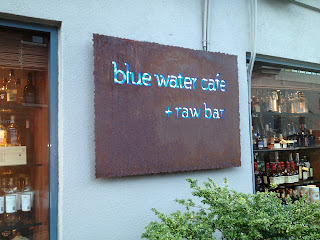 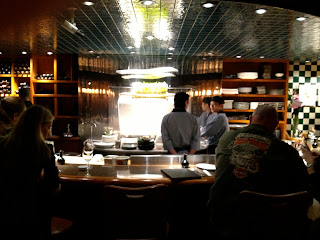 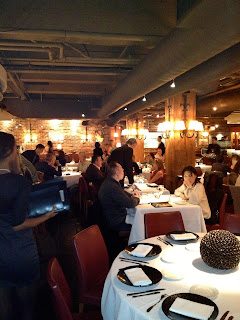 The most impressive part of my dining experience at Bluewater was the impeccable service.  From start to finish, there was not one part of the service that I could find fault in.  From the hostesses at the front, to the efficient and knowledgeable server who took our order to those who brought our dishes,  they all made service seem effortless.   In terms of service alone, there are few places in Vancouver that can measure up to Bluewater.

As previously mentioned, Bluewater had a nice bar where guests can sit and enjoy a drink.  There are is quite a selection to choose from, including a unique cocktail list, a very extensive wine and beer menu (lots of BC wines, at a variety of price points), and an impressive collection of spirits (you name it, they have it!).  Hubby and I have recently jumped on the cocktail bandwagon, and we were eager to see what Bluewater had to offer.  I initally chose to Lowland Mist (auchentoshan, peach puree, allspice and lemon) but unfortunately they had ran out of peach puree so the server redirected me to Jacob's Ladder.  It is gin-based with a hint of chartreuse (a French , herbal-infused liqueur) and lightened with basil and cucumber. Although it was not my drink of choice (I have had many similar herb-based cocktails and was looking to try something new), it was very well-balanced and refreshing. 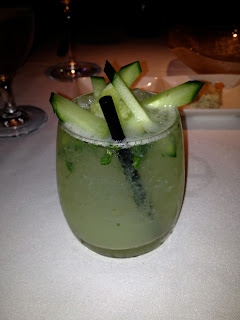 Hubby ordered the Kentucky Bramble, a bourbon-based cocktail with blackberry preserve to add a hint of sweetness which Hubby enjoyed very much. 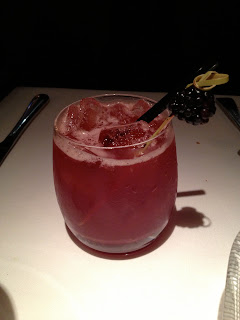 It was then onto the food.  The menu includes more than just the typical appetizers, mains and desserts.  It also has a raw bar section which includes sushi from the raw bar (many come to sit around the sushi bar and enjoy sushi and raw plates for their meal), a "live tank" section for ordering whole crabs and lobster (depending on what is fresh and available), and a "seafood on ice" section including an impressive selection of oysters and their infamous "seafood towers" (quite a site to see!).  There is certainly something for everyone, for every occasion, at Bluewater and one can visit multiple times and have a completely different experience depending on what section of the menu they order from- a "choose your own adventure" of sorts.


We were first treated to complimentary bread that came with a both a red pepper hummus (I ended up licking this up with a knife sans-bread, much too yummy to leave even a drop behind) as well as a unique seaweed butter with yuzu that my husband was a bit skeptical of at first, but then came to appreciate for its originality. 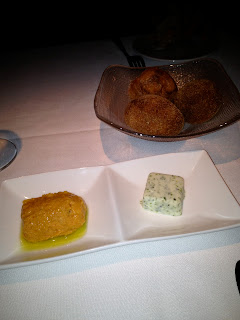 Hubby, who is likely going to turn into an oyster by the end of the summer since he eats so many, just had to try some of Bluewater's mollusks.  They offer a very impressive selection of oysters from BC, Washington and the East Coast.  Hubby chose the  BC Kusshi Oysters, a smaller variety of oyster that is one of his favorites.  They were extremely fresh, served on ice, with a red wine mignonette and horseradish that really complimented the oyster without being overbearing. 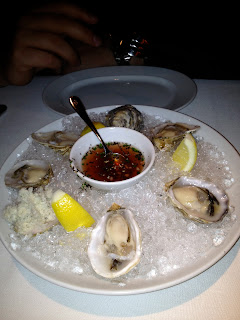 For my appetizer, I chose the feature appetizer of the night, the spot prawns.  Last year, I felt that I had missed out on spot prawn season, so I really wanted to get my fill during the short season this year.  Lucky for me, we got there just in time and I snagged the last plate of the night! The spot prawns (heads and tails removed) were served straight up, plain and simple, and had a naturally creamy texture.   They were served on a bed of asparagus (including asparagus shoots) and ramps, with a pea shoot garnish, and beneath that, an beautiful green herb puree.  Although it was a very refined and well executed dish, I was dismayed when it disappeared in only a few small bites!  I thought that, for 17.50, it should have had a bit more substance, either by the way of more spot prawns (there were only 5) or more vegetables (would have loved more of that delicious asparagus). 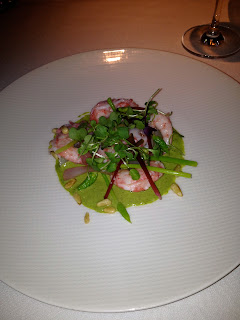 For his second appie of the night, Hubby ordered his second favorite seafood preparation after oysters- the Ahi tuna tataki.  Although it was not quite as he expected (more of a plain tuna sashimi with soy sauce than the more "jazzed up" version that he is used to) there was no denying that the tuna was of top quality and had a wonderfully smooth texture. 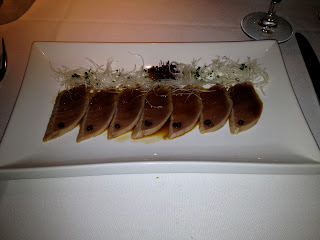 Because Bluewater does seafood so well, I just knew that I had to have their Sablefish, even though I usually stay away from broth-based fish dishes (fish floating in broth just does not appeal to me).  Just as I expected, the fish was absolutely perfect (cooked exquisitely) and after my miniscule appetizer, I was pleased to find a nice sized portion.  But I must say,  the rest of the dish fell flat for me.  Although the boy choy had the surface area to soak up the salty and flavorful broth, the small grains of quinoa floated around awkwardly and were not able to absorb its flavor.  The fish was wonderful but the rest of the dish did not excite me. 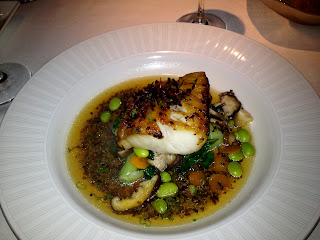 The Qualicum Bay Scallops that Hubby ordered as his main once again demonstrated how skilled the chefs at Bluewater are when it comes to preparing seafood.  The scallops were seared to perfection and almost melted in your mouth.  The citrus sauce was nice and light so as not to overpower the dish.  Again, however, the rest of the plate was a bit of a miss.  Hubby was a bit perplexed by the huge (and I mean HUGE) pile of endive (or were they onions?) beneath the scallops.  It is a good thing he loved onion!  The wild rice griddle cakes were a nice in both texture and flavor but very tiny and left him wanting more. 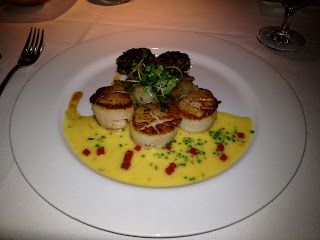 Even after the bread, oysters, tuna and scallops, Hubby was still hungry and felt like he needed some starch to satiate himself (and I eagerly dug in too!).  He therefore turned to the sushi menu and ordered the Dynamite roll that I eagerly dug into as well.  Although the big juicy shrimp set this roll apart from those found at the average sushi restaurant, the rest of the roll was a bit last luster and we could not really taste the spicy mayonnaise.  And with only 6 pieces, we were still left with room in our bellies! 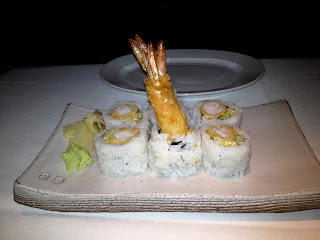 In keeping with the outstanding customer service offered throughout the night, we were treated to a nice little sweet bite at the end of our meal.  A very nice touch! 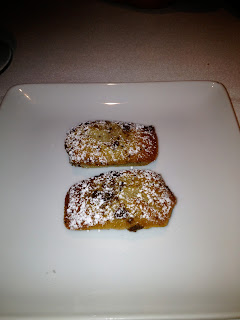 In terms of service, dedication to sustainable seafood and skill in preparing seafood, Bluewater is definitely among the best in the city.  Overall though, I cannot count Bluewater among my current favorite restaurants.  For me, the meal lacked "wow" factor.  With a bill of almost $250 for the two of us, I expected more in terms of quantity, originality and flavor.  While the seafood was undeniably excellent, the rest of the meal just felt a bit flat.  With so many places on my wishlist still to visit, it may be a while before I head back to Bluewater.

Posted by Little Miss Locavore at 22:14