Locavore Approved?  As it reads on the front page of their website: "Quince features California contemporary cuisine that celebrates the seasonal bounty of Northern California".  Chef Michael Tusk may specialize in French and Italian cooking techniques, but his ingredients are all about showcasing what California has to offer.

Reservation required?  Although not as tough of a table to get as some, be sure to book Quince well in advance to secure your spot.  I was pleased how readily available they were via email and how they rapidly responded to my email about dietary preferences within 24 hours.  They also graciously accommodated a change in our reservation time about 2 weeks before our visit due to changes in our travel plans. 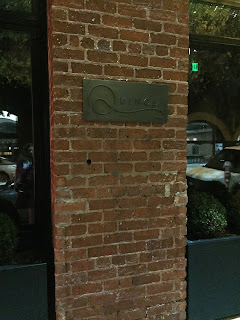 It is quite shocking that Quince had not even been on our restaurant radar until about a month prior to our New Year's trip to Napa.  To be very honest, the only reason we ended up making a reservation there was because it was one of the few on the Michelin list that would accommodate us on New Year's Day when we would be making our our way back from Napa prior to catching our flight back to Vancouver the next morning.

Fortunately for us, the stars aligned and Quince was able to accommodate us for what was to be one of the best meals of our lives.

Quince is located in the Jackson Square area of San Francisco in a beautiful historic brick building.  At the helm is chef Michael Husk, a well-seasoned chef who gained years of experience in Europe before moving back the to US to share his passion for French and Italian cuisine.  In addition to Quince, he also owns a more casual restaurant next door called Cotogna, where he serves his delicious food in a more casual atmosphere.

Quince has been toted as one of the most elegant rooms in the Bay Area.  It underwent a sizeable renovation in 2014 (apparently led by the chef's wife), adding beautiful a Japanese wall  to partition the space into different rooms, an impressive glass chandelier and beautiful artwork and flower arrangements throughout.  It is absolutely stunning. 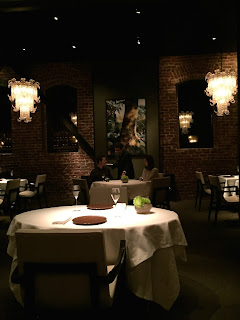 As for the service, I must admit that it was not an instant success.  At the beginning of our evening, I couldn't help compare the service to our experience Meadowood the night before, where the servers were 100% genuine, talkative and personable.  Although the servers here were all very professional and attentive, I felt as if they initially seemed pressed for time and were always rushing off to the next table.  As the night went on however, the servers seemed to pick up on our passion for good food they warmed up to us.  We eventually had the sommelier himself, who found out that we were fellow Canadians, come out to our table to have a chat and hand deliver a complimentary glass of an amazing Napa Pinot Noir.  Then, to top it all off, we were invited into the kitchen at the end of the meal for a quick tour and a last little palate cleaner (a gin and tonic in a bite!).  Thankfully, the service really did a 360, going from rushed and impersonal, then skyrocketing far and beyond expectations, such that we felt very special by the end of the evening.  A very fortunate turn of events indeed!

Quince offers only one option to diners- its $200 prix fixe menu.  Having said that, they will gladly accommodate dietary restrictions and some general food preferences.  On the night of our visit, there were also 2 "add-on" options to the prix fixe menu, showcasing end-of-season truffles that were on display at the back of the restaurant.  In addition to the food menu, they also do cocktails and have a very extensive wine list, with over 100 pages of champagne and wine offerings.

The food ay Quince is described on website as "California contemporary cuisine that celebrates the seasonal bounty of Northern California".  There were notably french and italian elements weaved into the tasting menu, which stem from Chef Tusk's experiences in Europe as a young chef.  The most memorable, and one the of house specialties, is the fresh pasta which we were fortunate to get as 3 of our tasting menu dishes.  When we had our tour of the kitchen, we were shown a cooking station dedicated solely to pasta, which was apparently one of the chef's requests when the renovation was done.  Quince's more casual sister restaurant next door, Cotogna, also further showcases Tusk's knack for pasta.

I would advise coming to Quince with an empty belly.  We left more full than we had been after the French Laundry or Meadowood, as there were lots of special touches and surprises scattered throughout the meal which I found very fun and exciting.  There were lots of playful dishes as well, including very creative creative canapés, food served with tweezers instead of cutlery, and a bit of smoke for good measure.  Also impressive were the serving dishes, including beautiful wooden bowls that we were told were designed by an artist who lives in the bush without a telephone!  Their attention to detail with plating really added to the experience.

Here is a peak at the dishes we enjoyed: 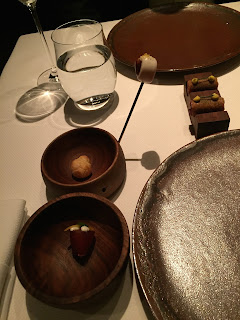 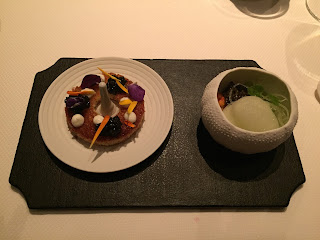 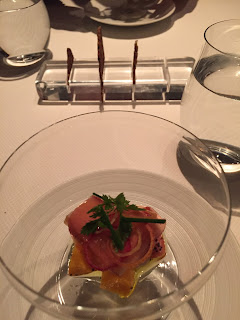 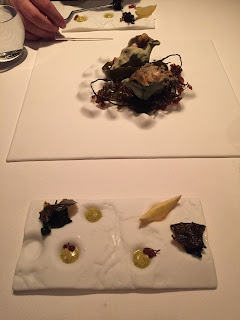 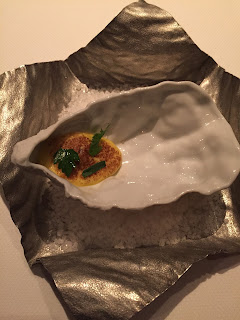 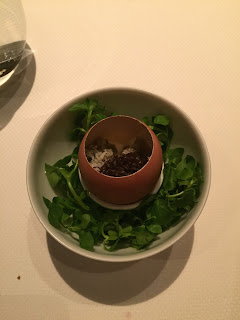 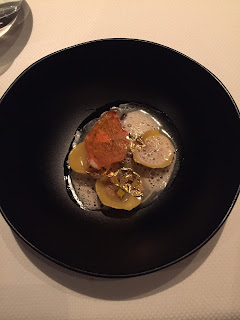 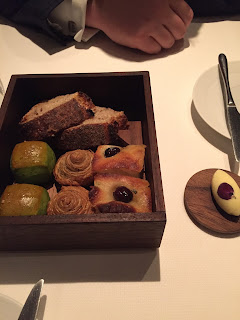 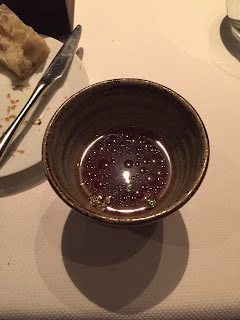 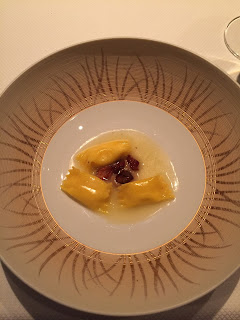 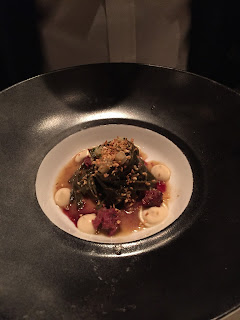 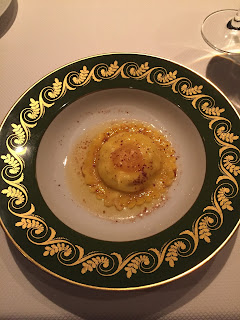 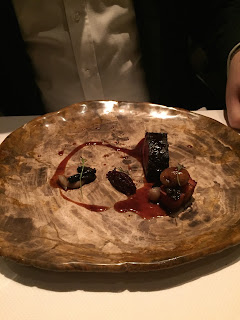 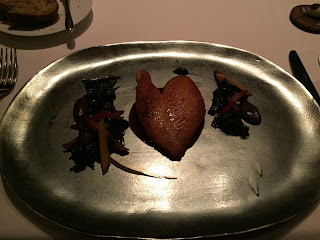 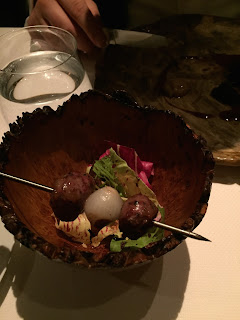 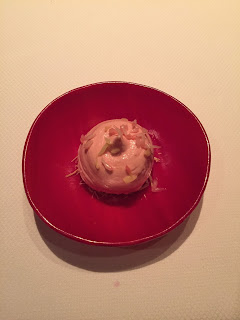 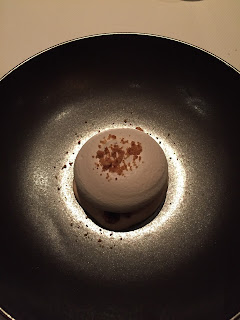 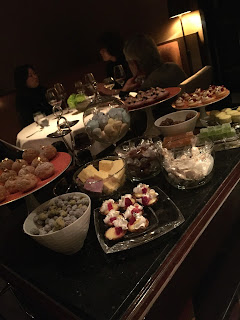 Overall Verdict?
As we were leaving Quince that evening, Hubby turned to me with a shocked look on his face saying "I think that may have been the best meal of my life!".  That is quite a compliment, considering we have just dined the last two nights at the French Laundry and Meadowood!  Quince was certainly the wild card of the trip, but ended up surpassing our greatest expectations.  We predict that it will not be long until Quince earns its 3rd star.

Posted by Little Miss Locavore at 23:45 No comments: