Locavore Approved?  YES- This little gem showcases primarily local ingredients with a few authentic Spanish accents mixed in for good measure.  When we visited in January, the menu was chock full of winter veg (beet, celeriac, potato) as well as locally produced fare such as cheese from Salt Spring Island.  For authenticity sake, spanish delicacies such as Iberico ham are also up for grabs.

Reservations required?  We walked in easily without a reservation, but once this place catches on, it may be a different story! 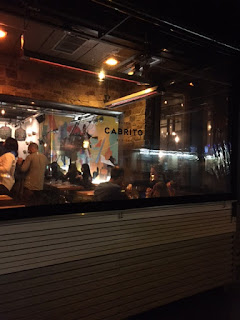 Cabrito is one of the new kids on the block in the uber hip Commercial Drive which is quickly becoming populated one of the up and coming foodie neighbourhoods in Vancouver.  Having just opened in December, Cabrito is off the ground and running and had already found its stride when we visited in January.

Cabrito set up shop in the space previously occupied by the short lived Wishes and Luck, and made just some minor adjustments such as the eye-catching menu placed over the bar.  It is a very quaint space, with a bit more room in the summer when they open up the front wall of the restaurant and make a few more seats outside.  Without the front opened, it sits only about 30 guests, with seats against the far wall, a high top booth along the other side and a few seats at the bar looking into the kitchen.  The small number of guests makes for very attentive  and personal service, with water glasses always being refilled and lots of time taken for answering questions about dishes of interest.  I thought it was pretty awesome when, after I commented on their beautiful serving dishes, they offered to get me the email address and instagram info of the artist who crafted the dishes after I and even more impressed when the chef himself came out of the kitchen to hand-deliver it and speak with us.  He actually spent a good 15-20min outside of the kitchen chatting with customers which rarely ever happens in this city.  Major points for that!

I went to Cabrito expecting traditional Spanish tapas like those at the beloved Espana in the West End.  What I found though was a fusion of West Coast, Spanish and French cuisine (the chef himself is French).  I loved the light, fresh flavour that the chef incorporated.  He does not even own a deep fryer and everything is made with a good dollop of olive oil.  In true Vancouver style, they also offer, clearly indicated items that are vegan and gluten free.

In terms of dining style, the dishes are made to share around the table, with the suggestion of 2 tapas for each diner.  Hubby and I shared 4 between us, but ended up getting 2 extra because we wanted to sample more of what this talented chef had to offer.  Get your friends together and go with a big group so you can order a good variety of dishes.

Here is what we enjoyed:

Jengibre Margarita- This is not your typical sweet margarita, and very well balanced with grapefruit juice and lime, ended with a lovely salted rim.  It paired really nicely with the tapas as per the server's recommendation. 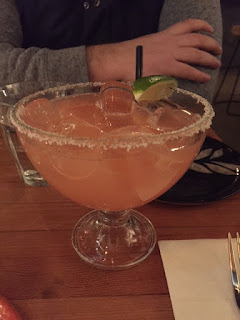 Fresh beet tartare- This lovely, light winter/fall dish came topped with a quail egg that we were told to mix in, giving it a nice texture for scooping onto the crostini.  It was finished herbs for a nice hit of freshness. 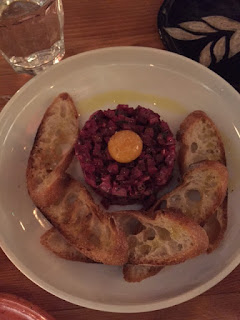 Scallops- These were my personal favourite. The perfectly seared scallops were creatively skewered with celeriac and placed overtop a mound of sweet potatoes that were to die for. 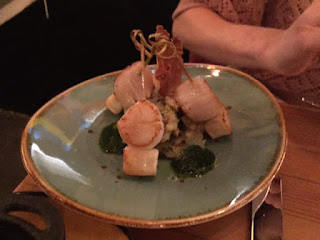 Meatballs- These were Hubby's choice.  I do not eat meat, but I greedily scarfed down every last drop of the tomato sauce around the balls as it was too good to leave behind. 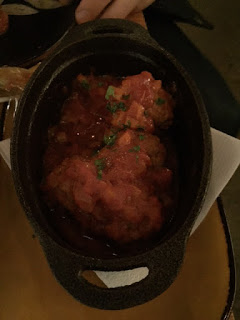 Ceviche- I loved the addition of liquorice that came out subtly and added a unique twist.  Again, very light and refreshing. 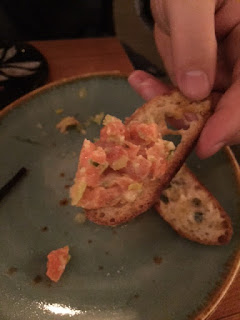 Patatas Bravas- This more traditional spanish dish was smothered in a lovely piquant tomato sauce smothered with a hint of smokiness. 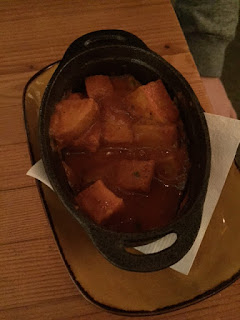 Risotto Galette- This was Hubby's favourite of the night.  The simple risotto (perfectly al dente) was seared for nice crispy edges and topped with arugula (that's about all you can see in this pic!).  Simply delicious. 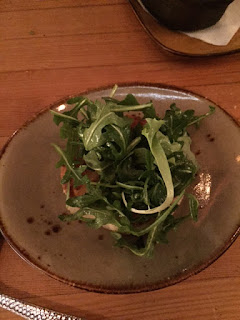 Overall verdict?
Cabrito was a very pleasant surprise, both in terms of the food and the overall vibe.  It was one of the most personal and welcoming dining experiences that we have had in this city, and the tapas were equally impressive.  And to top it all off, we got out for under $90 for the two of us, and we had more than enough to eat.
With any luck, Cabrito will meet much future success!

Posted by Little Miss Locavore at 23:25 No comments: