Locavore Approved? YES (nightly "Harvest" dish featuring seasonal ingredients from local farmers, "limited time only" ingredients such as nettles and fiddleheads) but could do even better (Some dishes stay on the menu a bit too long- perhaps a chalkboard would be better so that dishes could be changed more frequently based on local availability of ingredients)

Acorn, opened now for almost a year, was the first to bring the concept of vegetarian fine dining to Vancouver.  Since its opening, other vegetarian joints have popped (Heirloom on 12th, the brand new Graze on Fraser), giving vegetarians more to order than the classic pasta and tomato sauce that appears as the token vegetarian option on many menus.  Acorn has shown that it can hold its own against Vancouver's best and brightest when it snagged an honorable mention in Vancouver Magazine's Best New Restaurant category.  This is not really a surprise considering the head chef, Brian Skinner, has worked at European Michelin star restaurants in Europe including the infamous Noma in Copenhagen, once named as the world's best restaurant.  He then was involved in debuting vegetarian restaurants in London and New York.  We are fortunate to have such an experienced chef back here in Vancouver.

I visited Acorn several months ago with Hubby and had quite enjoyed my meal.  I have been yearning to go back for some time but carnivore Hubby has not been so keen on this idea.  I was very pleased when a couple of work colleagues who had never been to Acorn before wanted to give it a try.  The three of us ladies went on a triple date there last Friday night.

The storefront for Acorn, located just north of King Edward on Main is quite minimalist, but the big acorn on the sign helps in identifying them.  Inside, the decor is simple, with lots of foliage and greenery that reminds me of a rainforest.  They have some unique lighting that kicks up the hip factor.   They have lovely white shutters on the windows that can be opened wide to let in some fresh air on nice nights. Tables are fairly close together but I did not feel too crammed in.  There is a nice bar with a few seats where diners can wait (and there usually is a wait, at least on the weekend) and enjoy a glass of wine or a signature cocktail (see below).  Be sure to make a trip to the washroom while you are there- you will be treated to the sounds of singing birds as you take care of business. 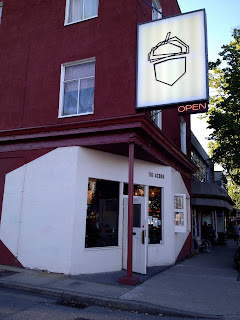 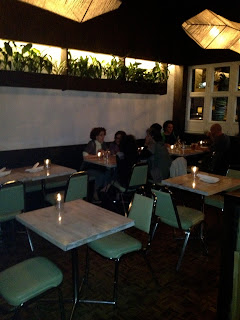 Unfortunately, service on the night of our visit left a lot to be desired.  While the server that initially showed us to our table was quite friendly, our main server of the evening was rather curt, to the point of  being rude.  After ordering some drinks, we were enjoying some good conversation and were in the mood to enjoy our beverages before ordering food.  This plan did not seem to sit well with our server who interrupted us every couple minutes to take or food orders, getting seemingly more and more impatient each time.  What really took the cake for me was that our menus were whisked from underneath us after we ordered our appies.  When I asked to keep one in front of me so that we could discuss which mains we would order, I was told that menus were to be kept at the side of the table because we would spill something on them and they could then not be used for other guests.  I felt as though I was a child being scolded!  This really left a sour taste in my mouth.

Fortunately, our food arrived in a timely manner and helped to dissipate my annoyance.  We ordered three appetizers and three mains plus one dessert, and shared all of them so that we could taste as many dishes as possible.   Here were our selections for the table:

The wine list is small but has many local options that include some of my favorite wineries (Joie, Blue Mountain).  The prices per glass are quite reasonable.  They also have an abbreviated cocktail list (only 4 creations) but I see that they are looking to hire a new bartender so perhaps this will expand.  Although there is not a whole lot to choose from, I did enjoy the Mirror Lake which was very refreshing (lots of lime and mint) and not too sweet.  Although it was made of bitters, ginger beer and bourbon, it did not have an overwhelming alcohol taste.  It is a very attractive beverage with a pretty rim of red at the top, and the slice of candied ginger on the side of the glass was a nice touch. Then it was onto the food. We ordered three appetizers and three mains plus one dessert, and shared all of them so that we could taste as many dishes as possible.   Here were our selections for the table:

Kale- One of my dinner companions loves kale and makes a mean kale salad of her own so she was keen on seeing if Acorn's version could stand up to hers.  Fortunately, it did hit the mark.  This play on Caesar Salad was kicked up a notch with tempeh "croutons", crispy capers and strips of asiago cheese. Although it was a bit overdressed for my liking, the dressing had a very pleasant creaminess that was surprisingly light.  This salad could easily be a meal on its own- even this "small" size! 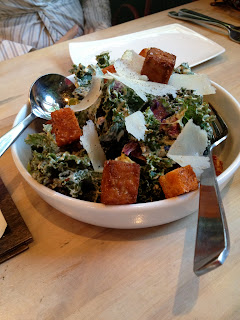 Chickpea- These little crunchy legumes were a great appetizer for the table, especially if you like spice!  The piquillo peppers packed a nice zip and the smoked tomato coulis added even more heat.  The addition of mint added a welcome balance to the spiciness.  I would recommend this more as a sharing dish as it might be a bit too much of the same for one person. 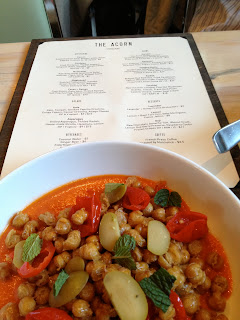 Fiddlehead- This was a the table favorite of the all of the appetizers and my favorite part of the whole meal.  The fiddleheads were beautiful both in presentation and flavor and they were prepared beautifully. The light butter sauce was cleverly placed at the bottom of the dish so as not to soften the fiddleheads or mask their flavor.  Although I appreciate the fact that the the polenta and the walnuts may have been added for textural diversity, I think that it made the dish too "busy".  The fiddleheads were delicious enought to stand up on their own, especially as a first course. 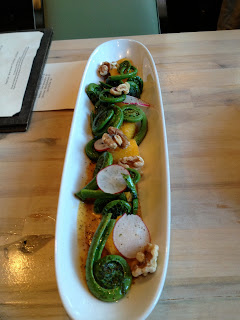 Stinging Nettle- What a beautiful dish with so many shades of green!  It was spring on a plate!  I loved the variety of mushrooms (who needs protein when you have all of this mushroom meatiness!) and the gnocchi was cooked beautifully.  I also enjoyed the creaminess of the creme fraiche that laid underneath.  I did think that they went a bit overboard with the number of peas on the plate, and I would have appreciated more of the nettle flavor to come through. 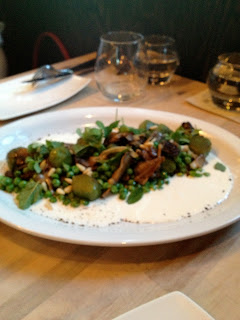 Halloumi- Although online reviews have given this a big thumbs up, this was by far my least favorite dish.  Hubby ordered this when we went together when Acorn had just opened and he was not a big fan either.  I think the purpose of keeping it on the menu longterm is to appease meat eaters that are "dragged" here by a friend or significant other (kind of like Hubby was) but I think they could do much better.  This dish is just way to heavy and clunky (one bite of that deep fried cheese was more than enough for me!).  The creamy peas and the fried zucchini cake were decent on their own and, combined with lighter ingredients, would have made good sides.  I propose that Acorn try to dazzle self-professed meat eaters with delicious vegetables prepared in creative ways instead of defaulting to the deep fryer! 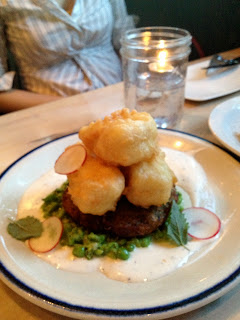 Havest (israeli couscous, baby carrots, radish, mushroom puree)- The concept of this dish is wonderful in that it showcases seasonal, local ingredients and is what I think Acorn should do a lot more of instead of sticking to the same menu items for months at a time.  I remembered enjoying the Harvest very much on my first visit so I was keen to see what they had in store this time.  Unfortunately, I was a bit let down by the lack of flavor in this particular dish.  There was way too much dry isreali couscous (no need for this much starch!) and the mushroom puree was a bit bland.  I do, however, commend them for bringing together ingredients that highlighted the transition from winter (carrots, mushrooms) to spring (asparagus, radishes) and for letting the vegetables be the focal point. 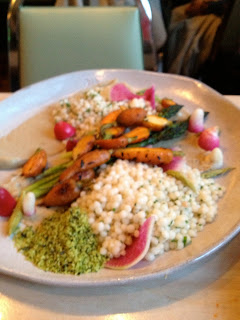 Lemon- This beautiful, petite dessert that was a welcome contrast to the mostly over-sized appies and mains.  The lemon filling was wonderfully tart and light (a perfect palate cleanser!) and the tart was buttery. I would, however, have liked the taste of basil to be a bit more promient to make it a bit more complex in flavor.  The small meringues and cassis jellies were like little jewels on the plate and really made the dish pop. 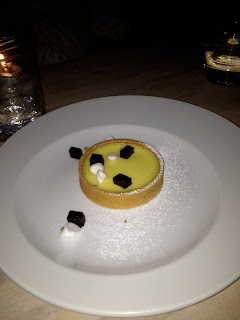 Overall, I had a lovely evening out with my very fun (and foodie!) co-workers at Acorn.  The meal was very good in general, but there are certain things that I think could be better.  First of all, I think that some dishes were perhaps over-thought and over-complicated, despite the short and sweet one-worded names as they appeared on the menu.  Although I agree with "jazzing up" the veggies a bit, sometimes more is better and an extra 1-2 elements on the plate would have made it more successful than having 4-5 extra elements.  Secondly, I think that the portions are too large and too much of the same for one person.  I do not believe that they are meant to be sharing dishes but I was very pleased that we shared as I could not have eaten all of any one of those dishes (except maybe the fiddleheads) to myself.  And I usually have absolutely no trouble finishing everything on my plate!

Despite these suggestions, I commend Acorn for starting a new fine-dining vegetarian revolution here in Vancouver.  It is about time that vegetarian food gets the recognition that it so deserves!

Posted by Little Miss Locavore at 21:21