Reservation required?  This one Michelin star restaurant is a fairly easy reservation to get, and on the Tuesday night that we were there, there was even enough space left for 7 walk-ins around the 18-seat counter.  This may soon change as news spreads about how great it is! 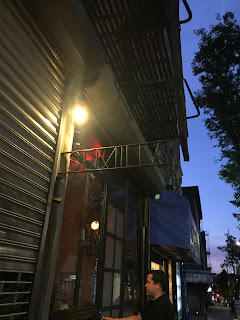 Atmosphere: After a few nights of fine dining, Semilla was a welcome, refreshing change for us.  It is located in the Williamsburg neighborhood of Brooklyn, which is a pretty easy subway ride away from downtown Manhattan.  The street it is located on is pretty nondescript (and maybe just a bit sketchy), dotted with a mix of fast food chains, repair shops and convenience stores.  Keep your eyes peeled for a small metal sign hanging above Semilla’s doorway (it is easy to miss in the dark).  Inside, you will find a very fun atmosphere, with loud music and a hip U-shaped counter that extends around the kitchen.  The décor is basic, with a few trendy elements scattered around the room (like a bunch of garlic hanging in the corner).  The high stools around the counter are pretty close together, so be prepared to sit snuggly next to your dining partners.  You will also be well entertained by watching the small but mighty team of chefs preparing your food in a cramped kitchen at the back.

Service: I am quite amazed at how such a small staff of chefs and servers is able to accommodate 18 guests at a time and do it so effortlessly.  There is one main hostess who does everything from greeting guests to laying out cutlery to clearing and serving dishes.  The chefs, who already have their hands full preparing the food, also serve many of the dishes, including the head chef Josa Ramirez-Riz himself, which allows you to get your questions answered by those who know the food best.  The sole sommelier, who also does many other odd jobs throughout the service, did an amazing job selecting special drink pairings for our dinner, including a 1990 Riesling from Germany and an interesting port-like Chardonnay.  Everyone working here is clearly passionate about what they do and hardworking beyond belief.  And a special surprise- you will receive a copy of the night’s menu the next day via PDF to bring back the good memories.

Food: Semilla calls their food “vegetable-focused”, meaning that vegetables form the basis for the dishes.  On any given night, there may be some seafood or meat thrown in (we had cuttlefish and scallops) but the vegetables are clearly where its at here.   If anyone can make a carnivore love vegetables, it would be Chef Ramirez-Ruiz.  The way he is able to use seasonal vegetables (think summer peas, beans, mushrooms and rhubarb woven throughout) and a generous portion of fresh herbs to make dishes that were evocative, creative and downright delicious, was absolutely astonishing.  The 8-10 course tasting menu is guaranteed to delight and satisfy vegetarian and meat eater alike (including meat-loving Hubby!).   There were a few standout dishes that were knock-outs, beating out the dishes I had at 3-Michelin meals on the same trip.  And I feel the need to make a special mention of the made-in-house bread (sourdough and potato on the night of our visit)- hands down the best bread I have ever had, and I made such a fuss about it that Chef Ramirez-Ruiz brought us along a second helping!

Here is a peak at the dishes we enjoyed on our visit (only one tasting menu option available, but they will accommodate vegetarian requests/allergies with advanced notice).  You may not see these same dishes again as the menu is constantly evolving to keep pace with seasonally-available ingredients. 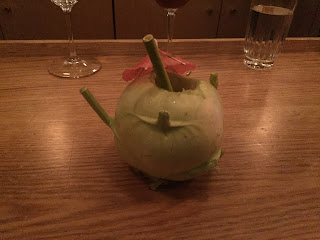 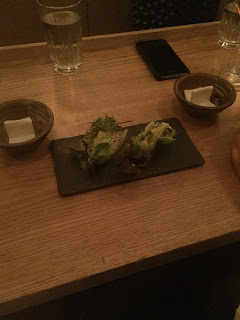 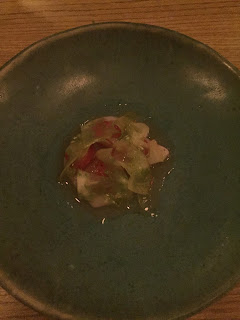 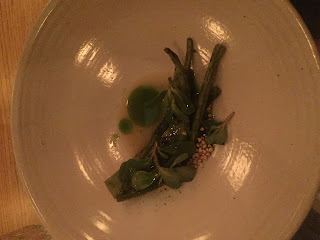 Potato and rye sourdough with cowbell butter and buttermilk 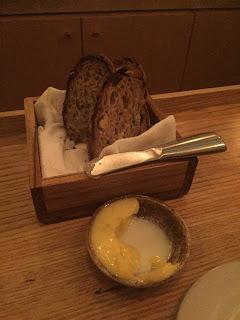 Nettle-stuffed morels with cuttlefish and flowers 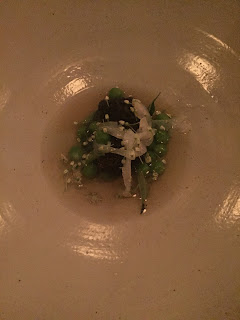 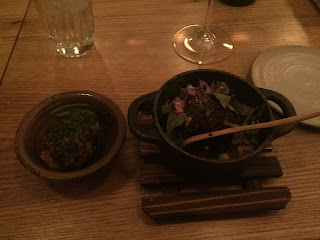 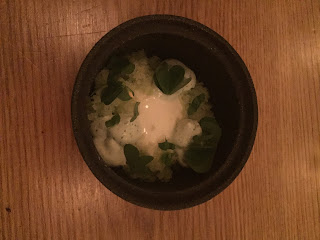 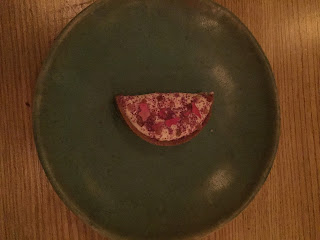 Overall verdict?
I would (and will) go back to Semilla over and over again to see what other amazing vegetable creations Chef Ramirez-Ruiz has up his sleeve.  Surprisingly, Hubby the self-professed carnivore, feels exactly the same way and maintains that Semilla is among the best 1-stars he has ever been to.  This speaks to Chef Ramirez-Ruiz talent in showcasing vegetables in new and interesting ways, and to the fun and vibrant vibe that Semilla emits.  For the price (85$ for the 10 course meal), Semilla really cannot be topped.  Semilla is certainly one to watch in the coming years as it is no doubt destined for more great things to come.

Reservations recommended?  Yes, however not as much so as others in the city (Eleven Madison Park, Chef’s Table at Brooklyn Fare).  We were able to change our reservation day about 3 weeks out without an issue (for a 9:30 reservation).  If you have your heart set on a particular time/day though, be sure to reserve well in advance (max 6 weeks ahead).

Atmosphere: Le Bernadin is located near Times Square, right in the heart of New York City, and is within walking distance to many theatres, concert shows and late night show venues.  The room at Le Bernadin has the same degree of extravagance as its surroundings outside, but is much more refined and very formal.  You will note that men must wear jackets, and many women wear formal dresses.  The words “pretentious” and “stuffy” come to mind, and despite having been to many restaurants of the same caliber, I could not help but feel self-conscious and uneasy.  The only thing comfortable about the experience was the swivel seats and the nice bench for my purse.

Service: What I have said above pretty much captures my thoughts on the service as well.  Although our servers were all extremely attentive, there was absolutely no “back and forth” between us, and I would have felt remiss for trying the ask any questions about the meal.  At other 3-stars, I have felt comfortable asking anything to the servers and even joking around with them, but the servers at Le Bernadin were very guarded and stiff.  The sommelier was not only “stiff” but downright rude in my opinion.  She seemed unimpressed with our wine selection (too inexpensive perhaps?), and when Hubby mistakenly coughed after having the first sip of our wine, she seemed quite offended and we barely saw her for the rest of the meal.  Some may say that this is what we should expect from French service, but we had much more pleasant dining experiences at Michelin restaurants in Paris.  So I don’t buy it.

Food: One cannot fault the food at Le Bernadin.  It is prepared to the highest standards, with the highest quality ingredients and superb technique.  There is no doubt that Eric Ripert is a master of fish, and makes it the highlight of every plate.  The ingredients he pairs with the seafood complement it perfectly and elevate its flavours.  His technique in preparing and cooking the fish is flawless.  But, just like the atmosphere and the service, there is a lack of imagination and personality.  Hubby and I left feeling as though we had seen similar variations of all of these dishes before and that no dish really left us feeling awed or inspired.  The seasonality of the dishes was also lacking, which is a shame considering the many summer ingredients available at the time of our visit.

Here is a look at the Chef's Tasting (prix fixe and a short "Le Bernadin tasting" also available).  I called ahead about my pescatarian request and they substituted some of the dishes on the other menus for the meat dishes (*). 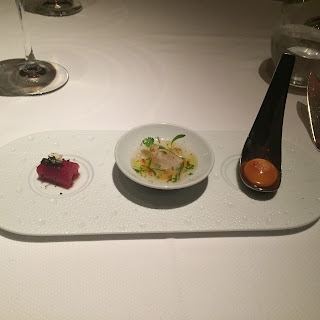 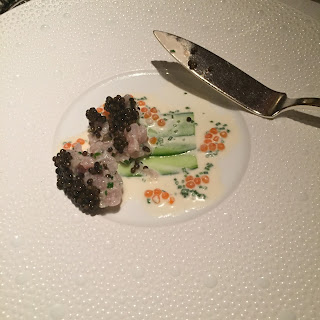 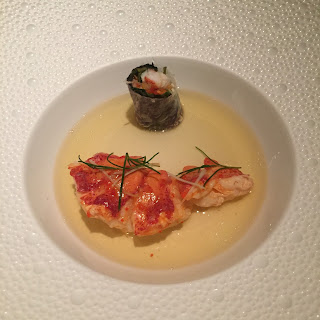 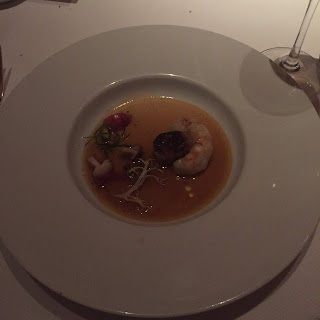 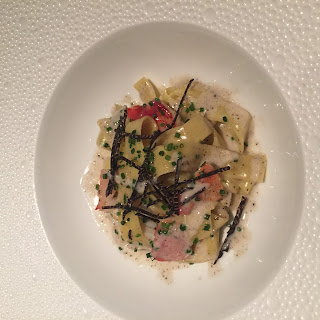 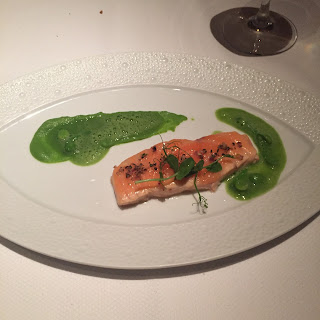 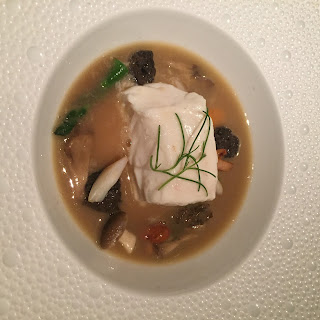 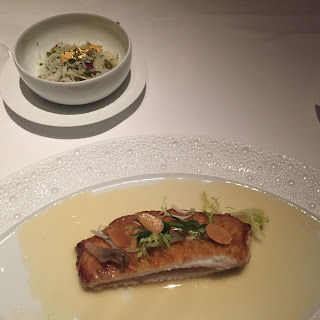 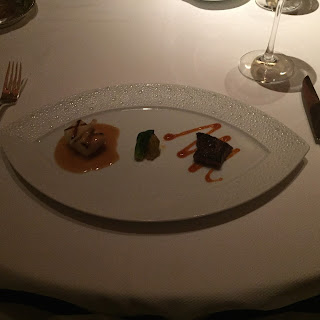 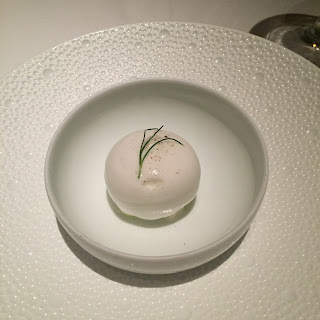 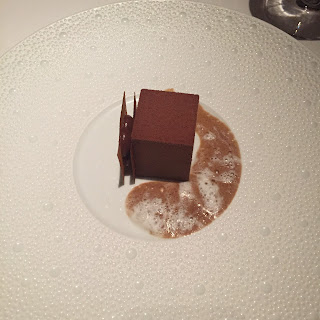 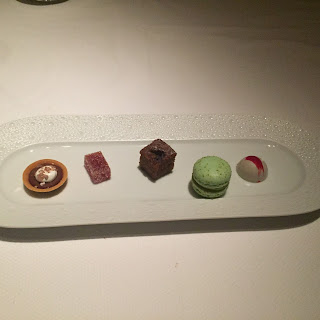 
While the food itself at Le Bernadin was virtually flawless in execution, the rest of the experience left a lot to be desired.  When I spend this kind of money on a dining experience, I expect to have a great time, but here at Le Bernadin, fun seems to be discouraged.  Perhaps this is this degree of formality and “perfection” is enjoyed by some, but I can think of many other similarly-ranked restaurants where I would rather dine.  This will be my first and last time at Le Bernadin.