Locavore Approved? YES (Chef Ned Bell is dedicated to the farm to table philosophy.  The menu includes many varieties and preparations of local fish and the vegetables choices reflected what is currently seasonally available)

My first visit to Yew was in November 2012 and unfortunately, it was not the best of brunch experiences to say the least (see my post here).  I vowed that I would not return.  Why waste time on an expensive restaurant that was such a let-down on the first go-around when there are so many other places on my Vancouver wishlist?  Since then, Hubby has been trying his darndest to convince me to give it another try and I understand why.  Seafood, locally-driven ingredients and, heck, they even have a vegan menu.  What is not to like about that, he asks?  He has been especially insistent for us to return after he went to Yew for a business lunch and had a pleasant meal.

So when my aunt came to town and was staying at the Fairmont in which Yew is located, I caved and suggested it as a option.  My aunt had to catch an early morning flight the next morning so it seemed as though the stars were aligning for a return visit.  And this is how it came to be.

I will start on a positive note, to say that Yew's service was second to none.  Our main server was very lovely, and was very patient in waiting to take our order while we busily chatted about all that had happened since we last met.  The rest of service, including refilling our water and wine, clearing our plates and time between courses was expertly done.

The atmosphere is also quite pleasant.  Although I had not historically been a fan of hotel restaurants, I have had to change my tune lately with the opening of some pretty special hotel restaurants (Hawksworth, Forage).  There is a nautical theme to the room which makes the otherwise formal room seem a bit more approachable and relaxed a-la-Vancouver style.  A nice place for a wide range of events, from business to celebration to a nice night out.

And now onto the most important part, the food. Unfortunately, this is where things start to take a negative spin.  I wanted to like the food, I really did, but the whole meal left me both confused and disappointed once again.  Keep reading to see what I mean.

Grilled asparagus salad- I was eager to try a dish off of the vegan menu as it is unusual to find a separate vegan menu at a fine dining restaurant.  I am glad that I knew about the vegan menu as it is a completely separate menu that we were not told about nor offered and I had to specifically request it.  Is it supposed to be a secret?  While the asparagus was beautifully fresh (I love asparagus season!), I could have taken or left the rest of the elements on the plate.  First of all, I do not think that avocado should ever be cooked (charred avocado, really) and I really did not enjoy the big blob of kale pesto underneath (the same, unfortunate pesto that later appeared on my main).  Although I love my green veggies, the concept of green on green on green was not visually pleasing nor tasty. 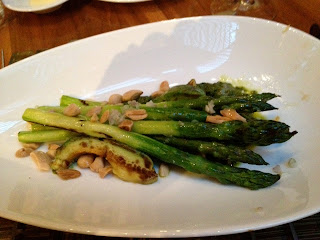 Lobster with watermelon- Hubby ordered this more out of pure curiosity than anything else.  He thought it sounded like an odd combo, but that maybe it was just crazy enough to work.  Unfortunately, the pairing of watermelon with lobster is just as wrong as it sounds.  Nothing in this dish worked, from conceptualization to execution.  A complete miss all around. 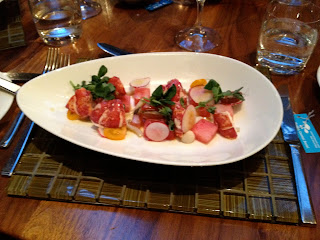 Caesar salad- Both of my lady dinner companions chose this classic salad as their appie.  They seemed to enjoy it well enough, but turned up their noses at the big pile of anchovies on their plates.  Although there is no doubt that some might enjoy anchovies on their Caesar, I must agree that the clunky pile of full anchovie fillets at the side of the plate was less than appealing and way, way too salty.  Also, I was puzzled by the grilled half lemon at the side of the plate.  It had no juice in it, so I am guessing it was just a useless inedible garnish? 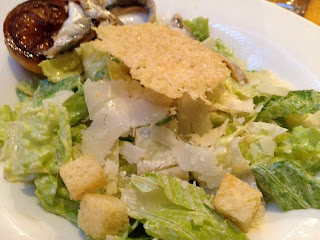 Pan-seared halibut with saffron risotto and kale pesto- When the server told us about us about this dish, the nightly special, I was very excited.  Risotto and halibut in the same dish, amazing!  Hubby thought the same, and, on this rare occasion, we actually ordered the same dish because it sounded so good.  After pretty subpar appies, we remained hopeful about this main- until we ate it, that is.  This was worse than subpar, it was plain old bad.  It lacked any kind of flavor, especially the risotto which tasted like cardboard.  The only redeeming quality was that the fish was decently cooked, but again it lacked seasoning.  Very, very disappointing. 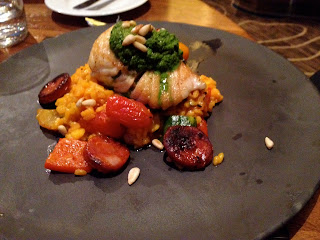 Westcoast Paella- This was my aunt's choice, and one that I also considered.  When it came out though, I realized that it may have been an even worse choice than my halibut dish as it appeared to be made with the exact same neon orange rice that my risotto was made of, and there was even more of it.  No thanks! 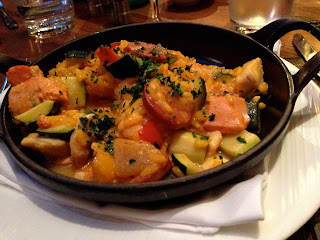 My other dining companions ordered the Grilled Salmon and the Grilled Trout.  While the fish was cooked very well (the salmon was perfectly medium rare), I again found some of the accompaniments somewhat peculiar.  Is that massive, plain piece of kale that takes up half the plate actually meant to be eaten or is it an oversized garnish? 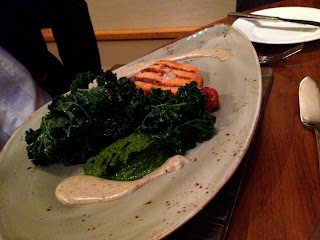 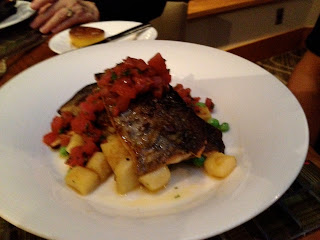 For the table, we also chose a few sides to share (not really necessary as portion sizes are decent), including the Lobster Hash (lots of tomato and potato, not much lobster) as well as the Kennebec Fries with lobster and bacon aioli (Hubby's favorite part of the entire meal).

I am very sorry to say that this will be my last visit to Yew, to which Hubby now agrees after that meal.   There are many other places in Vancouver that offer much better conceived and better executed food, especially at this price point.  Although I appreciate the local philosophy, it is just not enough to bring me back.  In this case, it is two strikes and Yew's out.

Posted by Little Miss Locavore at 17:10