Locavore Approved?  Enthusiastically YES (Very impressive use of seasonal, local ingredients from nearby Vancouver farms (both urban and rural) which she gives credit to up front in the dish descriptions.  Very commendable commitment to all that is local!) 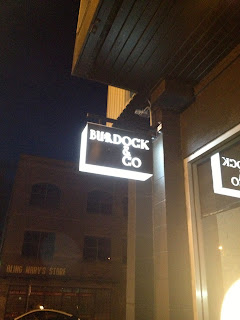 I found out about Burdock and Co. last week while looking reading a link I found on Twitter that was trying to predict the best new restaurants of 2013 as they stand to date.  As I read about its focus on local ingredients, ties to local farmers and veg-centric menus, I asked myself why it had not fallen under my restaurant radar???  I immediately found its website online and, seeing its very intriguing menu, it immediately moved right to the top of my "to-go" list and Hubby and I planned to make it our weekend pick.  I just could not wait any longer to see what this locally-driven joint had to offer.

Burdock is located on Main St., a neighborhood in which new restaurants have been popping up like "weeds" (budock is actually a type of weed!) over the past year (read Acorn, Grub and the new Graze).  It still maintains its hip persona but with perhaps a bit more charm.  And I think that Burdock has done an excellent job in creating a space that fits in well with the Main St. image.  The room is quite small, but the space is used well such that you do not feel as though you are sitting on top of your fellows diners.  There is a row of low seats by one wall and then a a higher table by the other wall.  Additionally, there are seats at the bar from where one can see the chefs preparing the food in the open kitchen (in retrospect, I wish that we had chosen a seat there).  The decor is hip and minimalist with a decent amount of plain wood that matches nicely with the farm-to-table concept.  My only criticism is that it was much too dark, to the point where it was difficult to read the menu or see the food (I am glad to have taken pics so I could see the dishes after the fact!). 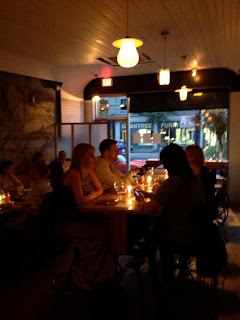 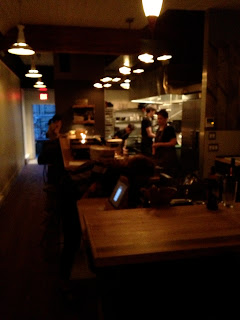 Service was both efficient and friendly.  This is a great place to go if you are hungry as the plates start rolling out of the kitchen pretty quickly after you order.  Our servers were very gracious and were helpful in helping up with dish selection.  Our water was always refilled (they have both still and sparkling filtered water for free) and our dishes were cleared promptly.  For such a new restaurant, I give them kudos for doing such a great job on service.

The menu at Burdock is all about shared plates made with locally sourced ingredients.  There is a good mix of vegetarian (including a good number of vegan dishes), seafood and meat dishes of all styles, from fried chicken to farro.  Their menu changes very regularly based on what is seasonally available (the online menu now has changed quite a bit since we were there last week) and, as stated above, there is an earnest focus on locally-sourced ingredients.  I knew that I was in good hands when I walked in and saw several crates of fresh strawberries sitting on the bar, just like the ones that I had bought at the market earlier that day!  They also do a lot of pickling so that they preserve foods with a short growing season well and use them in the coming months.  I felt that the menu was very well conceived and the constant addition of new dishes makes this a place that I would want to visit again to see what else they can come up with.

Burdock also has a nice variety of alcoholic and non-alcoholic drinks to complement its tapas-style menu.  Being Little Miss Locavore and all, I felt that it was only right that I order the Seasonal Garden-Slug from their succinct cocktail list.  Although presented very simply, this little drink is surprisingly in flavor.  The taste changes as it moves through the mouth, from sweet at first and then ending with a hit of sour from the lemon.  It is extremely well-balanced and light, perfect for summer.  Hubby chose a nice Californian beer. 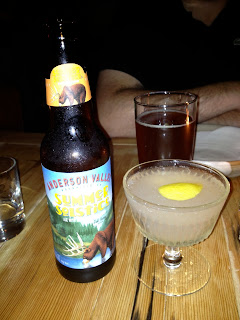 Then shortly after, our meal began!  Here is the lowdown:

Shaved asparagus and arugula salad with Urban Digs Egg- This dish had the potential to be boring but instead, it packed a surprising amount of flavor for such a little plate of food made with such simple ingredients (a trend that fortunately lasted throughout the meal).  The asparagus was shaved into clean thin strips and dressed in a very well-balanced vinaigrette.  The egg overtop was delicious and almost cooked perfectly (maybe just a tad overdone, I like a really runny yolk!) added both texture and flavor.  I love how they gave credit to Urban Digs Farm, a local farm in the Vancouver suburbs, for their contribution (see their website here). A very pleasant summer dish. 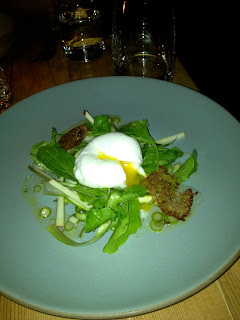 Wheatberry Risotto- This was a nice unique play on risotto, using wholesome wheatberries instead of arborio.  I loved the chewy texture of the wheatberry, but Hubby was not as big of a fan (just a personal preference).  There were a few mustard greens on the top for color (would have liked more!) and there were some cubes of sunchoke mixed in with the risotto.  The menu description also listed olives as a component although we are pretty sure that there were not olives in our portion.  The real star of this dish was the smoked crema which was absolutely delicious.  Again, they gave a shout-out to a local producer, Farmhouse Natural Cheeses (find out more here) who provided the cheese that was shaved over the dish. 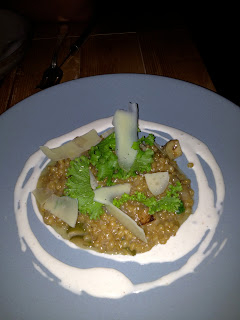 Fire-roasted Farro- Although we had just eaten the risotto and considered the fact that another grain dish might be a bit redundant, I had read good reviews of this dish in particular and decided to go for it.  I am not sure that I got much of a "fire-roasted" flavor from the farro, but what I did love about this dish was the dish was the amazing black garlic puree (I licked every last drop off the plate).  I also appreciated the addition of the seasonal fiddleheads, although I would have preferred them had they not been pickled (although I can appreciate that this is how they capture flavors of short-season ingredients).  This was a thoughtful vegan dish. 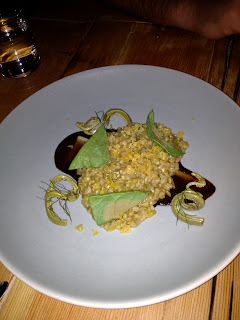 Fried Chicken and Pickles- After a string of preceding vegetarian and vegan dishes, it was time for Hubby's pick of the night.  This is apparently one of the more popular dishes on the menu, and Hubby really enjoyed the dish.  He especially loved the individual morsels of crispy chicken skin that were scattered between the juicy pieces of chicken.  I tried some of the pickled vegetables on the side and they were lovely (very pretty colors too!).  The bonus to ordering this dish was that a dollar went to Growing Chefs, a local charity that teaches elementary school students about the importance of local food by pairing them with volunteer chefs (see more here).  Love this idea! 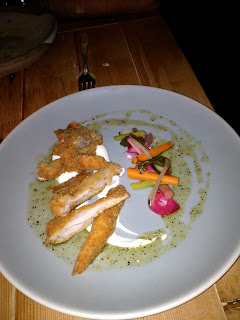 Spring Cassoulet-  I decided to order this one at the last minute after we had eaten the other dishes and I still felt that a little protein was in order.  This was a vegetarian play on the traditional french cassoulet, made with several types of meat and beans.  This was a much lighter, vegetarian version that was made with cranberry beans (the type of bean changes depending on what is seasonal) and julienne cuts of smoked tofu (Hubby, a total non-tofu eater, even admitted that this was darn tasty!).  There were also a few shiitake to add a bit more meatiness, some small broccoli florets (not listed on the menu but much appreciated) and beautiful, seasonal green onion.  Thank goodness I made the last minute choice to order this dish, as it was my favorite of the evening and was the perfect dish to fill my belly with all of its "meaty" elements.  And, funny enough, meat-eater Hubby could not deny how great it was! 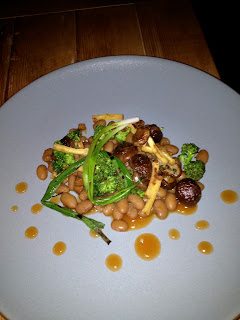 All in all, it was a lovely meal with a very impressive number of local elements.  A word of warning though- do not expect to be stuffed when you leave.  I am not saying that this is a bad thing, but it is just something to be aware of.  I think this is the ideal place to go for drinks and shared plates after having a big brunch or a late lunch when you just want a light meal.  With such a great food philosophy, I look forward to see what that this newly-opened restaurant has in store for local lovers like myself and so many other Vancouverites!

Posted by Little Miss Locavore at 15:54