Good Beer and Beyond at The August Jack

Locavore Approved? YES- The August Jack makes a conscious effort to use locally sourced, organic ingredients.  As noted on its website, the chef chooses meat that is ethically and organically raised, and its seafood is sustainably harvested.  Our server told us that the tapas menu is constantly being tweaked to keep up with the changing seasons.  While they offer beer and wine from all over the world, they offer an excellent selection of local varieties.

After a long day stuck inside at work, I felt the need to venture out for a walk with Hubby in search of a nice, casual place to enjoy a low-key dinner.  Since it was already 9:30 on a Sunday night, our choices were certainly more limited.  Fortunately, after pulling out my phone to consult my list of "to go" restaurants, I spied The August Jack which, unlike most restaurants in Vancouver, actually stays open past 10pm (they do not close until "late" according to their website).  And so off we went for a brisk walk down its location at West 4th and Maple.

The August Jack, which opened last July, is Vancouver's only craft beer pairing restaurant.  They specialize in tapas and also have a small selection of mains.  Each dish on the menu has a suggested beer pairing which makes for a refreshing change from the run-of-the-mill wine pairings.  The chef, Benjamin Curtis, hails from Halifax (a fellow East Coaster!) and has a blog on which he posts updates about their regular pairing dinners highlighting local breweries.

I found the atmosphere to be very pleasant.  It had the laid back vibe of a pub but at the same time had a bit of a more intimate quality that made it a great choice for a night our with Hubby.   There is a variety of seating options available, from low tables, to high tables, to booths for larger groups.  There is also a very handsome bar with ample seating surrounding it. 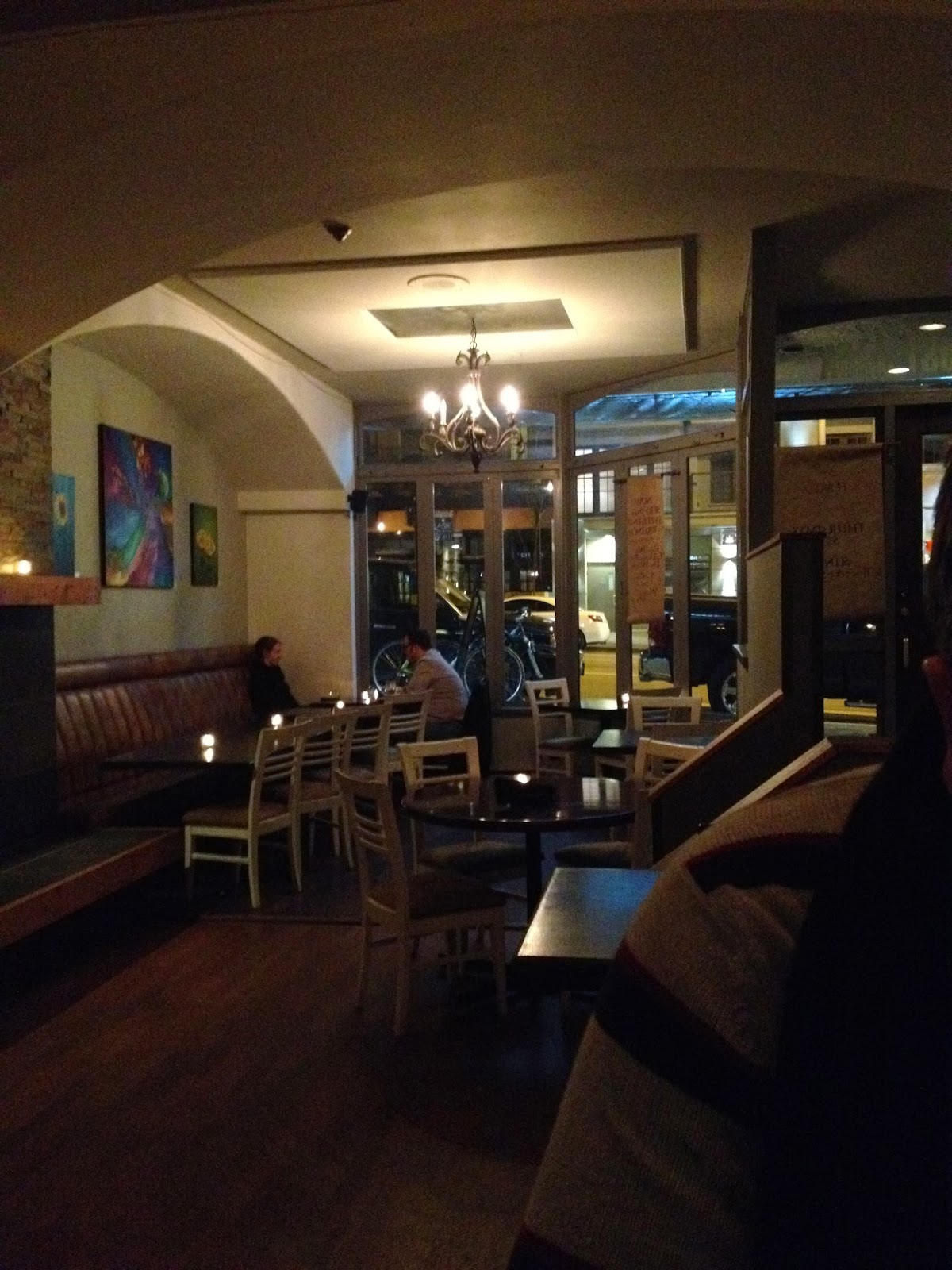 Our server was very enthusiastic and gave us a nice introduction to to restaurant and the menu when we  told him that it was our first visit.  He was eager to help us with beer suggestions and pairings if we were not keen on the suggestions listed beside the dishes on the menu.  The only part of service that left us scratching our heads was that, despite being one of only 2 couples there at 10pm on a Sunday night, we waited almost 30 minutes for our food to appear after ordering.

While we waited (and waited) for our food, I enjoyed a glass of Bartier Brothers 2012 Gewurtztraminer  from the Okanagan.  It was the first time that I tried a wine from this winery and I was very impressed.  Hubby ordered a Blanche de Chamblay as it was the suggested pairing with his tapas.

Hubby ordered two tapas- the Truffle Popcorn and the Rare Seared Albacore Tuna.   He absolutely devoured the generous bowl of popcorn, with its truffle-infused popcorn and shaved grana padano.  While he enjoyed the flavours of the onion-orange reduction on the tuna dish, the fish itself was a tad overcooked. 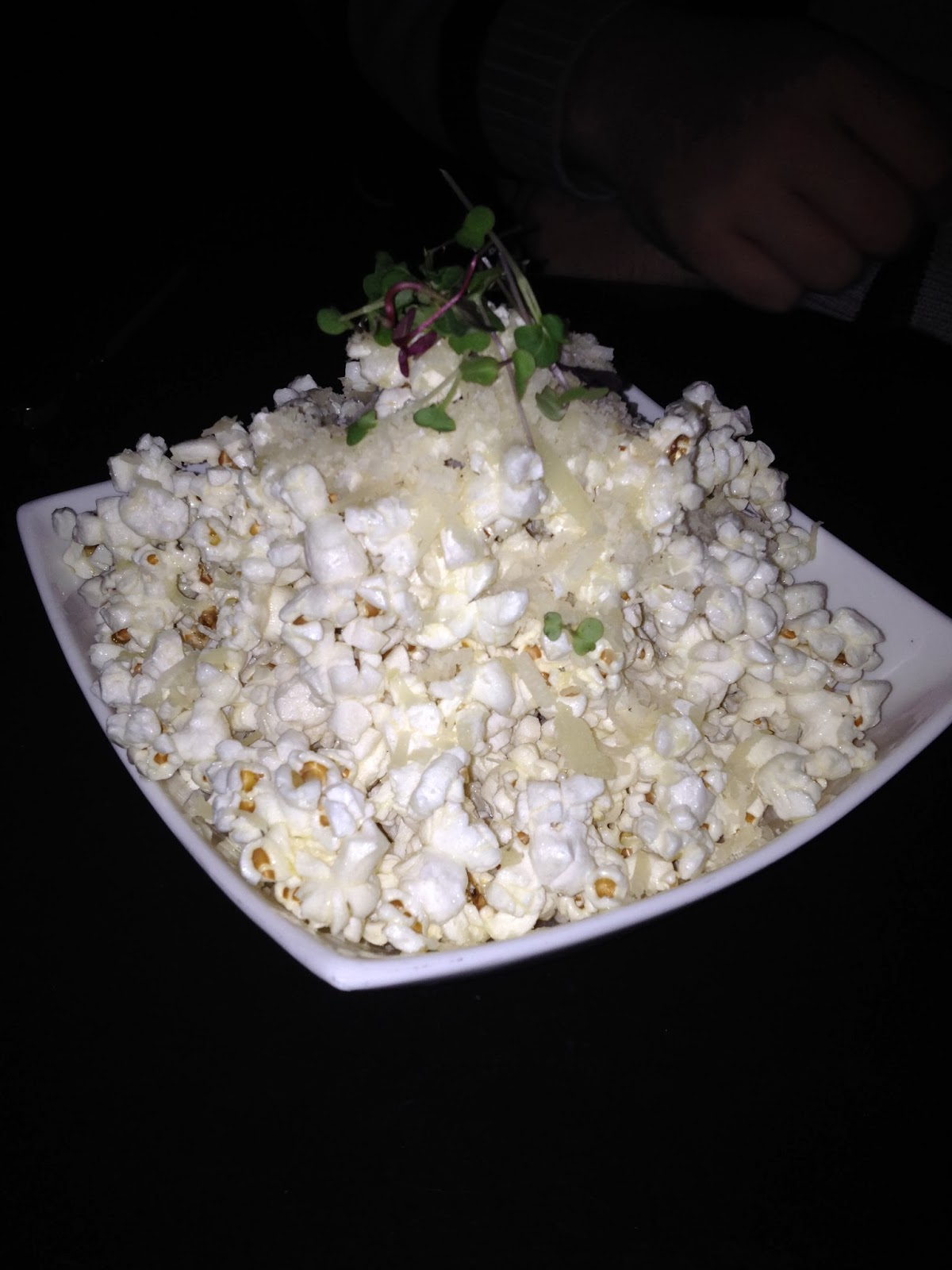 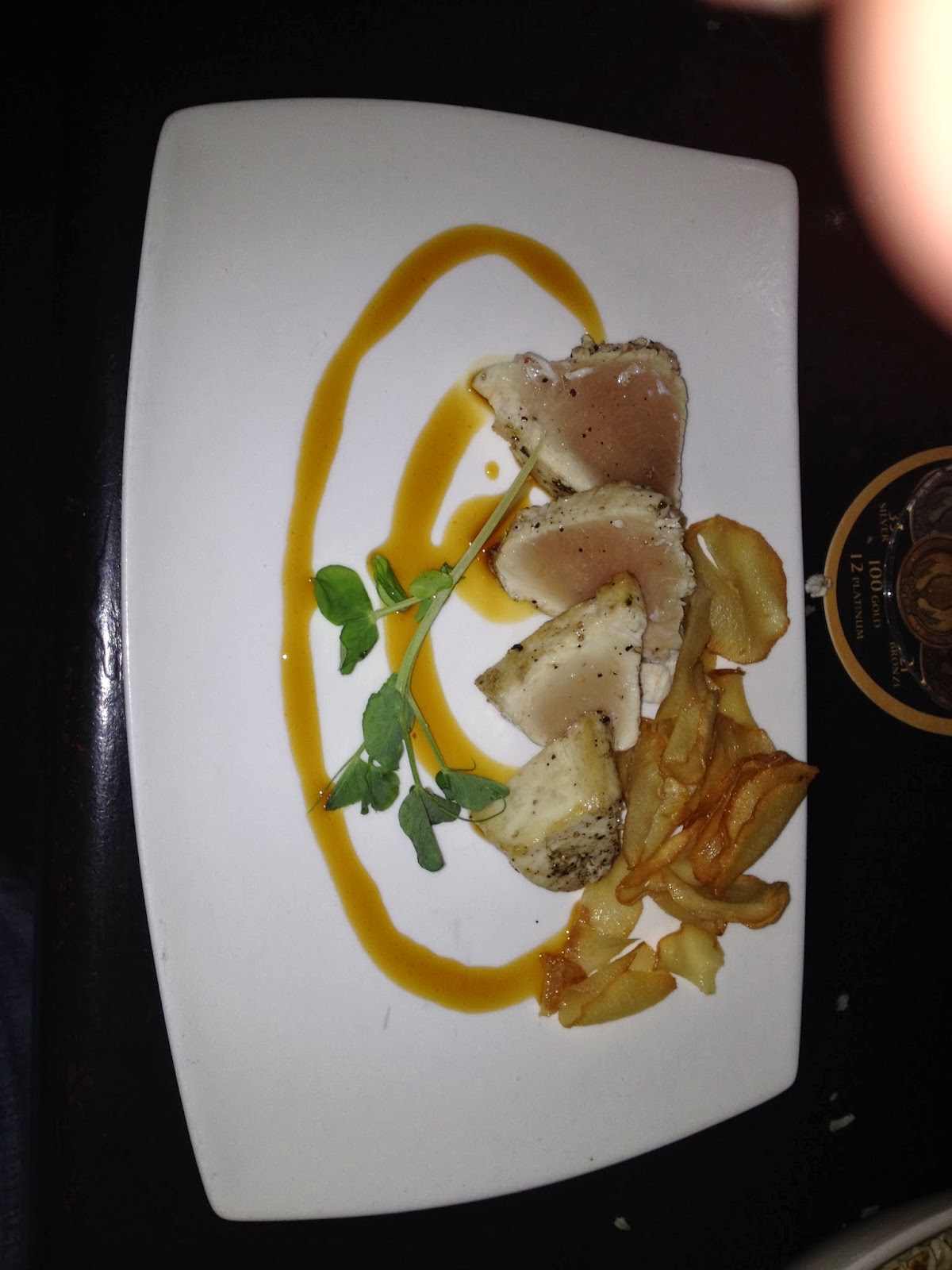 I spotted my choice of dish within seconds of looking at the menu- the Quinoa Cashew Squash.  While I thoroughly enjoyed the dish, it was certainly not what I expected on reading the menu description.  What came on the plate was a small piece of squash with a few tablespoons of quinoa and diced cashews. The rest of the dish was comprised of a very tasty medley of green beans and mushrooms and some nicely seasoned baby potatoes.  While I was a bit disappointed that there was not more squash and quinoa, I certainly appreciated the flavours and the seasonality of the other veg.  All in all, a very nice vegetarian dish. 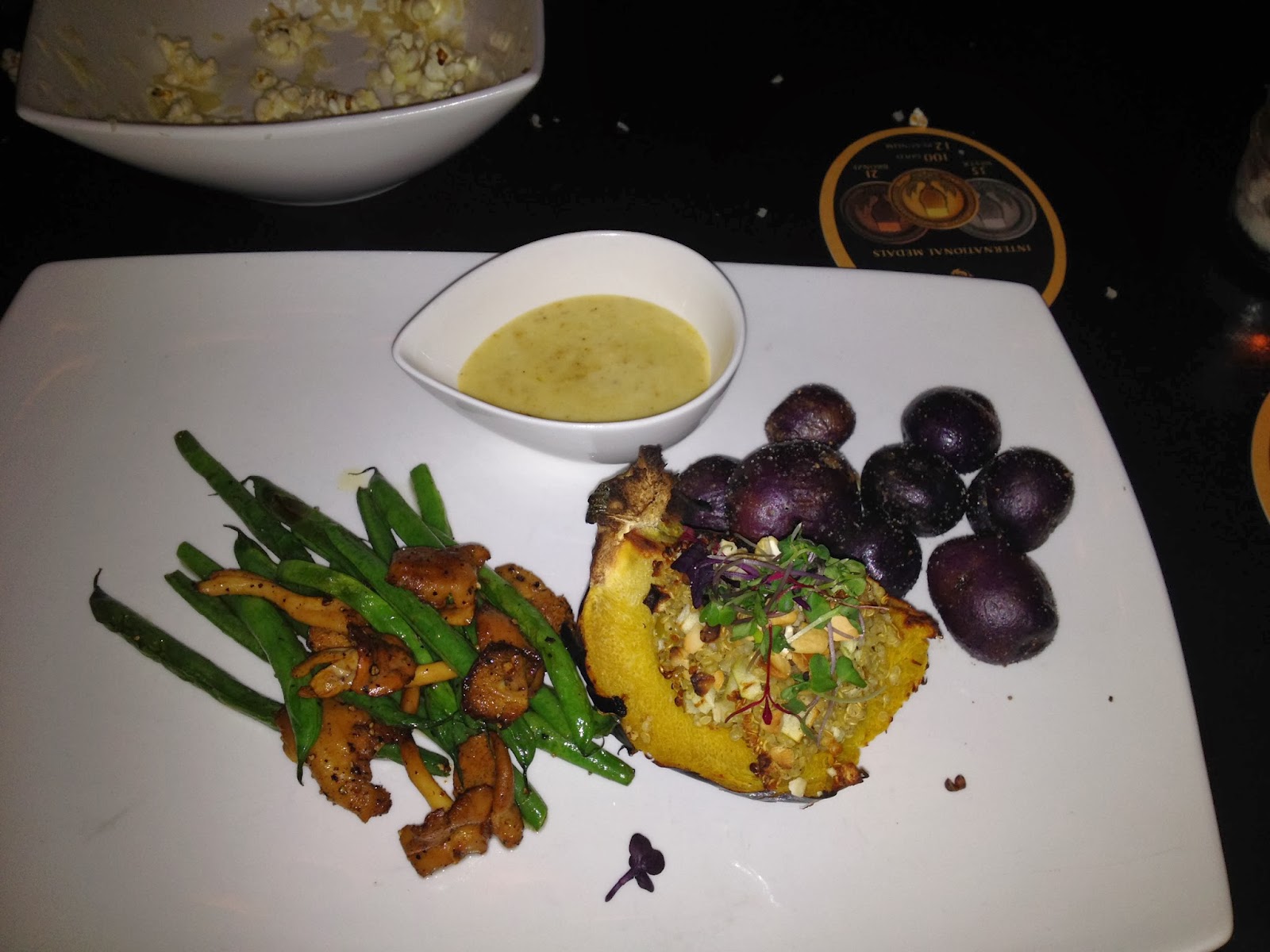 Although we enjoyed the food, the prices were a bit steep in my opinion.  The mains are $20-30 and tapas $6-18 (prices as compared to those online), which is a bit more than I would expect for this casual, pub-like atmosphere.  Also, the food tended to be "aggressively seasoned" (aka. very salty) which may be a "pro" for some and a "con" for others.

Overall, we quite enjoyed our experience at August Jack and would return if the opportunity arose.  The place was pretty empty on the night of our visit, which was hopefully more the exception than the rule.  With any luck, the word will spread that August Jack serves respectable food and drink that is worthy of a visit.

Posted by Little Miss Locavore at 22:47 No comments: