Just Can't Get Enough of Fable

OK, so I know what you might be thinking- hasn't Little Miss Locavore already blogged about Fable before?  Several times?

The answer is yes.  And, while I am not usually in the business of doing multiple posts on the same restaurant, I feel compelled to sing the praises of Fable each time I go because it is just THAT GOOD.  And, as impossible as it may be, it keeps getting BETTER with each visit.

The other reason for the repeat post is that I had a bit of a different Fable experience this time around in that I went with a large group of friends and had a set menu.  At first, I must admit that I was a bit skeptical of the set menu set-up, having been to group dinners at other restaurants before where the food just seemed mass-produced and boring.

But this was not at all the case at Fable.  Instead of receiving ho-hum, cookie cutter food, we were treated to what I would consider as Trevor Bird's "greatest hits", many of which were served family style so that we really got a sense of the magic that Trevor and his team have up their sleeves.  And believe me, every single one of our tastebuds were awed and amazed.

What I was also very impressed by was the quality of the service.  With such a large party, plus a near full restaurant otherwise, things have the potential to go sideways but not at Fable.  Our servers were cool as cucumbers as they took our orders, brought our beverages and food and even honored our every request.  They even took the time to chat with us for a short while and give us menu suggestions. If I did not know better, I would have said I was at a best friend's dinner party.

Although I decided it best to make it a "no-booze" night (had a 24-hr shift coming up the next day!), many at the table were not as boring as I and chose cocktails and wines from Fable's thoughtful beverage list.  The cocktail list is sure to please all-comers, with quite an extensive list of creative cocktails including alcoholic and non-alcoholic.  The wine list includes a vast selection of BC wines by the glass and bottle for decent prices.  I cannot wait to imbibe the next time! 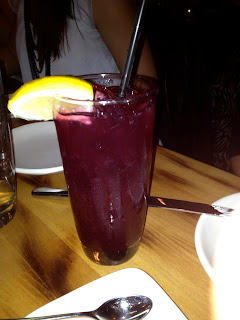 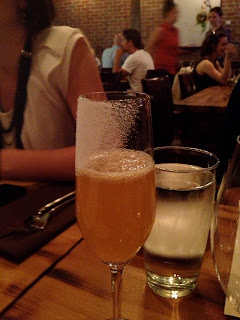 I will not go into too much detail about each dish, as I have already described most of them in previous reviews (see here).  Plus, why would you want to torture yourself by reading about them when you can go and taste them all for yourself?

Our meal started with White Cheddar Cornbread (the special bread of the day) which was perfectly crispy on the outside and soft on the inside, with the perfect amount of cheesy goodness baked in.  I am not usually one to dig into the bread bowl, but there was no way I was missing out on this! 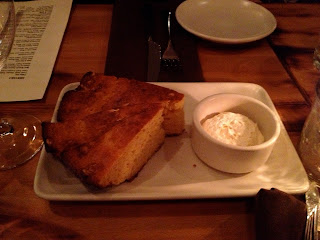 Don't you just love getting an appetizer before the appetizer?  I am not usually an Oyster fan, but because I do not honestly believe that anything bad can come out of Fable's kitchen, I dressed both in the accompaniments of grapefruit+orange segments and pickled horseradish and confidently knocked them back.  Good call on my part- the pairing of the citrus and oyster was divine! 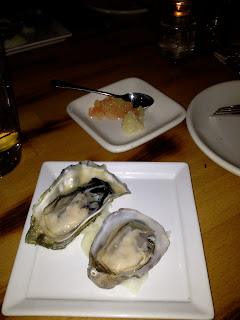 I have had the Chickpea Fritters many times and it never ceases to amaze me how sinfully delicious these are!  The oh-so-crispy exterior will send shivers running through you, as will that creamy, cooling sauce and the tangy pickled onions. 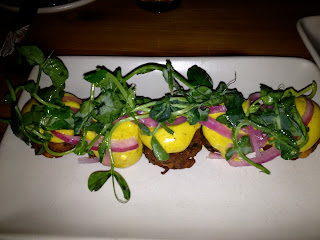 Perhaps one of Fable's most famous dishes is the Canned Tuna, a dish that Trevor Bird prepared during his very successful showing on Top Chef Canada.  This little pot from heaven, made with fresh tuna poached in olive oil, is something that every human being should have on their bucket list to try before they die.  They have had it on the menu since they first opened and, based on its rave reviews, I do not see it disappearing any time soon:) 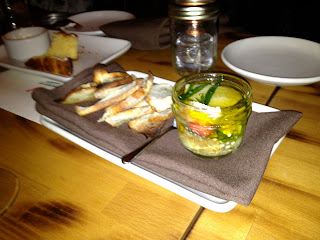 The third and final family-style appie was the Flat Bread, a perfect sharing plate topped with kale, mushrooms, pearl onions and bacon.  Here is what was left of ours after only a few minutes. Lucky I snapped the pic when I did! 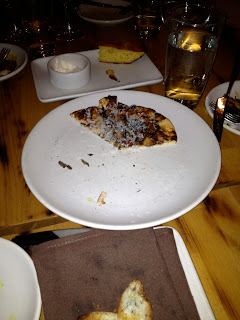 The tasting dinner's main dishes are served individually and there is a choice of four options.  Although the fish I had on my last visit was exquisite, I decided to see go veggie-style and order the Gnocchi.  And was this ever a smart move.  The gnocchi were panfried in pesto so that they really took on a deep, herby flavor.  The texture was what really did it for me- crispy on the outside and soft and chewy on the inside.  The little pillows were dressed up for spring with seasonal veggies including, peas and pea shoots, a beautiful pea puree and meaty mushrooms.  This is spring comfort food at its finest! 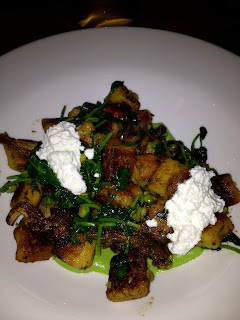 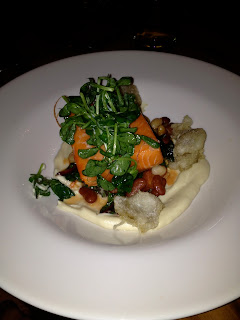 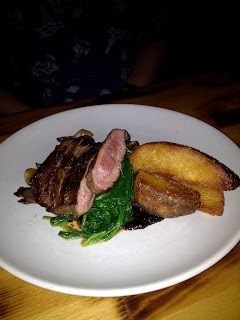 Others at the table enjoyed Slow Cooked Spring Salmon (I had a taste-sublime!) and the Steak Frites (those triple cooked potatoes are something, let me tell you!).

As with the appies, dessert was presented family style, and consisted of Gorgonzola Cheesecake and Lemon Meringue Parfait.  Although everyone was admittedly pretty stuffed by this point, these disappeared in record time.  Way to end with a bang!

I agree 100% with the multiple foodie awards that Fable has received for "Best New Restaurant", but I would take it a step further and call it Vancouver's best restaurant overall.  Fable has the whole package - amazing food most importantly, for good value, prepared and served by people who seem genuinely passionate about what they do.

Hats off to you, Fable.

Posted by Little Miss Locavore at 13:08