Locavore Approved? YES- Fortunately, we visited Au Comptoir when the menu had just changed to reflect the current seasonal produce (jeruselem artichoke, mushrooms and potato were front and center).  Additionally, there was a daily appetizer special which happened to be an oysters from the Gulf Islands.  Glad to see that, although they are decidedly french, they are still dedicated to using fresh, local West Coast ingredients. 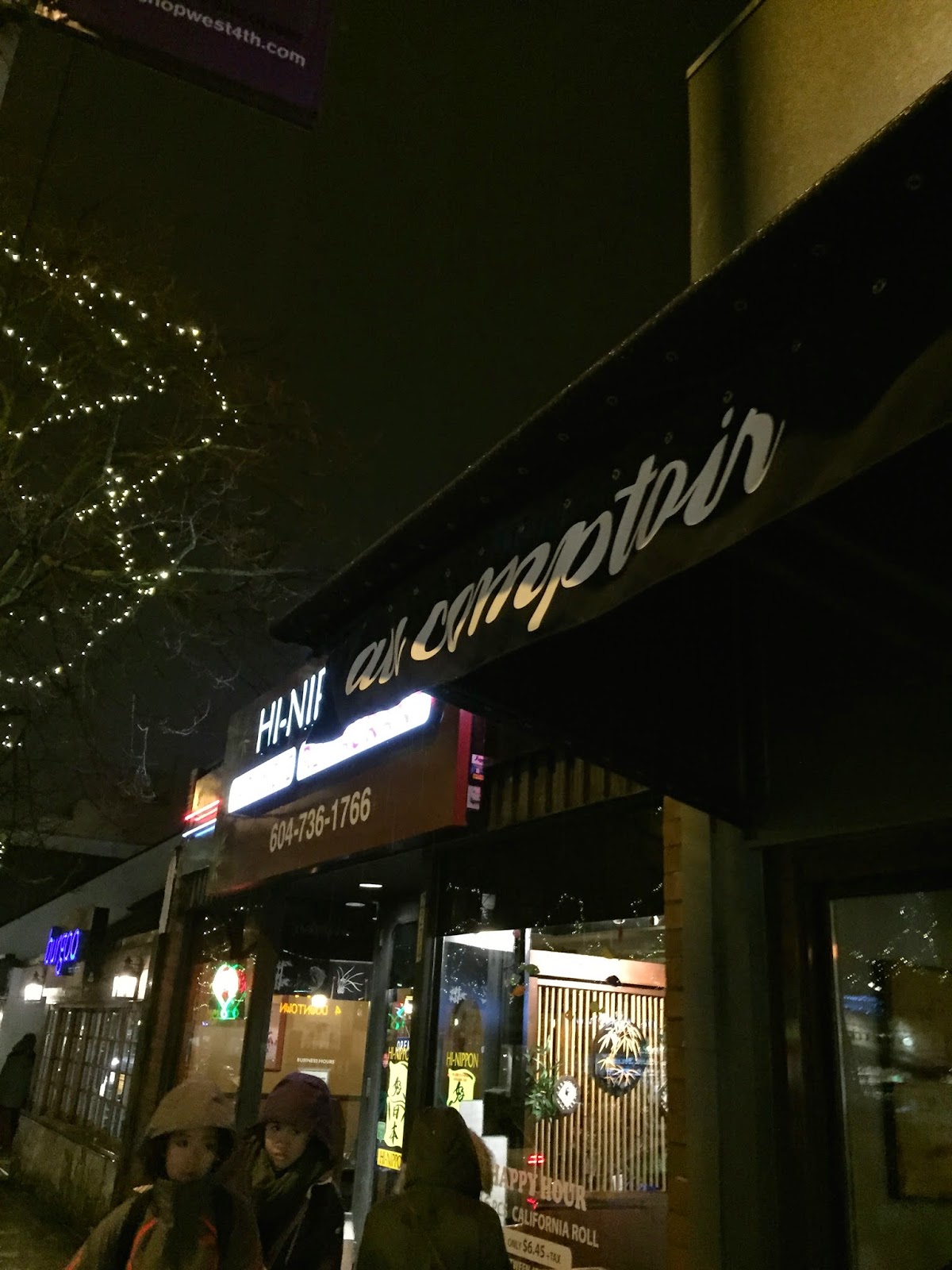 After our first trip to Faux Bourgeois a few months ago (see here), we were super excited to learn of the opening of a new french bistro in Kits, Au Comptoir.  Even more exciting is that the masterminds behind Au Comptoir happen to have connections to Faux Bourgeois as well as restaurants in Paris (the real deal!).  When they first opened in late 2014, they were the hottest ticket in town.  We decided to wait for the hype (and the lineups) to die down before checking it out and headed down with 4 friends on a Saturday night in early January.

We arrived at 8:30pm during Dine-Out Vancouver in the hopes of shorter wait times since it was not a participating restaurants.  It was a good idea in theory but proved not to be the case.  There was a large group of people waiting inside the door and a waitlist board inside showing quite a few large groups ahead of us.  They close at 10pm so we were told that we would likely not get in.  Regardless, we persisted and said that we would take out chances and head to Brown's Social House next door for a drink.  The front of house told us to check back every 15 minutes which ended up being great advice since, within 30 min, many people had given up and we snagged a great table for 6 by the window.

Inside, it is hard to believe that you are still in Kits.  We had all been to Paris within the past 2 years, and could picture ourselves right back there at Au Comptoir.  On one wall is a beautiful tin bar that was built specifically for the space in France.  On the other wall are unique custom-made tables made from sewing machines (how chic!).  The whole space, from the furniture to the washrooms to the rotating dessert display, brought us back to the "city of love". 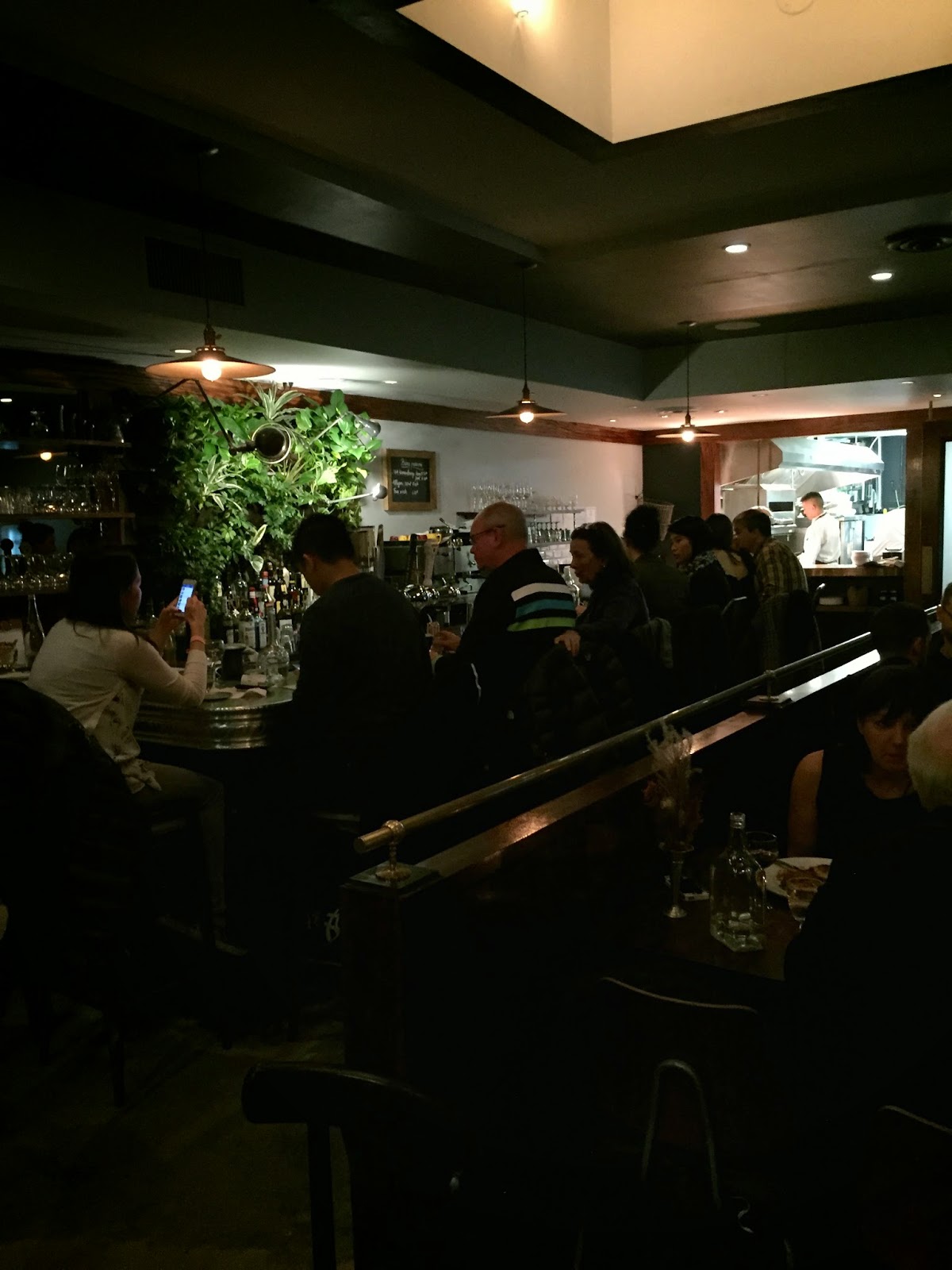 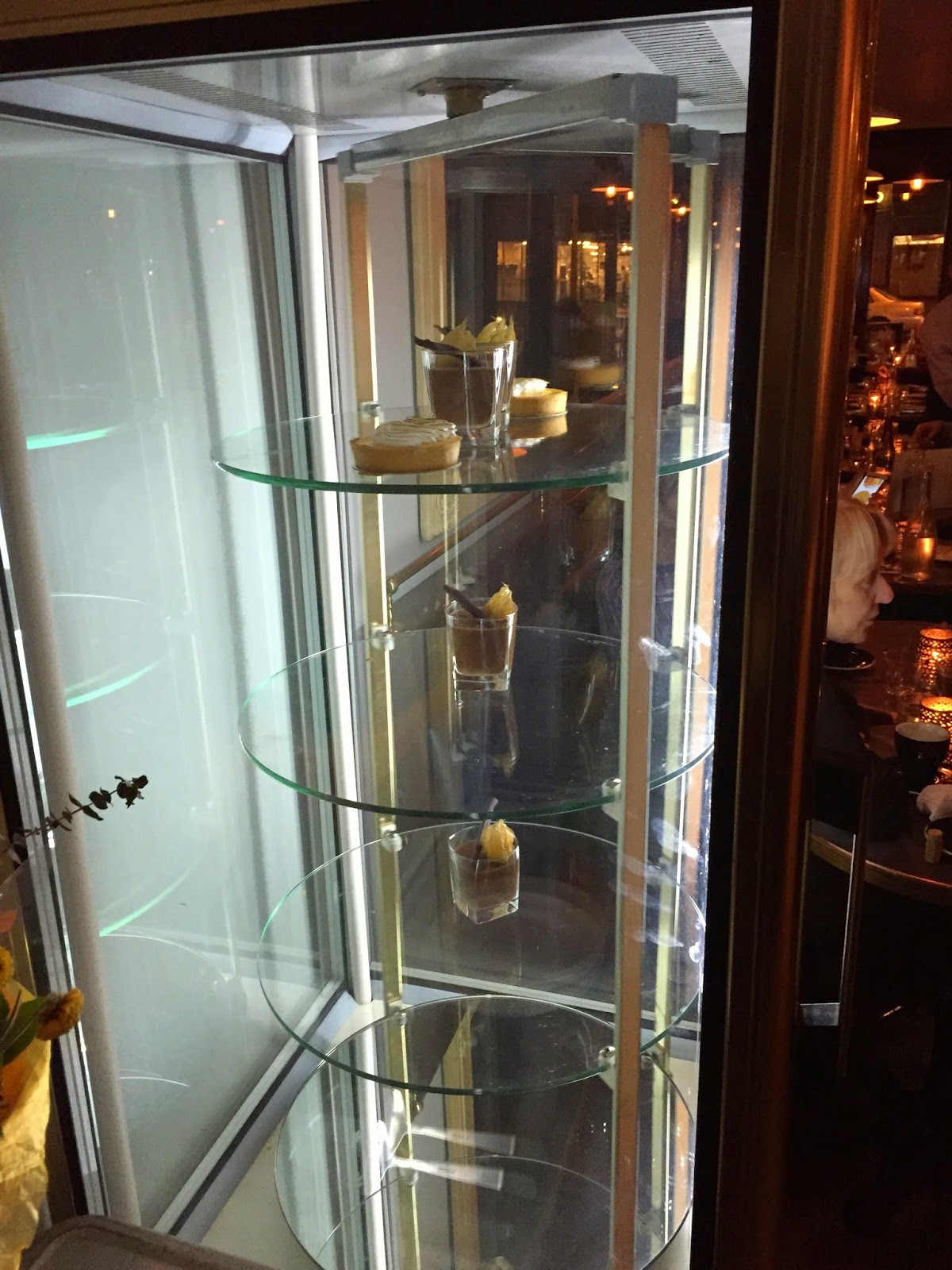 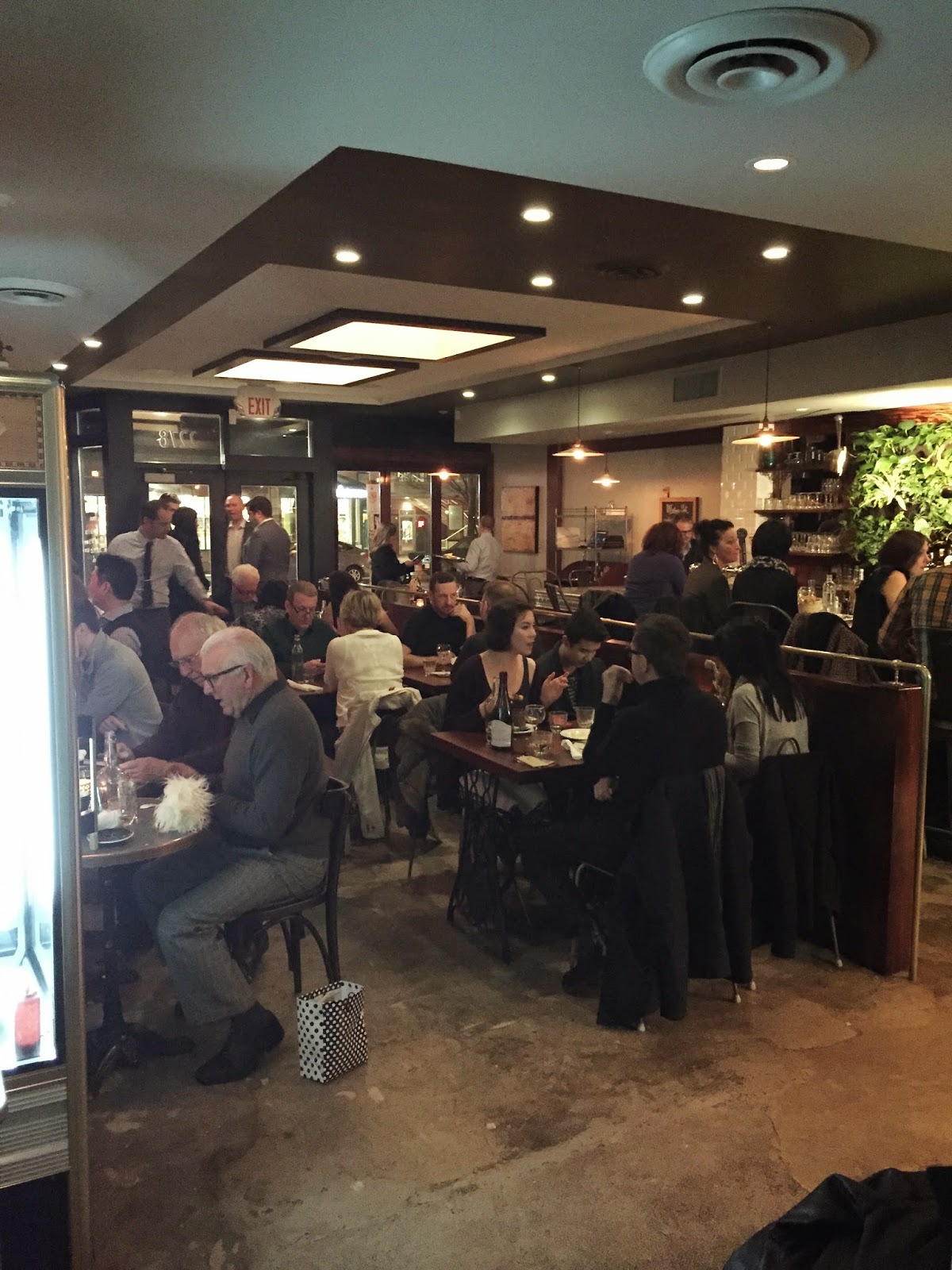 And it is not only the space that is truly French but also the style of service.  They are modelled after a Parisian cafe, open from morning to night and take no reservations which is becoming the norm here in Vancouver anyway (as per their website, "everyone is a VIP").  As would be expected in France, our server was charming as they come.  From his Parisian accent, to his wittiness to his sincerity, he had it all.  Those expecting the stereotypical rude French service, will be pleasantly surprised!  Even though we were the last table of the evening, we were never made to feel rushed and even when we left well past 10pm, there were still tables enjoying wine and good company.

Au Comptoir has separate menus for breakfast, brunch (on weekends), lunch and dinner.  The dinner menu is straightforward, with 8 or 9 each "entree" (appetizers) and "plats principal" (mains).  They also have a nice wine menu with choices at a variety of price points and a small cocktail menu. 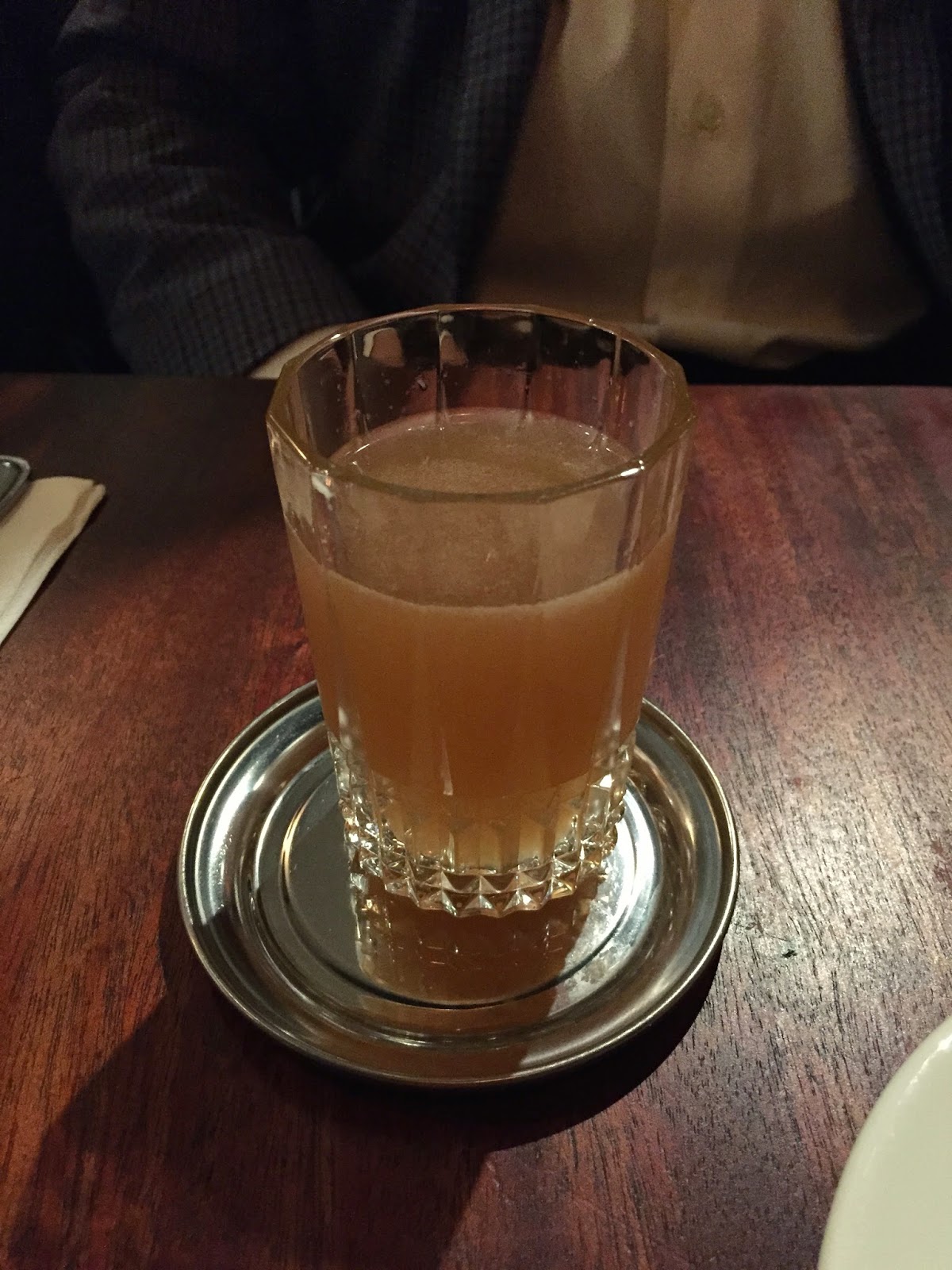 Bread (complimentary)- What french meal is complete without it? 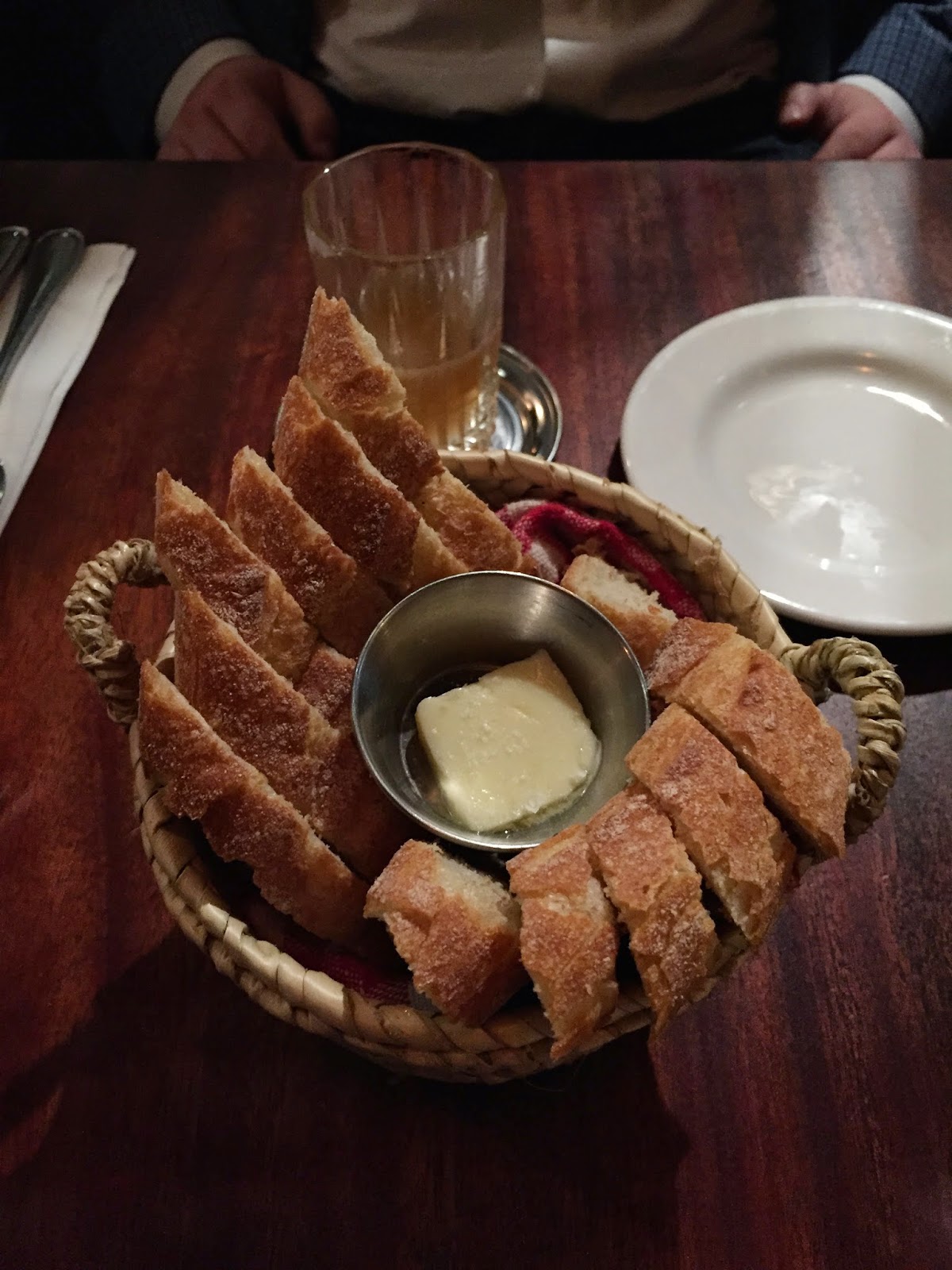 Assiette de Salmon Fume- This was much more exciting than your average smoked salmon and crackers, with a luscious jeruselem artichoke puree at the base, topped with a generous portion of smoked salmon and crunchy fresh radish.  The sprinkle of fresh parsley added a nice burst of freshness. 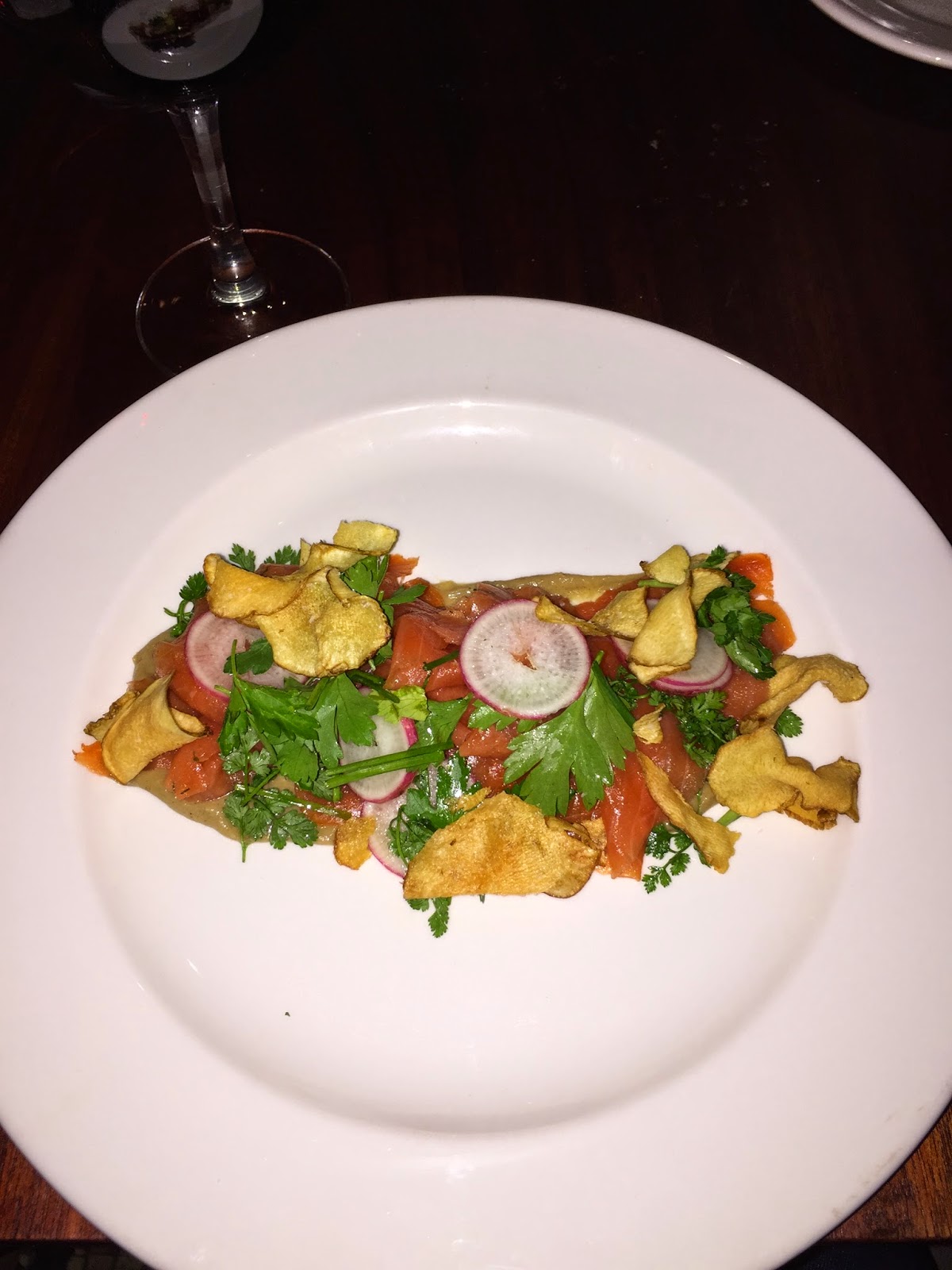 Salade verte- Very simple with nothing other than a mix of fresh greens but perfectly dressed and a light start to a meal. 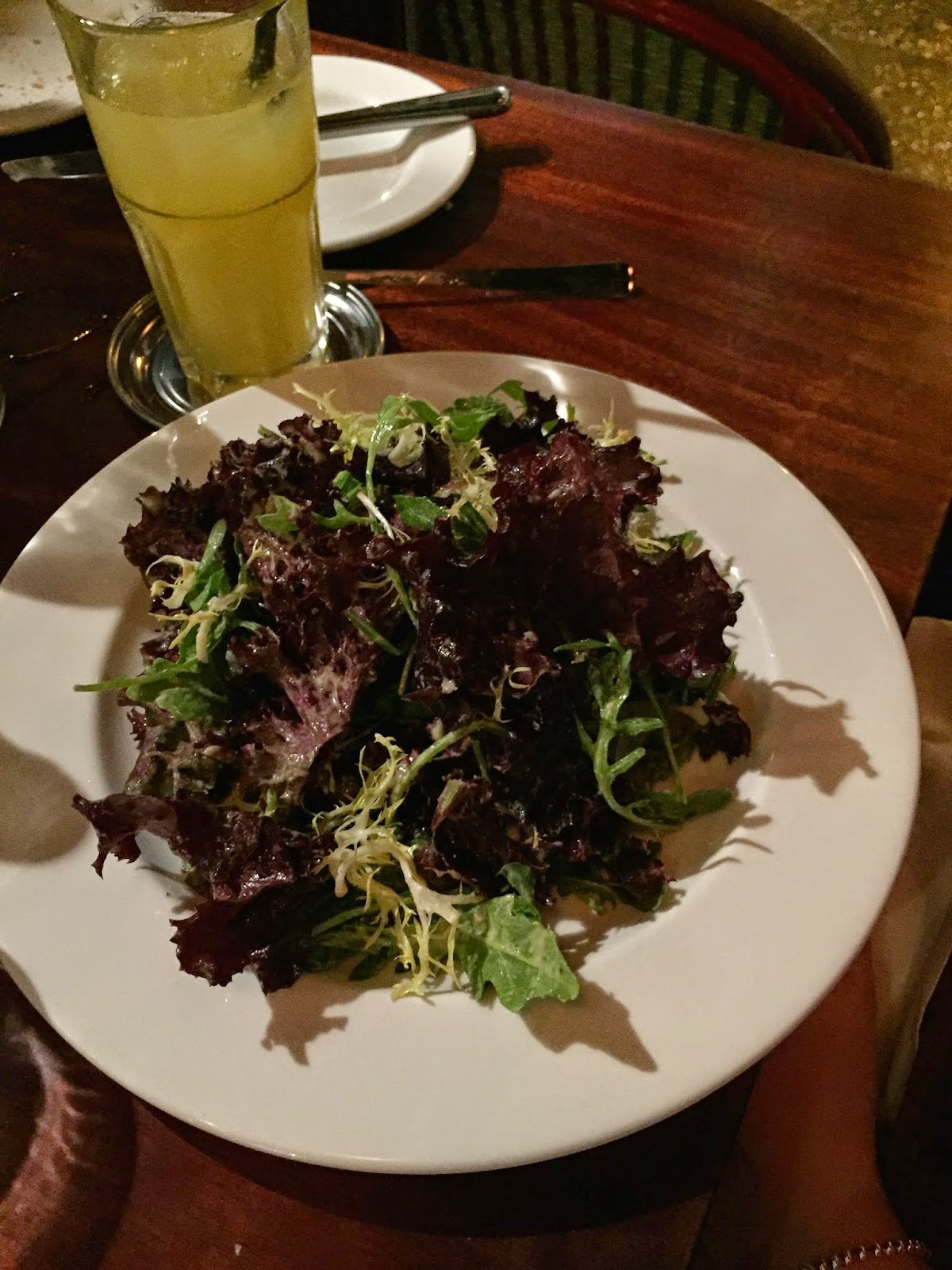 Duck liver mousse (appetizer special)- This one garnered mixed reviews at our table, with one couple  "comme-ci, come-ca" and the other giving it a thumbs up. 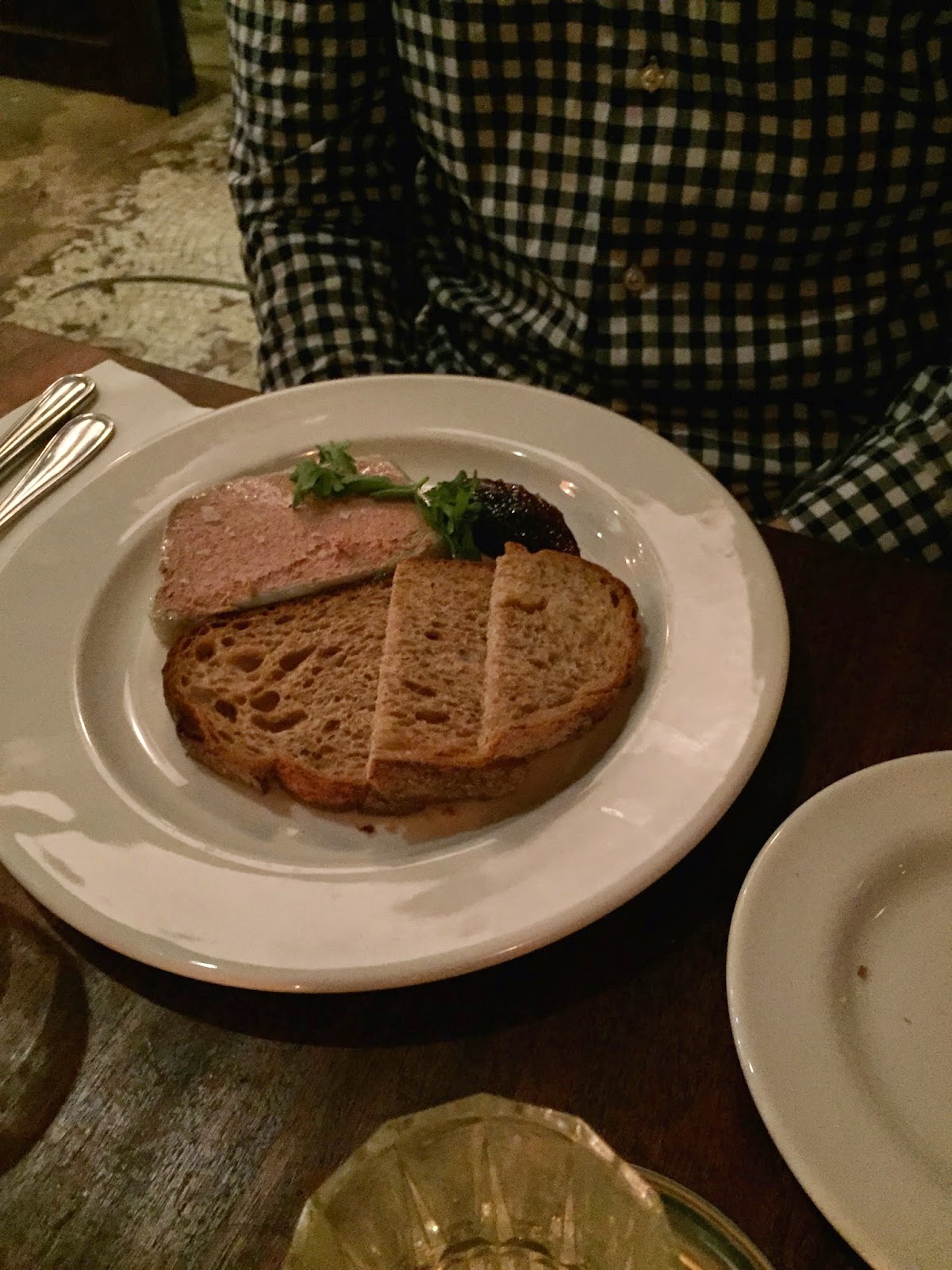 Local oysters (special)- These beauties were straight from the Gulf Coast and served with a pleasant nice mignonette.

Poelee de Saint-Jacque- This was my pick, and ended up being a great choice.  The beautifully seared scallops were served over a bed of lentils.  Underneath is a parsley puree (isn't it pretty?).  A little more seasoning would have been nice (the lentils were a tad bland) but otherwise it was expertly executed. 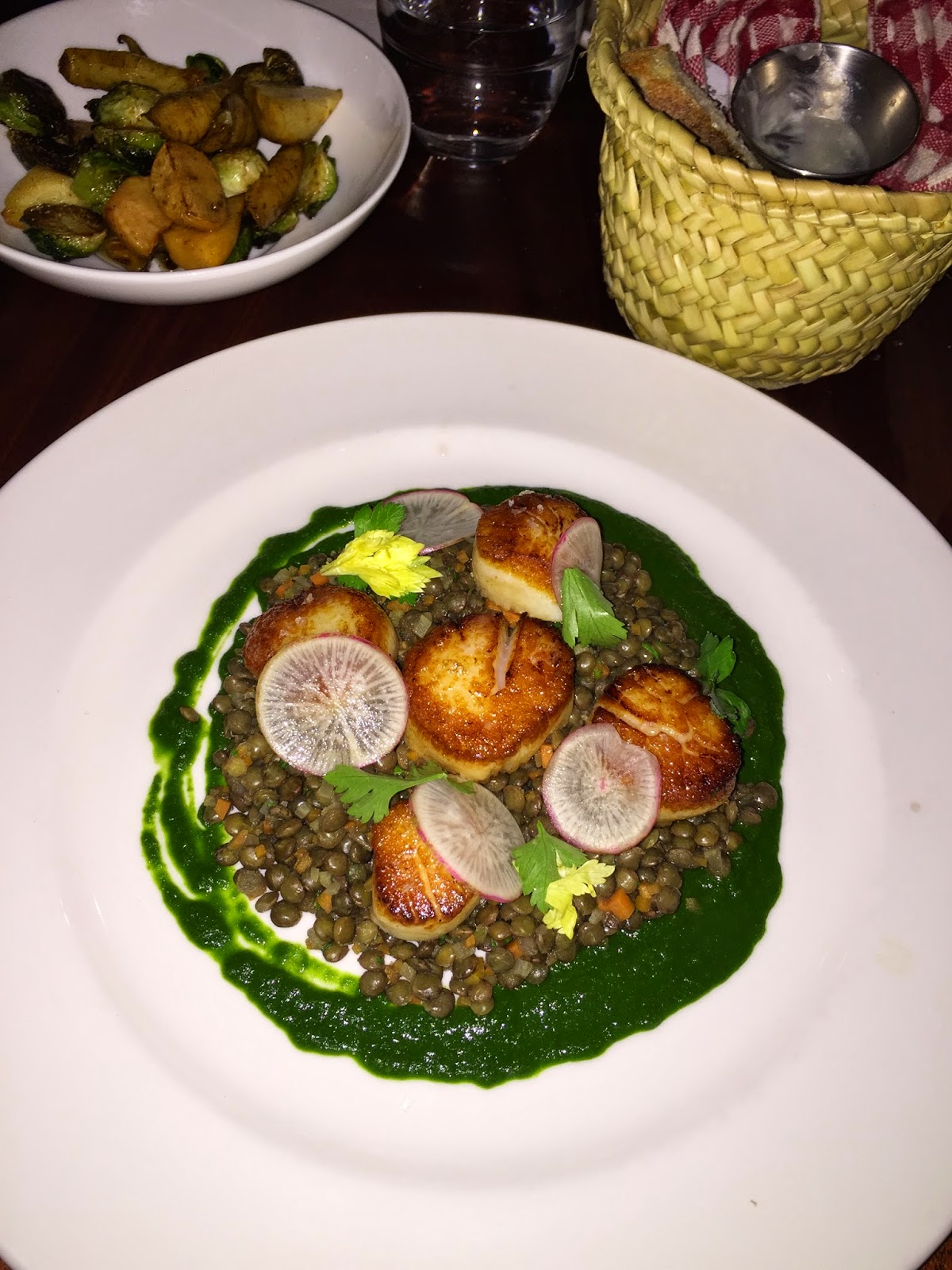 Faison roti et son pithivier-  This was the overwhelming favourite on the online review and the two in our party that ordered it (including Hubby) agreed.  The pheasant was tender and succulent and the "pastry???" on the side stuffed with chestnut was a special French treat. 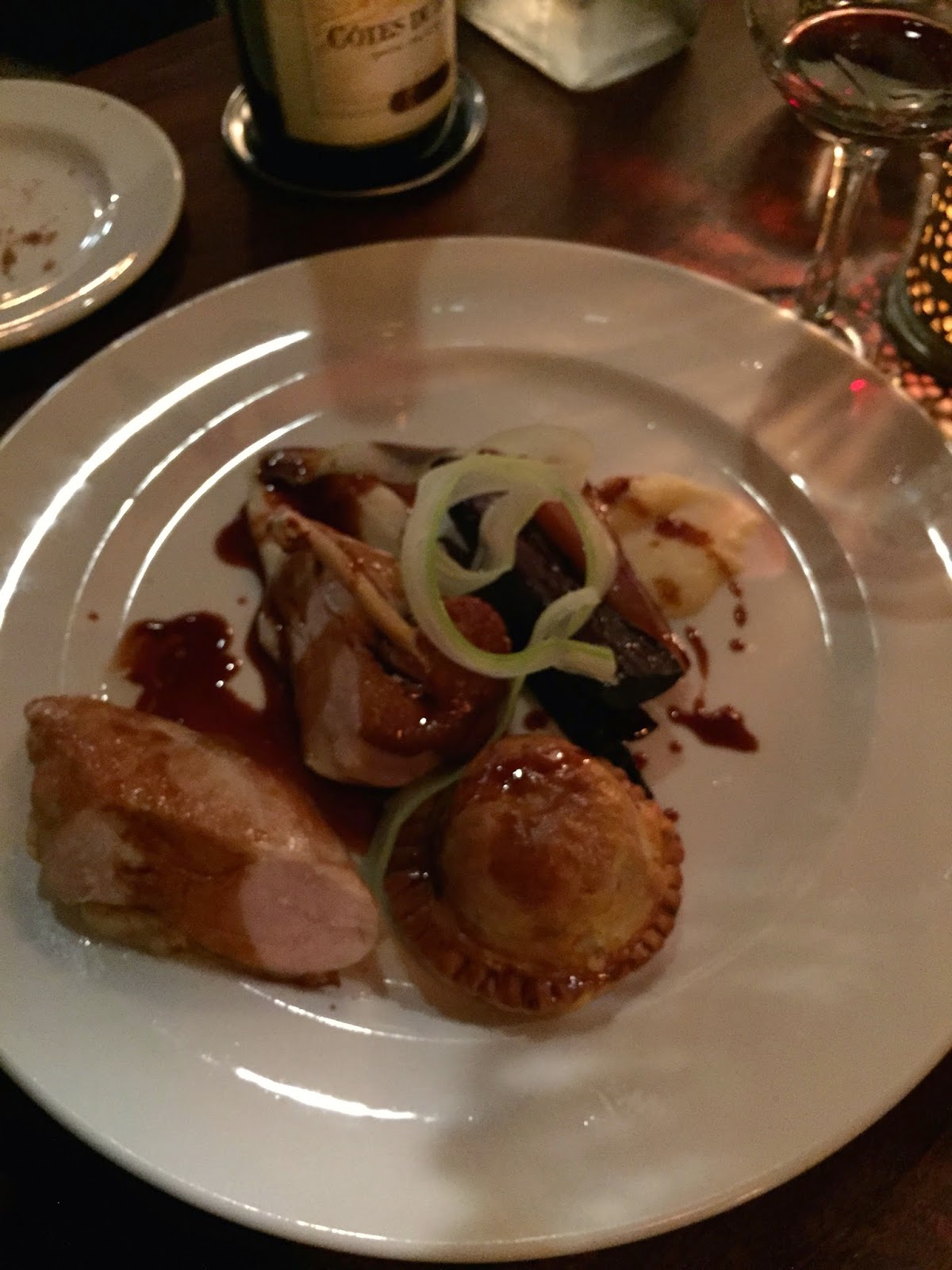 Saumon au l'unilateral- The nicely cooked fish with crispy skin was served with tagliatelle and a tarragon beurre blanc. 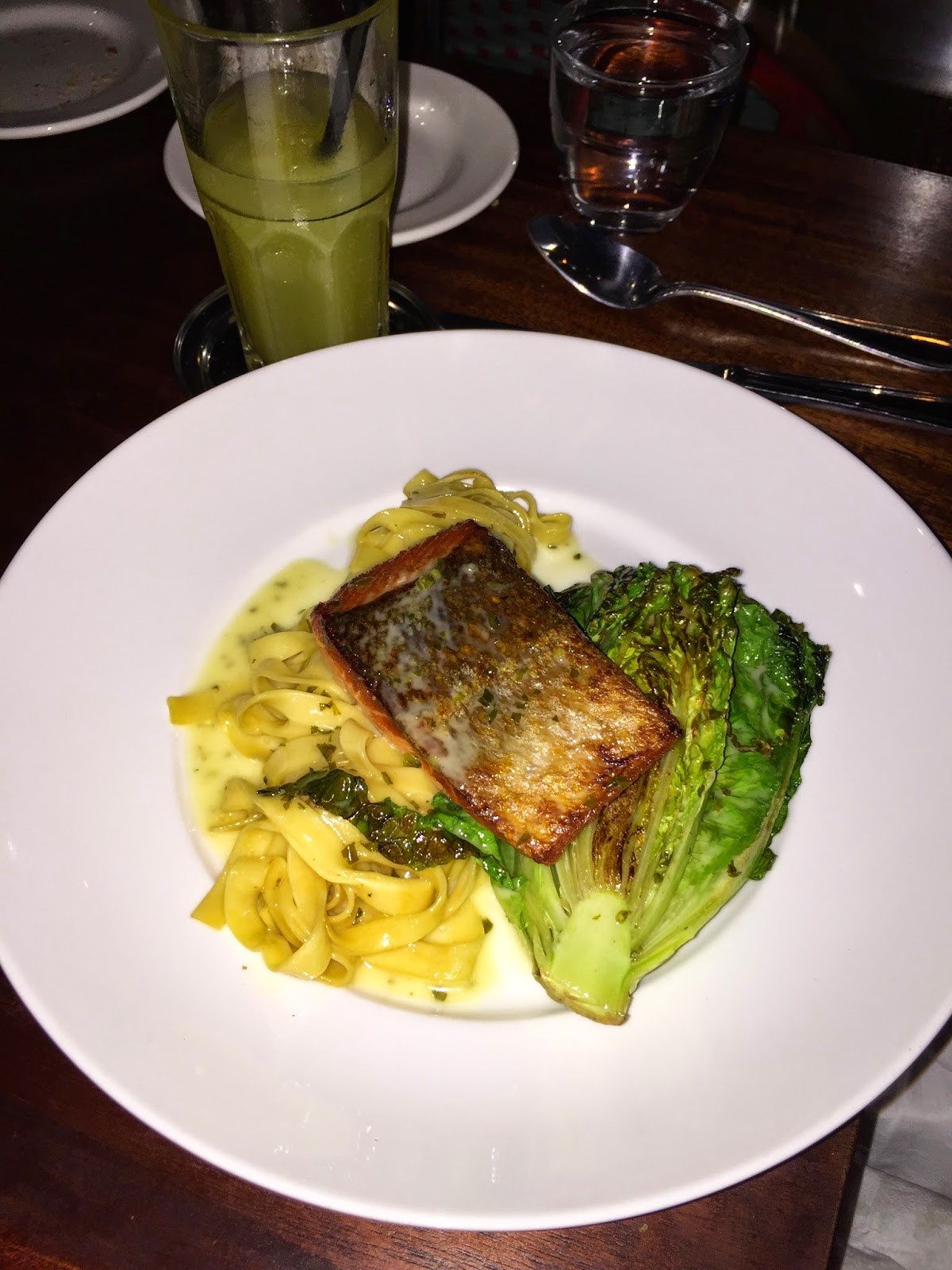 Magret de canard- This very generous portion of duck was complimented with french endive and a spicy pickled raisin puree. 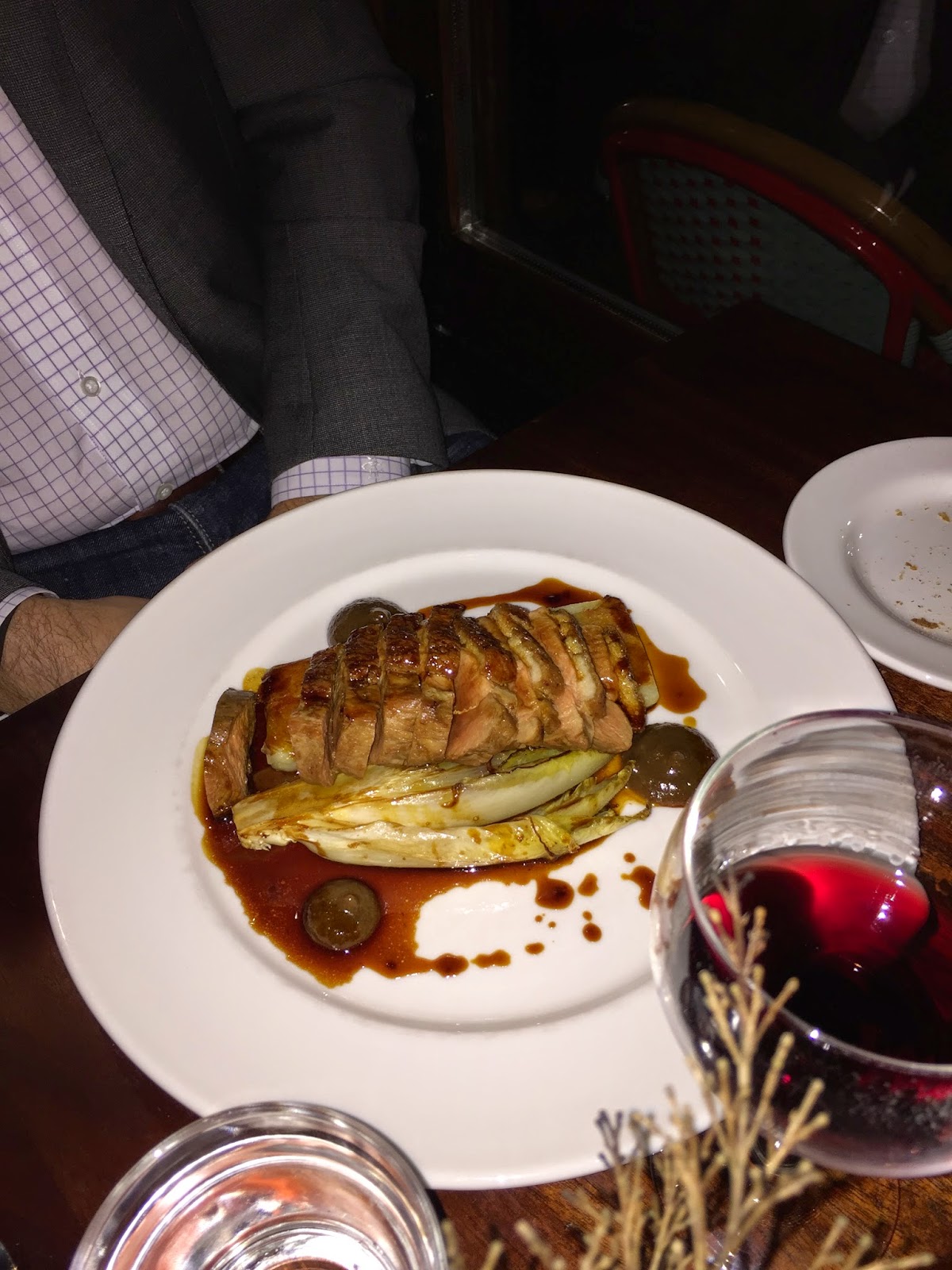 Entrecote frites- A"must" for every french restaurant, this one with grilled ribeye and a sauce bearnaise. Legumes du marche- This was way better than your average side of vegetables with a few green beans and carrots.  This combo of turnip, parsnip and brussels sprout (very seasonal combo!) was surprisingly a highlight of my meal.  I will remember those brussels sprouts for quite some time to come!

Au Comptoir is a fantastic addition to the Kits food scene.  They serve french food the way it is meant to be- simple food, without bells and whistles, but with flawless execution.  It is also offers an excellent atmosphere with polished service that makes you feel like you were transported to a Parisian neighbourhood.  It is amazing how well this place is doing in such a short time which certainly bodes well for its future.  I, for one, will be back to see how they continue to grow over time, and cannot wait to see what is in store!

Posted by Little Miss Locavore at 00:11 No comments: