Locavore Approved: Maybe?  (said to specialize in local fare and menu does feature seasonal produce, but menu does not seem to change often based on previous revues, do feature Stumptown espresso made nearby in Seattle in the morning hours).

Lummi Island, a small island off the coast of Washington, was our choice of getaway for this long Easter weekend.  Although it is a beautiful island and that in itself made it worth the trip,  I must admit that the reason for our visit was entirely food-related.   More specifically, this choice of destination was made to experience Blaine Wetzel's local, foraged wonders at the Willows Inn (James Beard Finalist for New Rising Chef!).  See the whole scoop on this meal coming soon:)

Choice of venue for the first night of our trip (we chose to eat at Willows Inn on our second night) ended up being pretty straightforward, since there is is only one other restaurant on the island- The Beach Store Cafe.  This casual little restaurant, located right near the ferry drop-off point, was taken over by the Willows Inn in 2011.  They gave it a little "facelift" to accommodate guests like us who were looking for decent food on nights when they were not dining at Willows Inn.  They installed a pizza oven, scaled down the deep-fried factor, and added a seasonal flair to bring it more in line with the philosophy at the Willow's Inn.

You will drive by Beach Store Cafe right after you get off the ferry over to Lummi Island from Washington (only a 7 minute ride!).  It has a pleasant yellow exterior with a large porch that is a nice place to sit and have a drink in nice weather.  The interior is fairly plain, but the large open kitchen complete with its pizza oven makes the space seem big and inviting. 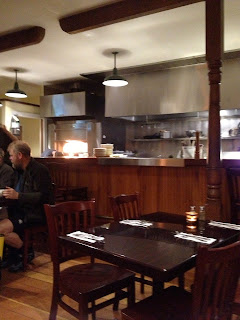 When we arrived at around 8:30, the restaurant was about half full and we were told to seat ourselves wherever we wanted.  Our server was pleasant, gave us some menu suggestions and apologized that they had run out of some items.  I was impressed that, when my brussel sprout dish came out with bacon after I had specifically asked for no bacon (I am pescatarian), she recognized the mistake before I could even mention it, and then proceeded to bring me a side salad to eat while I waited for them to redo the brussel sprouts.  Much appreciated.

Here is an overview of our first dinner on Lummi:

Mushroom and leek soup- This was the soup of the day (available as a cup or a bowl).  It was in miso broth (not cream based) and, while it was a little over-salted, I enjoyed the flavor of the mustard seeds that they had added in.  A little piece of buttered bread was on the side for dipping. 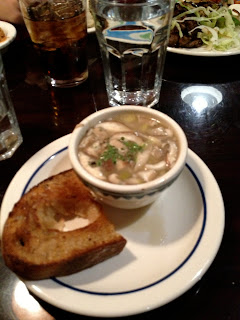 Roasted brussel sprouts- I was pretty excited to see these on the menu as I LOVE brussel sprouts, especially roasted in a salad.  While I was a bit disappointed at the size of the dish ($9 for about 8 brussel sprouts seems a bit outrageous), I loved the lemon-butter dressing and the fact that the little cabbages were charred beautifully. 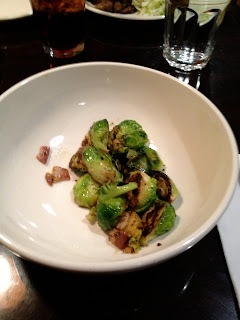 Steak Fajitas- This was the special of the evening and, strangely enough, my hubby had been longing for a good plate of fajitas for weeks so he jumped on this opportunity right away.  And he was not disappointed- nicely spiced, tender steak slices, served with all the fixings including grilled peppers and onions, lettuce, a very nice corn-cilantro relish and the most amazing refried beans (not sure what was in these things but they were mighty tasty!).  The only criticism would be the absence of cheese and the fact that he only received two small tortillas to wrap all of these fine fixings on (fortunately, he was given a third when he asked).  All in all though, these really hit the spot for him and he was still raving about them the next morning. 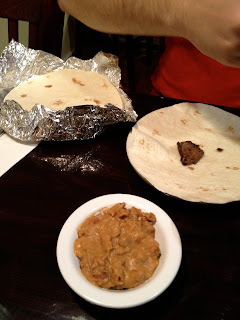 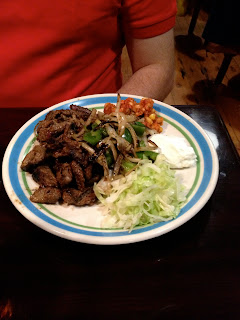 We left the Beach Store Cafe feeling satisfied and relaxed.  We really enjoyed the laid-back vibe and the friendly service.  The food could perhaps do with a little polishing up but I hear that they have a brand new chef so hopefully he will be up for the challenge.  With a little fine-tuning, the Beach Store Cafe will be a great place to dine for locals and visitors alike.

Posted by Little Miss Locavore at 22:36