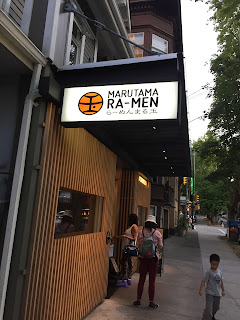 These were the exact that Hubby spoke after his last bite of ramen at Marutama Ramen.  He had hardly uttered a word to me as he slurped away noodle after noodle, with a thoughtful look on his face.  But now it was clear- there would be many more visits to this place in our future.

Myself and Hubby, the lover of all that is Asian, had tried a couple different ramen places when we arrived in Vancouver a few years back but after some experiences with super fatty pork (really not Hubby's thing) and lack of good veggie options for me, we never pursued ramen again until a few weeks ago.  The incentive to give it another go came from watching an episode of Mind of a Chef, where David Chang happily sat slurping away bowl after bowl of ramen on a visit to Japan.  Hubby decided it was high time to give it another kick at the can so we asked around to a few of our ramen-loving friends and consulted the internet to see which places were best.

It actually took us a few tries to end up at Marutama.  The overwhelming recommendation had been to check out Hida Takayama (a Robson Market food stall) but they were only open until 8pm on the night that we were planning to go.  We had also heard good things about Hokkaido Ramen at the Denman end of Robson and actually had a seat there when I realized that they only had pork broth and no veggie options for me.

By this point, we were getting REALLY hungry and needed to get some ramen in our bellies pronto.  We therefore ventured across the street from Hokkaido to Marutama on Bidwell St.   We had not heard a lot of buzz about it but had always seen long line-ups when we were near there doing evening runs to Whole Foods.

Fortunately for us, by the time we arrived around 9:30pm, there was no line and therefore no need to write our name on the board outside to hold our place in line.  We were immediately seated in a little nook right in front of the window that was somewhat cut off from the hustle and bustle of the rest of the room (great for a good chat).  Even at that time of night, the place was pretty much full of excited ramen eaters.

The servers were very friendly, and did a great job explaining the different types of ramen to us ramen rookies.  Hubby was especially grateful at their suggestion when he asked them to bring out the staff favorite, the Aka Ramen with 7 kinds of mixed nuts.  They nailed it!  Hubby is still talking about how much he adored that bowl of noodles, with its spicy chicken broth (all of the broths here are chicken-based, not pork-based) that made you nostalgic about your childhood chicken soup experiences except with A LOT more kick!  The broth is made using chicken feet and abdominal area to produce wish flavours and is "cloudy" due to its high collagen content.  The thinly sliced pieces of pork on top were nice and lean, yet still moist and their signature wavy noodles (Chijure) are the perfect vehicle to absorb the broth.  I have rarely seen Hubby get so excited about a plate of food! 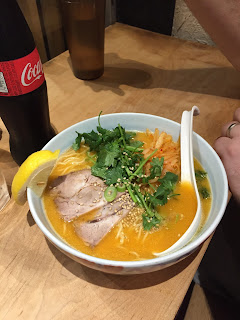 My veggie version (Tan Men) was equally delicious (a note to vegetarians out there- the broth is still chicken based).   There was a generous amount of veg on top (cabbage, greens, snow peas), including a generous amount of the "sea lettuce" (Aosa seaweed) which is unique to the ramen at Marutama.  The seaweed dissolves in the broth, giving a nice mild salty flavour that intensifies as you make your way to the bottom of the bowl.  I loved it so much I ordered an extra side of it!  I also ordered a "flavoured egg" on top which added a slightly sweet element and had a delicious runny yolk.  What a killer combo of flavours! 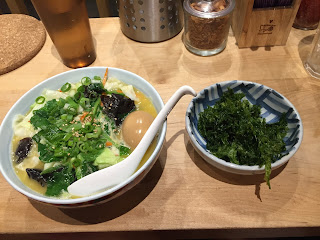 It saddens me to think that we have waited so long to jump on the ramen bandwagon, but better late than never!  Thank you Marutama Ramen for helping us see the light.  I know see A LOT of ramen eating in our futures!

Posted by Little Miss Locavore at 22:53