A Night in DC, complete with Mike Isabella's Graffiato

Locavore Approved? YES- The two concepts behind Graffiato are  “Italian” and “Local”.  If you couldn’t guess that these guys are serious about using only the best local ingredients by looking at their very season-appropriate produce, the huge “local partners” sign directly above their kitchen upstairs gives it away. 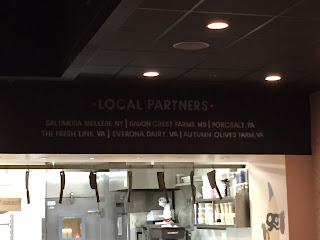 I decided at the last minute to attend a conference in National Harbour, Maryland, about 20-30 minutes outside of Washington, DC.  It was to be quite a whirlwind trip, with just 2 full days away and many conference activities to attend, so I really doubted that I would make it into the US capital.

But who was I kidding?  How could I be so close to such an iconic city and a renowned food scene and not check it out?   And so began my strategic google mapping to plan a route through as many of DC’s landmarks as I could in one evening, with Graffiato as my final destination.

Fortunately, my spontaneity did not backfire and the whole evening worked out perfectly.  Instead of cabbing, I decided to take advantage of the fabulous Potomac Riverboat Company's "Washington By Monument" sightseeing tour from National Harbour to Georgetown, which takes passengers along the Potomac River past important DC landmarks such as the Washington Monument, the Lincoln Memorial and the Kennedy Center for Performing Arts, just to name a few.  With not enough time to explore all of this territory on foot, this was the ideal way to get into the city.

Getting off the boat in the hip Georgetown neighbourhood was a great starting point for my little jaunt through the city, especially because I got to check out Baked and Wired, a neat coffee shop and bakery that is known far and wide for its 20 odd flavours of cupcakes (check out their website here).  Just steps from both the water and the infamous "M St.", a shopper’s haven, stopping at Baked and Wired to pick up some treats to bring home was a no-brainer.   As expected, the little shop was packed to the rafters, with a line-up right out the door.  I was handed a menu to quickly glance over and, believe me, it was a real challenge to pick out my cupcake choices in a hurry, especially when my eyes were also being drawn to all of the other non-cupcake baked goods on the counter.  I settled on 2 cupcakes, the Vanilla Satin (vanilla cake with chocolate frosting) and the Texas Sheetcake (chocolate cake with cinnamon and chocolate pecan frosting), and on the Dazed and Confused square, which  (are you ready for this?) is a slather of peanut butter and peanut butter chips over a brownie over chocolate chip cookie.  There was no way that was not coming out of the store with me! 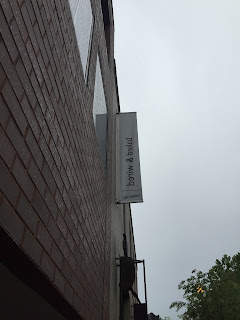 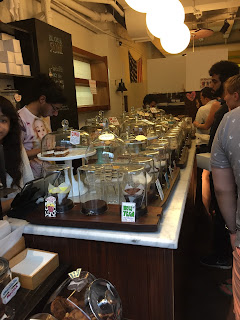 After my adventure at Baked and Wired, I headed down M St. toward downtown, for a 30 minute stroll past many DC landmarks, including the one that I felt I could not miss, the White House, where I stood among gaggles of others for a White House selfie before carrying on towards Chinatown where I was to find Graffiato just passed the entrance.

Being the huge Top Chef fan that I am, Mike Isabella (one of my favourite-ever contestants) immediately came to mind when I thought about where to check out in Washinton.  Isabella has created quite a mecca in DC, now with 4 restaurants to his name, including Graffiato which opened in 2011, a year before he claimed the title of Food and Wine's "The People's Best New Chef Mid-Atlantic". 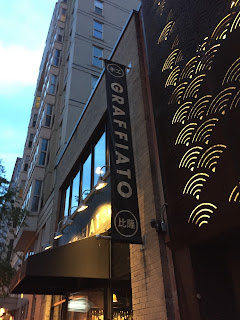 I am not really sure what I was thinking, but for some reason, I had not thought it to be a problem to just stroll up to Graffiato and be granted entry and a table.  When I rolled up at 8:15, the first clue that this would not be the case was when I reached the doorway and saw the front bar absolutely packed with people, practically on top of one another.  When I asked the front-of-house how long the waitlist was, she looked at me rather skeptically and said “you know the kitchen closes at 11pm?”.  Before I could ask what she meant by that, she abuptly said, “I can put you down for our last reservation at 10:30pm.  While I was getting pretty hungry and worried what my 2 dinner companions would say when they arrived, I took the reservation over 2 hours later without hesitation.  I had come this far and was going to find out what Mike Isabella had up his sleeve no matter what!

Fortunately, my dinner companions were also willing to stay the course without too much begging on my part and since we could not even get close to the Graffiato bar,  we walked a few doors down to the Flight Wine Bar which the front-of-house had suggested when I asked where we could kill a few hours.  I feel the need to say a few words about this place, which ended up being one of the best wine bars I have been to for a number of reasons.  First of all, the space itself is super cool, with both ample seating at the bar, and a number of well-spaced booths and hightop tables scattered around the room.   Secondly, and most impressively, our server was amazingly knowledgeable about wine (he knew every wine on that menu inside out) and, although he spoke with great conviction, there was not a hint of pretention from him or anyone else we met there.  He described to us the very interesting menu set-up, in which trios of wine were arranged in flights, all with cool names and all for 18 dollars.  You could either choose one of the recommended options, or create your own by mix-and-matching.  I chose the “Hipster and Proud Of It”, while my colleagues chose the “Not Your Grandma’s Chardonnay” and the “Sailing On the Meditarranean”.  I found mine to be especially cool, starting off with a sparkling, moving to a very nice white and ending with an organic red that was very unique, in a good way!  When our trios were delivered, we were given a little paper with the names of each wine to bring for the road.  With our wine, we also chose a cheese plate to tie us over until our 10:30 dinner, which ended up quite exceptional, with carefully-selected cheeses (both local and imported), a tomato jelly, a lavender-infused jam, and house-made pumpkin seed brittle.  Before we knew it, it was 10pm, at which time all wines were half price!  We resisted the temptation, knowing that our dinner at Graffiato was almost upon us, but we were mighty happy to have stumbled upon such an unexpectedly great spot! 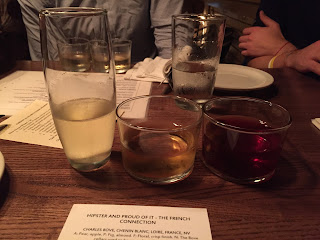 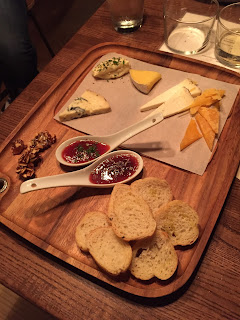 After saying out goodbyes to the fine folks at Flight Wine Bar, we returned to Graffiato which, much to our surprise, had unexpectedly cleared out at some point while we had gone and now had lots of empty seats and a vacant bar.  We were ushered upstairs, which, just like downstairs also had an open kitchen, but had more tables and no bar, so was a much quieter.  The décor is very rustic, with white brick walls, wood tables and beamed ceilings.  I quite liked the wall at the top of the stairwell, with playful cartoon vegetables painted on it:) 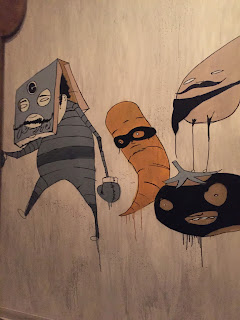 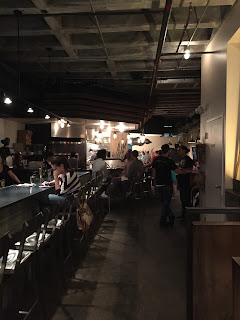 Since we were down to crunch time with the kitchen closing in under 30 minutes, we quickly perused the menu, which is divided into a number of categories including vegetables, salad, pasta, wood-oven pizzas and, on the back, “Graffiato Classics” and "Chef's Favourites". Our server informed us that dishes were meant to share (3/person, or 2/person with pizzas), and would come out of the kitchen as they were ready.  Between the 3 of us, we decided on 6 dishes that, unlike some small plates restaurants, left our bellies full and even left us with extra pizza to bring home for breakfast.  Throughout the meal, service was much like I had experienced at the front of the house- uber-efficient (there was never a moment with an unfilled water glass!) and abrupt, not unfriendly per se, but not really friendly either.  I guess that is just the way they roll to keep the place moving at such a hectic pace.

Nevertheless, our dishes came out of the kitchen in record time, first the vegetables/salad dishes and then the pizzas, and we eagerly dug in.  Here is a sneak peak at our meal:

Caesar- This was my colleagues choice who, in his words, is “very picky” about his Caesar salads and is an expert in good vs. bad preparation (he hates bottled sauce!).  Lucky for him, there was nothing but homemade goodness in this salad, with a few surprises including a uniquely sweet dressing and cheese-filled warm croutons (yummmm). 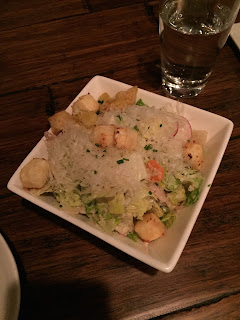 Brocollini- I am a sucker for anything green, especially when he comes all jazzed up like this version with a delicious red pepper relish (my favourite part of the dish), feta and walnuts. 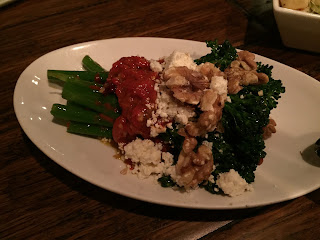 Charred Octopus- My vote for best dish of the night, this dish made my new-found love for octopus grow even stronger.  I have no idea how they prepared this octopus to be so incredibly tender, and the smoky charred exterior was just marvelous.  Add one of my other favourite ingredients, beets, in the form of a caponata, and I am in heaven. 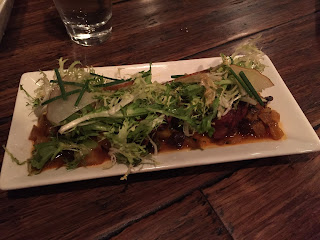 Shrimp Tortellini- The old bay scampi on top of this dish were amazingly fresh and the tortellini was also stuffed full of shrimp (one of each for all of us!). But it was really the to-die-for sauce that made this dish for me.  I could taste lemon and thyme, but have no idea what other secrets were behind it.  We made sure every last drop was out of that bowl! 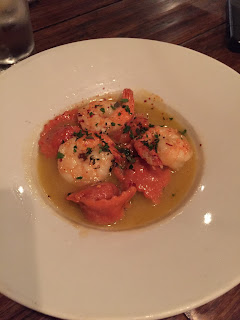 Casper the Friendly Ghost- I actually thought this dish was a salad when I ordered it so was pretty surprised when I  saw the cauliflower and the endive come out as a pizza!  Fortunately, I was not disappointed, and understand why it is under the “chef’s favourite’s” section.  The flavours of this white pizza were quite simple, so you could really taste the garlic and the nice char on the cauliflower.  Refreshingly unique! 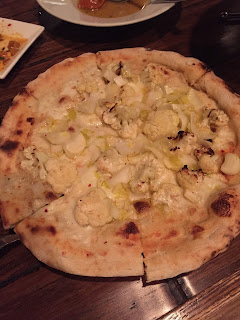 Jersey Shore- There are many pizza choices here, all of which I'm sure are great, but this one is just so creative and so yummy that, in my opinion, you would be remiss if you left Graffiato without ordering it.  Everything from the tomato sauce base, to the deep fried calamari to the cherry pepper aioli was so incredibly great, and all the elements together were nothing short of perfection.  You gotta try it for yourself. 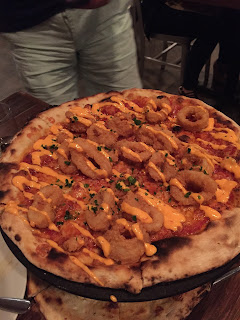 Overall Verdict?
Although this was a super quick trip, I am pleased at what I was able to accomplish in the short time that I had.   It had all of the elements that I look for when seeing a new city- a bit of walking, a bit of sightseeing, and, of course, some good eats!  Baked and Wired, Flight Wine Bar and Graffiato when all well worth the visit and come highly recommended!  I cannot wait to go back to see what else this great city has to offer!

Posted by Little Miss Locavore at 17:47