Locavore approved?  YES-  Chef Ciaran Chung's sharing plates menu is chock full of delicious local goodies and is expected to change often.  All of the produce that we enjoyed was a reflection of the current season, and there are seafood and meat options that are locally sourced (mussels from Salt Spring, BC salmon).  Furthermore, they insist on making everything in house, from the bread to the house-made cheese. 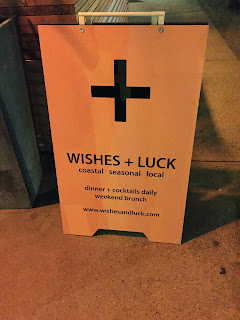 I once again have Scout Magazine's "Anticipated Openings" for putting yet another gem of a restaurant on my foodie radar.  Wishes and Luck is the creation of Ciaran Chung who learned from the best at Vancouver greats like Abattoir and Boneta.  His partner is Dolly Reno who previously owned the well-respected Lear Faye Espresso Bar, the space that now houses Wishes and Luck. 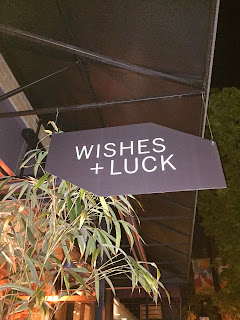 The Drive has been on fire lately, first with the opening of the awesome new Thai joint Kin Khao (see my review here) and now Wishes and Luck which, having just opened less than 2 months ago, is already firing on all cylinders.

Like most places in this neck of the woods, Wishes and Luck has a very laid-back vibe, with a good dose of hipster.  The words written on the wall on the way in, "I got lucky in East Van", are playful and set the tone for the unpretentious, relaxed ambience.  As you enter the main space, you will pass a very nice bar leading into the main seating area which has booth seating along the far wall.  The space feels deceptively larger than it is, especially when the outside seating area is opened up as it was on the night of our visit. 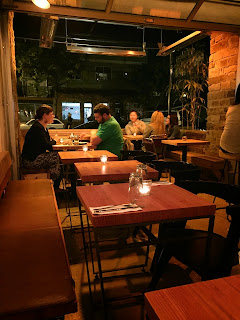 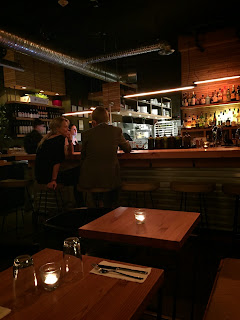 Myself and my friend showed up on the later side at around 10pm and the restaurant, at which time they were about half full.  Wishes and Luck has been quite a hot spot since opening, with lineups to get in on most nights (no pesos accepted) so perhaps our late entrance worked in our favour.  We were greeted by a lovely women working front-of-the house, who immediately got us seated at a booth-style table and within seconds, our server appeared to say hello.  Service throughout the evening was friendly and low-key, but attentive, and our server obviously knew the menu quite well as she answered our questions about cocktails and specific dishes.  There were numerous servers who came by during the meal to bring our dishes and check in to make sure everything was to our liking.

The menu at Wishes and Luck is divided into a number of sections including "starter plates", "farmland + sea" (the larger plates), "hearty vegetables", "cured meats", "cheese" and "sweet somethings".  I had expected a typical sharing plates concept, and ended up being quite surprised at how substantial the dishes were (especially those in the "farmland and sea" section).  My friend and I ordered 3 "farmland and sea" plates and a vegetable dish and were were stuffed to the point that my friend brought almost a whole dish home with her!  Although I encourage sharing, you could could easily order just one dish here for yourself and be completely satisfied.  A last note to vegetarians- the menu was just fine for a pescatarian like me but the selection of vegetarian dishes is limited.  Do not let this dissuade you from going however- it does state at the bottom of the menu that there are vegetarian and even vegan options to order.

In addition, Wishes and Luck has quite a sizeable cocktail list, with many very original creations.  It was very difficult to choose just one!  In the end, I decided on the Vancouver, with house-made spirits and a hint of fig.  I personally found it to be a bit strong for my taste in terms of alcohol flavour.  My friend on the other hand wanted a sweeter drink with a juice base that she really enjoyed (sorry,forget the name!). 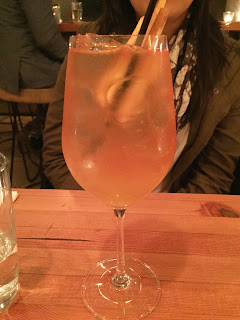 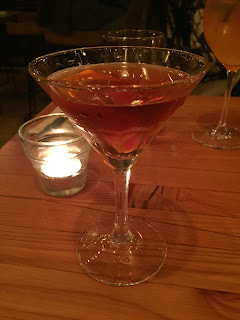 Here is a look at the dishes that my friend and I decided on to share:

Salt Spring Mussels (crunchy potatoes, garlic aioli, roasted pepper)- We were a bit taken aback when this dish emerged from the kitchen as it was not exactly what we were expecting.  Interestingly, the mussels were all out of their shells and were sitting on a bed of potatoes.  Usually, potatoes do not excite me but I must tell you that these were the crispiest, tastiest potatoes I have EVER had (would die to know the secret!).  If the potatoes weren't already enough to blow us away, there was also the epic garlic aioli that I could have eaten in spoonfuls.  As you can tell from the picture, I got carried away right off the bat so half the dish was consumed pre-picture:) 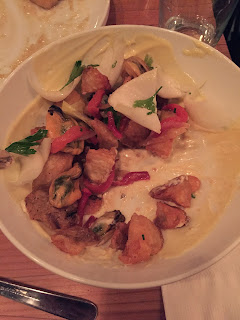 Wild BC Salmon (lightly cured, potato gnocchi, rapini, roasted garlic) - This was a very generously-portioned dish, and this is only a small scoop that I had taken from the larger dish after we had eagerly dug in).    I loved the smokey flavour on the perfectly-cooked salmon which made the dish just that bit more unique and it balanced very nicely with the slightly bitter rapini.  Th gnocchi were very soft and pillowy and, once again, they scored major points for a scrumptious sauce. 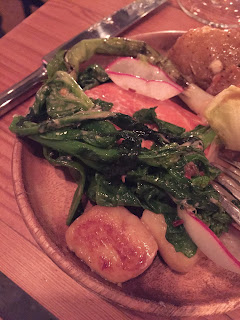 Roasted Pork Belly (jerk spiced, spring peas and turnips)- Once again, we were really shocked at how large this dish was (not your typical sharing plate!), especially my friend as I am pescatarian so the two large pieces of pork belly were all hers (she eventually surrendered and brought a lot of the port home).  From my end, I adored the lovely assortment of beans that accompanied the pork
(favas, black beans, peas).  So light and fresh! 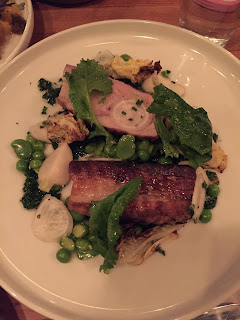 Salad of Squash (fresh cheese, citrus, toasted pumpkin seed vinaigrette) - Although we were already pretty full by the time this last dish came out, I was still eager to dig into this one as I had read some pretty glowing online reviews.  And let me tell you, this dish deserves all of the positive accolades a million times over.  They transformed the humble into a magical dish, with 3 different preparations of squash, each with a unique texture, and some orange slices for some unexpected bursts of sweetness.  The dish was then finished off by a light, creamy sauce.  Really too good for words. 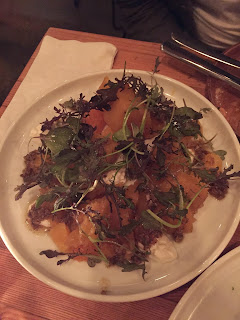 Overall Impression?
Although I knew that Wishes and Luck would be good considering Chef Chung's strong culinary background, it far and away surpassed my expectations.  At the end of a great meal, there are usually one or two dishes that stand out but here, every single dish was memorable such that I wanted to go back the next night and have the exact same dishes again.

I cannot think of a better addition to the Drive's ever-expanding foodie scene!

Posted by Little Miss Locavore at 00:40