Locavore Approved?  Not really- Although there were a few local "accents" (a few peaches and nectarines strewn on some of the plates), local was not all that well represented.  In reading previous online reviews/blogposts, it appears as though the menu is pretty “stagnant” and does not reflect the changes of the seasonal produce. 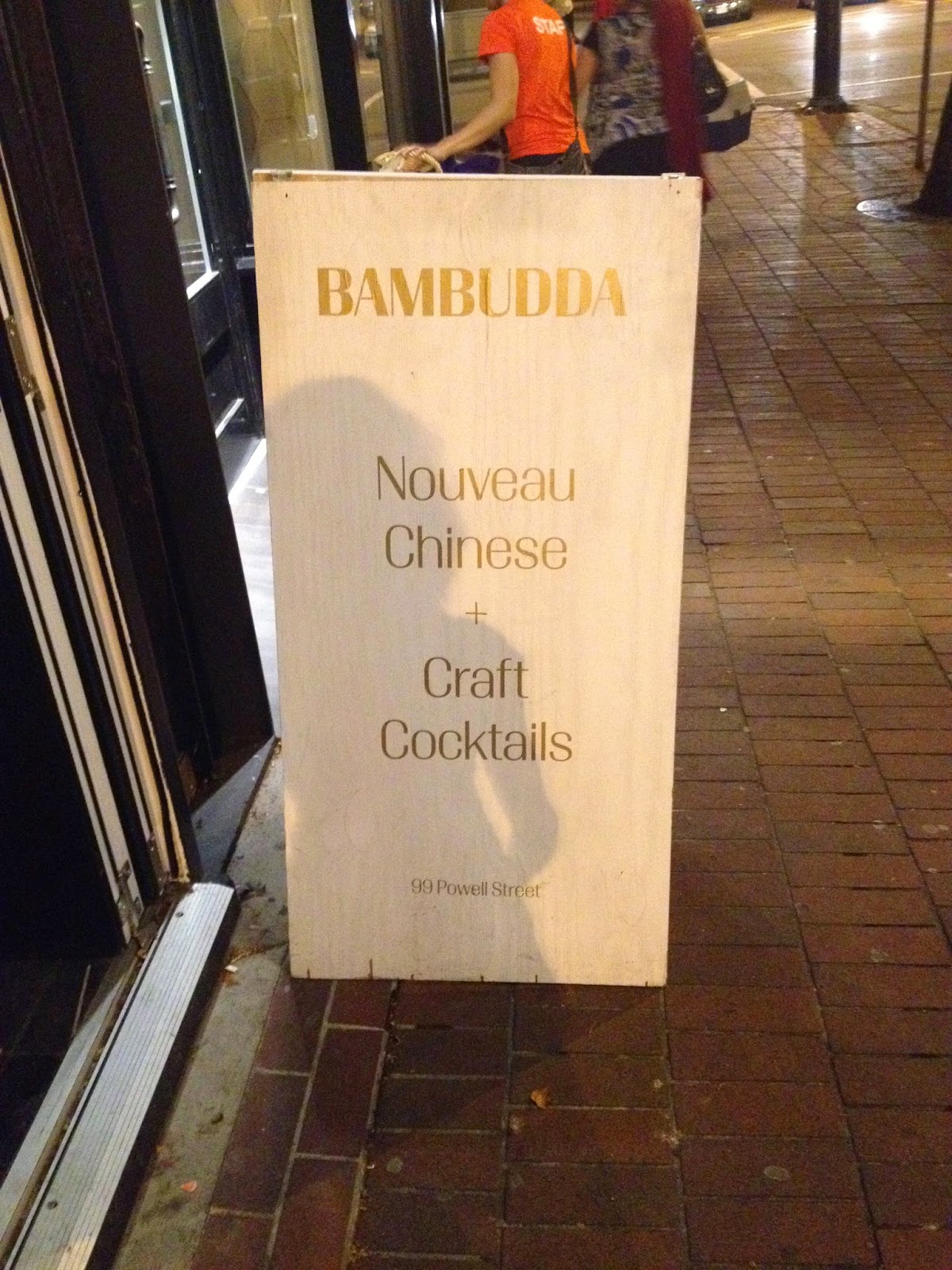 Hubby loves Asian food and has been itching to try Bambudda for a while now.  In looking at the menu, it reminded him very much of Bao Bai, one of his favorite restaurants in the city (see my Bao Bai blog post here).  A year after its opening, we finally ventured down to its Gastown location to give it a whirl. 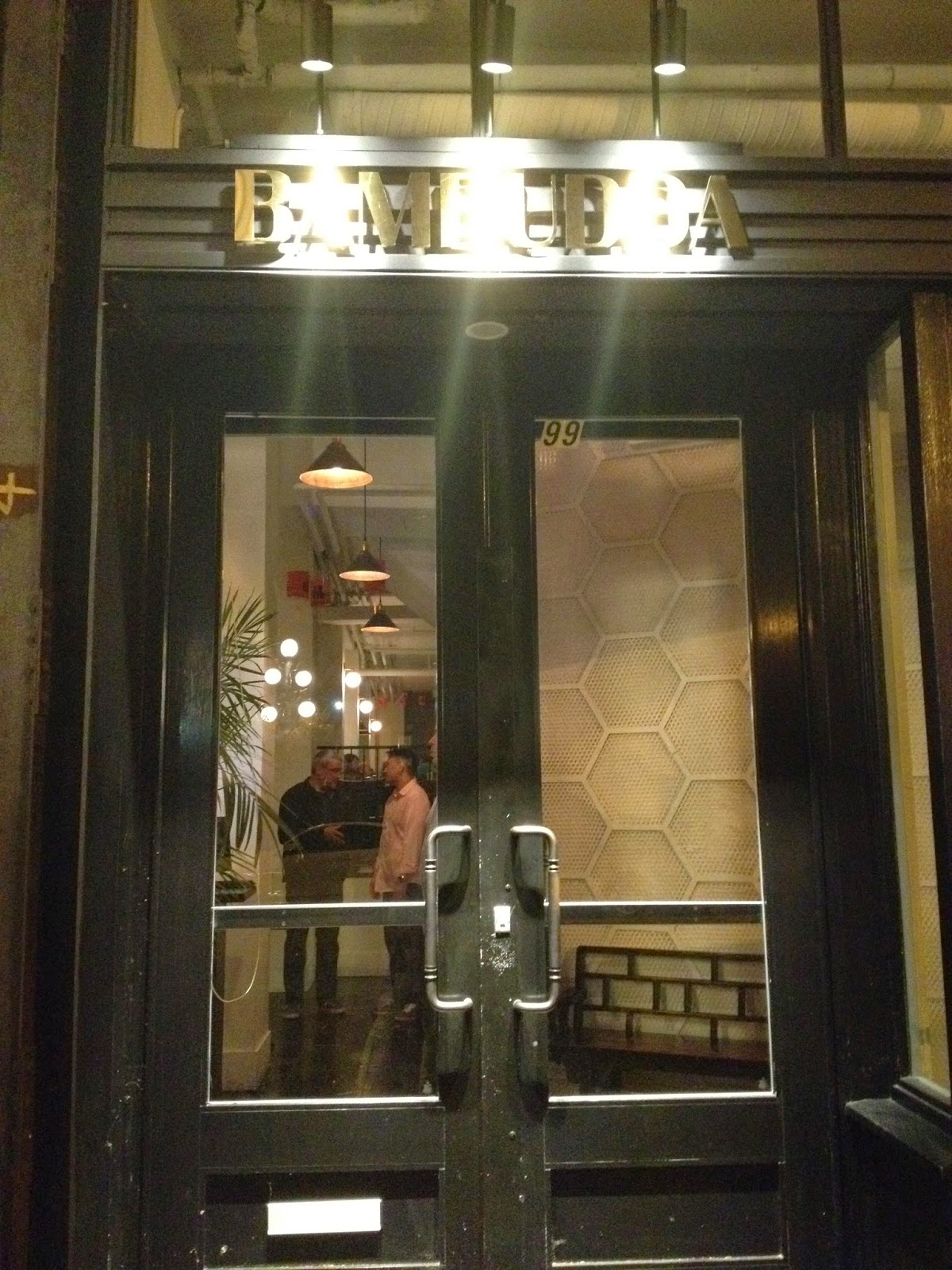 Our first impression was a positive one.  there is no denying that the bar at the front of the restaurant is pretty awesome.  On one side, it is open to the street (if weather permits) with lots of standing room around the outside.  The opposite side of the bar within the restaurant has some seating around it and is adorned by faux Chinese lanterns overhead.  The bar is really the focal point of the restaurant and, as we were to find out later, the best thing about the whole experience by far. 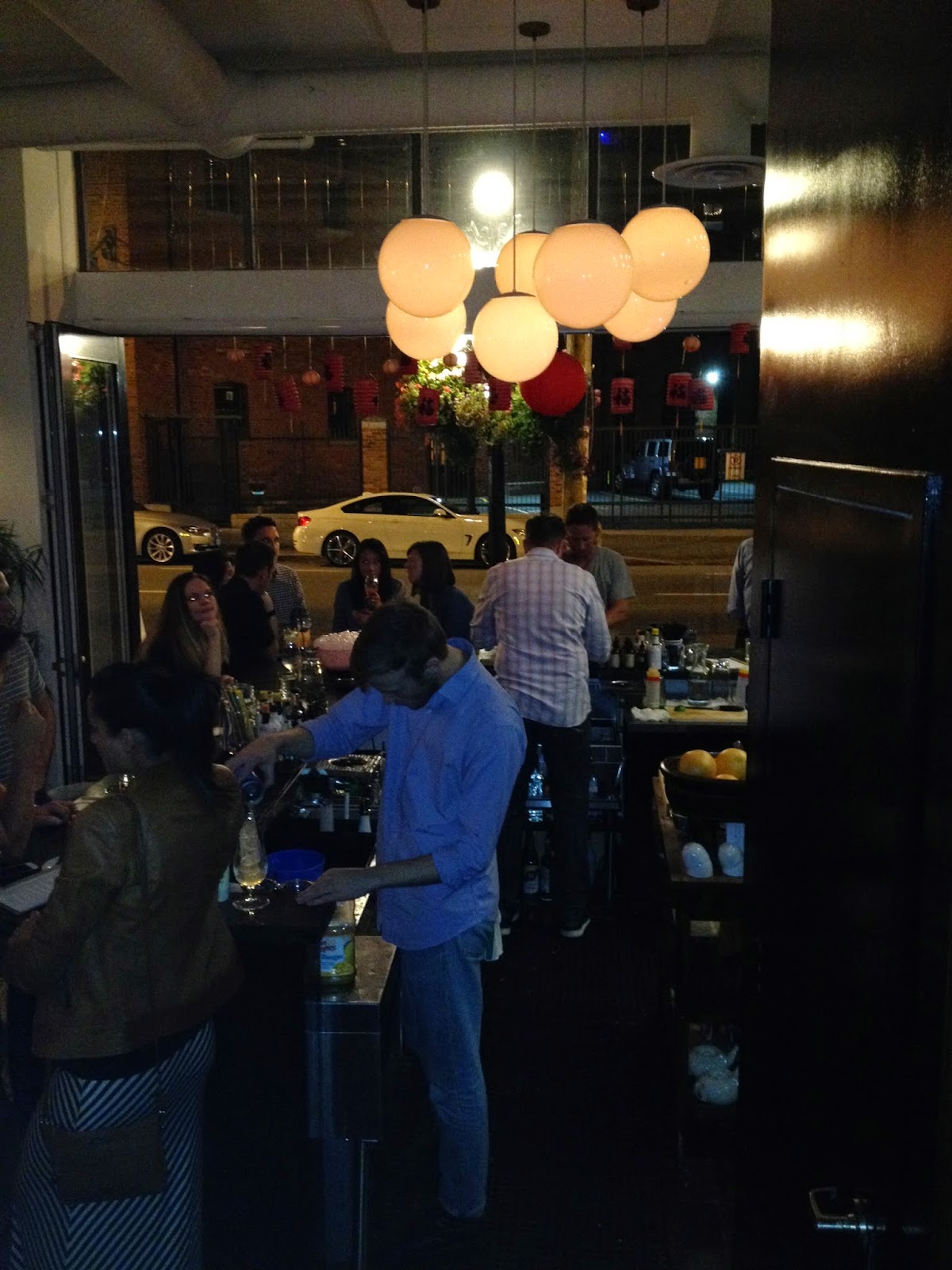 The back of the room housed the main seating area.  We were fortunate to snag a table for 2 overlooking the bar and we were well entertained by the very energetic bartenders busy shaking, stirring and pouring cocktails.

The service started off well as we were quickly escorted to our reserved table, given menus and then had our drink orders taken a few moments later.  Unfortunately, the speedy service did not last.  It took a good 15 minutes to get our drinks and take our dinner orders. After that, it was at least 15-20 minutes between dishes, which is unusual for a small plates-style restaurant.  Interestingly, our one "side dish" came right at the end of the meal, about 10 minutes after our last dish.  I should mention we arrived at 9:15pm and the dining area was only about half full, so I can only imagine how backed up things must be earlier in the evening.  That being said, our server was very friendly and approachable and we had several people regularly filling up our water.

In keeping with the fabulous bar, the cocktail menu is unique and fun.  The drinks all have Asian-inspired names and, in watching those being served to other tables, some very creative presentations.  I ordered the Chinatown Sour, which had gin, house-made citrus and clove liqueur, lemon, Campari vinegar and egg white.  I thoroughly enjoyed the evolution of flavours- first sweet, then sour, then bitter.  This was one of the best cocktails I have had in a while, and definitely want to come back to the bar to sample some others. 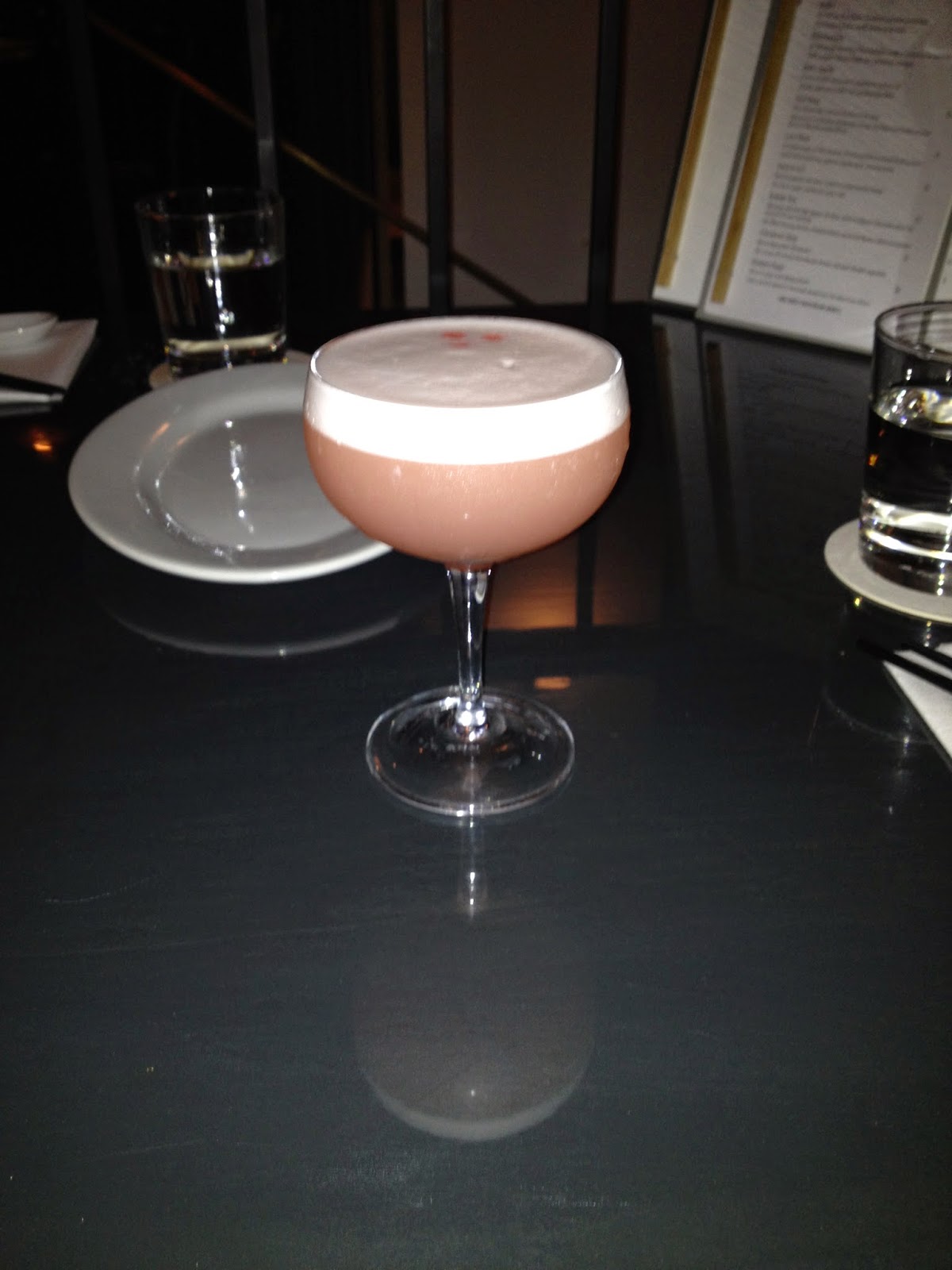 Here is the rundown of our meal:

Wood Ear- This mushroom "snack was OK but nothing too exciting.  Hubby found texture off-putting (personal taste) so I ate the whole dish myself which, after a while, did get rather sickening. 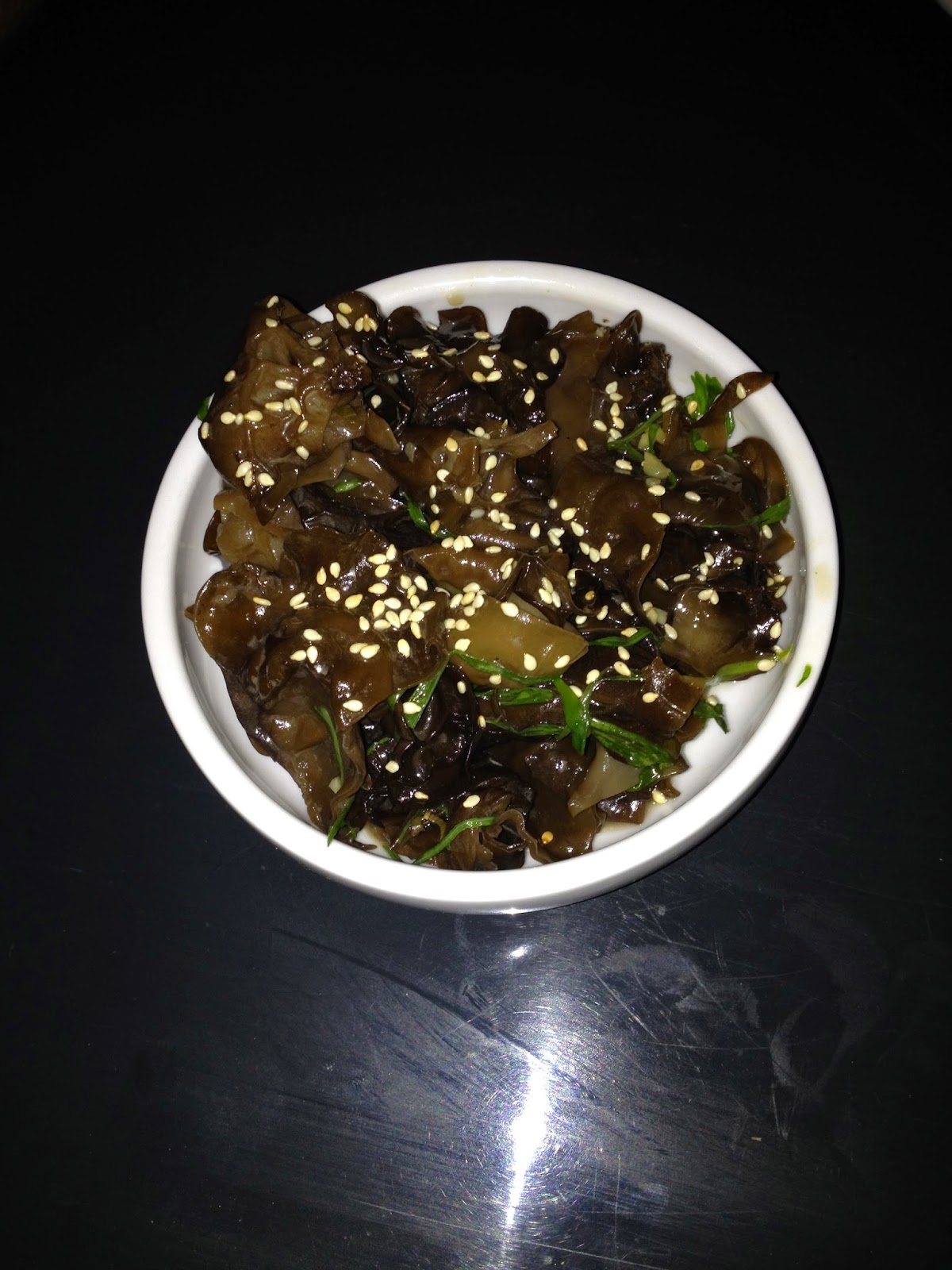 Skins- This was Hubby's pick.  How could one go wrong with chicken skin after all?  Just like my mushrooms, Hubby managed to finish off the dish, but for something that should have been so sinfully delicious, they were just "OK".  Unlike any of the other dishes, they were under seasoned and could have done with a little something other than the lemon on the side to jazz them up. 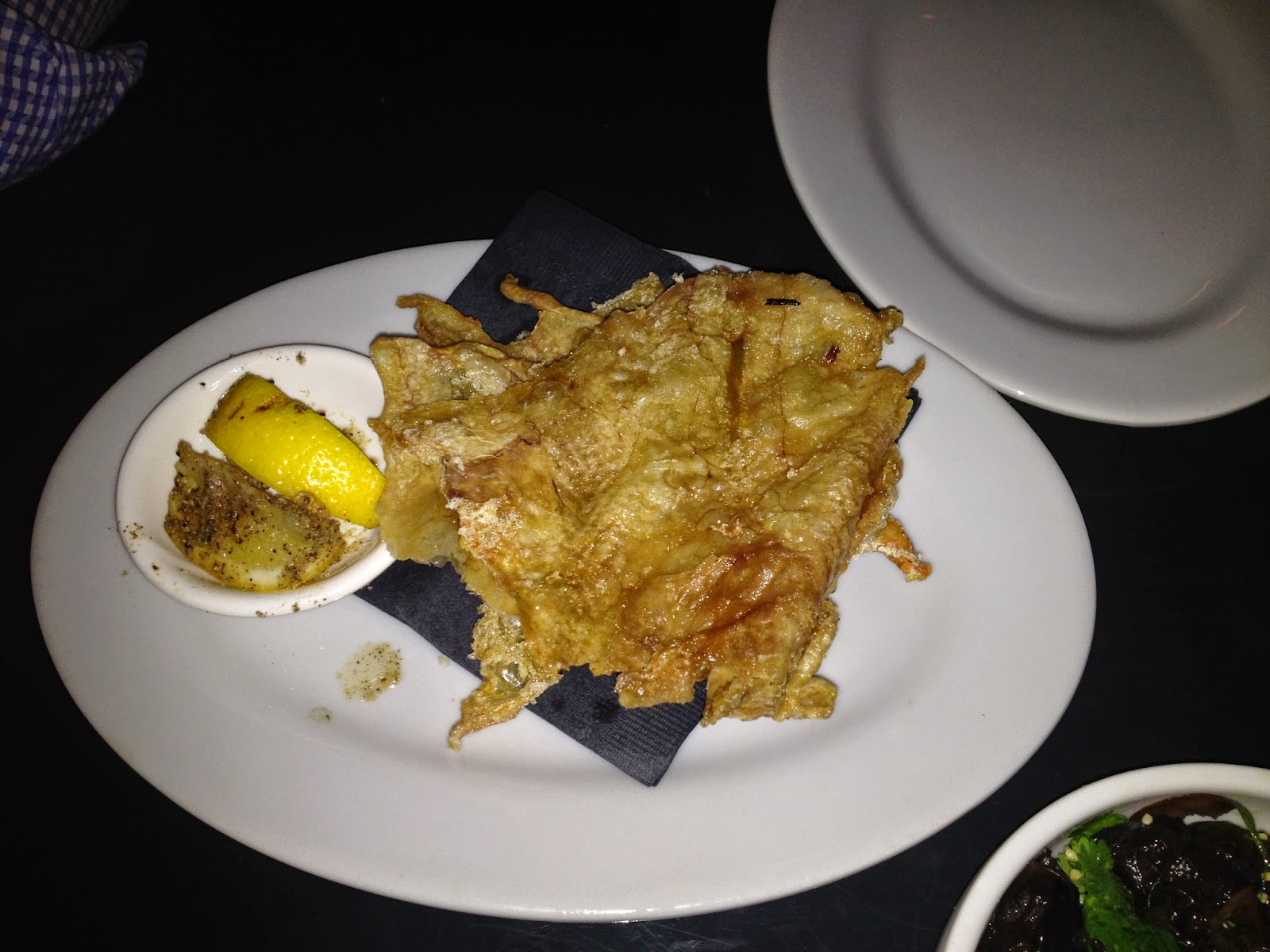 Nectarine Salad- While this salad was undoubtably fresh and I really appreciated the use of seasonal ingredients (the peaches were outstandingly juicy!), the dressing pretty much ruined it for me.  It was SO incredibly salty from the very heavy-handed use of fish sauce.  The only redeeming quality was the little grains of popped corn on the top which added some nice texture.  There are few salads that I cannot eat and I had to choke down the last bite of this one. 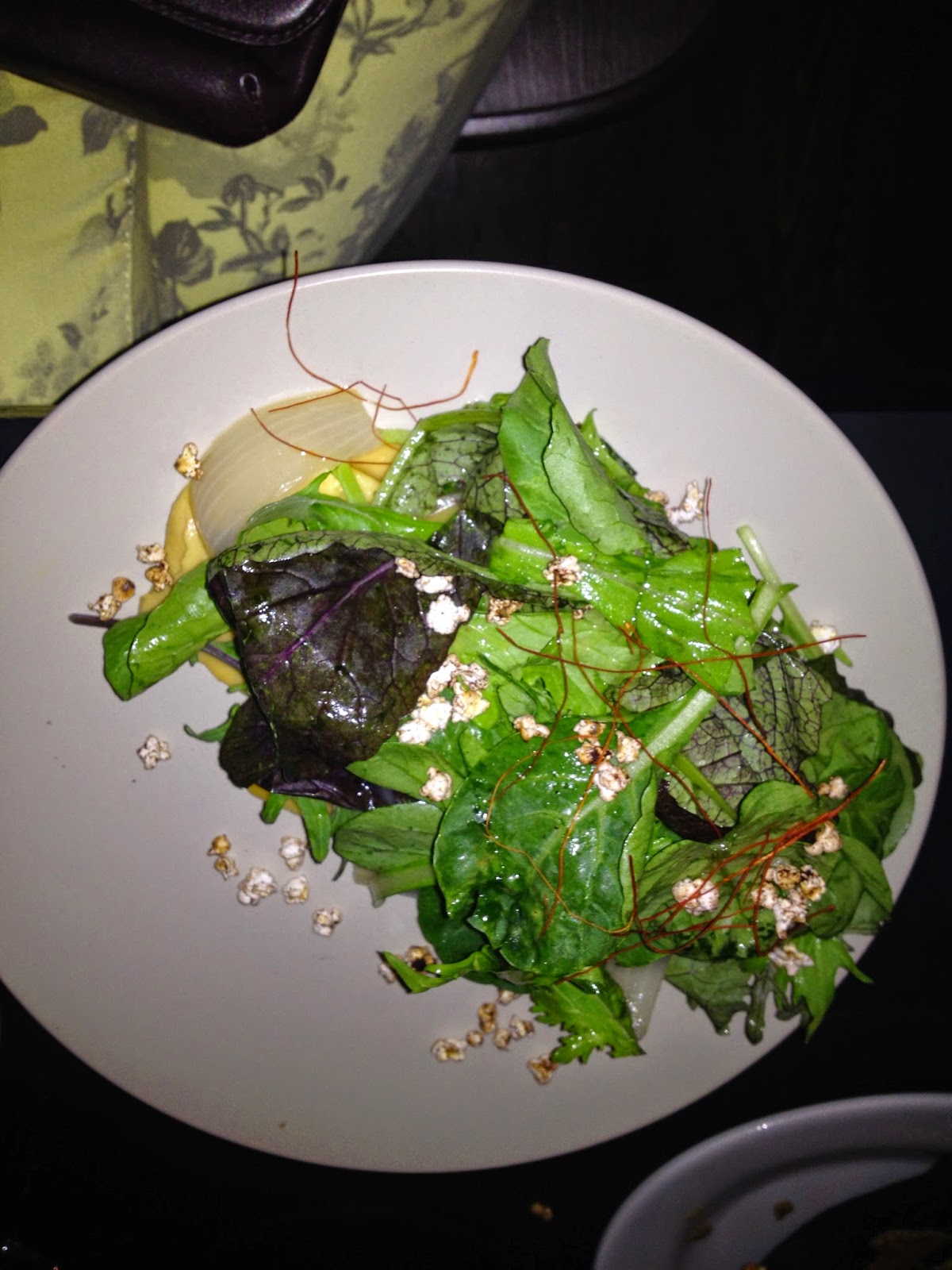 Dungeness Crab Rice- If I had to choose a favourite dish, this would be it, although it was still  mediocre at best.  It reminded me of a risotto dish that was a bit overcooked.  It was pretty mushy, but I must say that I did like the textural variety that the chewy Carolina gold rice added.  Again, this dish was WAY too salty but at least it did not have the "fishy" taste that the salad did. 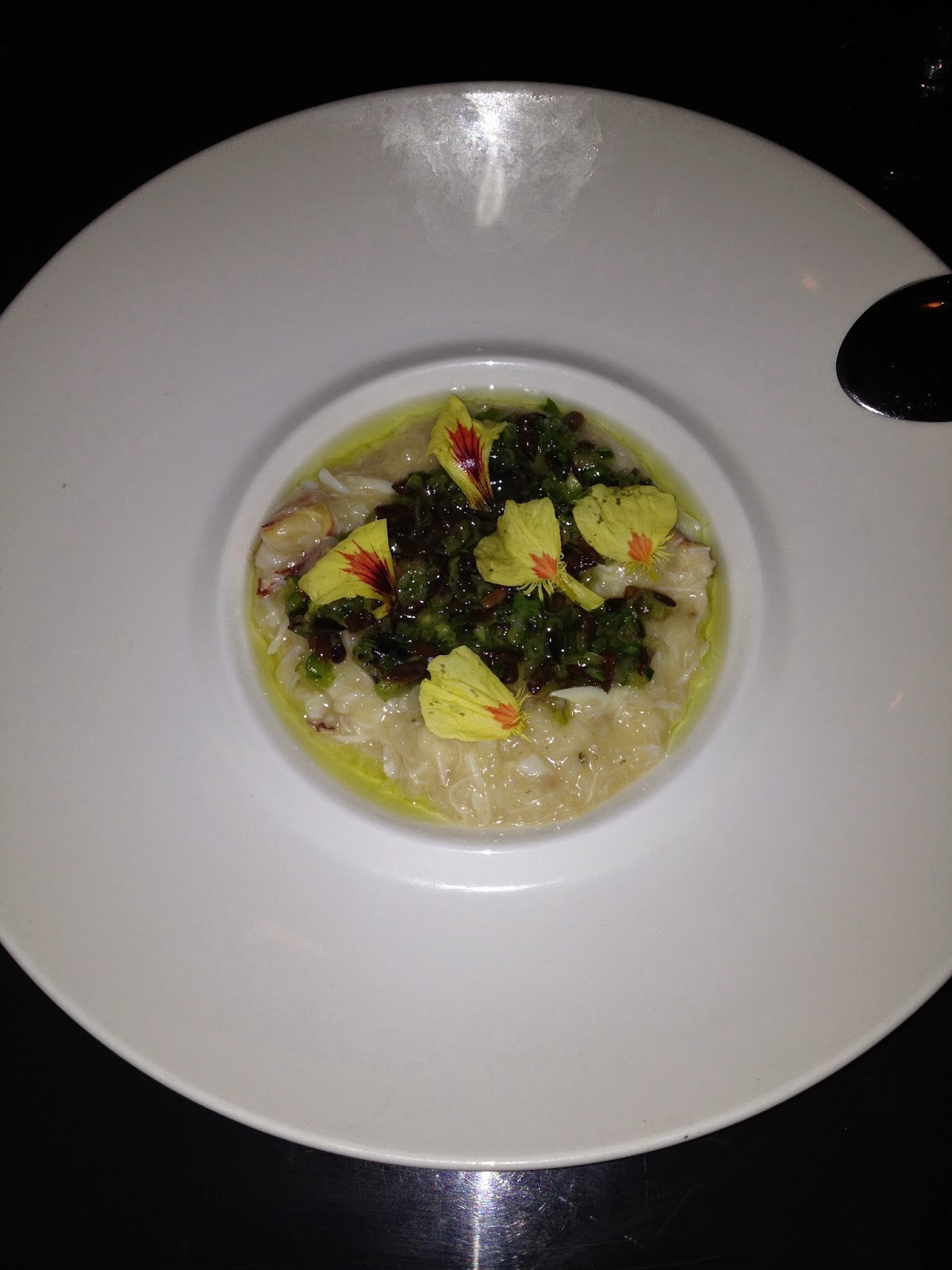 Crispy Pork Belly- This was Hubby's meat pick of the evening and it unfortunately did not redeem the meal for him.  The pork itself was pretty pedestrian and fattier than it should have been.  I ate some of the red spinach on the bottom which was decent, except for the plum-based sauce that it had soaked up from the bottom of the plate, which was overwhelming sweet and, once again, too salty. 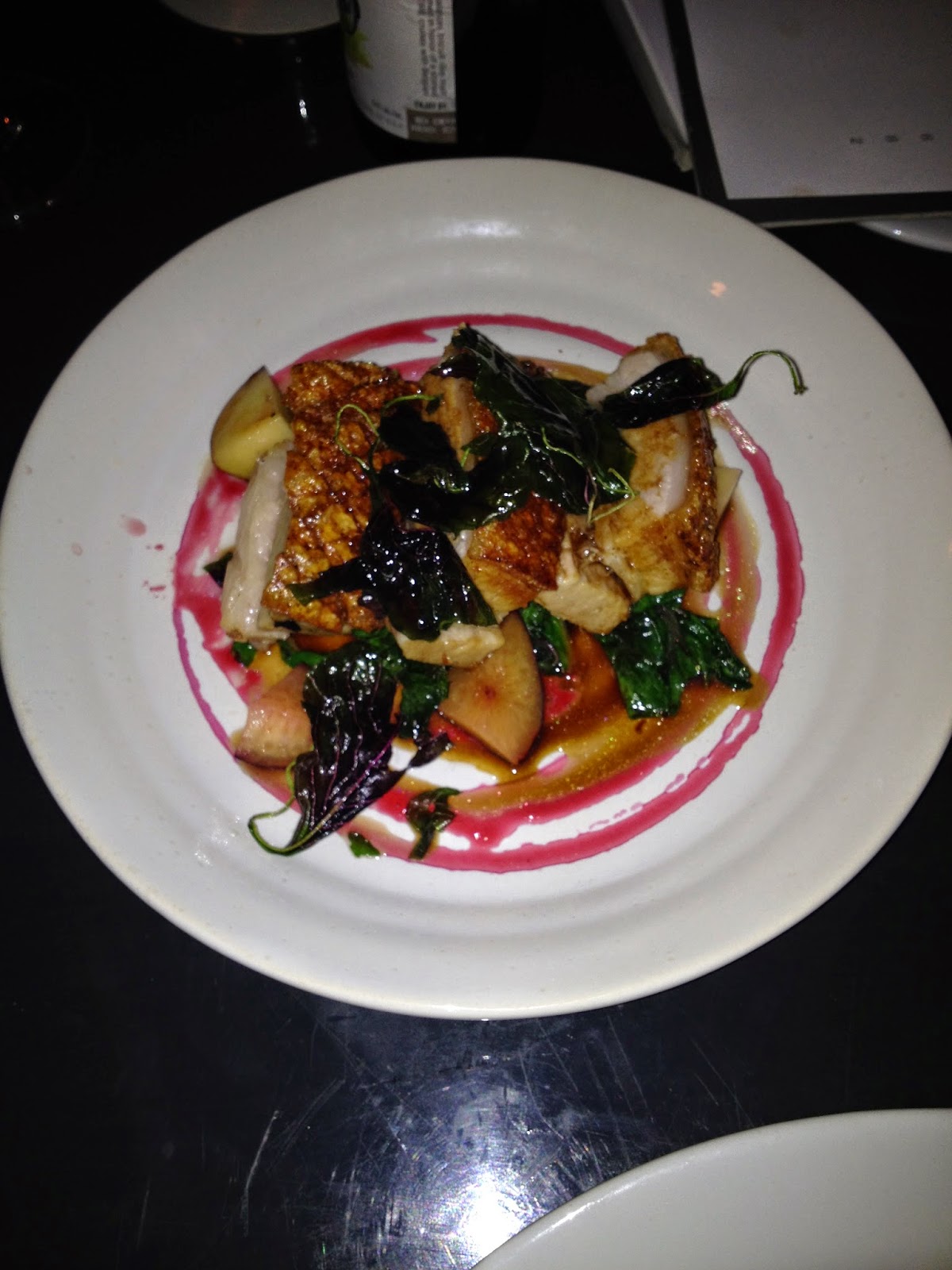 Eggplant- This was a "side" that was delivered to our table about 10 minutes after our last dish, so I ended up just eating it as its own dish.  The eggplant was prepared in two ways- coins of deep-fried eggplant on the top and stewed eggplant on the bottom prepared with tea and popped grains.  The tea flavour of the stewed eggplant was too strong for my taste, and the popped grain had become soggy and mushy.  And (surprise, surprise) the whole thing was way too salty. 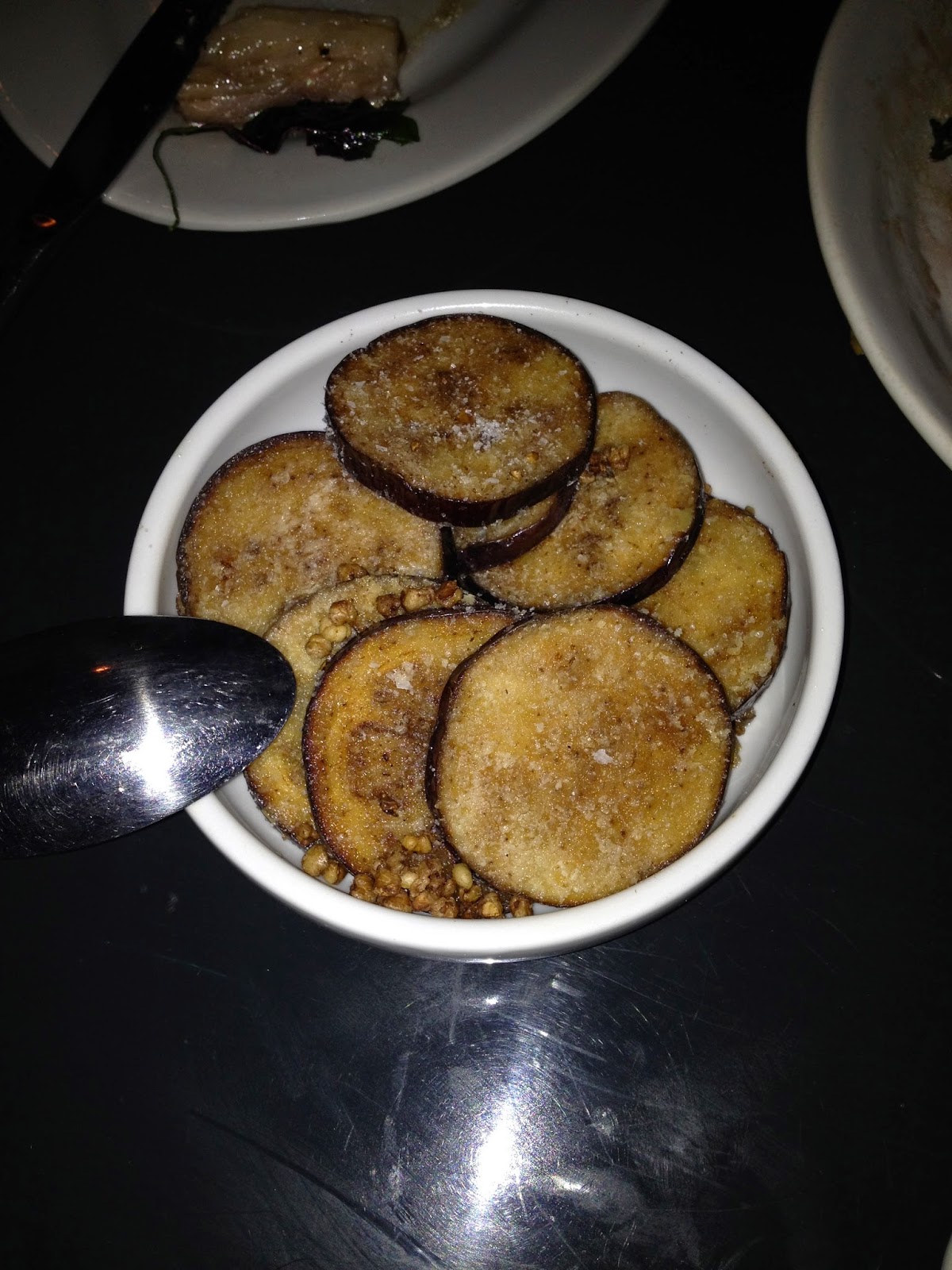 I hate to say it, but this was one of the worst meals we have had in this city in quite a while.  While it may be worth your while to check out the bar for a pre-dinner cocktail, make sure you have dinner reservations elsewhere.

Posted by Little Miss Locavore at 22:59