French Food at its Finest at Les Faux Bourgeois

Locavore Approved? KINDA - Although this French gem may not change their menu around as regularly as some others, they still honour the changes of the seasons and feature seasonal produce on their nightly "specials" board.  They also feature a nice selection of BC wines.  Based on the opening page of their website, their "Spring-Summer" menu will soon be changing to feature the tastes of fall. Wonderfully rich and comforting French dishes are apparently on their way!  We cannot wait to drop by on a rainy Vancouver night to be warmed up from the inside out:) 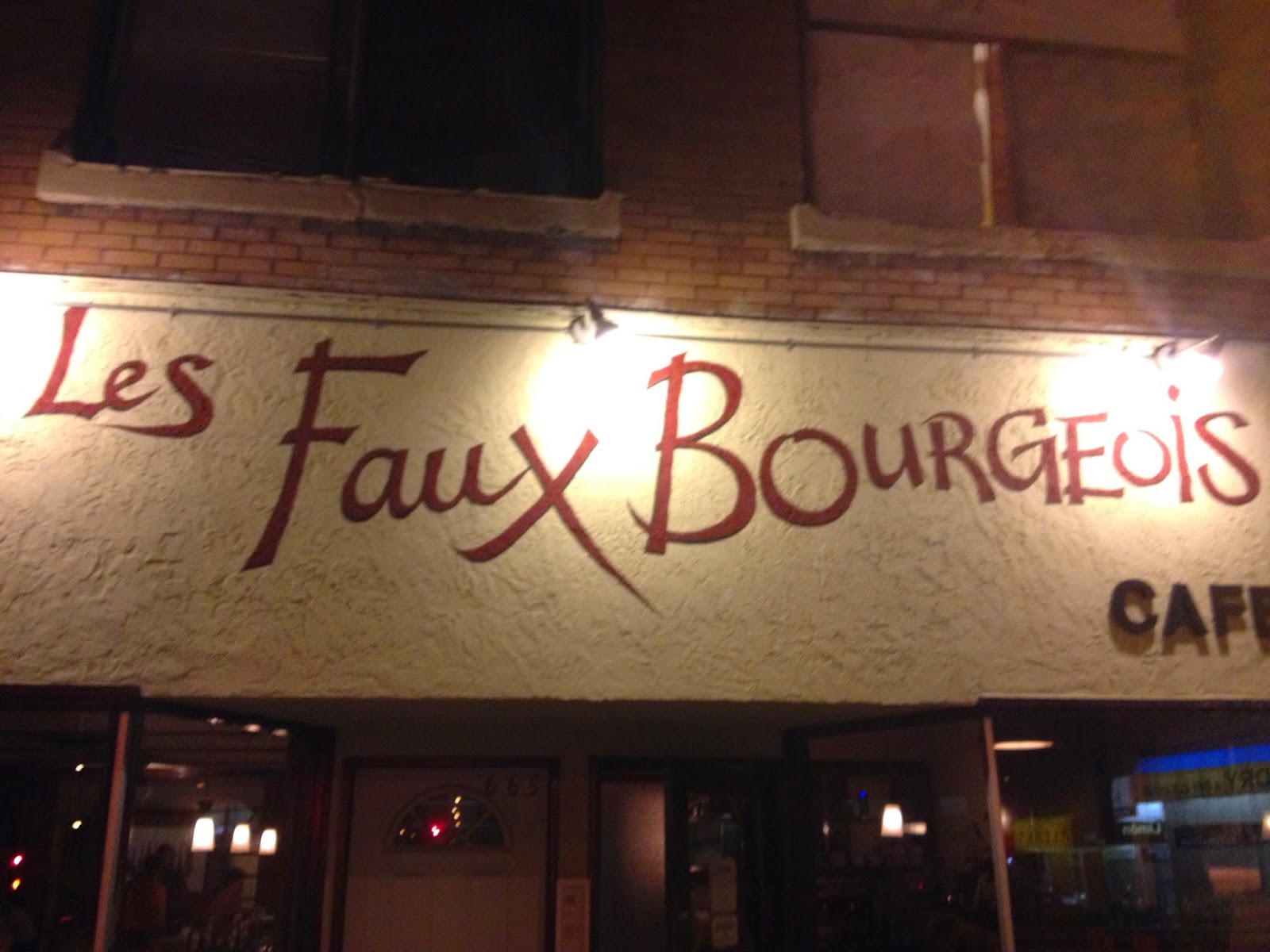 With so many promising new restaurants popping up in Vancouver these days, it is easy to loose sight of all the great Vancouver restaurants that have survived the test of time and continue to thrive in the city's competitive restaurant scene.

Les Faux Bourgeois is one of those "oldies but goodies" that remains still manages to have a packed house every night.  With its wins of "Best French" and "Best Bistro" in Georgia Straight's 2014 Golden Plate Awards and its honourable mention in the categories of "Best Casual French" and "Best East Side" in the 2014 Vancouver Magazine Awards, it is obvious that people have not forgotten about this French gem.

When we arrived at Faux Bourgeois for our 9:00 reservation on Saturday night, the place was hopping. I had expected it would be since I called the Tuesday before to book it and I fortunately snagged the very last spot for that night (reservations STRONGLY recommended, far in advance!).  How these guys manage to fill the space night after night is made more impressive by the fact that it is not close to any other eating/drinking establishments or forms of entertainment, so if you are here it means you made a special trip to join them for the evening (which, for the record, I would gladly do ANY night of the week!).

Although there was a full house, we never felt crammed at all at our table, however those at the booths on either side of us were obviously a bit more snug with their neighbours.  Having just been to Paris a few months ago, the slightly dated and sparsely decorated brought back fond memories of our meals there.

Contrary to the stereotypical rude service that some associate with Paris (which, for the record, we did not find to be the case on our recent travels there), the service at Les Faux Bourgeois was quite exceptional.  It is obvious that these servers are used to being busy.  They juggled their tables masterfully and made it look easy.  Despite running around all night, our server remained astonishingly chill and composed and somehow managed to make it back to the table with the water jug every time my glass was near empty.  Our appies arrived at our table within of ordering.  There was then a lag as we were waiting expectantly for our mains.  We were starting to get a little antsy when suddenly, to our surprise, a bowl of fries appeared in front of us despite the fact that neither of us had ordered fries.  "There must be a mistake", I said, to which the server replied "These are for you to nibble on since we know it has taken a while to get your mains out".   And just like that, any negative emotion that I may have had about waiting melted away and they instantly scored an A+ in the service department!

Les Faux Bourgeois' menu is quite simply divided into appetizers, mains, sides and desserts.  They also have a nightly feature board with 3-4 additional appetizers and mains to chose from.  The wine list is quite succinct and contains a nice mix of Canadian and French wines.

Bread- It starts off very French with baguette and butter, plain and simple. 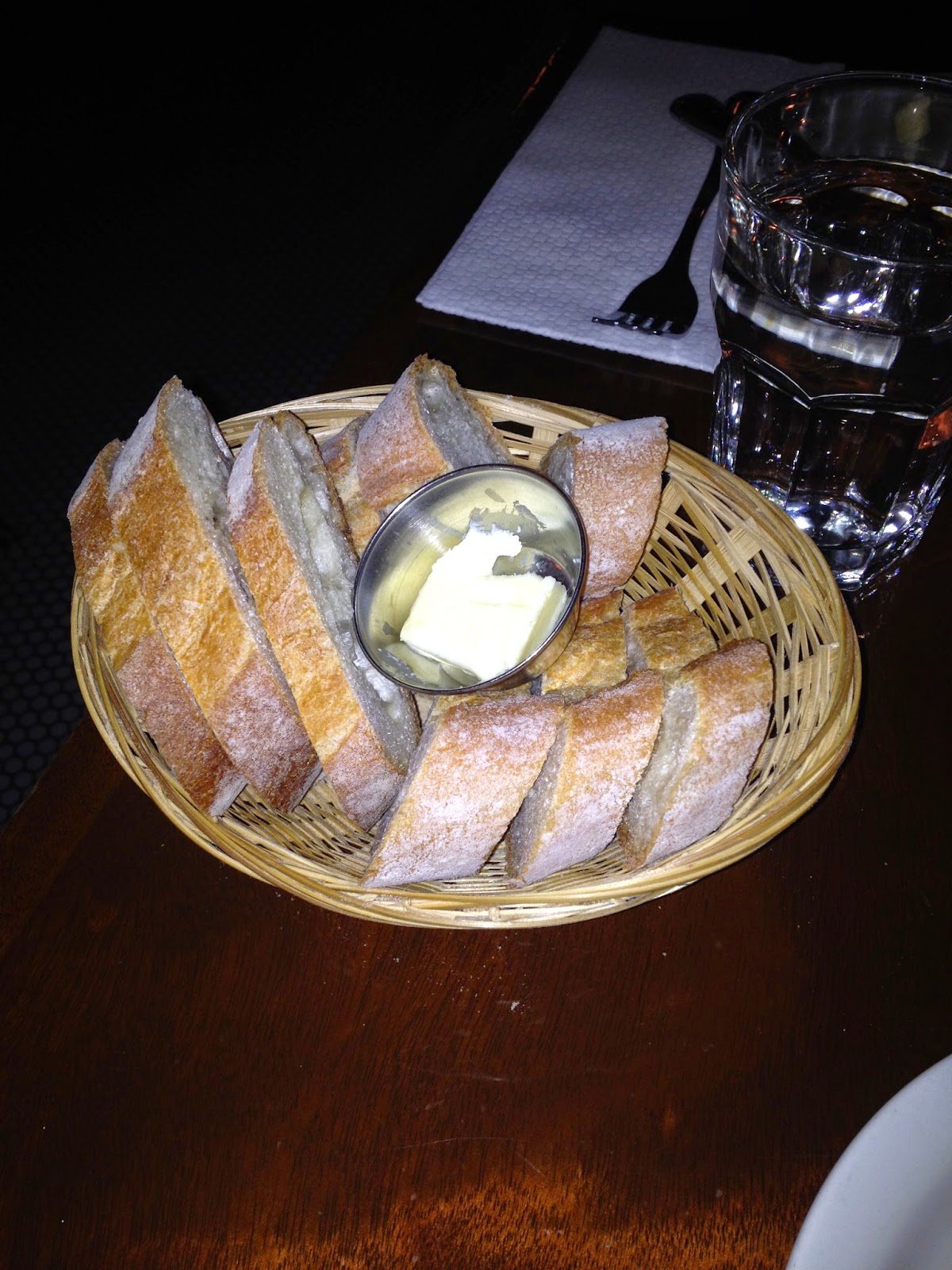 Steelhead tartare- This dish from the daily features menu caught my eye the moment I saw it on the chalkboard beside us and I am so glad I ordered it.  The chopped steelhead was complimented by herbs and was perfectly seasoned.  And for reasons I cannot explain, the little salad on the side, simply dressed with oil, salt and pepper, was particularly memorable.  I would love to know their secret! 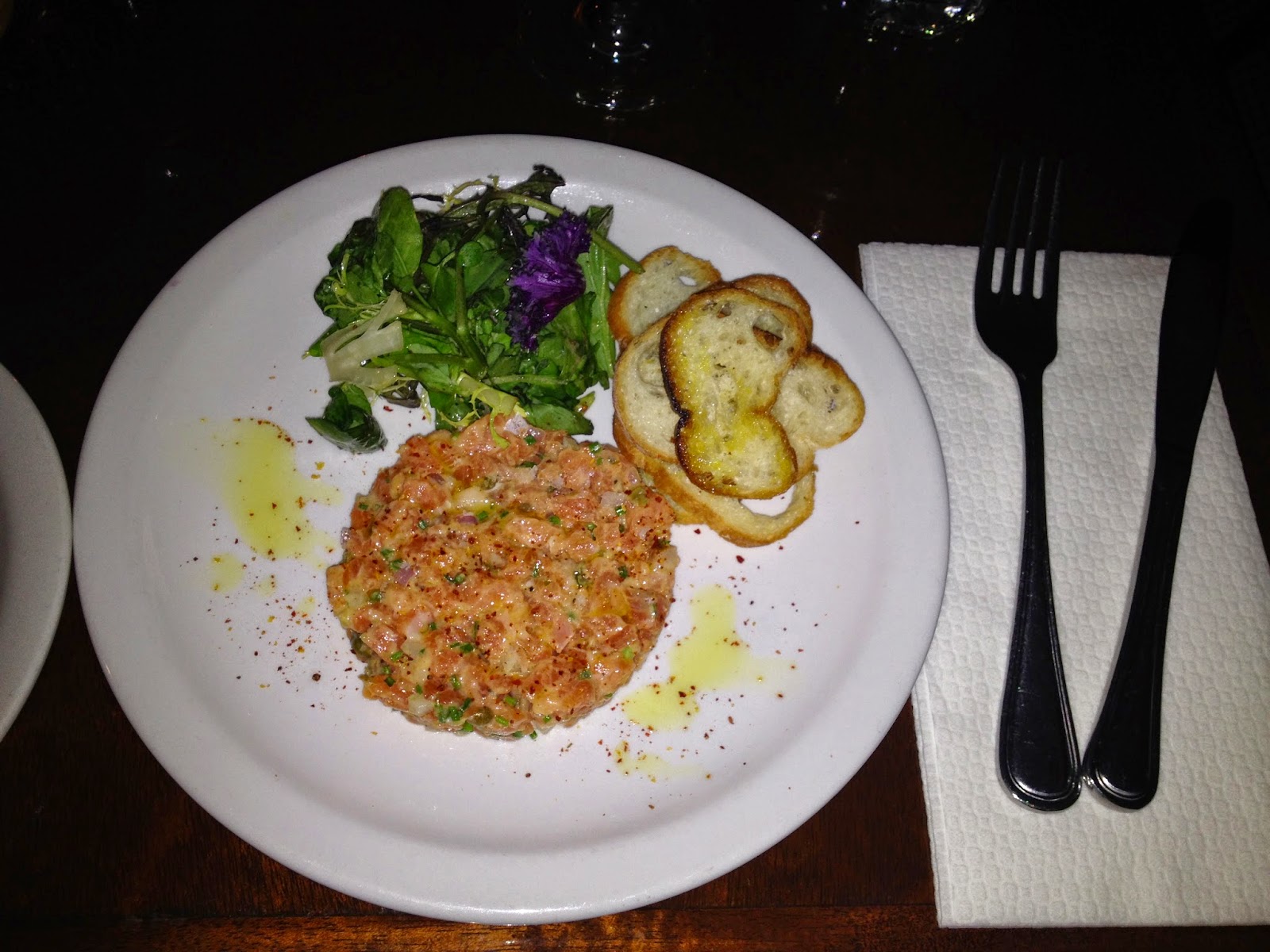 Soupe a L'Oignons Gratinee-  I had heard this was one of their signature dishes so Hubby gladly ordered it to see what all of the fuss was about.  It was served piping hot with a generous amount of cheese on the top, and a perfect onion-and-crouton soup underneath.  Hubby loved it so much he ate up every bite and "forgot" to offer me ever a spoonful! 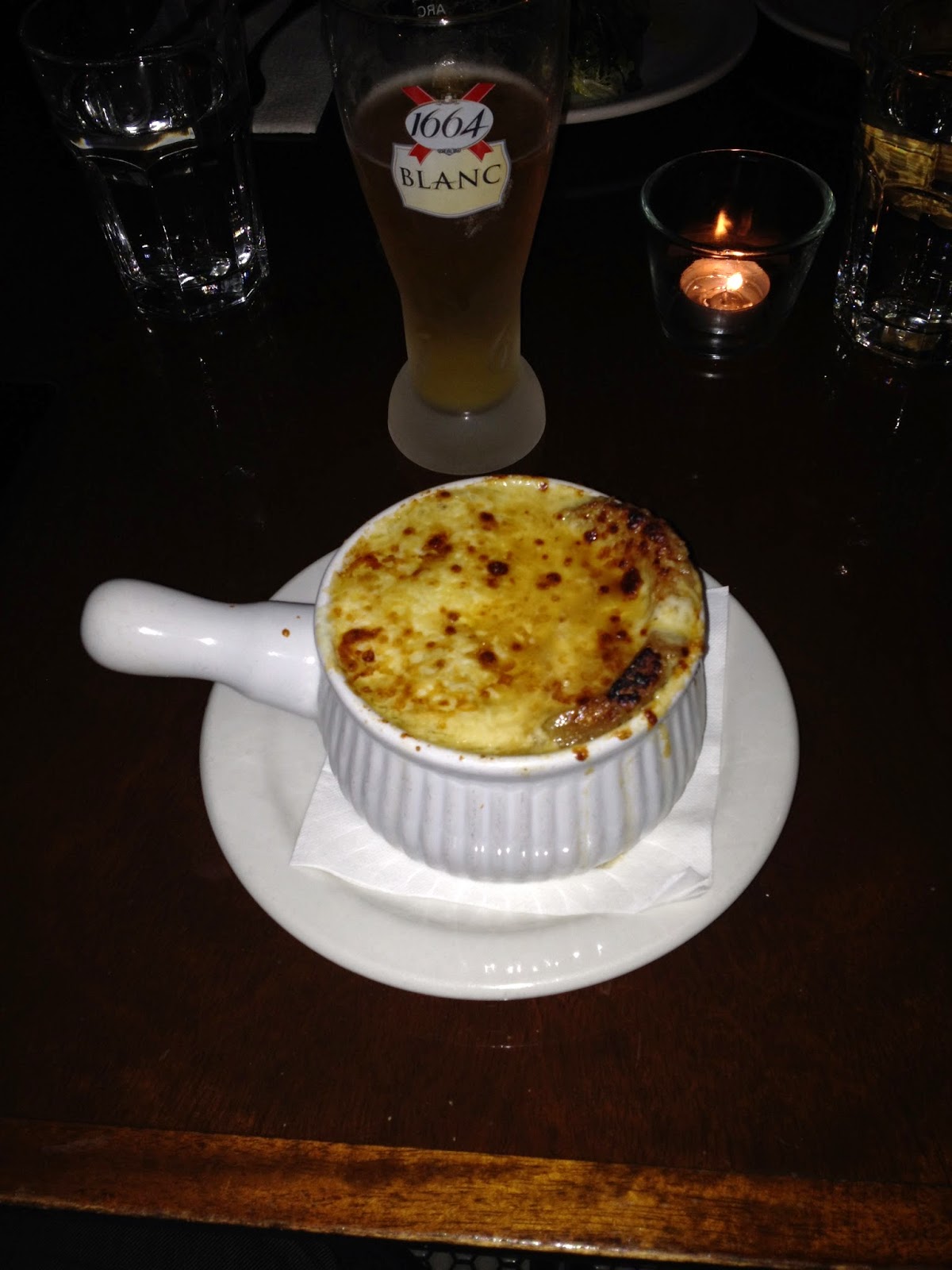 Frites- Neither Hubby nor I had ordered dishes served with fries and we regretted this decision as waiter after waiter passed with plates of them for other tables.  They looked SO good!  So you can imagine our excitement when these FREE frites with a side of ridiculously yummy aioli arrived at our table as an apology for our long wait.  Apology accepted!!! 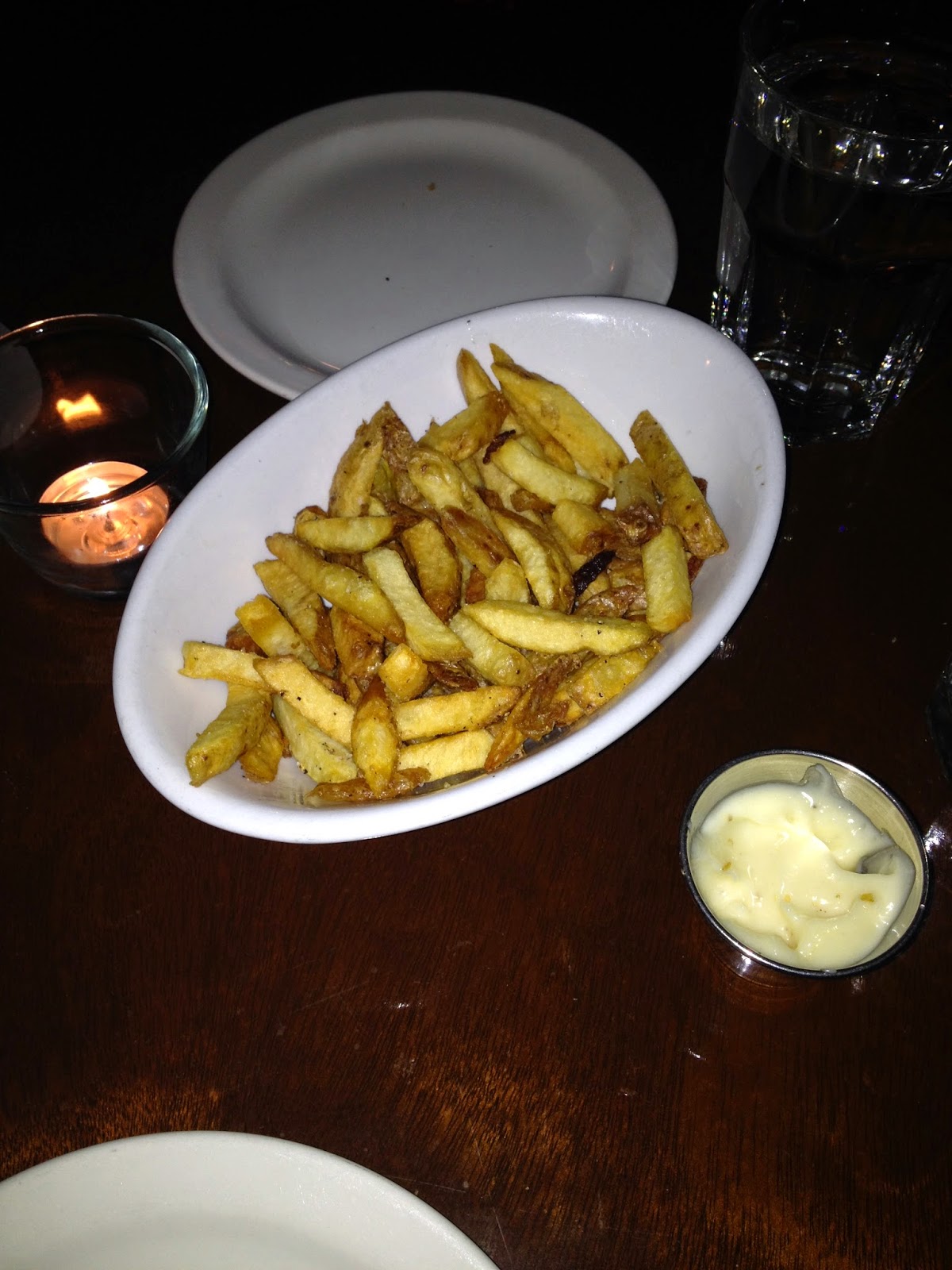 Pleurotes Royale- The French are not known for their vegetarian dishes but this is Vancouver after all so I was not surprised to find one on the menu. This dish actually resembled a meat dish, with the meaty mushrooms sliced overtop the pearl barley and spinach "risotto".   A very satisfying and hearty dish. 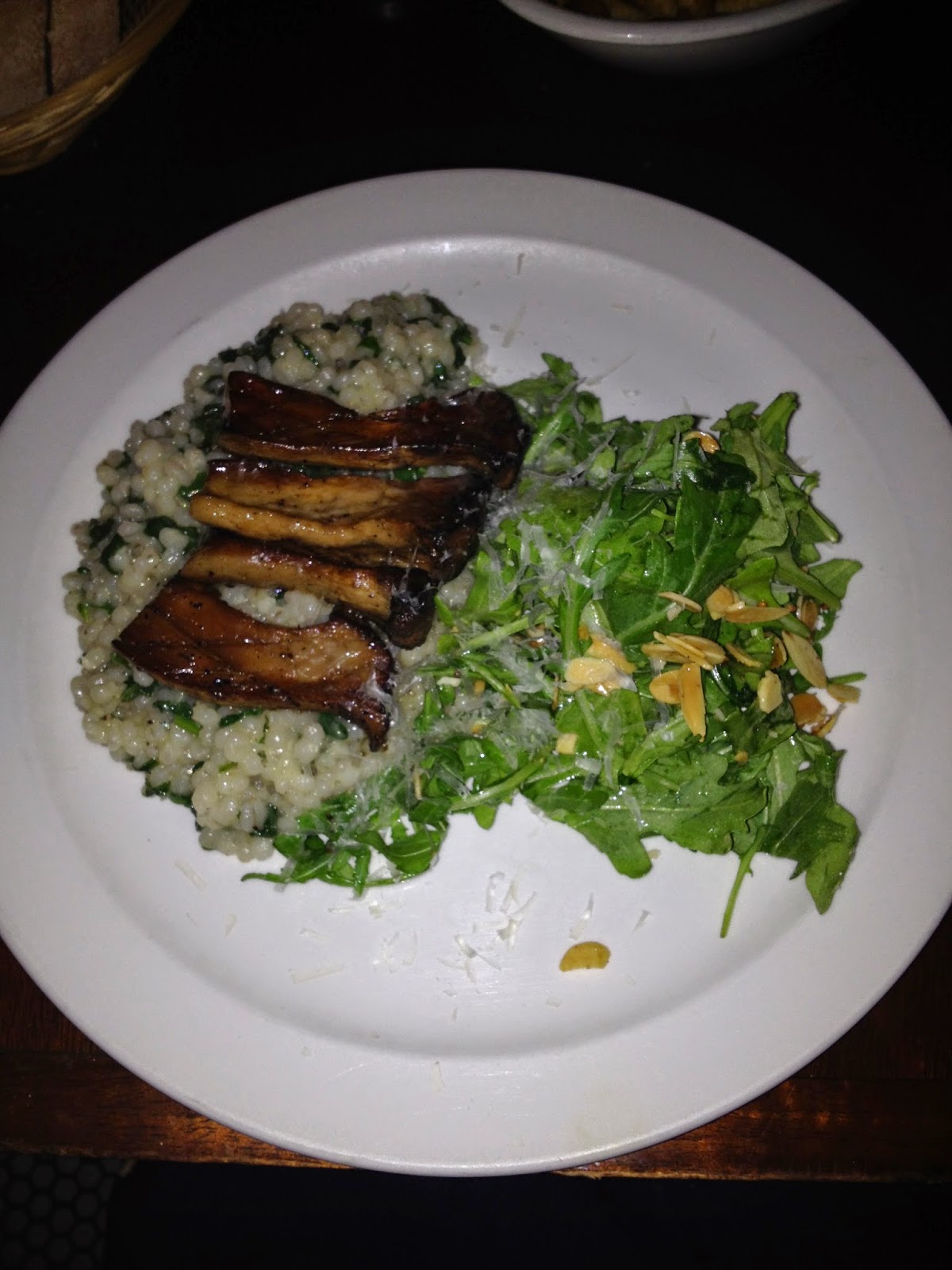 Filet de Porc- Hubby loved his main of  perfectly cooked pork (with that lovely pink center) wrapped with strips of bacon.  It was served over some plump nugget potatoes with a side of broccolini, and topped with a flavourful jus. 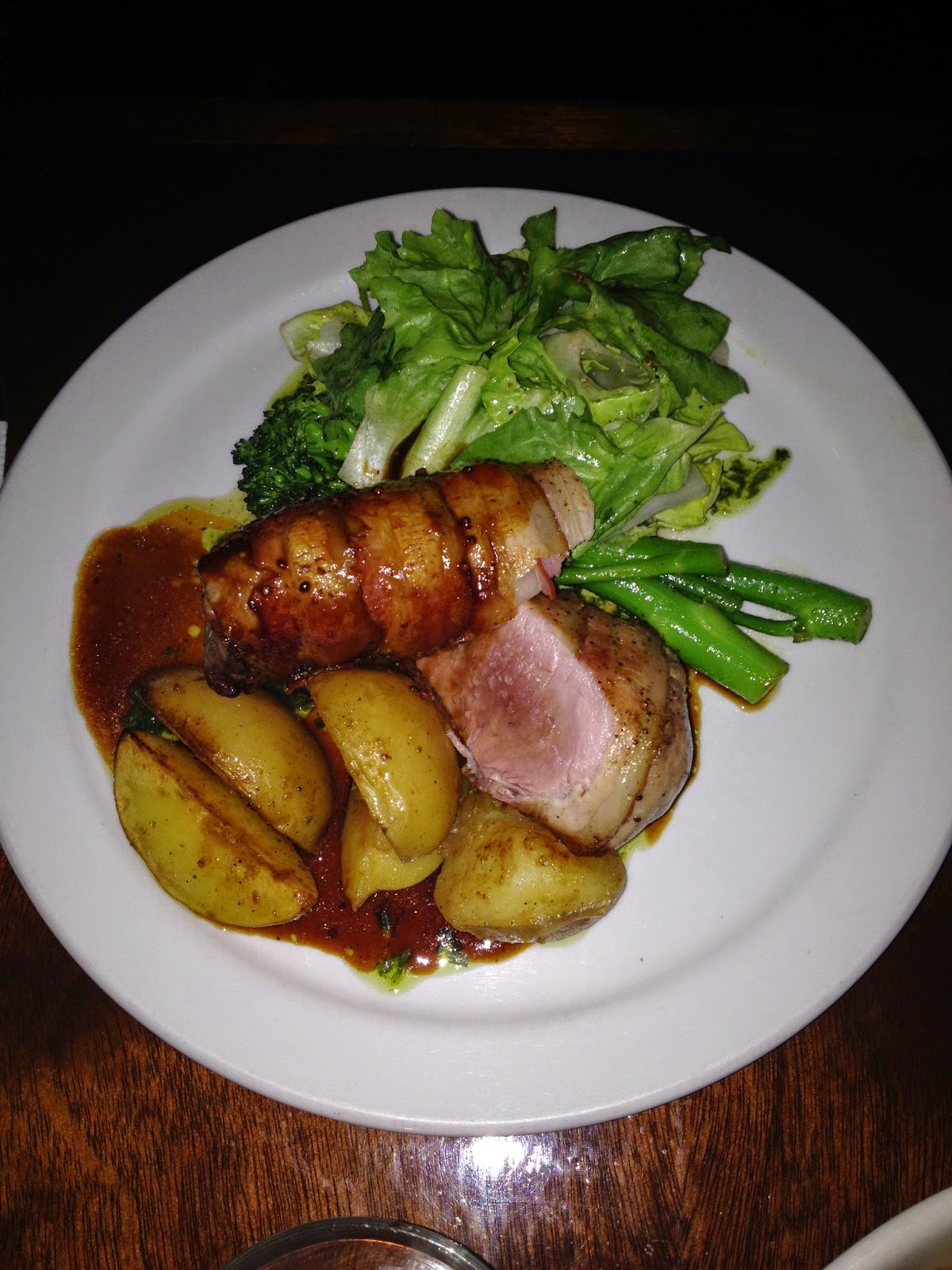 With all of the positive comments I have heard about this place over the years, I expected it to be good but this meal far exceeded my expectations.  I tend to be partial to creative, innovative cuisine but there are times when I crave a well composed, perfectly-executed meal and this is exactly what I got at Les Faux Bourgeois.

And all of this, with a glass of wine and two beer, for under $90?  That just cannot be beat.

My only regret about going to Les Faux Bourgeois last Saturday night is that I did not discover it years earlier!

Posted by Little Miss Locavore at 23:34