Locavore approved?  YES- Chef Yoshiaka Maniwa is passionate about local seafood.  Many of the items on the menu are Oceanwise (approved by the Vancouver Aquarium as sustainable seafood) and the chef is keen on supporting local fisherman.  And you can taste it in the fish- this is about as fresh as it gets.

Zest is one of Vancouver’s many hidden gems. While others sushi restaurants like Tojo’s and Miku are among the most popular spots in the city, Zest has kept a low profile and stayed under the radar.  But that is soon to change.

Tucked away at Macdonald and 16th, away from the hussle and bussel of Yaletown and Gastown, and far from the new foodie hangouts in East Van, Zest is easy to miss.  But fortunately, the folks from the Vancouver Magazine Restaurant awards took the time to venture over that way and were obviously impressed with what they found.  They awarded Zest with “Best Upscale Japanese”, a distinction that has been won by Tojo for several years previous.

From the outside, Zest is not all that impressive, but the inside is quite forma (according to Vancouver standards) with white tablecloths and white cloth napkins.  Even with these formal touches, there is cozy feel to the space.  There are only about 20 tables in addition to the seats around the sushi bar and it manages to stay decently quiet.  We liked our table in the middle of the restaurant, but the next time we would like to snag a spot at the bar to catch all of the sushi-making action.

We had the same server all night, taking our order, delivering our food, filling our water glasses and coming to check up on us.  He was very gracious, and took the time to explain the components of all of our dishes.  Like most Japanese restaurants, our food started to arrive within 10 minutes of ordering.  The progression was consistent and timely.

Zest has a unique sake and wine program.  They serve wines from all over the world, including some selected picks from BC wineries, and they have won numerous awards for its wine over the last several years.  And if sake is your thing, you will be equally impressed by their very well-developed sake menu.

I would describe the food as “modern Japanese”.  Having said that, the building blocks of the dishes are quite authentic.  It is the sauces and flavor combinations that give Zest its modern flair, and even these accents are fairly subtle.  While most ingredients are locally sourced, the chef also imports some specialty ingredients, including some of its fish, from Japan.  The lengthy menu includes a mix of traditional and original dishes, from starters to sushi to meat dishes to fish dishes.  Set menus, including an Omakase menus (24 hours notice required) are also offered.  Dishes at Zest are best shared, which allows you to try out as many dishes as possible.  Although the offerings are definitely more costly than your average sushi restaurant, Hubby and I still managed to get out for just over $100 (not including drinks) and were comfortably full.

Here is a snapshot of the dishes that we enjoyed:

Wakame Sunomono- I am a sucker for seaweed but this version was just "so-so". 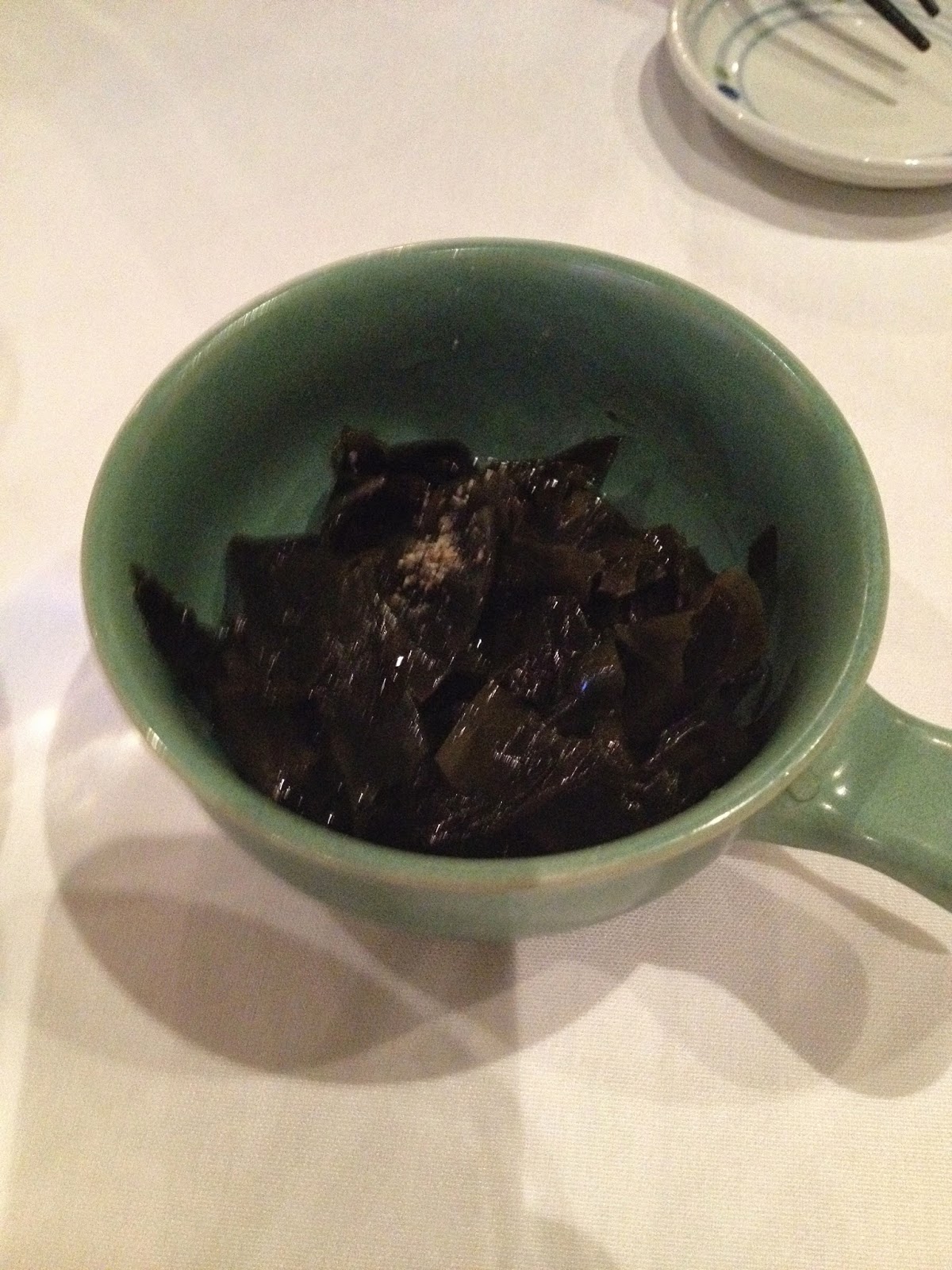 Tuna in Three Ways- A nice selection of tuna, each done with a different sauce.  My favourite was the middle one, with avocado and nori soy sauce. 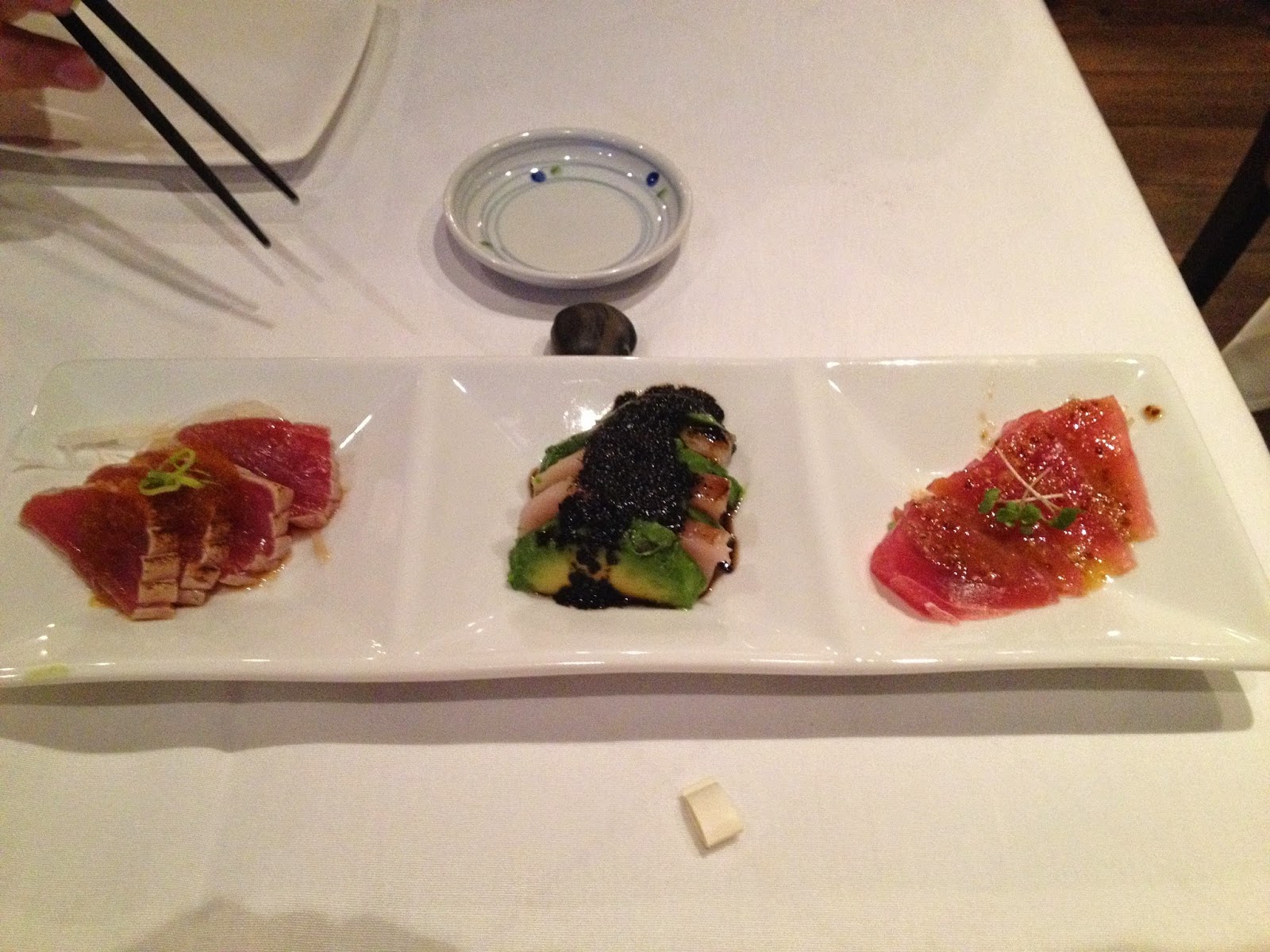 Four of a Kind Signature Sashimi- Although we enjoyed this, it was quite similar to the Tuna Three Ways and, for the steep $29 we paid for it, we could a tried several other more diverse menu items. 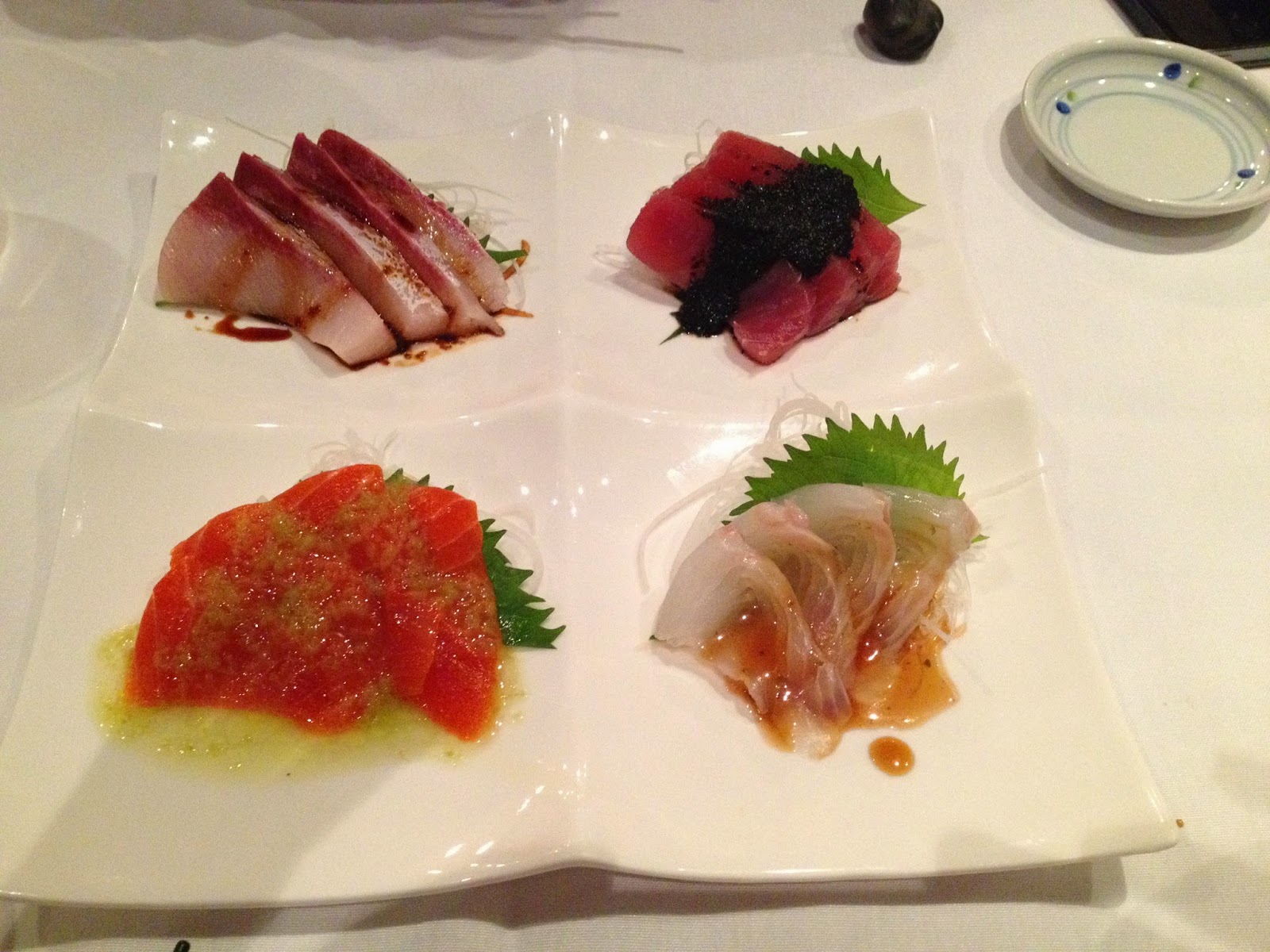 Chicken Gyoza- Hubby loved these and ate the whole plate to himself (I am not a fan of gyoza).  Really, they are meant for sharing as they are pretty filling! 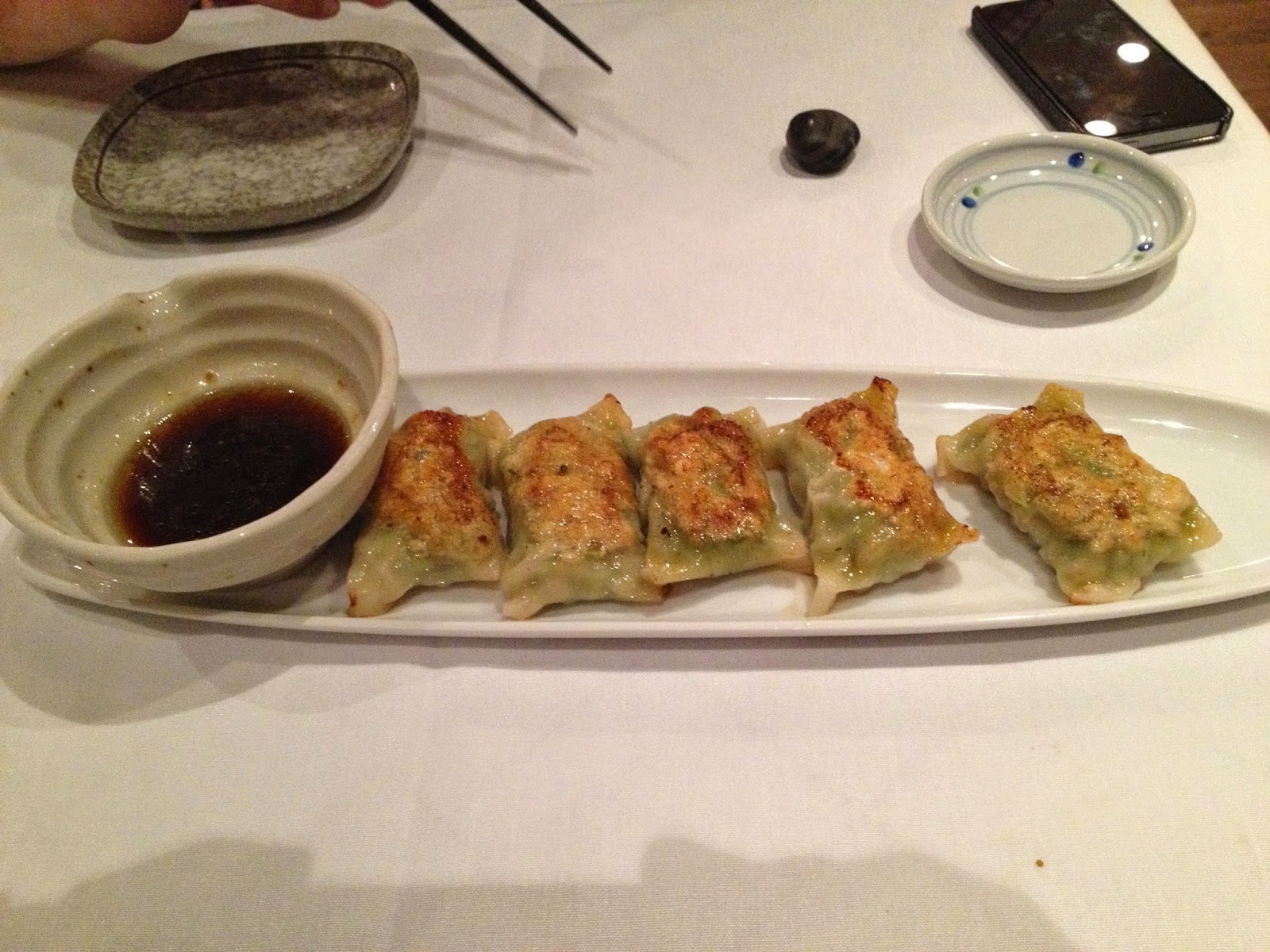 Rolls- Signature Tuna Amigos Roll and Zest Roll- These were the highlight of the night for me, and on my next visit, I will definitely be trying a few more from their very unique list of rolls.  The Zest Roll was among the best rolls I have ever had while Hubby was partial to the Signature Tuna Roll. 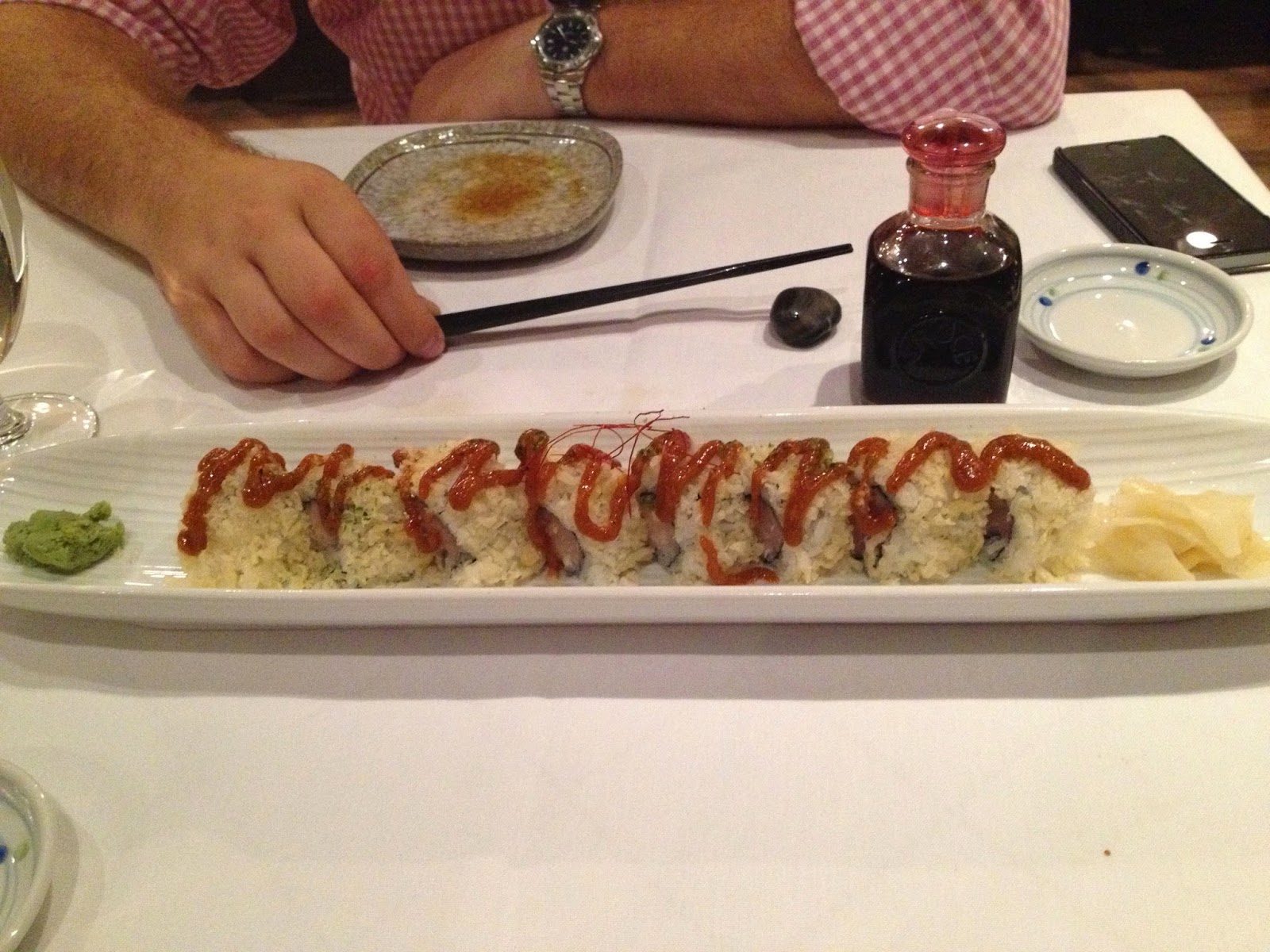 Overall verdict?
Zest is an underdog in many respects.  Its “off the beaten path” location and the relative lack of hype have kept this place a secret for most, but those that know this place love it and keep coming back for more.  I have a feeling the list of “regulars” will be expanding over the next while, especially as curious foodies like us add it to their to-go list.  Zest’s intimate atmosphere makes it ideal for anything from a date night to a business dinner so one can find many “excuses” to check it out.  While it may be pricier than your average sushi joint, the food here is way above average so it is worth the extra cost.  At Zest, you get what you pay for and then some!

Posted by Little Miss Locavore at 23:13