Locavore Approved?  YES- Although it might not be one of the trademarks of Dinner, Executive Head Chef Ashley Palmer Watt is devoted to using the freshest of ingredients from the British Isles and incorporates seasonal produce into the historically-inspired dishes that he created alongside Chef Blumenthal.

If you are at all into food, it is likely that you have heard of the infamous Heston Blumenthal.  So on a foodie tour in London, it would be almost blasphemous to leave without checking out one of his restaurants.

Blumenthal has 2 restaurants in the UK, one in the Mandarin Oriental in downtown London (Dinner) and another smaller restaurant outside London in Bray (The Fat Duck).

Since we did not have a car, and it would take us over an hour by train to get to Bray, we opted to stick closer to home and give Dinner a try.

Dinner is a mere steps from London’s Underground (at Knightsbridge station) and is housed in the historic and ornate Mandarin Oriental.  Since our reservation was not until 9pm, Hubby and I went to get a drink beforehand in the Mandarin Bar which is adjacent to the restaurant.  Although it quite an intriguing place with an upbeat atmosphere and top notch bar snacks, I should caution you that the drinks are costly (16.50 pounds for a cocktail) so there is the potential to rack up quite a bill before dinner even begins.

Just as we finished our drinks, we were invited into the dining room to our table.  I think my jaw must have dropped when I walked into the very impressive room.  It is a massive space, with very high ceilings and tables spread out as far as the eye can see. Although the décor matches that of the hotel in its formality, it has more of a modern flair.  Quite impressively, the restaurant was completely full from the time we arrived at 9pm until the time we left at 11:30pm.

At the start of our meal, the service was right on par with what I would expect from such a respected restaurant.  Our main server arrived at our table, explained the whole menu and then spent at least 5-10 minutes explaining how almost any dish could be converted into either a pescatarian or vegetarian dish as I had requested.  Although the service remained very professional and formal throughout the evening, we were left for long periods without food (our 3 course meal turned into a two and a half hour affair) and we eventually had to track down our server to get our bill after waiting almost 20 minutes after dessert.  I realize they were busy but considering this is likely the norm here, I would have thought all of the kinks would have been ironed out, especially at this price point.

The menu is quite straightforward, divided into starters, mains and desserts.  There is a tasting menu available, but only at the Chef's Table, which is located within the kitchen, requires a minimum of 4 people and is 200 pounds/person (good luck getting a reservation!).

The neat thing about the menu is that it Blumenthal has researched dishes dating back to the 1500's and then recreated them.  Beside each dish is the year that it was conceptualized and on the back of the menu, there is the source from which the recipe was taken.

When I imagined a meal created by Heston Blumenthal, I assumed it would involve lots of tricks and gimmicks in keeping with his love of molecular gastronomy.  I was surprised that, for the most part, our dishes appeared fairly mainstream, although it is possible that there may be “behind the scenes” techniques that were not readily apparent in the final product.

Hubby and I each ordered an appie and a main, and then split a dessert, which ended up leaving us beyond satiated (aka stuffed).

Meat fruit- Although Hubby is not a huge fan of liver, he could not help but order this infamous dish that pops up in just about every picture and article written about Dinner.  This was the one dish where Blumenthal’s molecular techniques really shone through.  It was remarkable how the meat was made to look EXACTLY like a tangerine, right down to the pigments and indentations in the skin.  Inside the skin was a very generous portion of foie gras and chicken liver pate, served with toast for spreading.  If pate and foie is your thing, this is a must-order, just come hungry! 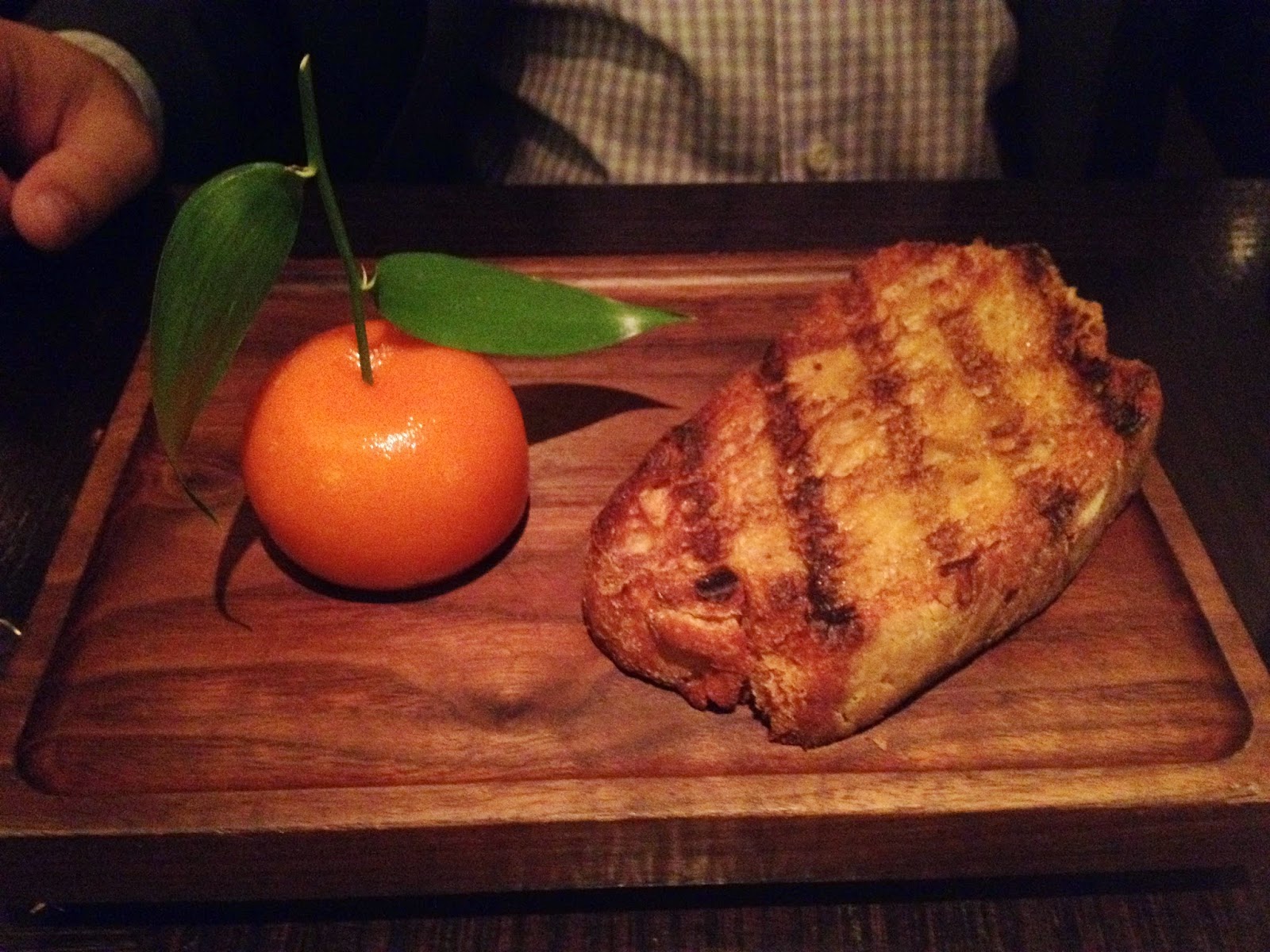 Nettle porridge (vegetarian version)- The non-vegetarian version of this dish has frogs legs, but they were kind enough to omit these for me.  My vegetarian version had mushrooms and beets (not sure how they were prepared they were particularly delicious), over top a vibrantly green sea of creamy oats.   It was certainly a very unique dish, with wonderful textures and many complementary, earthy flavors. 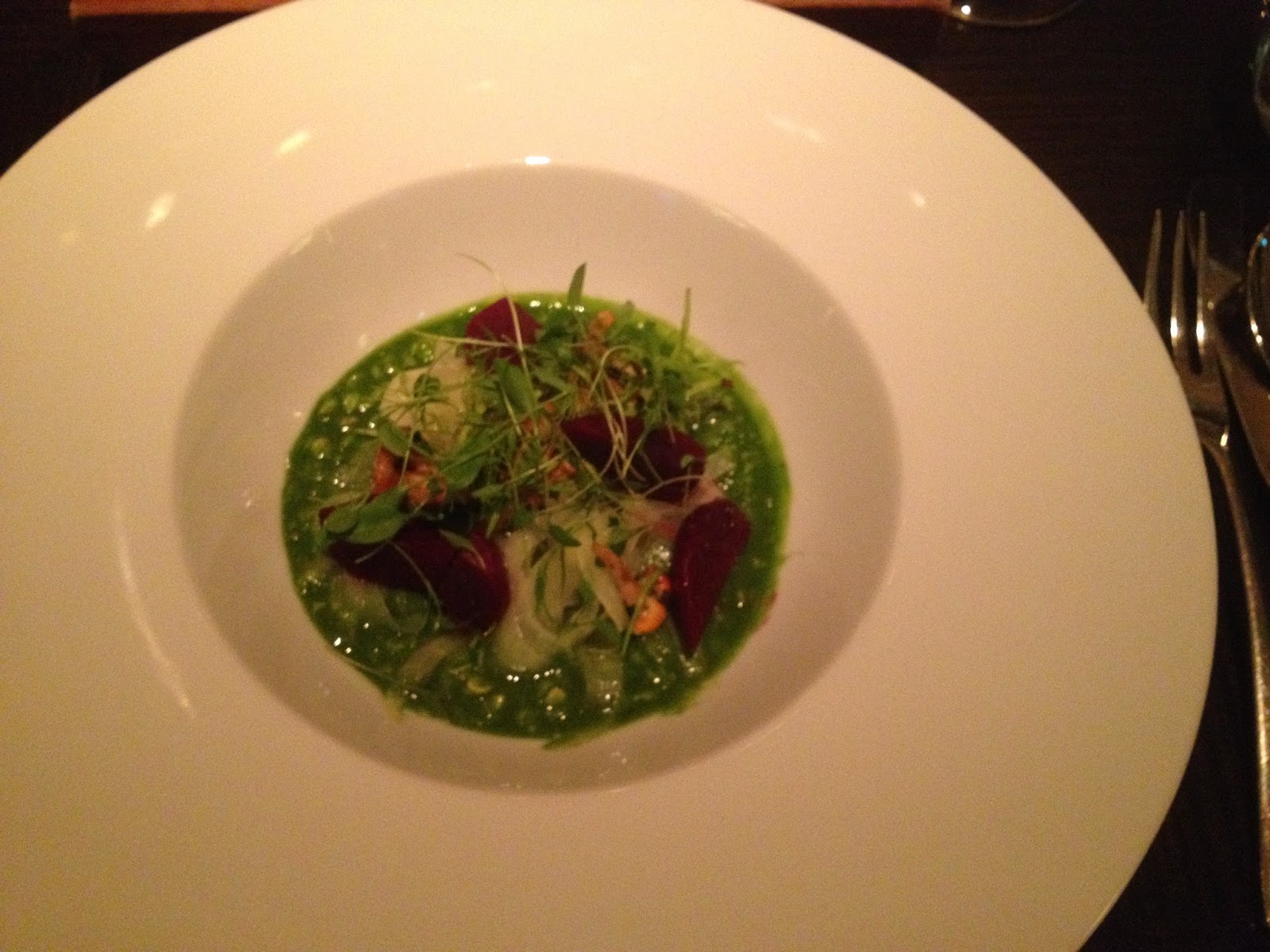 Cod in cider- Although this dish seemed quite simple, it was easily one of the best mains I have had this year.  At first glance, this dish seemed a bit boring but there was just something very special about it that I still cannot put my finger on.  Certainly, the execution was nothing short of perfection.  The delicate cod was perfectly cooked and was bathed in a mouth-watering cider-based sauce.  What I loved many even more than the fish were the sides- chard, pearl onions and the most succulent grilled artichokes. 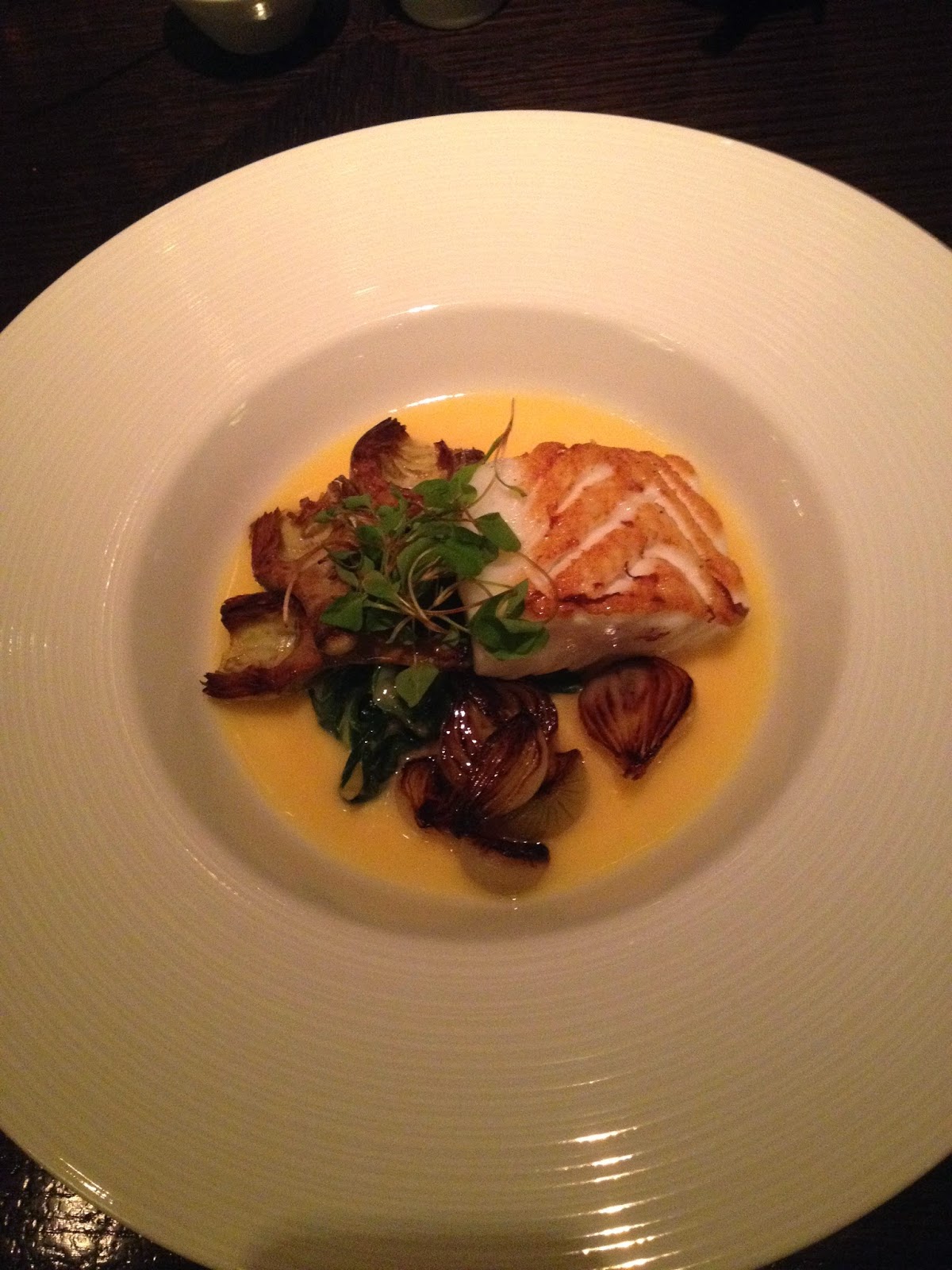 Angus beef- Again, quite a simple dish, but Hubby really appreciated the quality (and the size!) of this steak.  His only “beef” with it was that it was blood red in the middle, which was not the medium rare that he had asked for.  The twist in this dish came with the delicious sides of mushroom “ketchup” and mushroom gravy” that I eagerly used as dips to “help” Hubby finish off his side of fries. 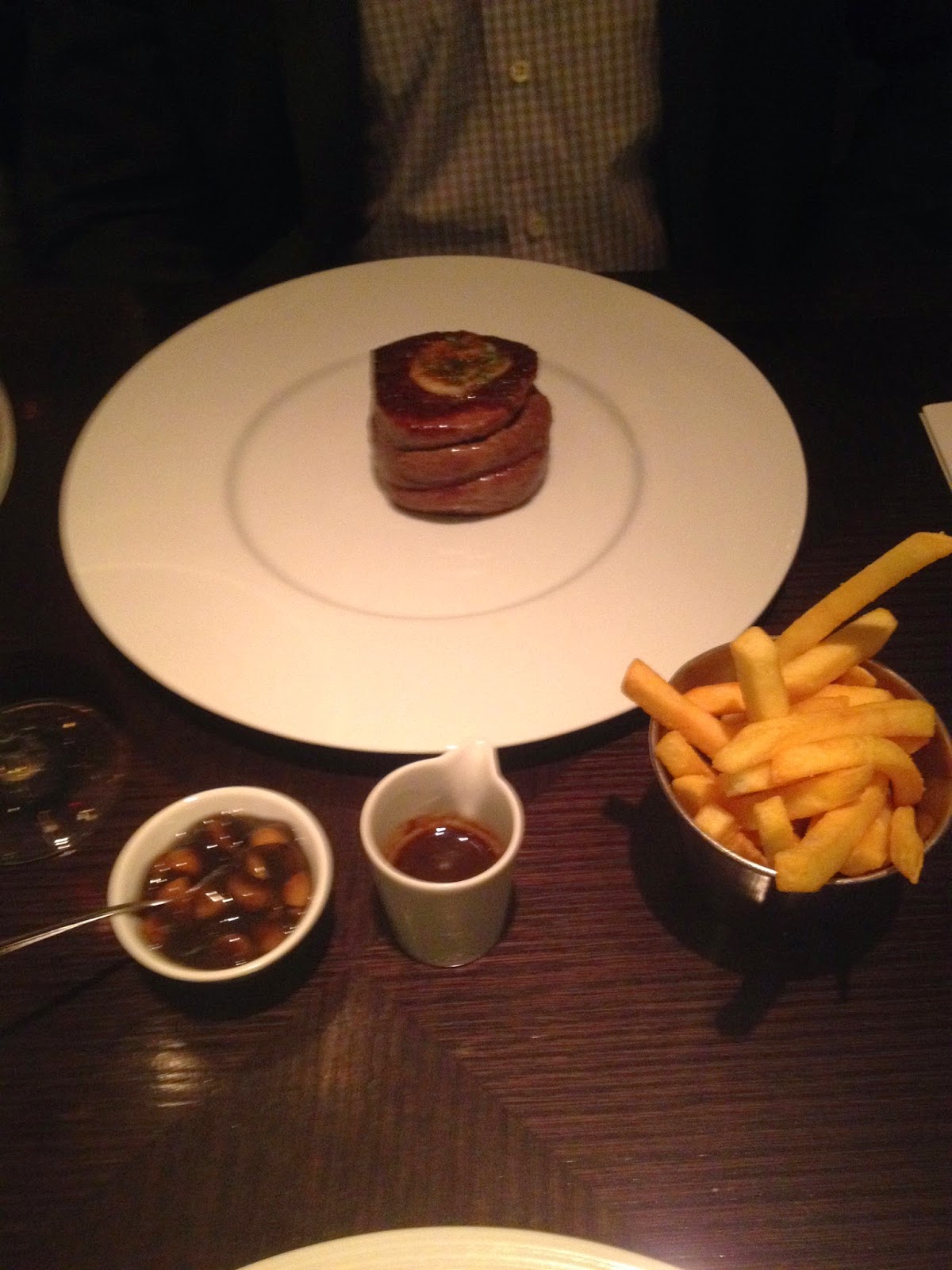 Tipsy cake- Just as the Meat Fruit is Blumenthal’s signature appetizer, this cake is his signature dessert and so we just had to try it despite being quite full.  The dish consists of a piece of grilled pineapple (we could see whole pineapples rotating on a spit inside the kitchen just for this dessert!), served beside a "cake" made out of brioche.  This is one hefty dessert (with a hefty price tag), but believe me, it is worth every last calorie. 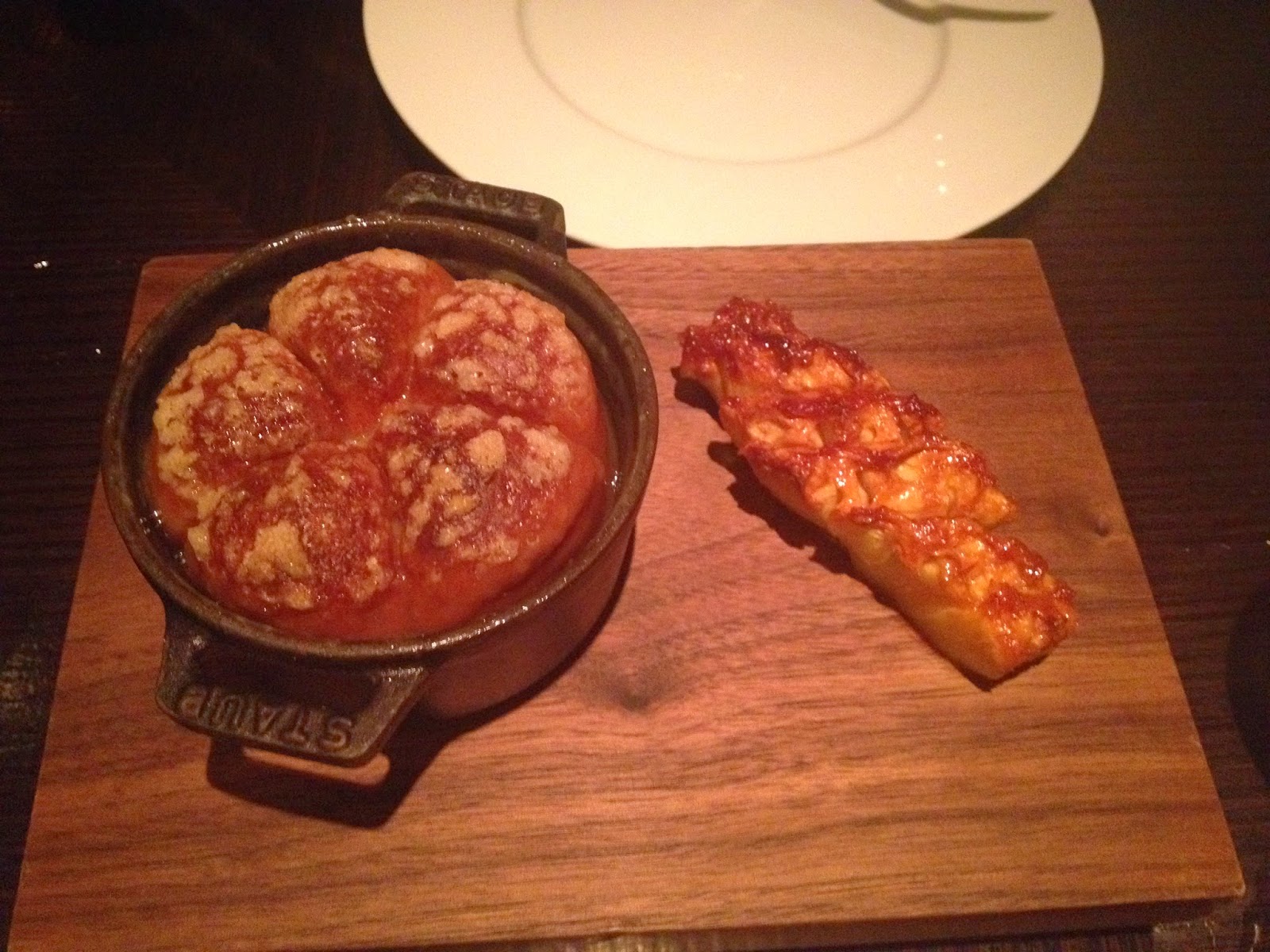 At the end of our meal, we were offered a finisher of chocolate cream with a caraway biscuit which was a nice gesture to cap off a great meal. 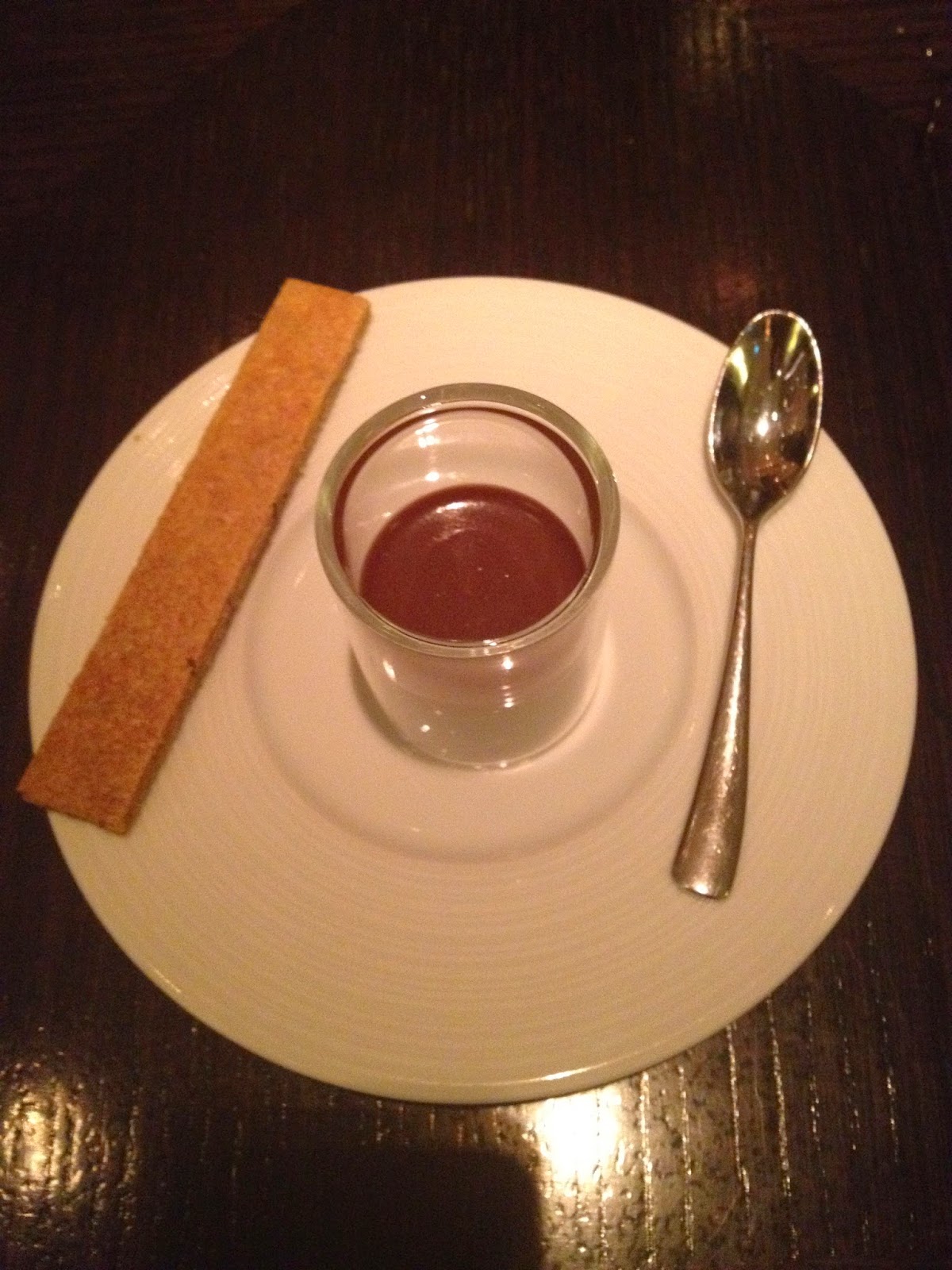 The food at Dinner is undeniably delicious, and Hubby ranks it among his best meals of the trip.  While there were some definite lapses in the service and a pretty hefty price tag for a 3 course meal, our experience at Dinner left us yearning for more.

I guess that can only mean one thing- a foodie pilgrimage to the Fat Duck!

Posted by Little Miss Locavore at 22:56