Locavore Approved? Not really- Of course, all of the ingredients here were extremely fresh and I am sure that there was local produce used in the creation of our dishes, but the focus here is more on deluxe ingredients than local ones (sometimes these go hand in hand and sometimes they don't).  The dishes on the menu do not seem to change as often as some of the other places we visited in Paris (Septime, Chateaubriand).

From the time we began planning this trip many months ahead, Atelier Joel Robuchon was the restaurant that Hubby was most looking forward to.  He tends to like going to the culinary mecca's of the big name chefs more than I do (I prefer checking out the less well-known gems) and, having never been to one of Robuchon's restaurants in the past, this was a must for him.

A word of caution- there are actually two Robuchon restaurants in Paris, St. Germain and Etoile.  I am sure they are both very good (both have 2 Michelin stars) but we wanted to dine at the St. Germain location which is the original Atelier.  We also preferred dining in St. Germain over the Champs Elysees where Etoile is located as it was both closer to Marais where we were staying and less touristy.

Upon finding Atelier St. Germain on a chic side street quite close to the Notre Dame cathedral, you will  note its rather non-descript exterior with a simple black awning located adjacent to a hotel.  We were also rather surprised to fine an elegant yet very casual interior which is apparently Robuchon's new style after he came out of retirement in 2003 to open Atelier St. Germain.  Guests have the option of traditional dining at tables in the back, or right in the action around the bar out front.  We chose to sit at the bar so that we could watch all of the action in the semi-open kitchen.  It resembled an upscale sushi bar and was apparently built to replicate just that.  Besides the entertainment of watching the chefs hard at work, the bar also offers the opportunity to chat with other diners throughout the meal.  We were fortunate enough to be seated next to two lovely couples and we chatted away the whole evening.  Although the traditional dining room may be the better choice for a business meeting or romantic soiree,  we felt that our interactive experience at the bar made our evening that much more special and enjoyable. 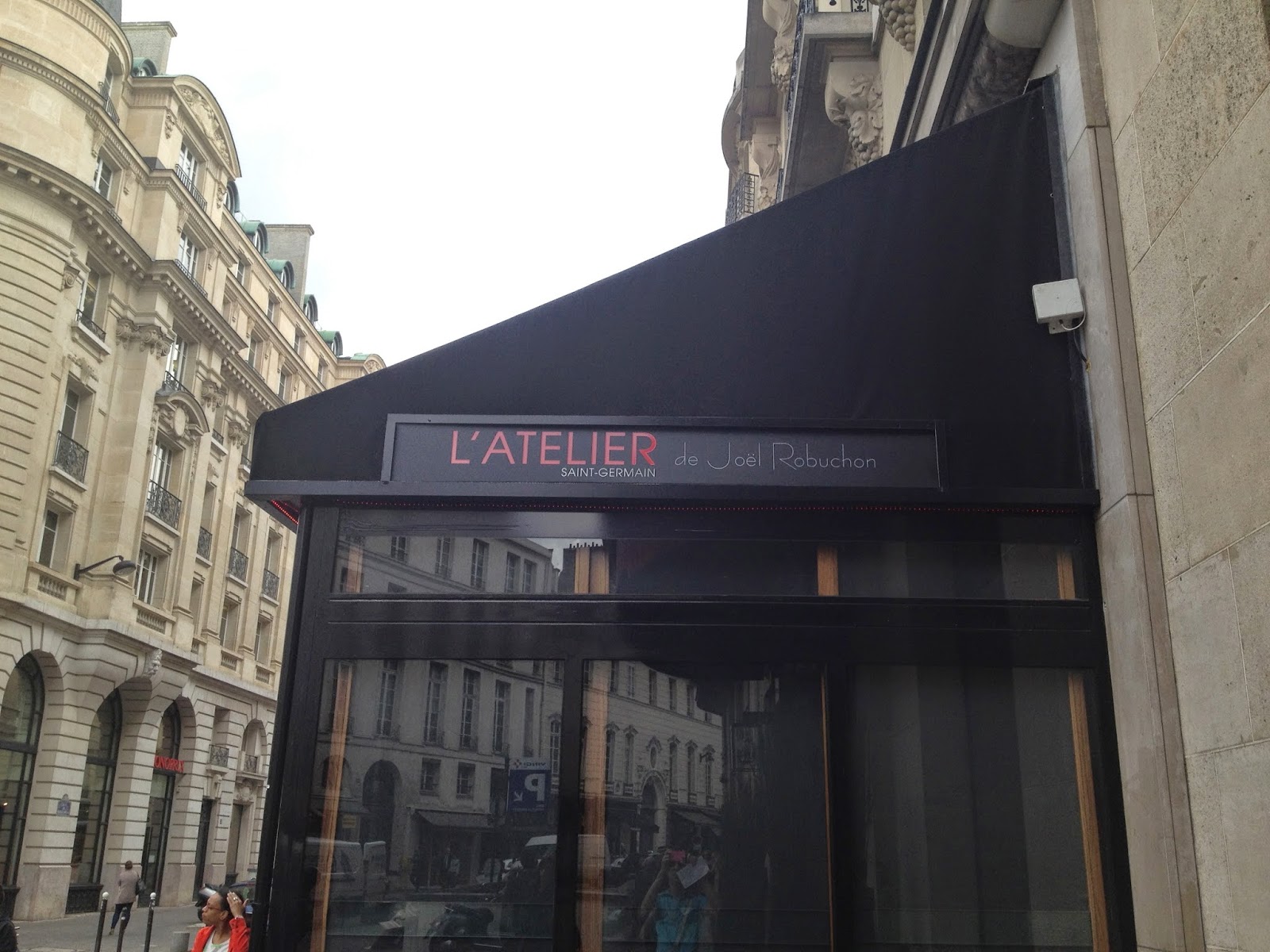 On previous online reviews, I had read quite a few snarky remarks about "horrible service" and therefore, was a bit leery of us being treated in the stereotypical rude Parisian manner (which, for the record, we certainly have not experienced anywhere in the city).  We had a number of servers who all remained behind the bar for the whole evening and they were all very personable.  By the end of the night, we were joking with them about the FIFA world cup which was on at the time.  They showed great enthusiasm in talking about the food, and were happy to offer dish descriptions in English.  After dinner, they even took one young boy into the kitchen to meet the sous-chef and take pictures.  They could not have been more accommodating.

My only little quibble with the service was that I had called ahead to request a pescatarian menu which they said they would make note of but when I arrived it had not been noted and there was a question of if it could even be done.  In the end though, the chef kindly obliged.  Also, some may not appreciate the fact that they have to show up early and line up for the first seating at 6:30 before they even open (this is the only seating for which they take reservations) and then gradually trickle in when the hostess gets to you but because I knew this ahead of time, this was not really a huge deal for us.

Guests have the choice of dining either a la carte or opting for the multi-course tasting menu.  We absolutely loved the tasting menu and highly recommend going for it.  Having said that, we did see some pretty amazing a la carte options across the bar so that option is likely also a great one for those who do not want to splurge on tasting menu.

Ou tasting menu was spectacular overall, and Hubby maintains that it was his favourite of the trip.  Having said that, we both felt that the meal started off with a bang, took a little dip in the middle with a few "just ok" dishes and then picked up steam again at the end with some great desserts.

Here is the rundown of our menu.  Our favourite dishes have accompanying asterisk and brief description.

***Le Crabe Royale (amuse bouche)- It was amazing that such yumminess could fit into a few bites. The Japanese flavours were a fitting start since we were sitting around the bar. 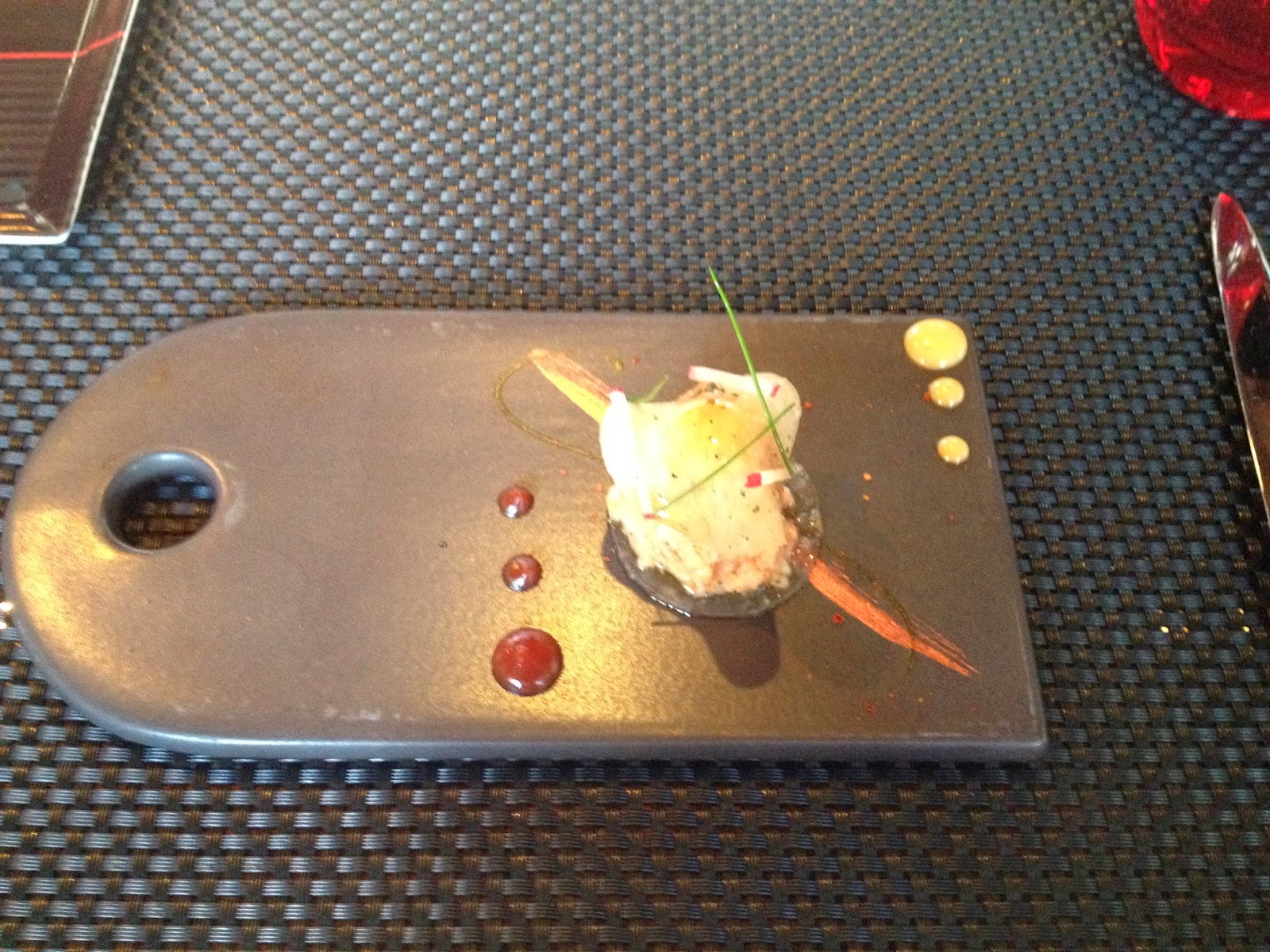 ***La Tomate- I am not at all a gazpacho fan but this was admittedly out of this world. It was creamy and with the freshest of tomato flavour.  What really hit it out of the park was dijon mustard ice cream (yes, you read it correctly) and a few croutons to top it off.  Amazing!!! 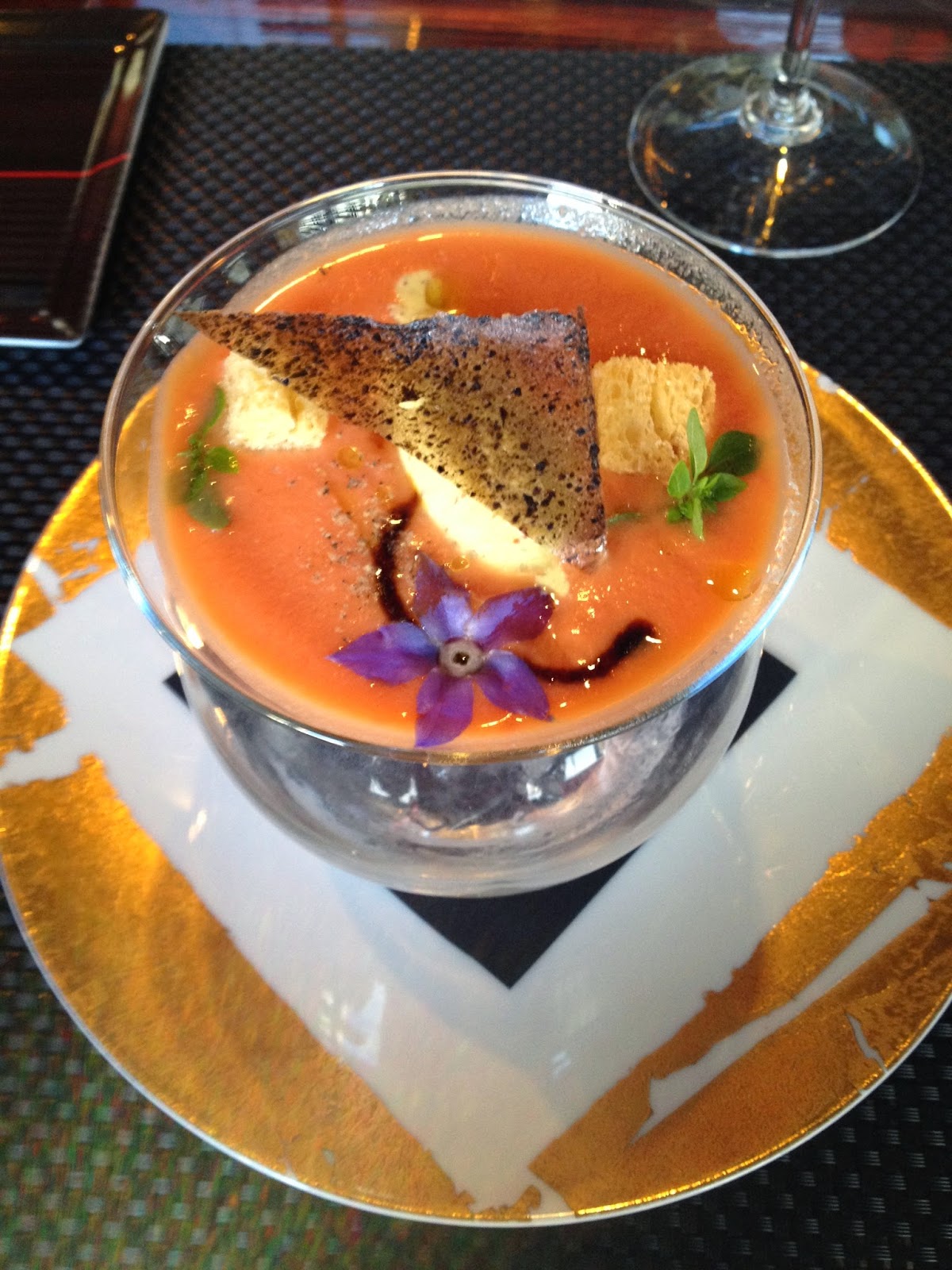 ***Le Caviar- The delicious lightly cured salmon would have made this a great dish in itself.  And then you add a generous dollop of caviar.  Even better.  But the real surprise of this dish was the half-cooked egg mixed with maple syrup.  It should not have worked, but it so did.  This was the best dish of the night, and even one of the best dishes of our trip. 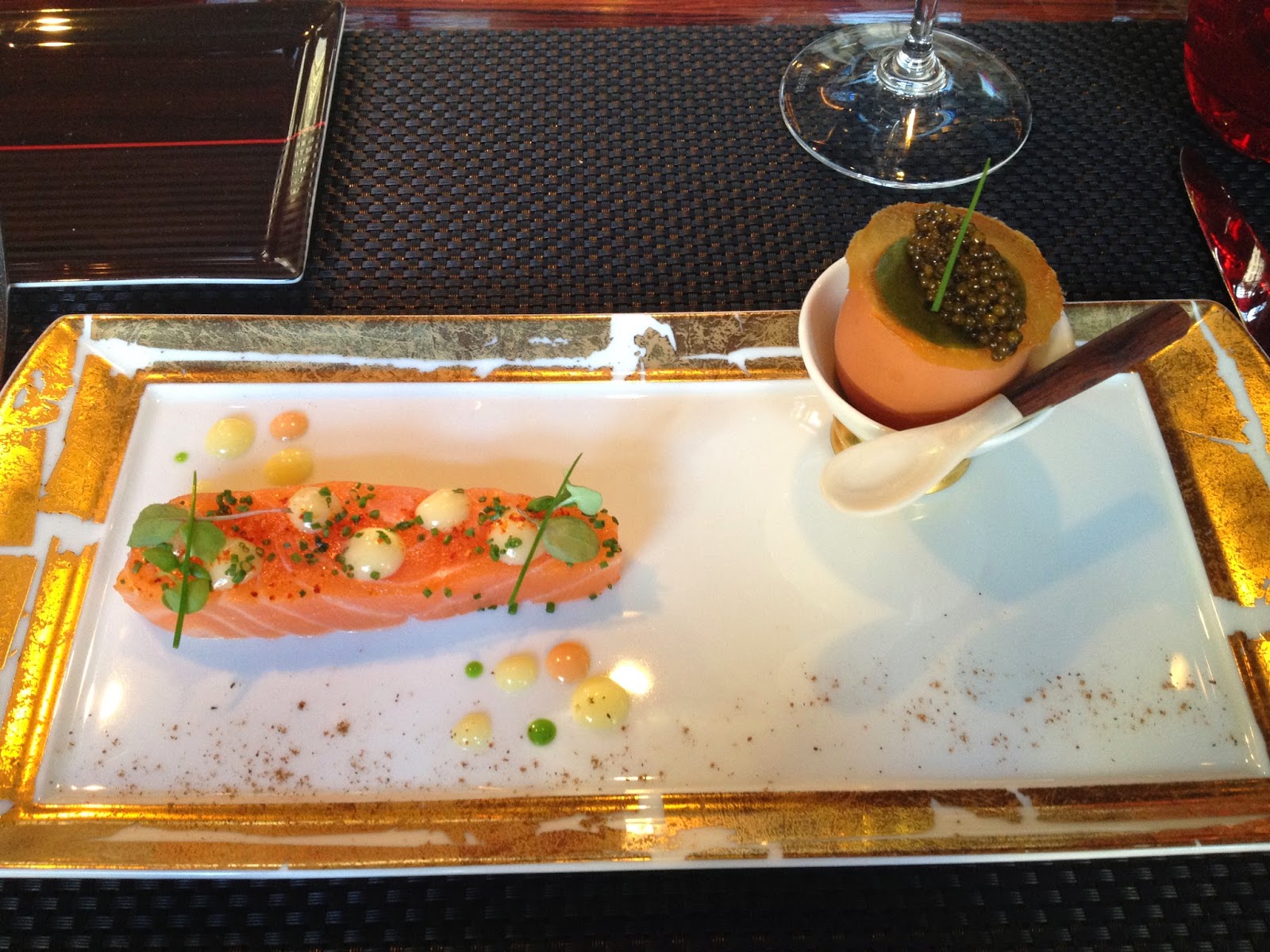 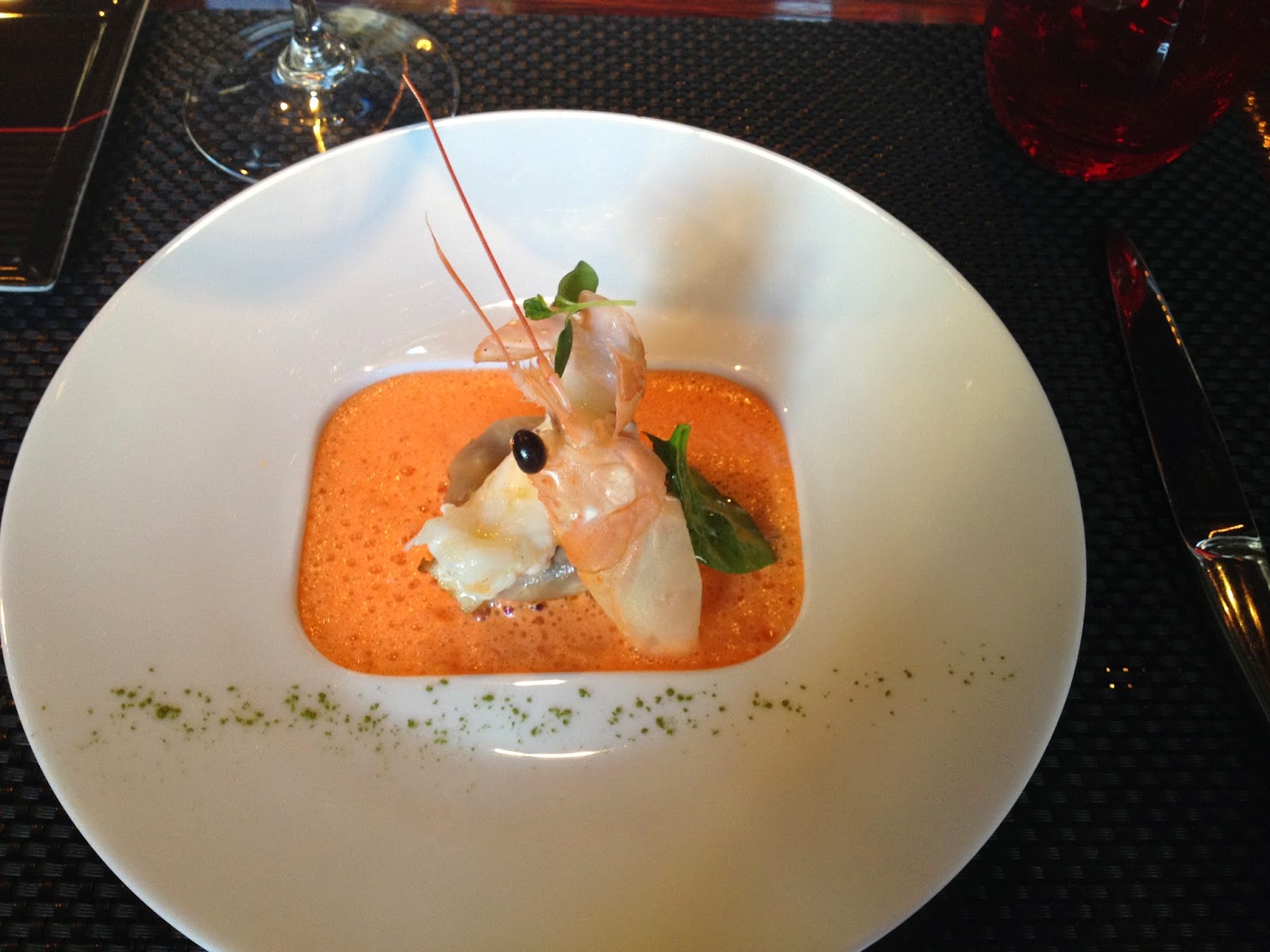 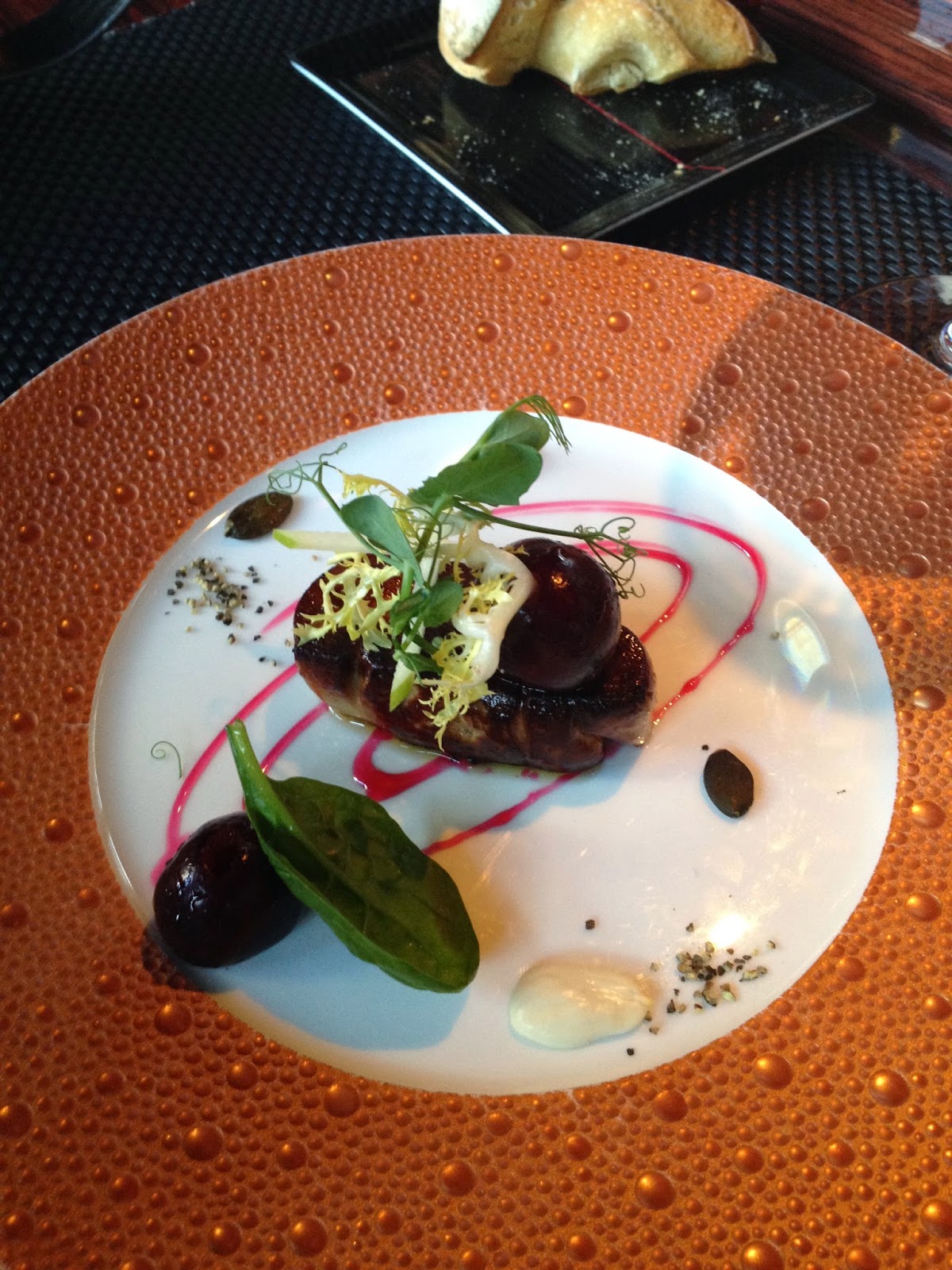 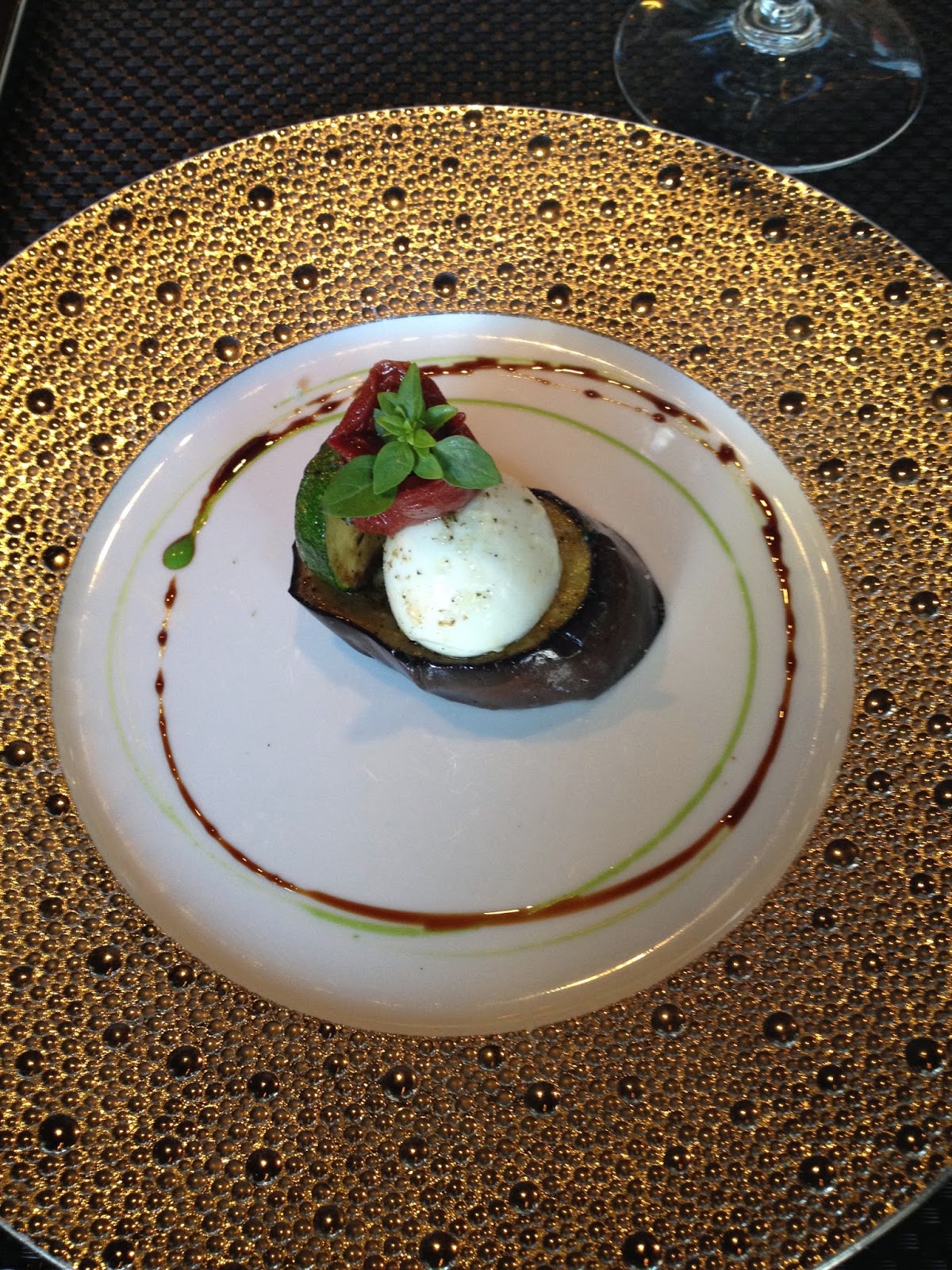 ***Gyoza- Hubby swooned over this dish.  He loved the Asian-inspired broth beneath the little dumplings filled with chicken and spices. 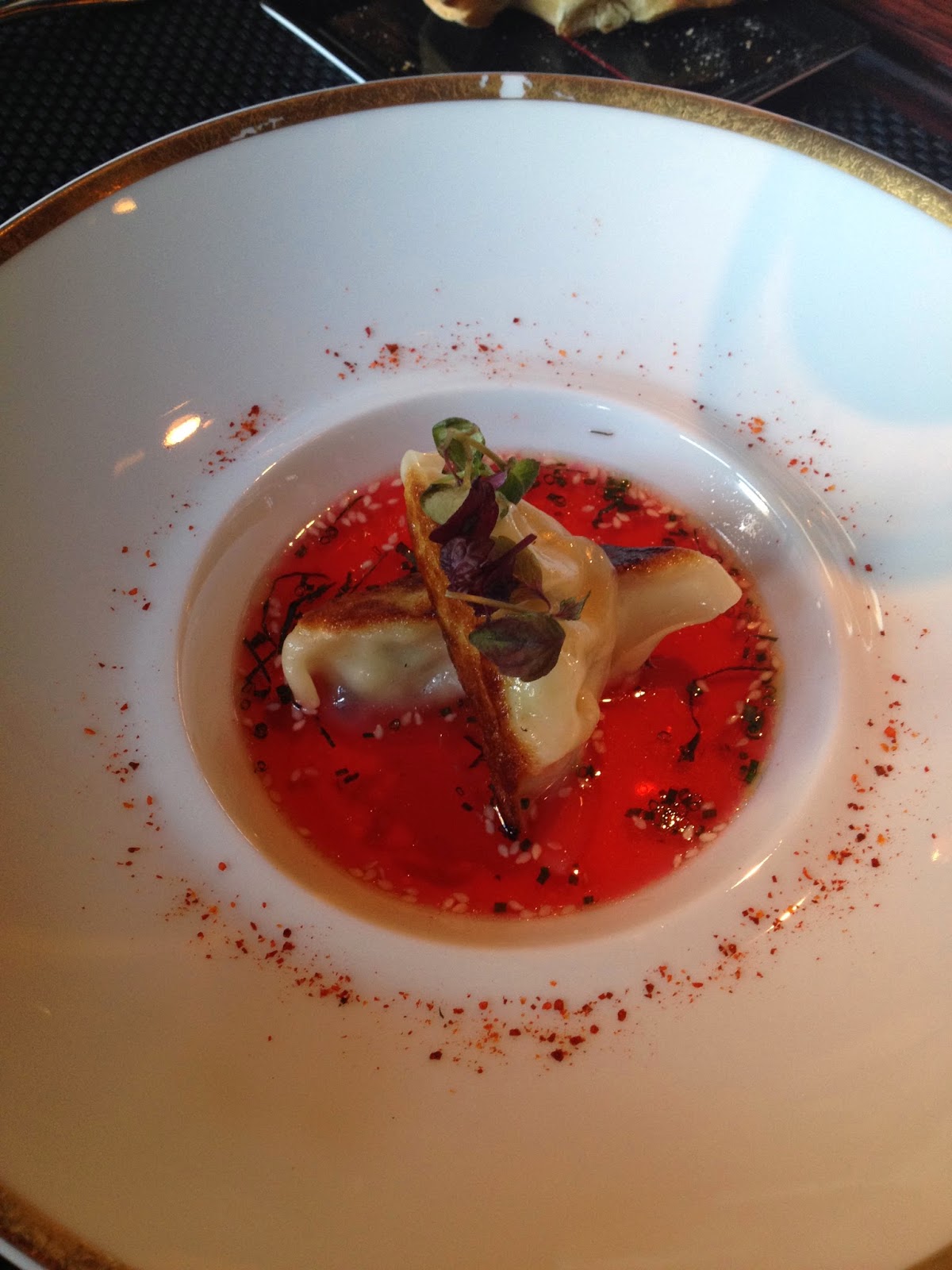 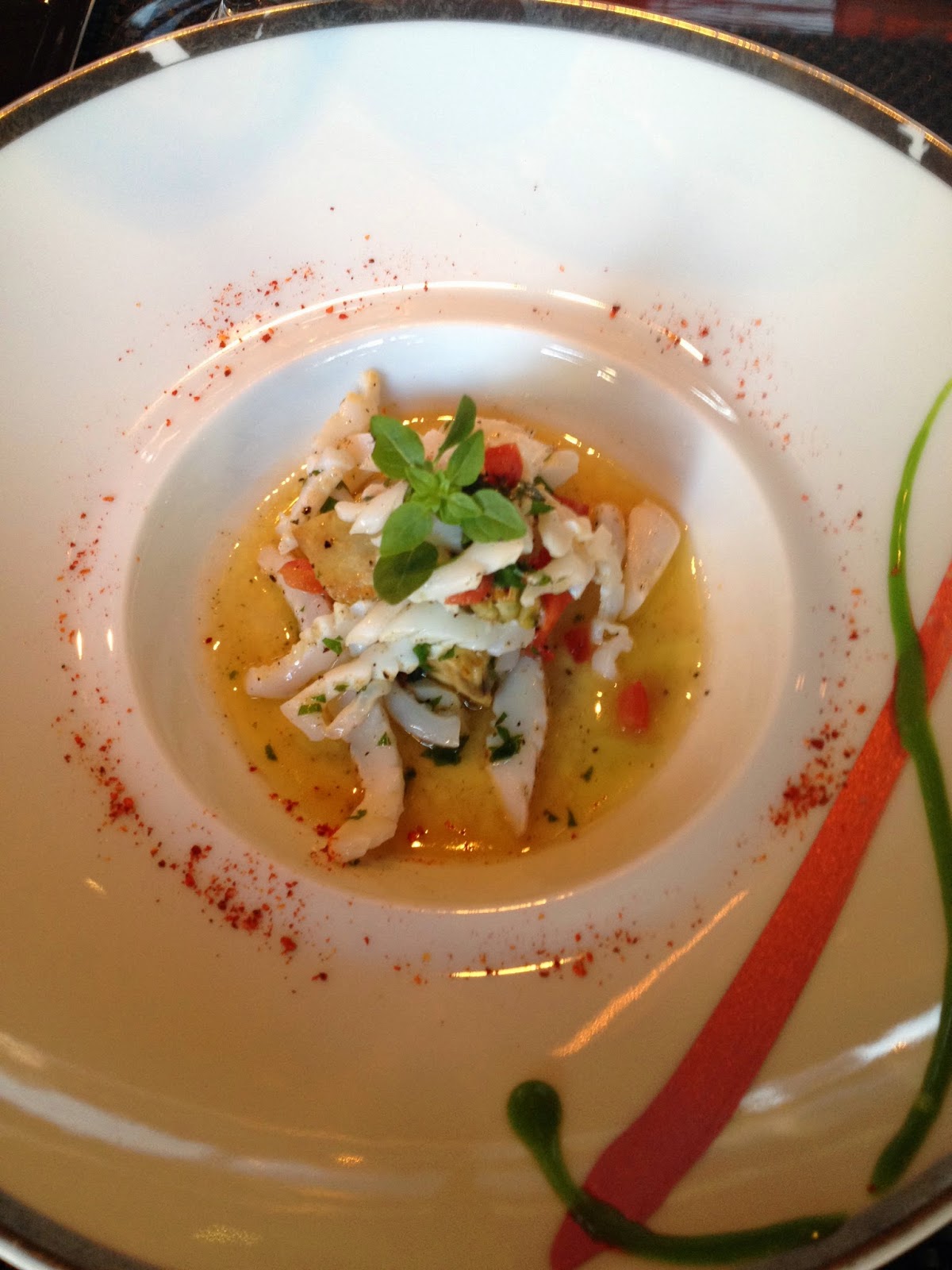 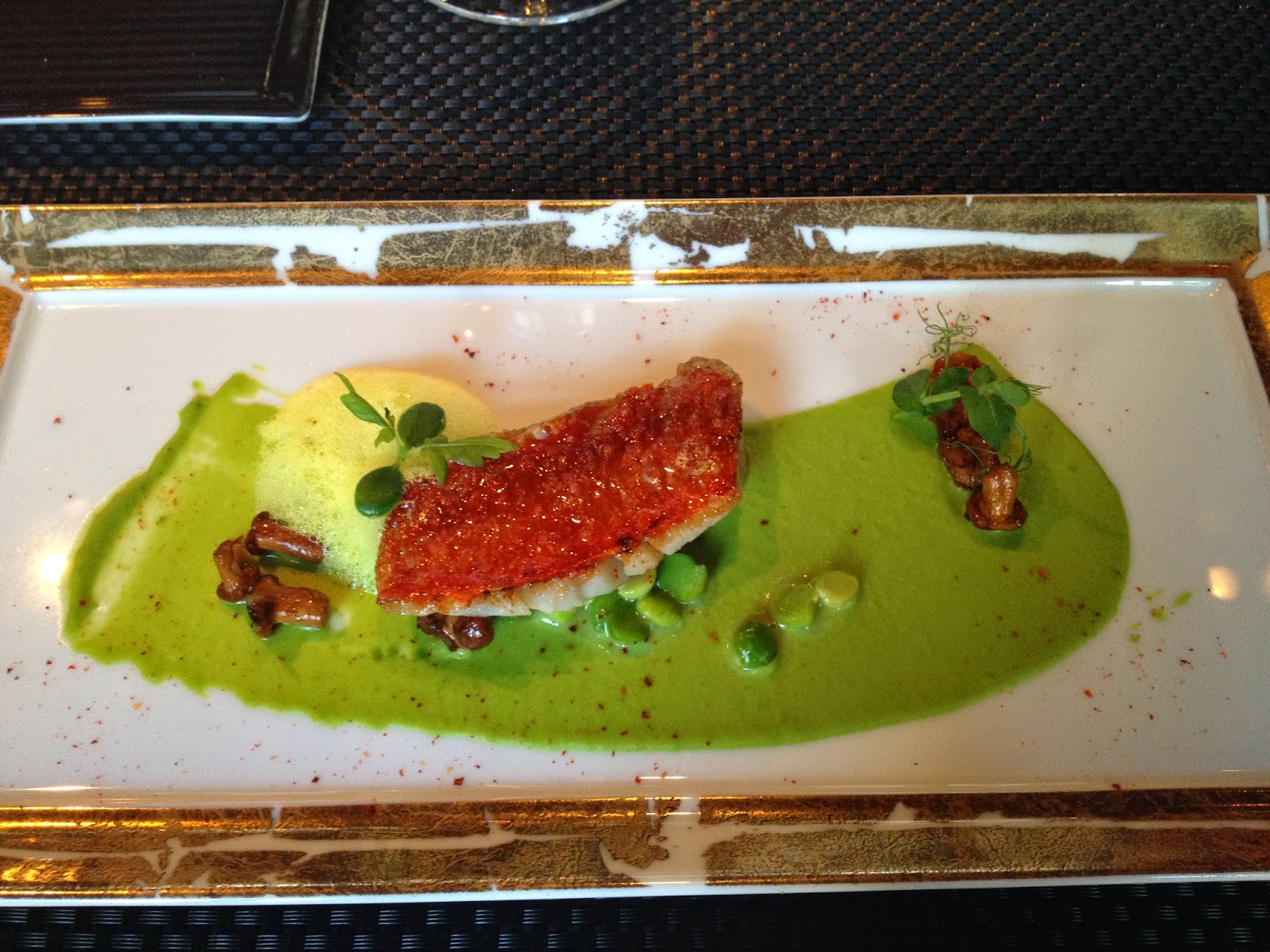 ***La Caille- This squab dish is said to be one Robichon's signature dishes so Hubby just had to get it (there were 3 options for the entree).  The bird was stuffed with foie gras, served with Robichon's famous mashed potatoes, and then covered (and I mean totally covered) with shaved truffle.  There can be no more decadent a dish and Hubby loved it. 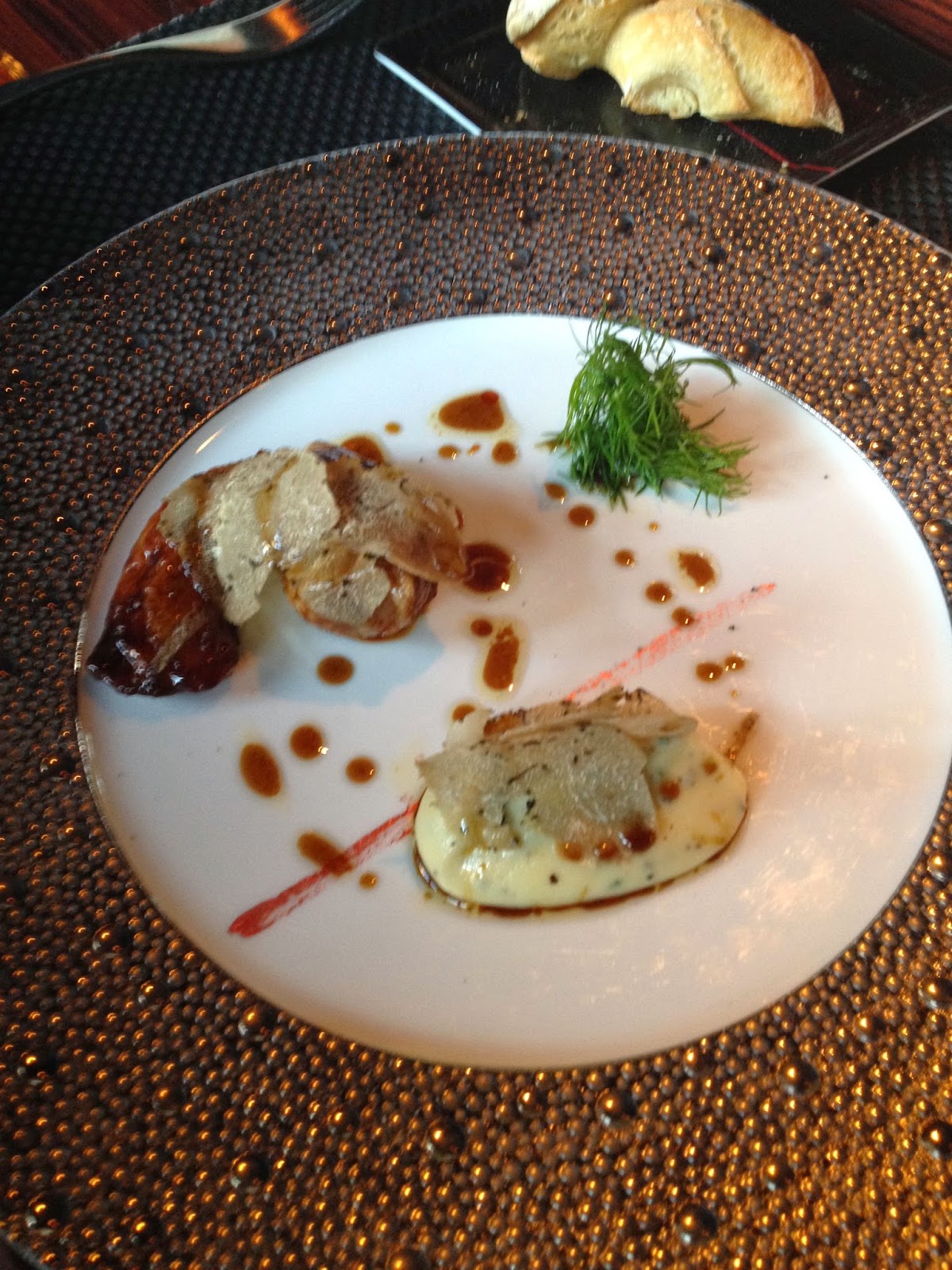 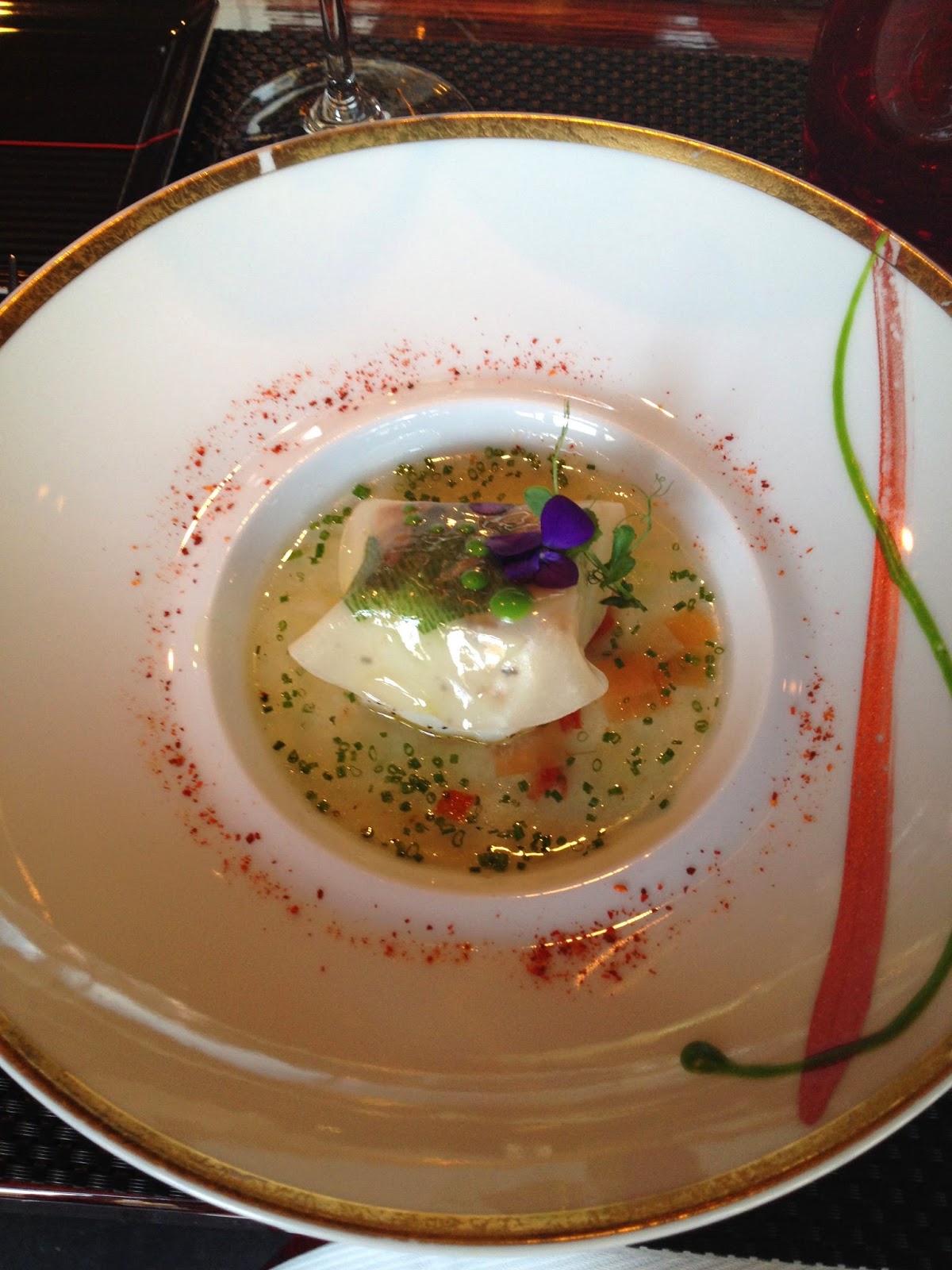 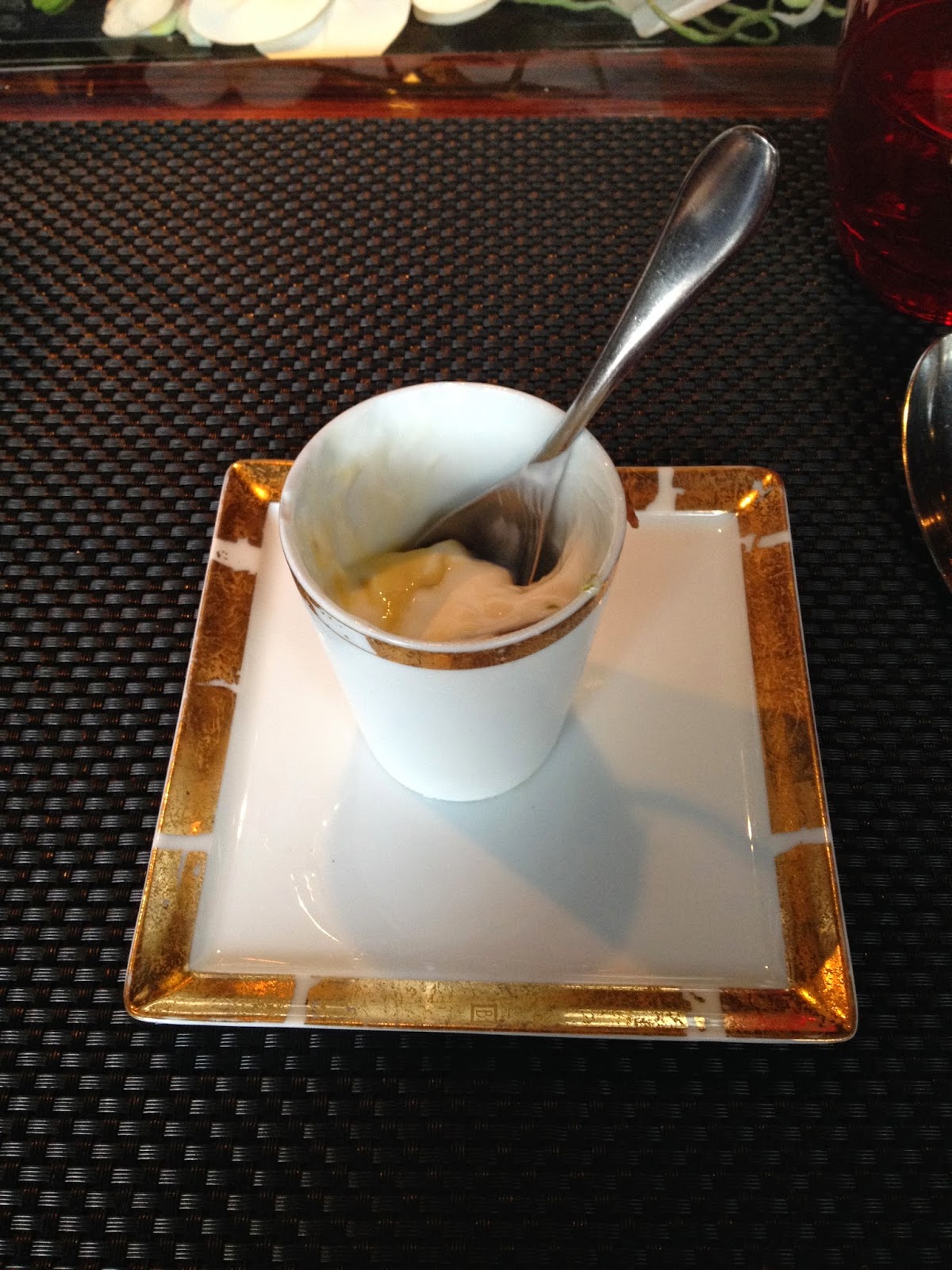 ***Le Chocolate Tentation- Our servers told us that this dessert has remained on the menu for a while now because of how well received it is, and rightly so, as there is really no way you cannot like it.  It is a bowl of super rich chocolate ganache mixed with oreo.  Yes, it was as good as it sounds. 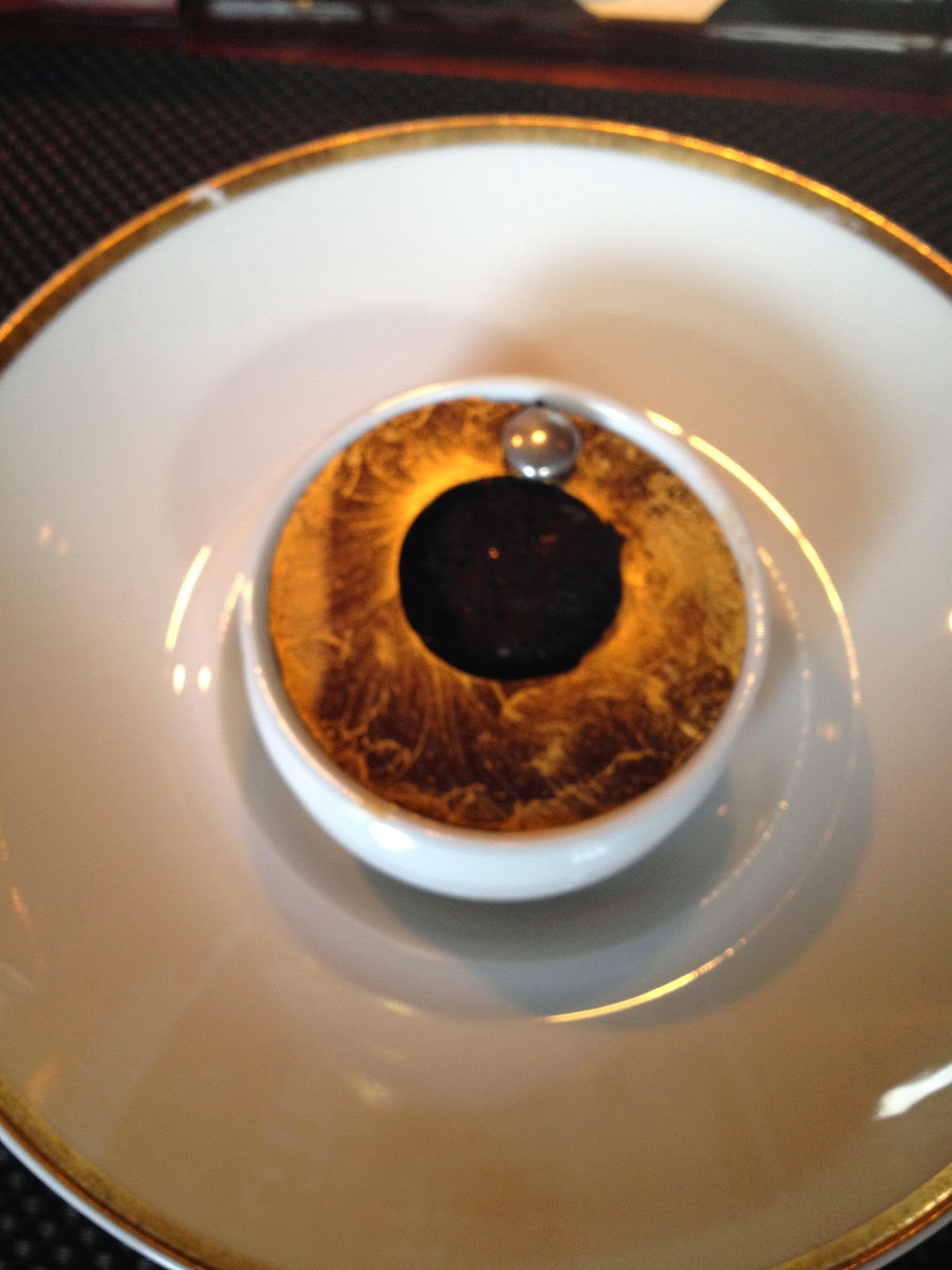 While some may associate Joel Robuchon with old-school, pretentious fine dining, Atelier Joel Robuchon is really everything but that.  The unique experience of sitting around the bar, talking to fellow foodies and eating dish after dish of spectacular food was unparalleled.  What a unforgettable night it was.

Posted by Little Miss Locavore at 23:13