Fusion Tapas at PiDGin- Yet Another Gastown Hotspot

Locavore Approved? YES (website describes their efforts to support local farmers and fisherman, and as a bonus they also support their community through local fundraising initiatives.  Seasonal ingredients including spring vegetables and spot prawns.  Nice selection of local beers)

PidGin has been in the news a lot lately, but not for the reasons they had intended.  It opened in February of this year, and pretty much since the beginning of its short life, it has become the victim of protesters fighting back against the gentrification of the downtown East Side.  Their unfortunate location right across from Pidgeon Park, a favorite hangout of the protesters, makes them a prime target.  While this is no doubt difficult for this new restaurant as they aim to break into the ever-growing Gastown restaurant scene, they are not bowing to the pressure as we found out on our first visit there this past Saturday night.

PidGin is quite unassuming from the outside, and one might walk right past without noticing it if they didn't know better.  Its black exterior with bars on the door may be interpreted as being uninviting, but I think it adds an element of mystery and intrigue that is in keeping with the whole experience. 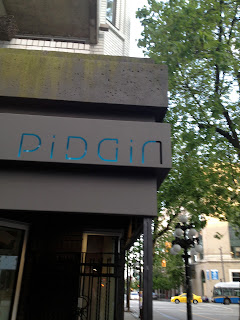 PidGin's exterior is a sharp contast to its interior, which is largely done in white with dark undertones.  The lighting, desinged and crafted locally, is very unique with lamps shooting off in all directions overhead.  There is a mix of seating options including booths (very comfortable), bar seating, and both low and high individuals tables.  Although the design is avant-guard and hip, there is quite a relaxed vibe which lends itself well to tapas style dining.  There is obviously lots of attention payed to small details such as the stylish heavy white clipboards on which the menus were presented, the chopstick holders that doubled as a chopstick stand and the chic black envelope for the bill at the meal's end. 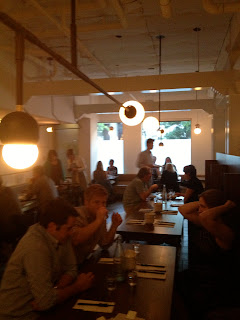 Service was friendly and attentive.  Our server was helpful in explaining all of our dining options (a la carte, prix fix, snacks).  Bottles of water (free of charge) were always replaced just as they ran out.  My only small criticism is that the space is quite loud and we had trouble hearing our servers' descriptions of the dishes which was pretty important considering the many different elements on the plates.

PidGin has a nice beverage list, with a selection of unique cocktails, wine by the bottle and by the glass, beer, sake, sherry and single malts.   We had just gone to The Diamond for drinks beforehand for cocktails so we went with wine and beer.  My hubby was especially happy that they offered an assortment of beers from 49th Parallel Brewing which are made just down the road in East Van.

The food concept at PidGin is a fusion of Japanese, Korean and French.  I found the concept somewhat similar to Bao Bei (read more on this here) but a little lighter on the Asian side.  Although some may argue that the trend of fusion cuisine should be long dead, I think that PidGin pulls it off quite well to create quite a unique dining experience.  With some many new tapas-style restaurants opening in the past few year in the city, I think that PidGin is clever in trying to diversify itself.  The menu is also unique in that it offers a wide variety of dish sizes, from snacks to small plates for one, to small plates for sharing to entree size dishes.  This variety makes it amenable to almost any type of dining experience that one may want.  Snacks and drinks after work, a business meeting, an intimate date, a group of friends- they have it covered.  On the flip side, this may also be a bit confusing, as diners may not know which dishes serve their particular needs on any given night as they are all listed in one large list.  We found the task of sorting this out a bit daunting and therefore we took the lazy way out and ordered the premium prix fixe menu ($55/person) and gave control to the chef to send out whatever he so desired (items change daily).

Oyster shot, apple, horseradish- I am not an oyster fan by any means, but this was about as close as I have come to actually liking one.  Hubby, the oyster expert, really enjoyed it.  The apple grenada was superb and its sweetness was nicely balanced by the zippy horseradish. 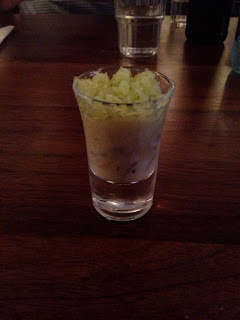 Spot prawn ceviche with grapefruit and cilantro- I was super excited to get a spot prawn dish as these little gems are available for only a few weeks a year so I need to get my fill now!  This ended up being one of my faves.  The spot prawns were undeniably the star of the dish with a light sauce that complemented rather than overshadowed them.  The sourness of the grapefruit gave the otherwise mild dish a nice little kick.  The presentation was beautiful. 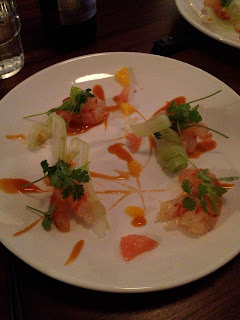 Beef tartare, wasabi tobiko, miso cream cheese, cucumber- Hubby has had his share of beef taratre and he enjoyed this version.  While if was not the best he has ever tasted, he commented on the smooth texture which was contrasted by crispy tobiko and frozen cucumber (this was cool).  Cream cheese was unexpected but surprisingly worked well with the other elements. 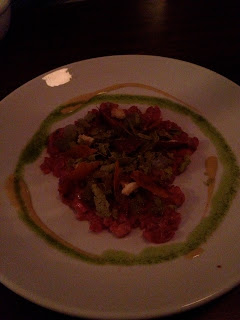 Rice crackers, sweet soy anchovies- A co-worker had recommended this little snack so I was pleased to receive it as part of our tasting menu.  Unfortunately, it ended up being my least favorite dish.  I found it quite clumsy.  Some of the rice crackers were broken into such small pieces that they could not act as vehicles to get the salty little anchovies to one's mouth, so I was puzzled as to how best to tackle it.  Furthermore, I found the anchovies to have an off-putting texture.   Having said this, hubby had a different opinion and really enjoyed the dish, mostly because of its extreme saltiness. 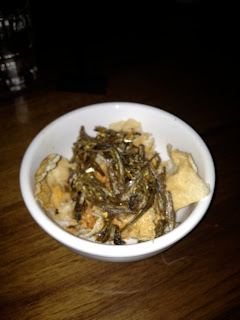 Parisienne gnocchi, radishes, sorrel- This dish, another of my favorites, was served in a very delicate and pretty manner, and then we were told to had to stir before eating to meld all of the flavors and textures.  The gnocchi were some of the softest and lightest I have ever had.  The thinly sliced radishes were not only beautiful but also added a nice crunchy texture.  The sorrel was the main component in the sauce (what a pretty color!), which was light yet surprisingly complex in flavor. 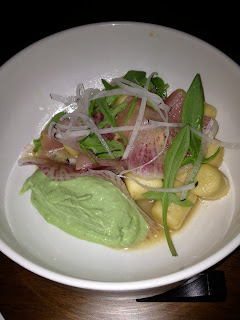 Mushrooms, sugar snap peas, egg, soy yuzu brown butter-This was the table favorite, ever for the meat eaters!  The egg was wonderfully salty and it paired perfectly with the meaty mushrooms.  The snap peas were super fresh tasting.  Simple in concept, but again a very complex dish that came together just right.

"Dan dan" kohlrabi noodle salad, tofu, almonds- This was a light dish, with "noodles" made of kohlrabi, which was well placed before the next two entree-sized dish that was next to come. The sauce was a nice mix of salty and sweet. 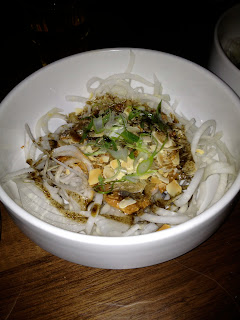 Scallops, fried polenta, brussel sprouts, XO, caper raisin- Although this dish had some high points, the scallops sadly overcooked (a major no-no in my books).  They did, however, have a nice sear.  The fried polenta was crispy on the outside and fluffy on the inside but was a bit dry (could have used a  sauce).  I did quite enjoy brussel sprouts (both leaves and stems) which were brilliantly green and fried to perfection.  All elements were good but there was no real wow factor and the components were not tied together. 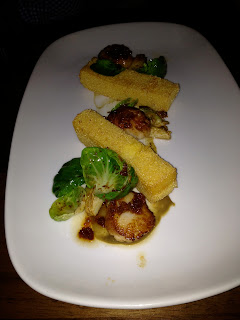 Half duck, carrot cake, oranges, spices- This was another table favorite.  There were two different preparations of duck on the plate (confit under sliced duck) and both were succulent.  The portion was very generous.  The carrots which were cooked in duck fat were amazingly tender and flavorful.  The  carrot cake crumble and puree was unique and delicious (tasted just like carrot cake!).  The hint of orange added a welcome lightness to an otherwise heavy dish.  This was a home run. 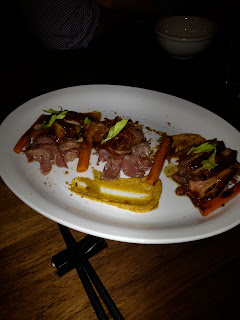 Meringue, yuzu curd, vanilla, celery- This was, in my opinion, the perfect dessert- light, refreshing, and a great palate cleanser.  The yuzu curd tasted like a more pungeant lemon curd and the vanilla bean creme was amazing (could have eaten a bowl of this!).  The celery was a bit of a throw-away as there was not really enough of it on the plate to have any substantial impact.  Celery excluded, this was really special!

A caution to those who are watching their pennies- PidGin is not a place to go on a budget!  Our meal came to almost $200 when it was all said and done.  Perhaps a bit excessive for the amount of food that you get.


PidGin obviously strives to push the boundaries with unique, unexpected combinations of ingredients prepared using a variety of cooking techniques.  While such complexity has the potential to result in confused and disjointed dishes, I thought that, for the most part, PidGin succeeded in making balanced dishes in which the natural flavors of the ingredients still shone through.  In addition, the atmosphere and the menu is well suited to a variety of different dining experiences, from date to work meeting to a group of friends out for drinks.

Glad to welcome PidGin as another great addition to ever-growing fleet of Gastown foodie destinations!

Posted by Little Miss Locavore at 23:43