This blog post is a long time coming, and in fact, I have been back to Noma a second time since I first  visited Noma and drafted this review last August (2016).  I can now share my experience at Noma Copenhagen back then, followed by a look at Noma Mexico where I recently dined just last month (April 2017).   I hope that by posting the two in sequence, you will gain an appreciation for how truly skilled Redzepi and his team are in working with any ingredient, whether it be a familiar vegetable in Copenhagen, or an exotic plant in Tulum.  Heck, they can even make insects approachable and delicious!  What I have come to learn is that for them, it is not about transforming ingredients, but instead it is about elevating ingredients and showcasing them to the best of their potential.  The flavours they create are novel thought-provoking, moreso than any other place that I have been, and it is this that will keep me following Redzepi wherever he decides to go next!

This two-part blog will first review our first meal at Noma Copenhagen.  Read on to the next post to take a look at Noma Mexico (click here to go there directly).

Reservations required?  YOU MISSED YOUR CHANCE:( - Unfortunately, Noma is temporarily closed, and will never again be in its original form.  Redzepi and his team are opening in a new location (you can find out more, as well as watch a short visit about Noma past and present here) with no set opening date.
Noma has always been one of the toughest reservations in the world to get (Hubby and I tried 3 times and failed to get Noma Copenhagen, and enlisted the help of multiple family members to get Noma Mexico).  I am sure that when the new Noma opens it will be at least as difficult, if not harder, to snag a reso!
***Note- Redzepi has recently opened a new, more casual restaurant called 108, located fairly close to the old Noma if you are dying to get a taste.

Atmosphere: Noma is located just outside downtown Copenhagen in an old historic brick building.  There has just been a new bridge built that drops you almost at its doorstep but even so, you may walk right by if you are not purposefully looking for the “Noma” sign.  A little rock garden has been built by the side underneath the windows to give guests some privacy from curious onlookers.
When you enter the front door, the first thing that will greet you is its busy kitchen, bustling with its 24 paid staff and perhaps a few of its 24 interns.  It is clearly the focal point of the room.  The décor is quite rustic with exposed wooden beams, wooden tables and some garlic bulbs decorating the walls.  It is exactly what I would of expected from one of the world’s greatest locavores.  Plating is also extremely rustic, with many of the dishes being plated with moss and rocks to simulate nature.
At the end of the meal, we had the privilege of being taken for a tour of the restaurant which, for a foodie like me, was an absolute dream come true.  There we saw the kitchen itself (and got a group photo with the staff!), the barbecue hut out back, the fermentation huts (so cool!) and the test kitchen, complete with tanks housing the crabs and lobster we ate that night and an indoor herb garden.  The tour highlights the incredible amount of work, innovation and talent that goes into preparing the meal at Noma.  It is truly unparalleled.

Service:  You will meet many servers during the Noma experience, and will also have some dishes delivered directly by kitchen staff.  Every server is very knowledgeable about every single ingredient and has a load of passion to back it up.  One thing that really struck me was the obvious comradery and team-mindedness between staff at Noma, something that I have never noticed at other such restaurants.  There were team chants coming from the kitchen, servers helping each other out and even joking amongst themselves.  This made the overall atmosphere that much more uplifting and pleasant.   There were also special touches throughout the service, such as the tour (see above), a map we were given with suggested restaurants and bars around Copenhagen for visitors and menus to take home.

Food/drink: The food at Noma is like nothing I have ever had before.  Noma is not doing variations on great food like many other Michelin restaurants, but instead are doing its very own thing.  I have rarely felt so excited, inquisitive or challenged by food.   Redzepi, along with Canadian-born head chef Ben Ing, are not in the business of “wowing” with big bursts of flavors but instead creates very subtle pulses of unami that develop as you eat the dish.  I tasted things at Noma that I had never before tasted anywhere else, and may never taste again.  The Noma team is constantly experimenting with dishes, testing out new combinations for fermentation and pushing the boundaries of creativity.  This is all while using only the finest and freshest locally sourced ingredients, like the sweetest local crab at our dinner that was killed moments before being prepared and eaten and the herbs picked moments before being put on our plate.  Noma’s food is about as avant-guard as it comes without being too flashy or complicated.  Despite the elaborate behind-the-scenes work, every dish maintains a degree of humility and modesty and, most importantly, put the ingredients at the forefront. 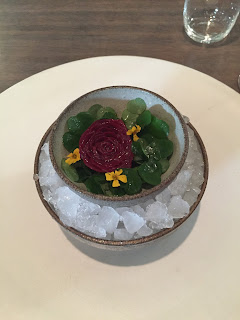 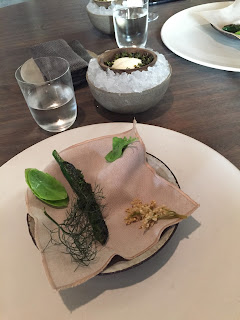 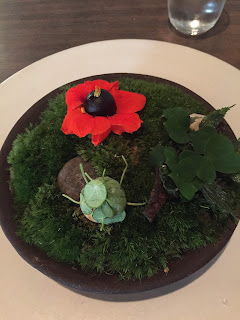 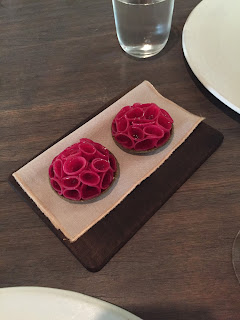 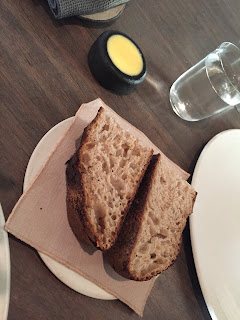 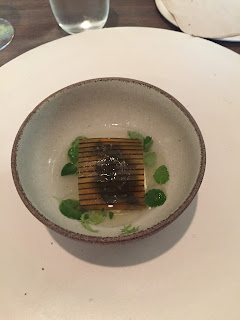 A light stew of fruit and vegetables 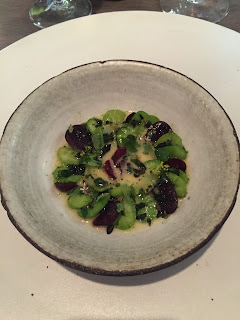 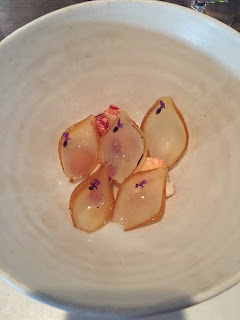 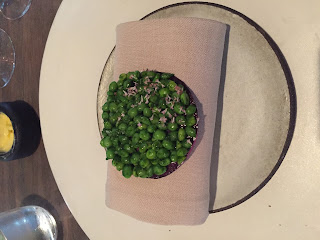 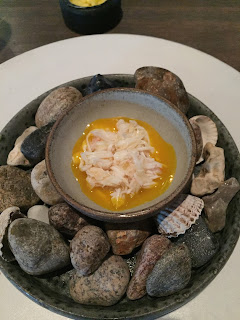 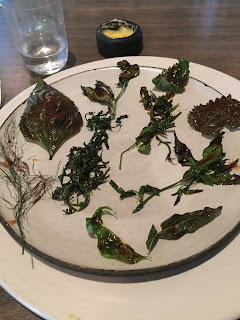 Turbot grilled on the bone with sweet shrimp 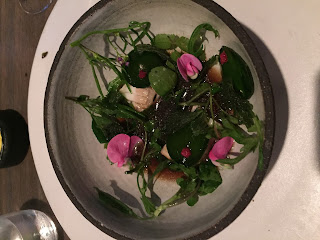 A dessert of sheep's milk and ant paste 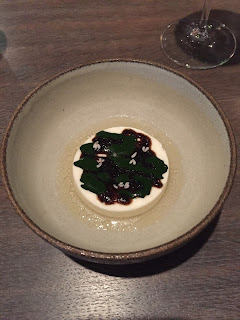 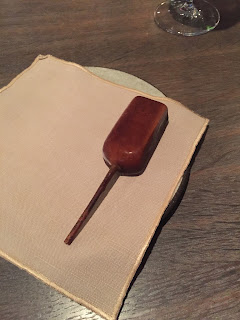 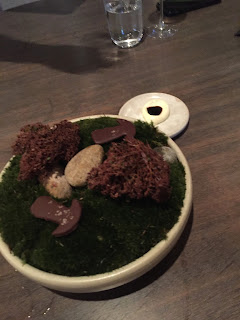 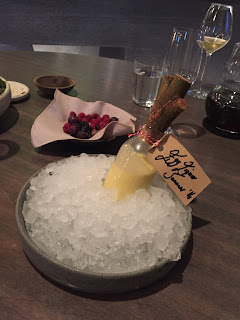 Overall Impression?
I had been waiting to dine at Noma for years and it now seems surreal that I was finally able to experience it.  To tell the honest truth, Noma was not what I expected.  I simply could not have conceptualized such food before actually getting the chance to taste it for myself.  It opened my eyes to a whole new world of cooking that Redzepi and his team have created and continue to evolve.  I have never been so curious to discover where a chef and his team team will go next and I cannot wait to follow along.  Noma truly is the experience of a lifetime.

Posted by Little Miss Locavore at 22:42