Locavore Approved?- YES- Although Blacktail Florist does not have "locavore" written all over the menu like many new restaurants these days, the food here is unmistakably seasonal.  Our dishes all showcased the best of what early spring has to offer, prepared in very innovative ways.  I felt that I was being treated to a very representative sampling of what I had seen at the farmer's market earlier that day!

After a long hiatus from Vancouver's food scene due, it feels great to be back:)

For my first night back, I wanted to choose a new kid on the block and, after some deliberation, I settled on Gastown's new Blacktail Florist.

It has been opened now for just over a month and online reviews have been mixed.  This made me a little nervous but, after looking at the menu of small plates, I felt that I needed to try it for myself.

Blacktail Florist, located right at the mouth of Gastown, has a rather puzzling entrance.  Although it has a window facing Water St., it must be accessed through the alley at the back which took Hubby and I  awhile to figure out (a sign on Water St. would have been helpful!).  When we finally did reach its doors, we were greeted by a warm hello and, although we did not have reservations, we were immediately seated at a nice table by the windows.

I found the room bright and inviting.  The light wood gives it quite a rustic feel, and it has interesting windows, lighting and accents throughout.  It has a "wilderness" feel that is quite unique and it suits its name well considering the fact that a "blacktail" is actually a species of indigenous west coast deer (who knew?). 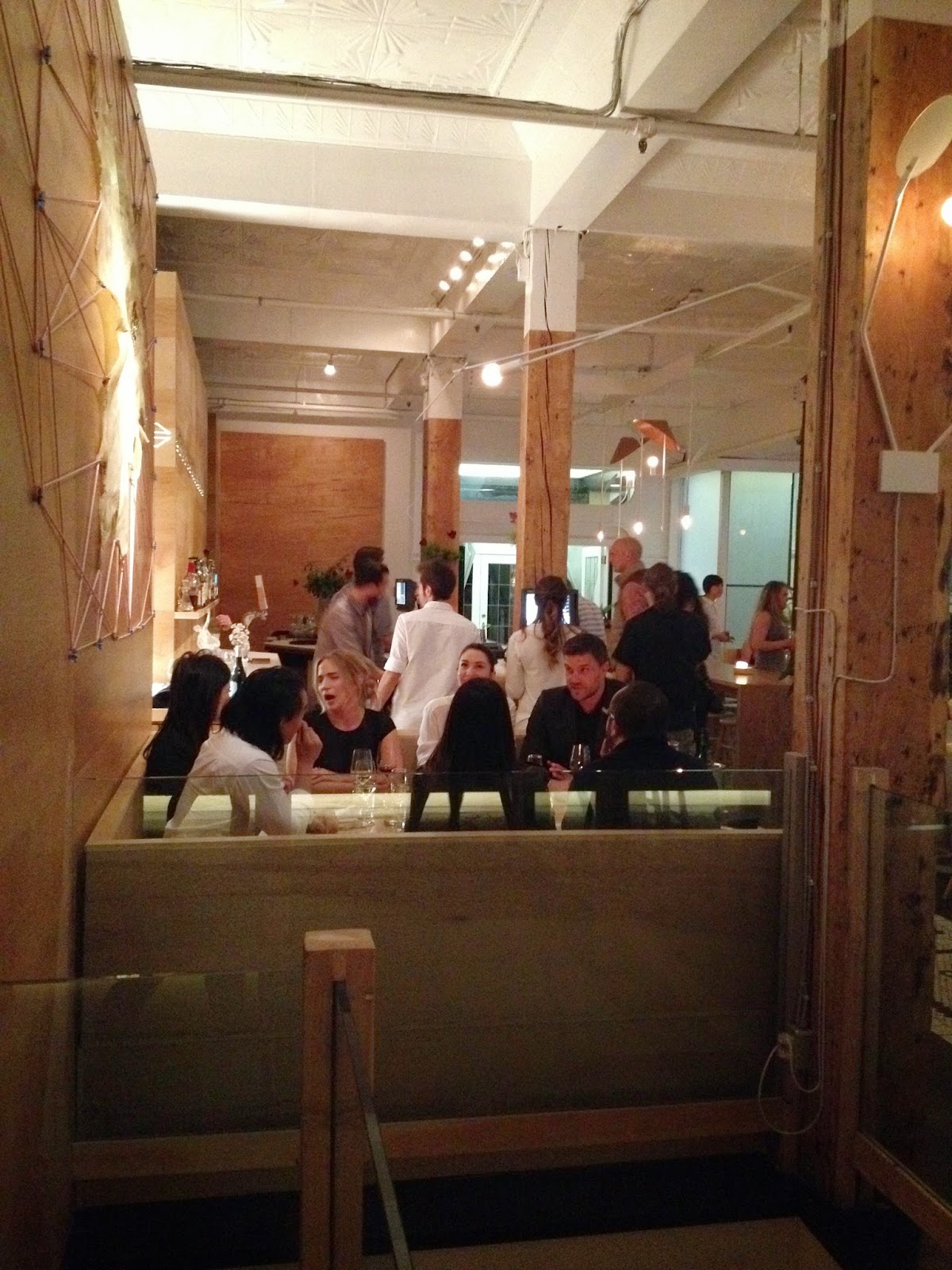 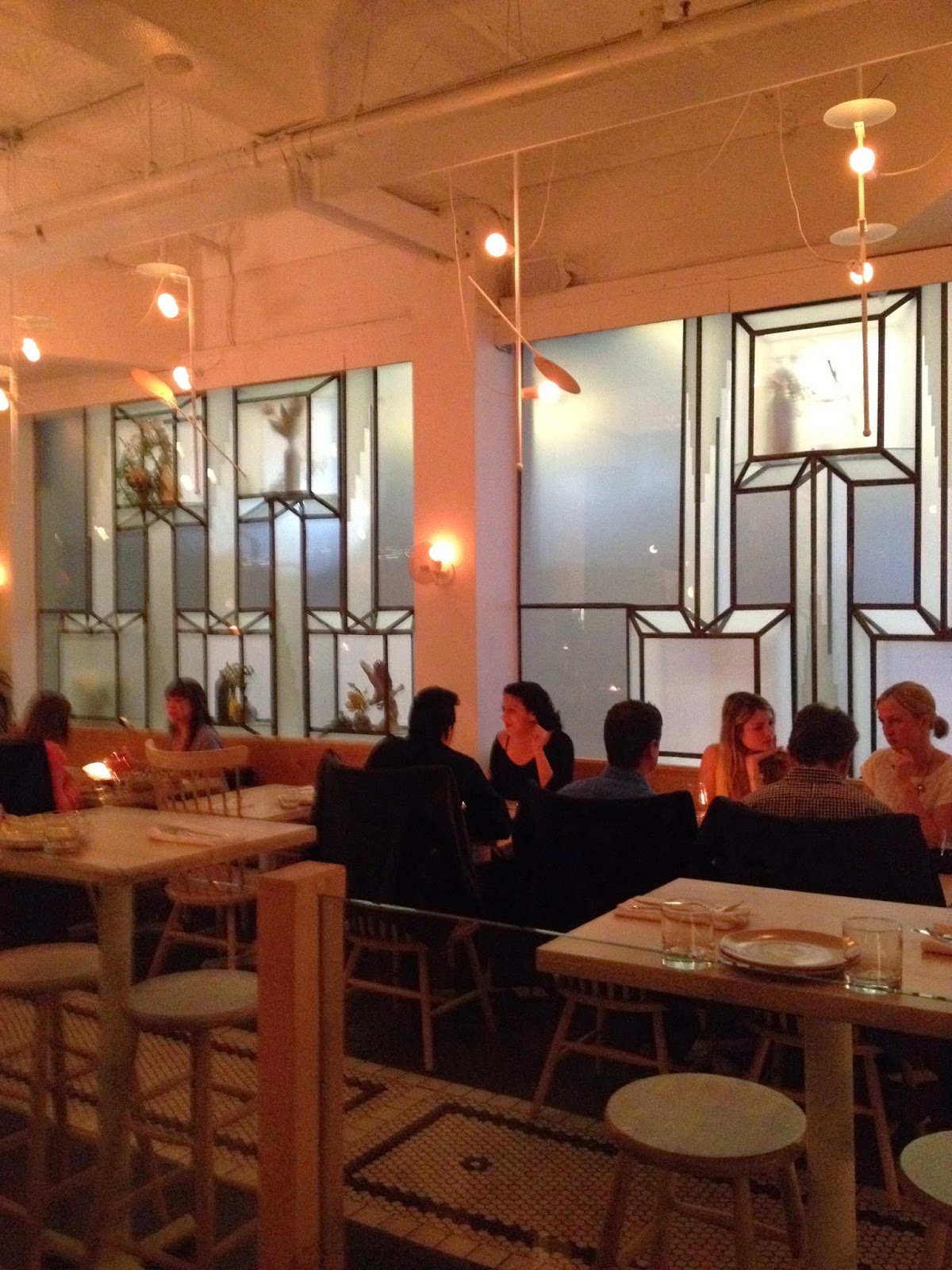 For such a new restaurant, the service at Blacktail Florist was first class.  Much of this was thanks to our very friendly and knowledgeable server who was so genuine that you felt like her friend by the time you left.  She was very enthusiastic about the food and was able to make some great recommendations. After we ordered, service went like clockwork with new small plates arriving within 10 minutes of each  other and our water glasses being constantly replenished.  Every dish was described to us clearly and confidently.  I was super impressed!

The menu at Blacktail Florist is divided into a number of categories of small plates divided into "bites", "meat", "fish", "vegetable" and "sweet".  The "bites" section is comprised of everything from a mouthful (usually served in twos so that each guest can enjoy one), to the plate of fried chicken that we ordered.  You can likely guess from the price how much food you will be getting  (anywhere from $2-12).  The other sections include small plates that we split between the two of us.  Like most places that offer small plates, you will not likely be stuffed when you leave, but I do not think this is necessarily a bad thing, especially because you get to sample so many different flavours.

I begin the night with a cocktail as I had read very positive reviews of their alcoholic concoctions.  Of the 5 cocktails offered, I chose the Sing the Blues which I gather is fairly new considering that it has not yet made it on the online menu.  I found this gin-based cocktail to be very refreshing, with a "just sweet enough" blueberry syrup balanced out by the acidity of the blueberry shrub.  Hubby ordered off the wine list which was made up of exclusively BC wines (love that!). 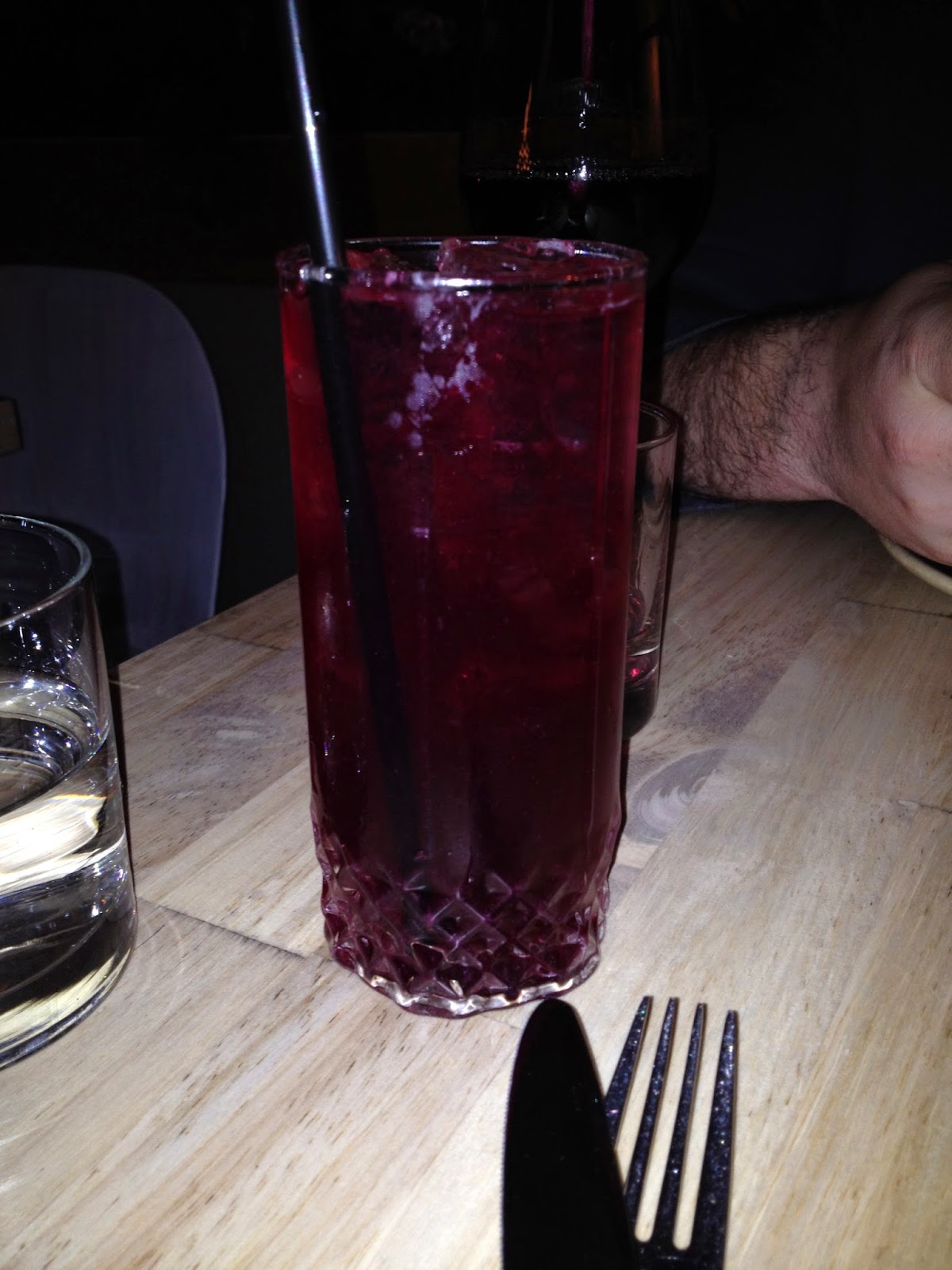 Salmon belly with endive, crispy shallots, dill and rock pops- There were Hubby's personal favourite of the night and were so good we had to have a second order!  The generous mound of salmon sitting on the endive was luscious and the pop rocks gave a delayed "explosion" in your mouth that made this dish super fun! 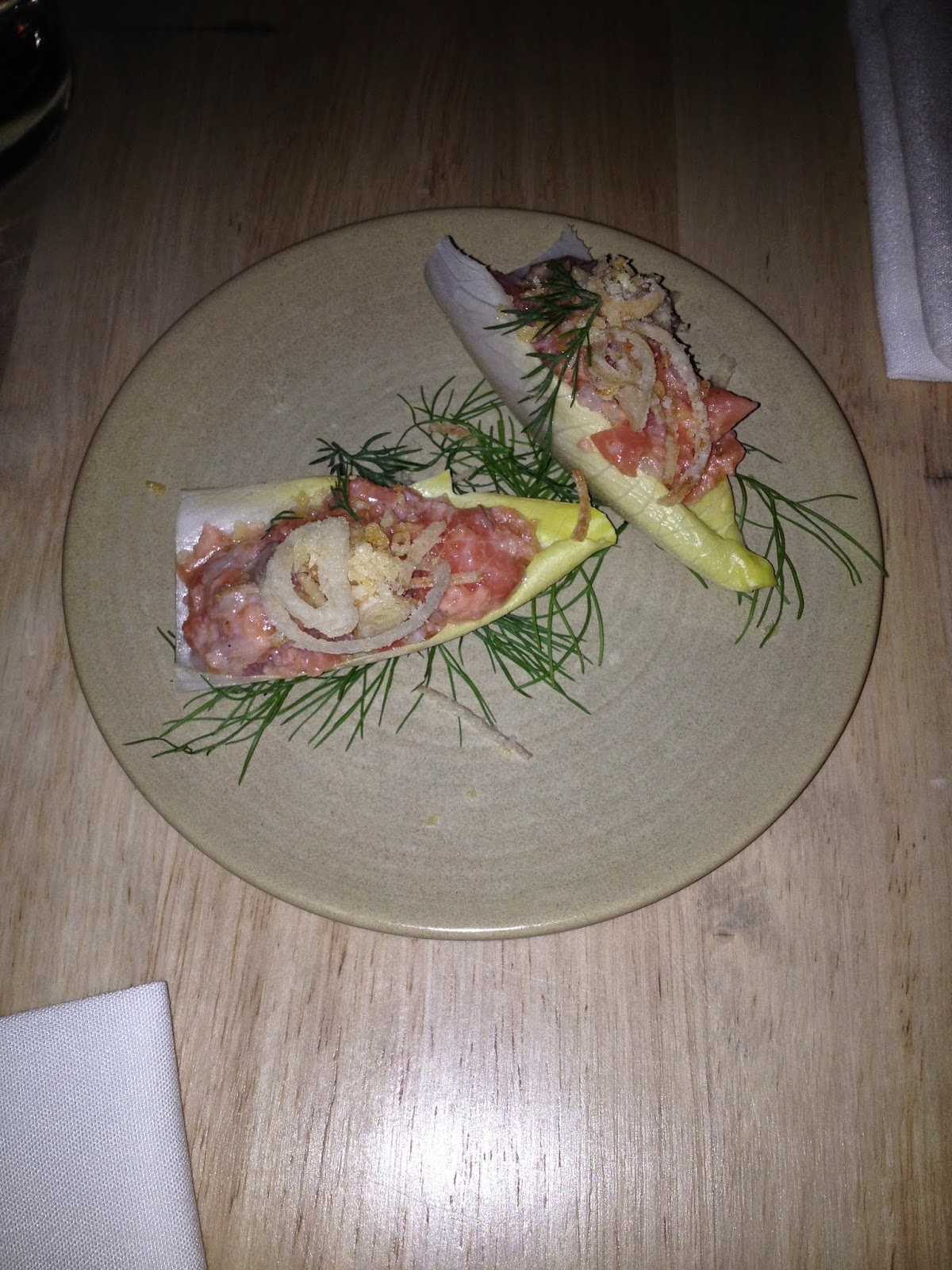 Fried chicken with garden beignets and beet ketchup- Hubby and I had mixed reviews on this one.  The chicken was juicy and tender inside and crispy outside (check!).  I liked the "beetiness" of the ketchup but Hubby was more skeptical and did not think it worked with the chicken.  We were both confused about the "beignets" and felt that baby potatoes would have worked much better. 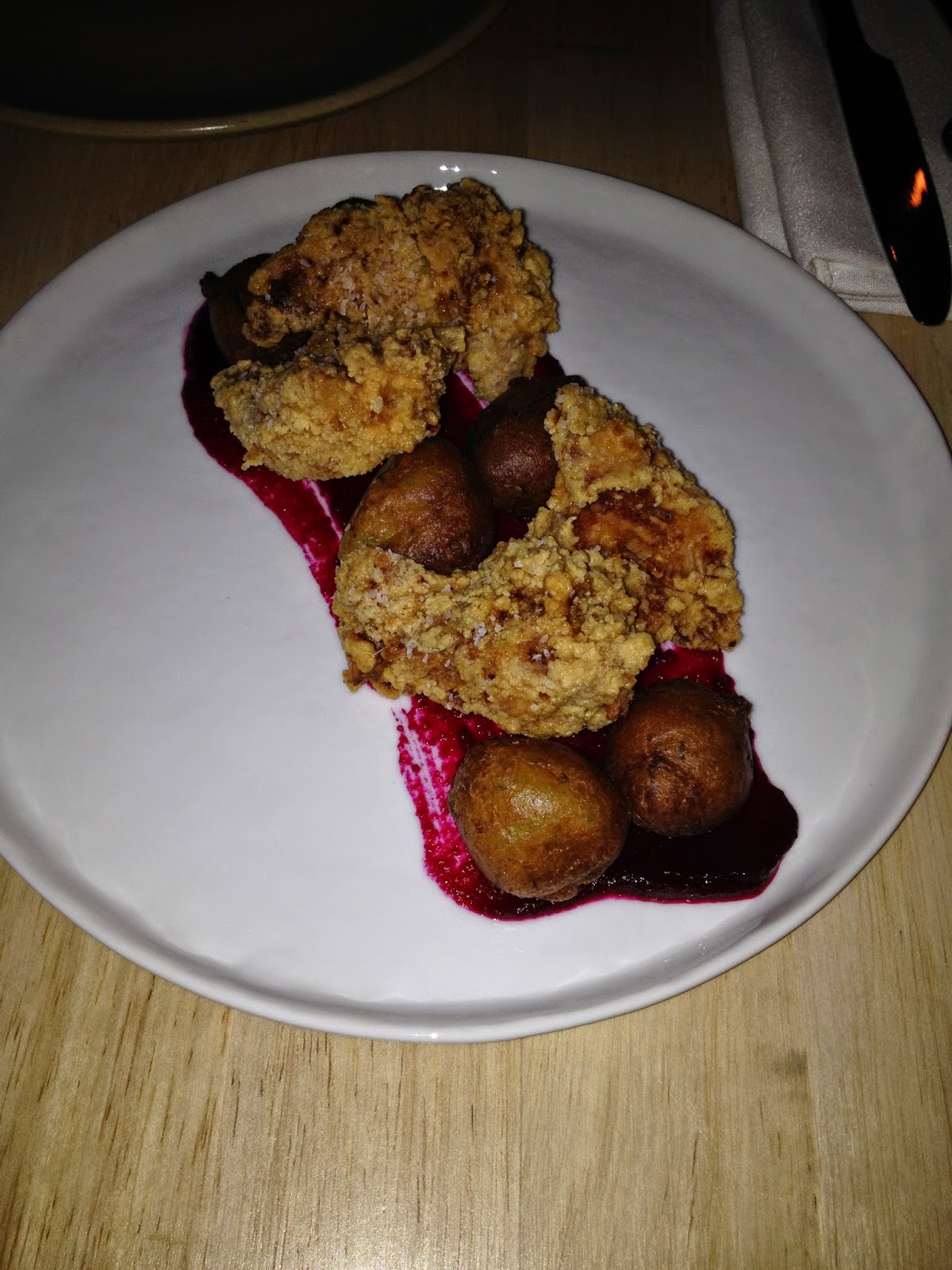 Asparagus, foraged mushrooms, smoked cream, mustard- This was my personal favourite!  This dish proves that vegetables certainly do not have to be boring!  Between the crisp julienne asparagus, the meaty mushrooms and the creamy sauce with whole mustard seeds, this dish was a party in my mouth! 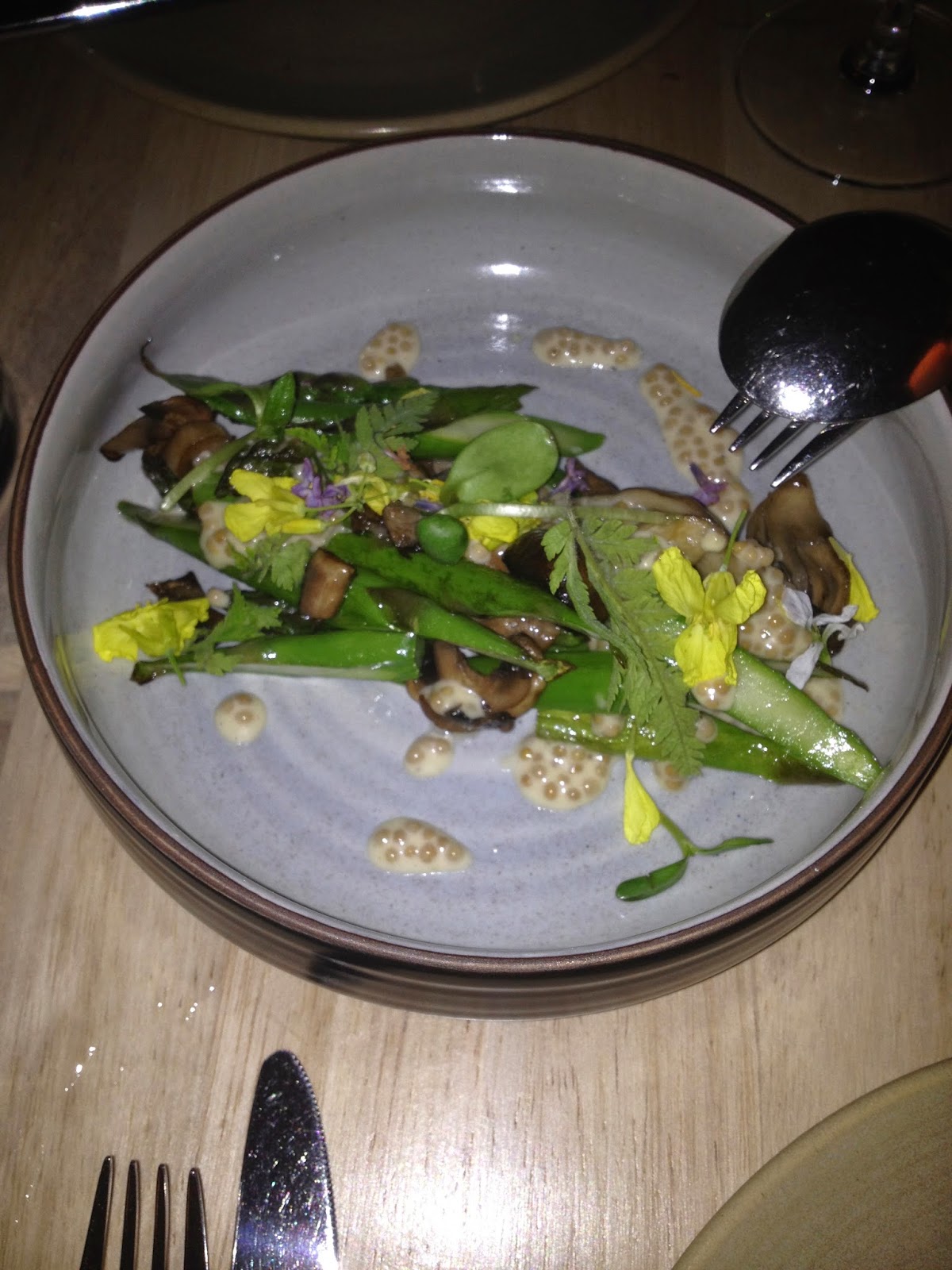 Smoked salmon with turnips, leeks and celery puree- After the amazing salmon "bite" that we started with, I was very excited for this dish and fortunately, I was not disappointed.  The salmon was moist and subtly smoked to perfection, and I really enjoyed the accompanying seasonal veg.  My only criticism was the celery puree which was rather off-putting, both in texture and flavour. 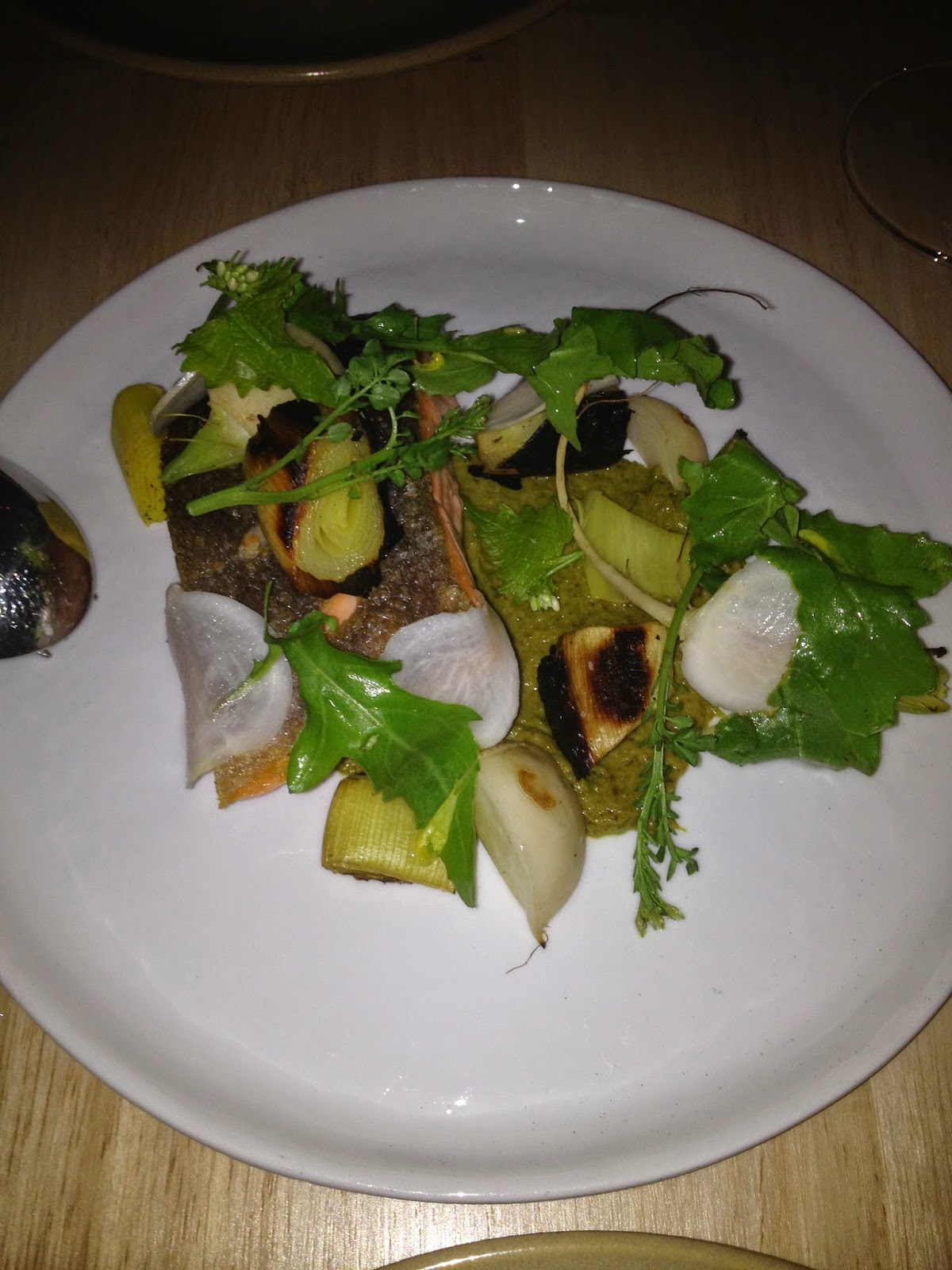 Braised beef with celery puree- After the misstep with the celery on the last dish, I was a bit leery when another celery puree was put in front of us.  Fortunately, they got it right on this time as the puree was creamy and delicious with just a hint of celery.  The meat was a bit on the fatty side for hubby's liking but it was tender and had nice flavour.  The full piece of celery at the side of the plate was a bit awkward for a sharing plate as it was hard to cut, but in the end had quite a pleasing taste and texture. 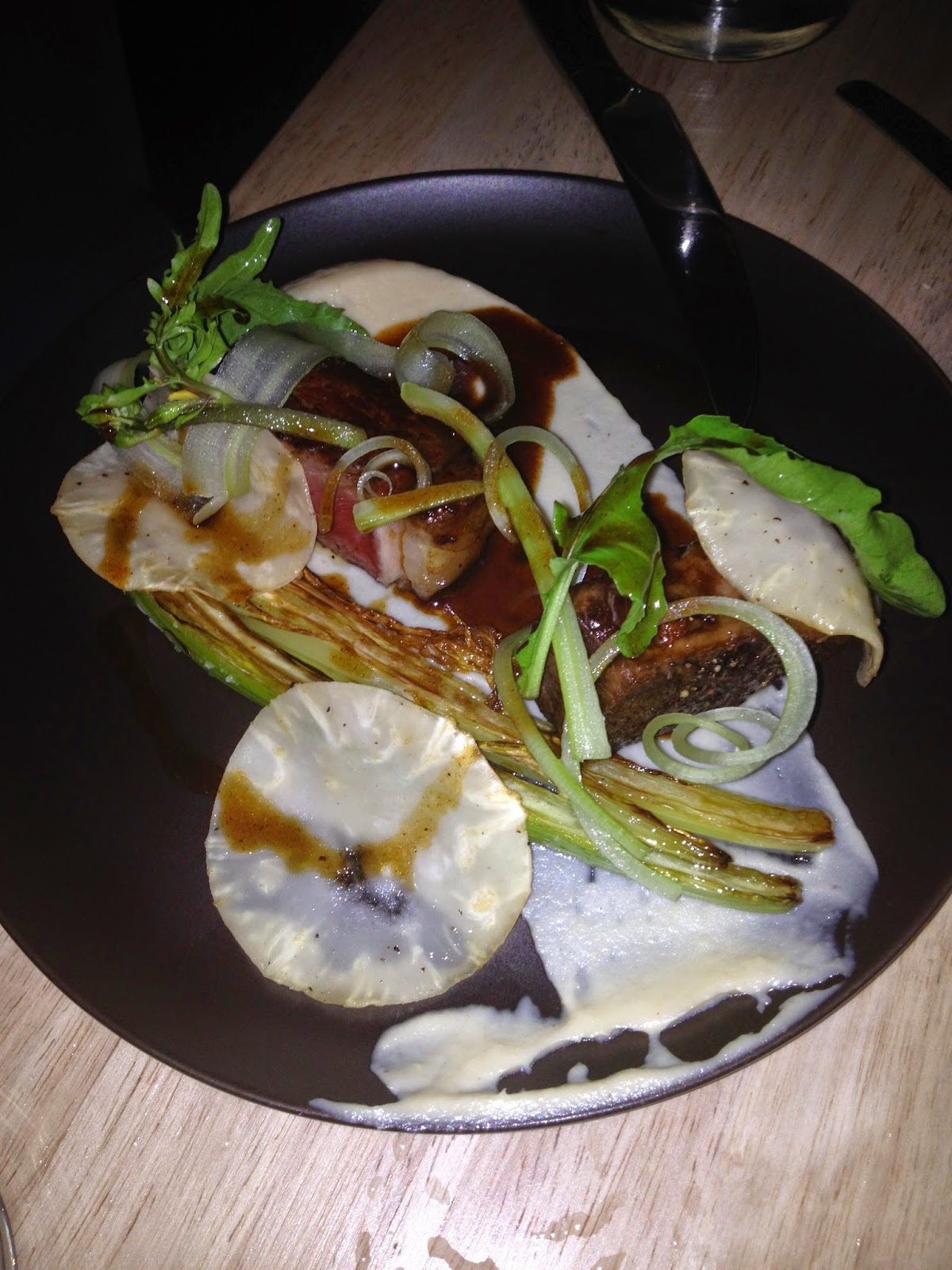 All in all, we were very pleased with our meal at Blacktail Florist.  For such a young restaurant, the service was exceptional and, although there were a few misses on certain dishes, the meal as a whole was quite delicious.  I also applaud them for their ever-evolving menu and their use of seasonal produce.

Some may ask- did Vancouver really need another small-plates restaurant?  If it is as good as Blacktail Florist, then I would argue that we definitely did!

Posted by Little Miss Locavore at 15:42