Locavore approved? YES- I loved the daily menu featuring the most seasonal of ingredients.  They even credit the farms that supply the tasty produce/meat in the dish title and description.  From reading about Four Sparrows online, it would appear that they have been on the locavore bandwagon for years, long before it was the "in" thing to do.  Kudos to them for being trailblazers in the locavore movement!

Bainbridge Island has been on my radar of places to go for a while now.  It is a little island off the coast of Seattle.  It is a great day trip for those living in Seattle (just a short 35 min ferry run) and also a pretty convenient weekend getaway for us Vancouverites.

Although there are many reasons to visit Bainbridge Island, its food scene is what brought it to my attention.  Unlike the Gulf Islands, which I love for their hippie charm, Bainbridge is a much more affluent town that has a surprising number of restaurants.  It was quite a difficult feat to choose just two, one for each of our nights on the island.  After much deliberation, I finally decided on Four Sparrows and Hitchcock (stay tuned for that review next!).

Four Sparrows is somewhat of an establishment on Bainbridge Island.  They serve Northern Italian cuisine in an old farmhouse with the tables spread into its many rooms, that is admittedly more dated and "old-school" than we are used to .  Although it has appears rather formal on the outside, you will find a very casual and approachable feel on the inside.  Although we initially feared that we were underdressed, there is quite an acceptable range of attire here, from shorts to jeans to suit and tie.  You are immediately made to feel welcome.

When we first arrived, there seemed to be some confusion with our table but this was quickly remedied and we were offered a choice of 3 different tables.  We were then greeted by our server for the evening, who was nothing short of amazing.  He was extremely personal and, although it was our first time there, he made us feel like regulars.  It is rare to be treated such gracious and warm service.

We began the night with cocktails from their ever-evolving cocktail menu with clever drink names.  We did note quite a nice bar at the back of the restaurant on our way in.  Hubby chose the "Catch Her In the Rye", a rye-based cocktail that he enjoyed quite a bit.  I had a gin-based cocktail with grapefruit and elderflower (can't remember the name!) that was light and had a nice balance of sweet and sour.  We just wished that we could have enjoyed them for a bit longer before our appies and bread all arrived just a moment after being served the cocktails. 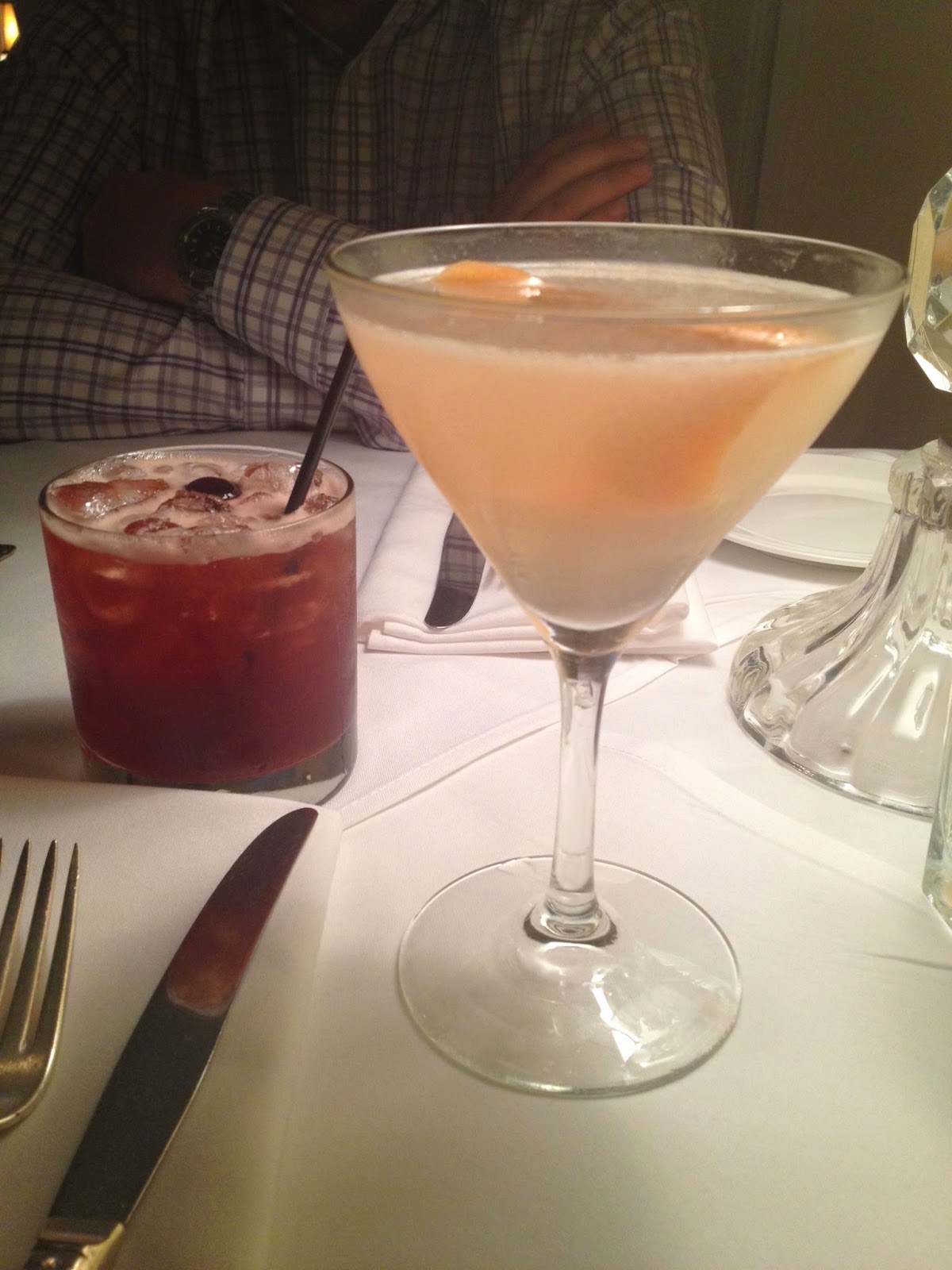 Then it was onto the meal itself which, for this particular review, will be the most difficult.  I would love to sing its praises for my selections which were outstandingly good (some of the best I have had yet this year).  Unfortunately, Hubby's choices of appie and main were subpar at best and therefore, I cannot be as positive as I would have liked.  Here are our dishes for the evening:

Bread (complimentary)- This garlic focaccia was served in puffy triangles of goodness.  Hubby certainly approved, he ate the whole plate! 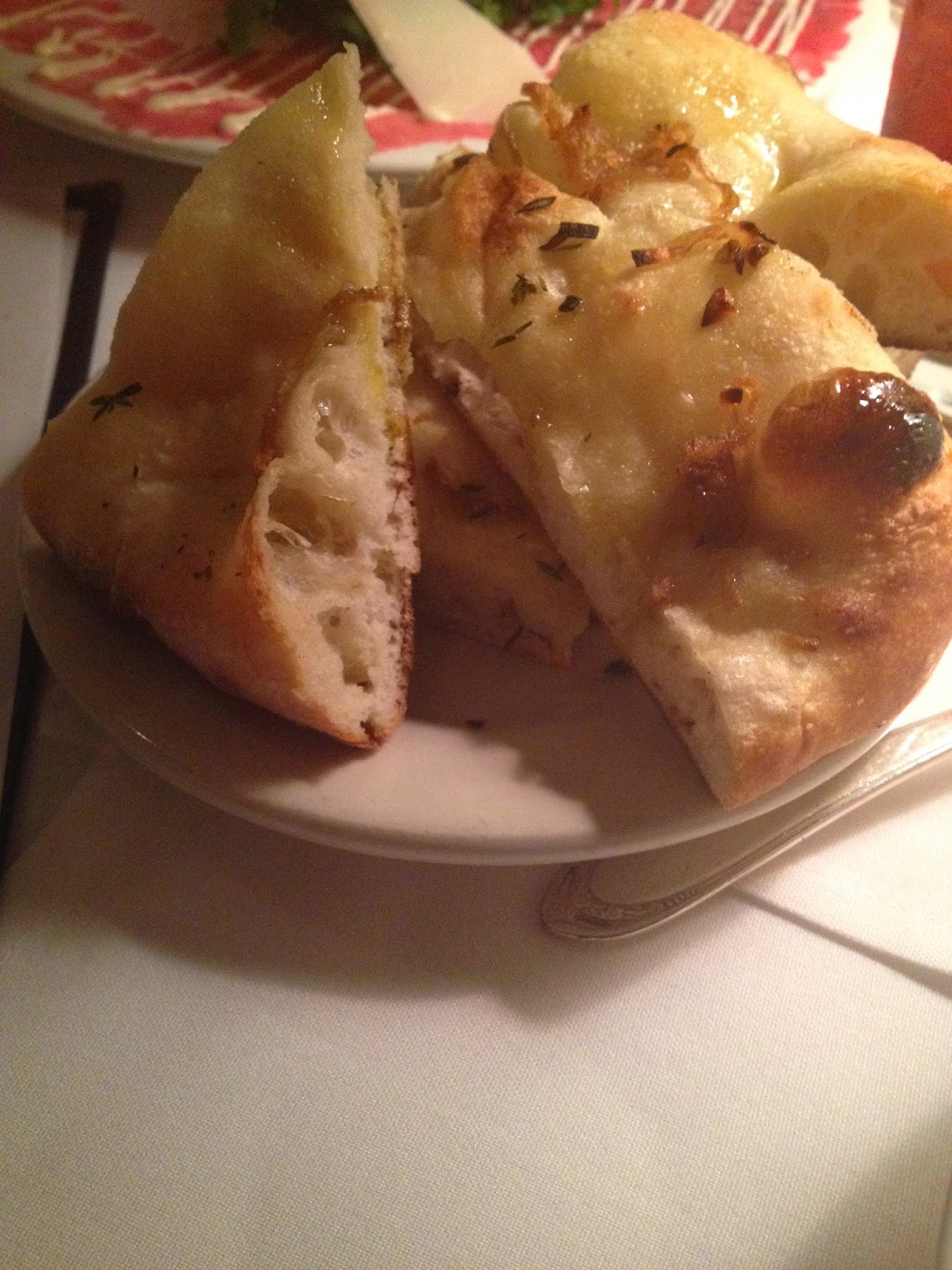 Fricasse of Local Morels- It frightens me to think that I almost did not order this heavenly appetizer.  The morals are prepared in a chicken broth (I do not eat meat/chicken) and they were not willing to prepare it without the chicken broth as they feared that the flavours would just not measure up.  And they were absolutely correct not to mess with this perfect dish.  The creamy polenta, the meaty mushrooms, the light broth- heavenly.  While it is a rather heavy appetizer (you may want to go a bit lighter on the main), this is an absolute must if you are lucky enough to have it re-apear on the menu.  Best appetizer of the year, hands-down. 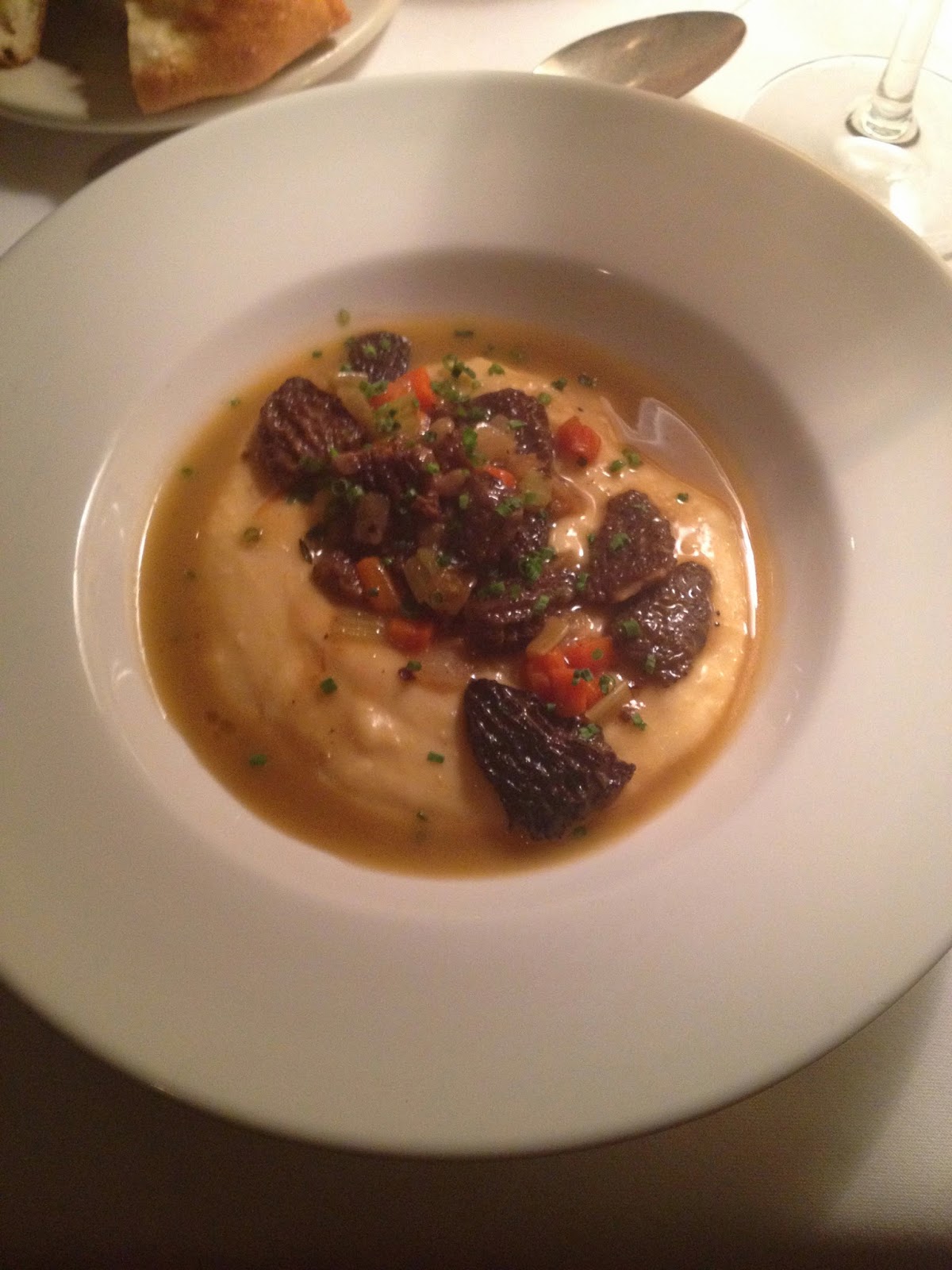 Painted Hills Beef Carpaccio- I had read good reviews of this appetizer online and therefore I recommended it to Hubby who is quite a fan of carpaccio.  The plate certainly looked promising when it arrived, with a very generous portion of meat topped with arugula and shaved parmigiano.  Unfortunately, when Hubby dug in, he discovered that the meat was frozen (yes, frozen solid).  I am not exactly sure how this happened, but it made the texture off-putting to say the least. 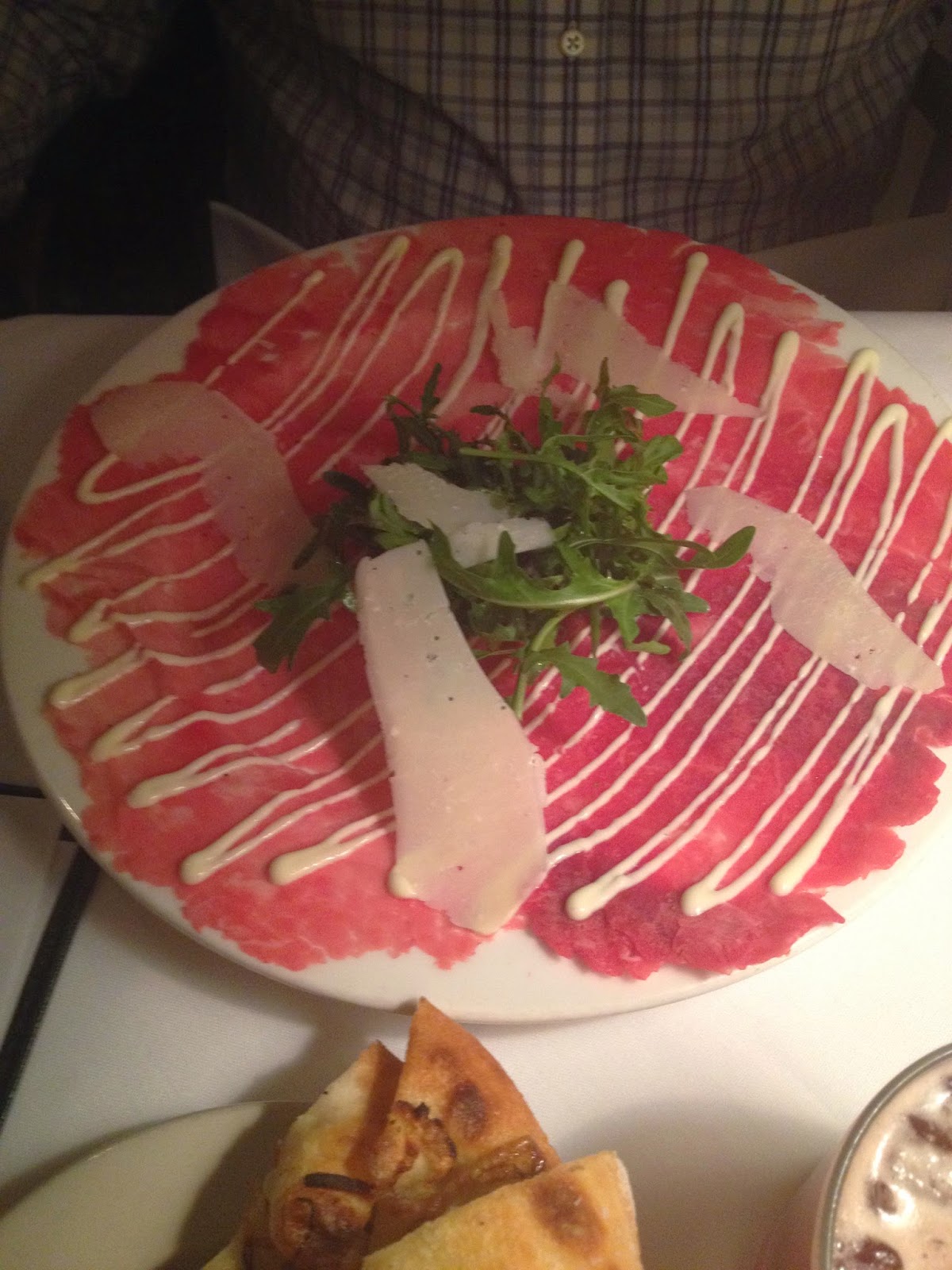 Neah Bay King Salmon- On first look at the menu, my eyes were drawn to the handmade cavatelli with morels and peas but unfortunately, they had sold out:(  So my next choice was the salmon, served with lentils, spinach and sorrel.  After taking the first bite, I was thanking my lucky stars that the cavetelli was not available as the salmon absolutely blew me away.  The generous portion was cooked to perfection and seasoned just right.  There was no sauce or other bells and whistles, just deliciously plain, local salmon.  The sauteed spinach on top was also quite simple so as not to detract from the fish, and the lentils with a hint of creme fraiche complemented the salmon nicely.  Simple perfection. 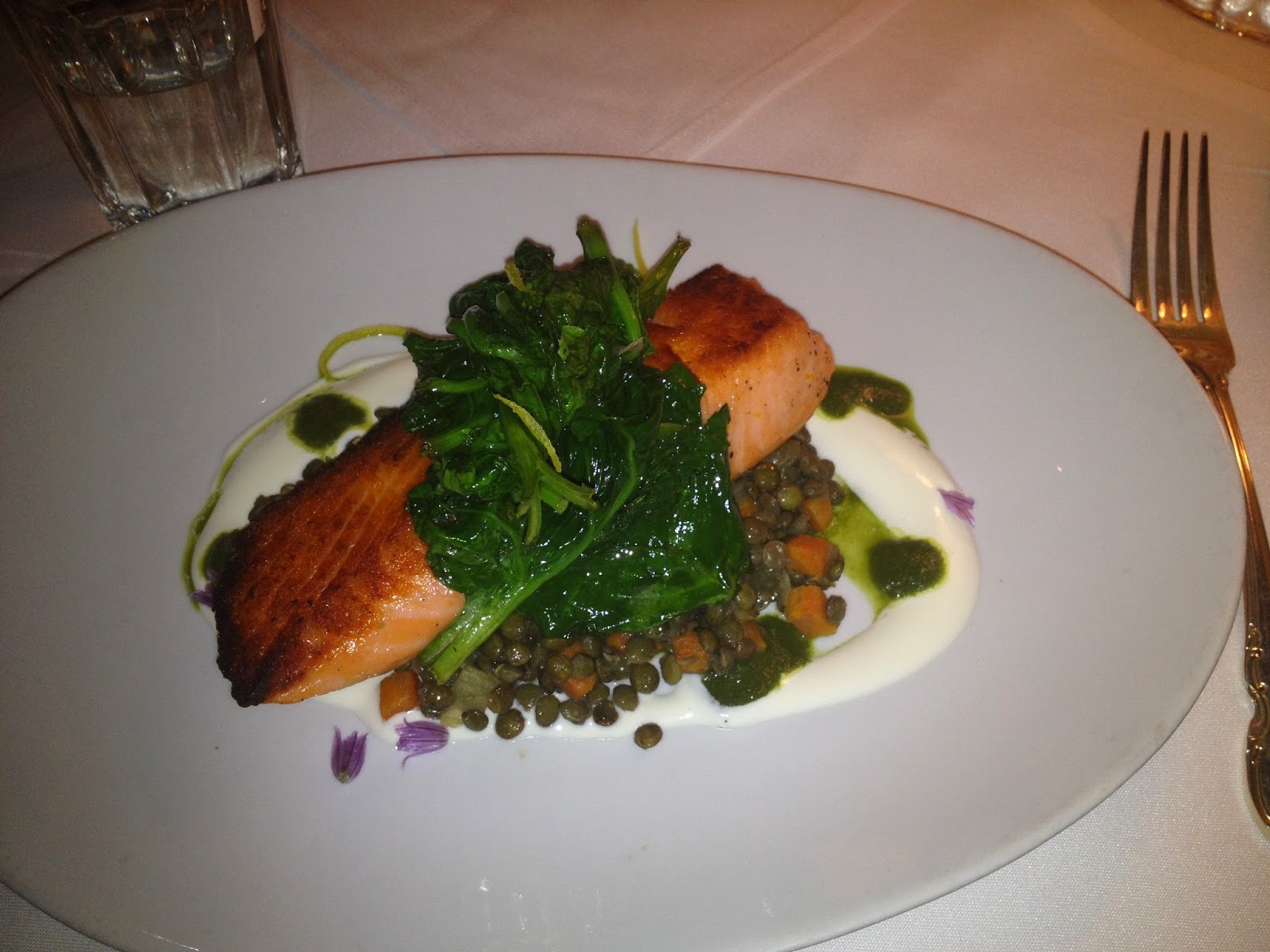 Capricciosa Pizza- Our wonderful server told us that the word "capricciosa" means "fickle" and that, in Italy, this pizza is topped with whatever ingredients one has on hand.  On this particular evening, morels and asparagus were the in-season specialties and therefore, these acted as the stars of the pizza in addition to prosciutto and mozzarella.  Lastly, it was all topped off with a hen's egg.  Hubby thought this sounded very intriguing but unfortunately, the end product did not quite meet up to his expectations.  The crust was nothing special (disappointing after the delicious bread beforehand) and the pizza was quite dry and under-seasoned.  He did enjoy the prosciutto but was wished there was more of it.  After eating half, he threw in the towel and decided to save room for dessert instead. 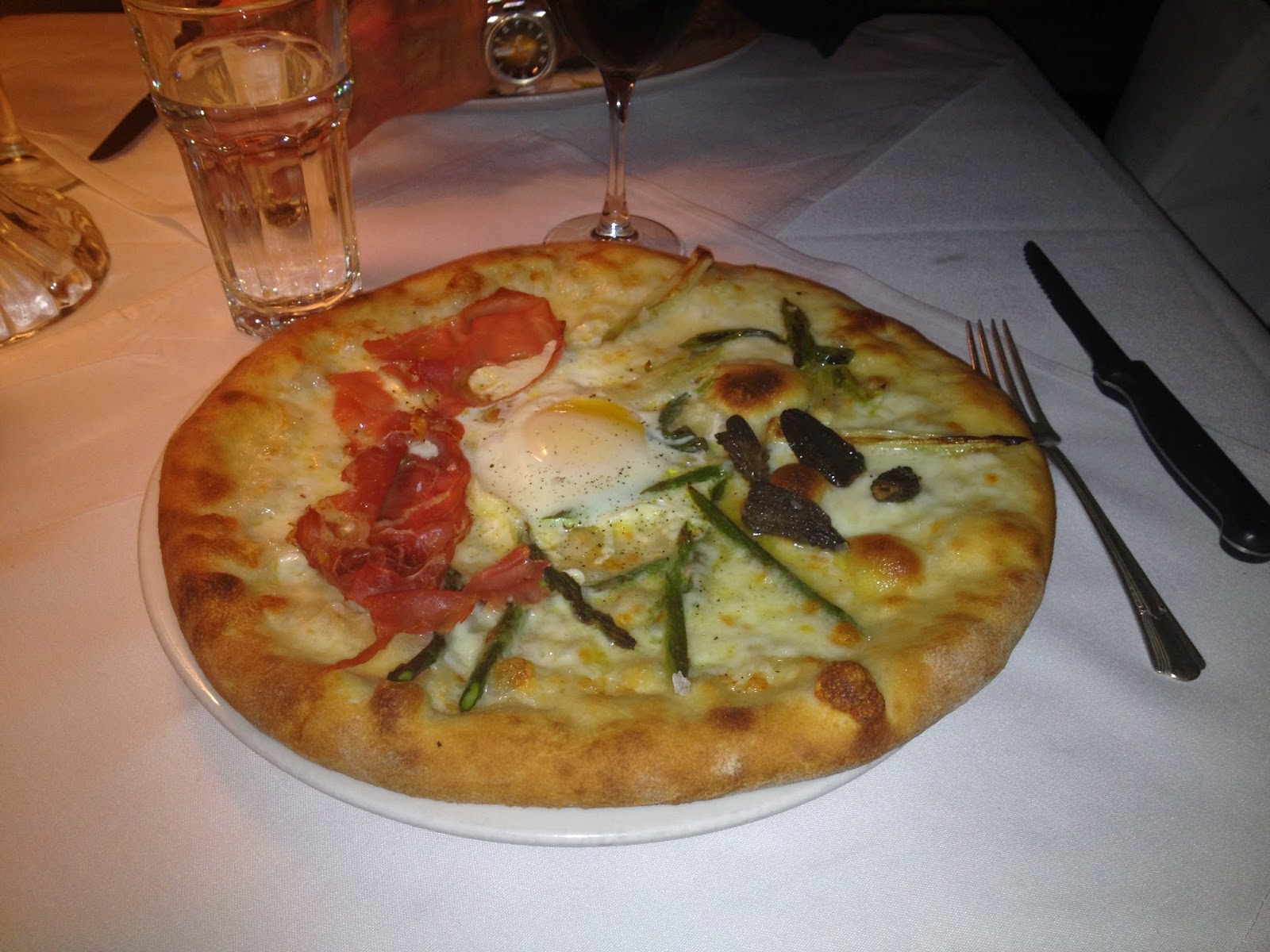 Affogato-  I was quite stuffed so Hubby ended up with most of the dessert to himself.  Not that he would have shared much anyway!  He just inhaled this concoction of espresso, ice cream and whipped cream.  After an appetizer and a main that were mediocre at best, he was at least able to end the meal on a high note. 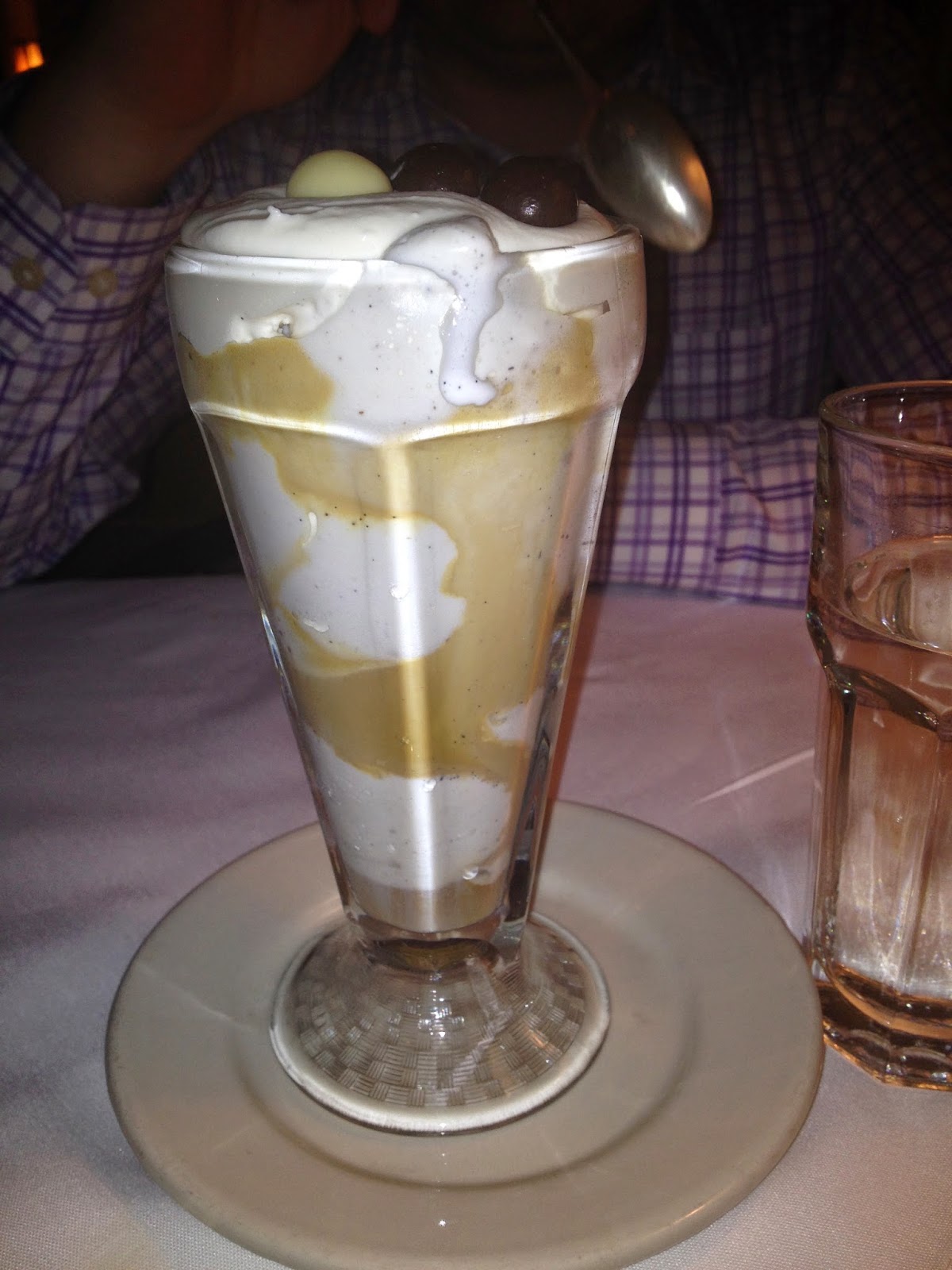 Four Sparrows is a worthwhile experience for people like us visiting from the mainland as it unlike anything that we can experience in a busy city.  A unique atmosphere and first-class service made the meal memorable.  Based on my meal alone, I would say that the food is also well worth the trip but unfortunately, there may be some issues with consistency in light of Hubby's meal.  If you do manage to choose their star dishes like I did, there is no doubt that you will be blown away so in my mind, it is well worth checking out.

Posted by Little Miss Locavore at 17:08