The Stable House Bistro: The New Kid on the Block in South Granville

Locavore Approved? Not Really- Although I do give them credit for a nice selection of local wines, the menu items do not exactly scream "local" (take, for example, my salad with asparagus and tomatoes in mid-December).  "Local" does not seem to be a major focus here (at least yet).

Hubby and I love trying newly opened restaurants, and it especially exciting when one pops up right in our own neighbourhood.  You can therefore imagine our excitement when Hubby came across the newly minted sign for Stable House Bistro a few weeks ago when it was still under construction.  We were instantly intrigued and couldn't wait to see what this place had in store.

Fast-forward to last night when Hubby and I had our first experience at Stable House Bistro.  It has been opened for about a week and was the obvious choice for our Saturday dinner out.

If you do not live in the neighbourhood and regularly walk by the corner of West 13th and Granville, Stable House Bistro would be easy to miss while shopping along the main street.  This is perhaps why they have strung up some white lights along the front to draw the attention of passersby.  The smart black sign with a white horseshoe leads guests in through the front doors into a small yet impressive space. 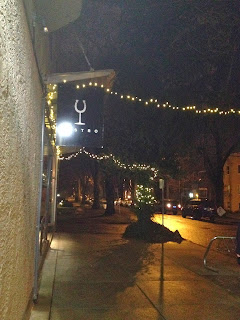 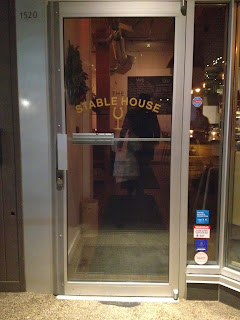 There is a very handsome bar to the right with seating all around and then more seating on the left.  The high ceilings make the room seem larger than it is.  On far left wall is still bare (we were told that they are still waiting for artwork to arrive) but on the other walls, there are chalkboards that display the featured wines, charcuterie and cheeses.  Hubby and I nabbed a great high booth near the bar that was perfect for those like us who like to be in the middle of the action. 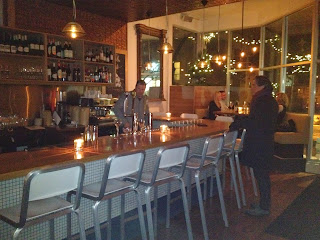 We visited later in the evening (just before 10pm) and there were only two men taking orders and serving food (not sure if they were the owners/managers) and what appears to be only one man in the kitchen.  We were very warmly greeted and made to feel very comfortable.  The service was admittedly pretty slow, especially for the number of people dining at that time, and we waited quite a while between getting our wine, then our water, then finally our food.

The wine menu is concise (about 5-6 each of white and reds) with a few sparkling options.  As previously mentioned, there is a good mix of local and international options.  Hubby and I thoroughly enjoyed our selections (for myself, the Nagging Doubt Chardonnay and for him, the Bere Toscano). 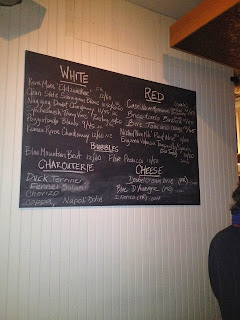 In addition to the charcuterie and cheese offerings on the chalkboards, there is also a paper menu with a limited number of dishes including a daily soup, salads and tarts which appears to be their signature item.  Additionally, there was one nightly special which was a take on Shepard's Pie.  When our server came to take our order, he quite accurately asked us if we wanted any "snacks" with our drinks.  The word "bistro"in the restaurant's name is a bit misleading in my opinion as it would be near impossible to get enough food to for a satisfying meal, short of ordering the full menu to one's self (and this would be quite a costly venture!).  Portions are very small and really best suited for either a quick snack before catching a show at the Stanley Theatre down the road (with plans for dinner later),  an after-work meeting or a late night snack after a night in Yaletown (keeping in ming that it closes at 11pm).  It is possible that they are planning to expand the menu in the next few weeks, but for now I would say that "wine bar" would be a more fitting name.

Hubby and I hesitantly ordered a dish each but it was unclear to us if this was what we were intended to do.  An explanation of how to approach the menu would have been appreciated.

I chose the asparagus salad with prosciutto and goat cheese vinaigrette, which came as a warm salad.  If you are a lover of prosciutto, this salad is for you as this is the main component of the dish.  I myself would have preferred more vegetables in a dish labeled as a "salad" (there were only 2 spears of asparagus, a few halves tomatoes and a little mound of arugula).  Lack of veg aside, the flavours all worked very well today and it was expertly seasoned. 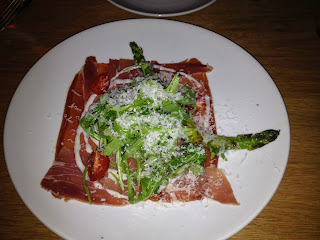 Hubby ordered one of their signature "tarts" which was not exactly as I had envisioned.  It comes as a sheet of puff pastry with one of their three "toppings"- pulled pork (Hubby's choice), mushroom or salmon.  On the side, there is a choice of fries or salad, which ended up being a coleslaw.  Hubby liked the flavours of the "tart", and thought that the coleslaw was quite outstanding. 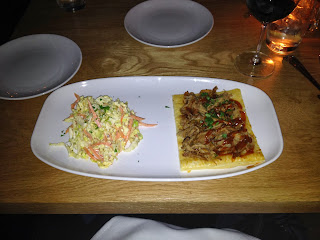 The Stable House Bistro is still in its early days and I think they have potential to be an asset to our neighbourhood. The food was quite good but it was the concept of the restaurant that left us hanging.  We were intrigued enough by the beautiful room and the flavours to return again in a month or two to see how this new restaurant matures with time.  We have high hopes!

Posted by Little Miss Locavore at 23:01