A Long Trek for Small Plates at Kessel and March

Locavore Approved? YES- This is one of the reasons that I really wanted to love this place.  They are partnered with many of my favourite local farms (Urban Digs, North Arms, Sole Foods) and source as many ingredients as possible from them.  They have also been known to hold special dinners featuring some of these farms and their wonderful products.

Kessel and March opened its doors in early 2013 to join the ever-growing fleet of tapas/small plate restaurants in Vancouver.  With this explosion of such restaurants, one would think that the concept would be getting kind of old by now but, in all truthfulness, I am loving it.  Small plates offer the opportunity to try a variety of dishes so that you can really get a feel for the chef and his style, and I cannot get enough.

After great experiences at Farmer's Apprentice and the Parker recently, I was excited to make the trek to Kessel and March.  And what a trek it was!  This place is quite literally located in the middle of nowhere, far out on Powell St. and we admittedly got lost several times before finding it (the sign out front does not exactly jump out at you so keep your eyes peeled!).  You may want to assign a Designated Driver for this adventure as Public Transit would be difficult and, depending on where you live, the cab ride would be costly.  Inside, the space is quite narrow, with the room divided between two levels.  Our party of 6 was seated at one of the largest tables right by the door and in front of the washrooms which made us feel pretty crammed in and uncomfortable.  Perhaps I would have had a different experience had we been upstairs.  The decor is quite minimalist, and it almost felt as if the space was unfinished.  This was especially true of the very open kitchen that occupied a good half of the downstairs space that also served as the bar.

We were told that our reservation was "between 8:30-9" but when we arrived our table was not ready until about 9:15.  This is not usually that big of a dig to me, except for the fact that the 6 of us had to awkwardly in the was small front entrance to wait.  After being seated, we then waited quite some time before being offered drinks, and then quite another while to receive our drinks and food.  In fairness, I believe there was a large party upstairs which may have accounted for the delays.  Aside from the pace, the service was pleasant and unpretentious.

The drink list is limited but contains a good selection of BC beer and wine.  At the time of our visit, cocktails were not offered. 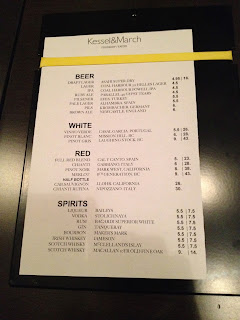 The food menu is tweeted regularly to incorporate seasonal ingredients, however many of the basic concepts of the dishes remain constant (there are always several terrines, a few pasta variations and some soups/salads).  There is a good variety of vegetarian, fish and meat dishes.  We chose to split several dishes between couples however the menu is quite small and therefore, with a group of 8-10 people, you could easily order everything on the menu. 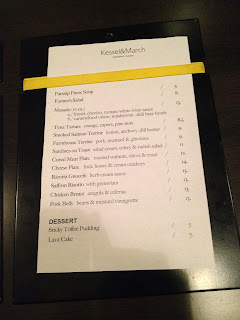 Here were the dishes ordered by myself and Hubby:

Parsnip puree soup- This dish was one of the few dishes on the menu that was not terrible conducive to sharing in the way that it was served, but it is quite a large bowl so it could easily be split into a few servings (quite a steal for $5).  It had good flavour overall, but ended up being too much of the same halfway through the bowl. 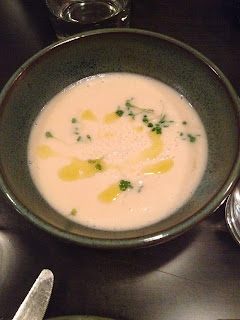 Summer salad-  I am all for simple dishes at a farm-to-table restaurant but this was a bit too simple.  Although the mixed greens and shaved radish were nice and fresh, it needed something else to elevate it  to restaurant quality. 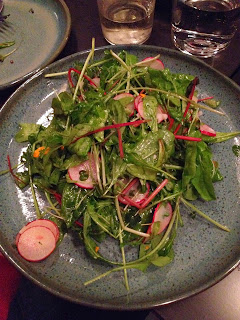 Mussels with caramelized onions, mushrooms and chill beer- Although I am not a lover of either mussels or beer, this dish ended up being my surprise favourite.  The broth had great, rich flavours and I loved the plentiful mushrooms and onions.  It really grew on me! 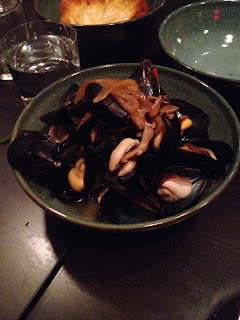 Tuna tartare- The tuna was very fresh and smooth.  I really enjoyed the saltiness of the capers but would have liked to have gotten more crunch from the pine nuts (perhaps it was sitting for a while and they had gone soft?).  The choice of bread served on the side was not a good accompanying choice (too soft and thick).  Flatbread would likely have been the better choice. 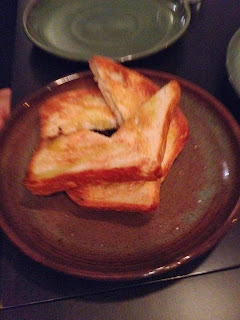 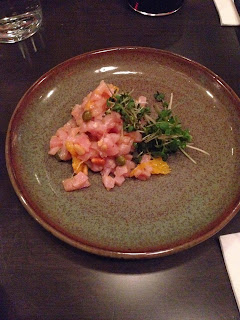 Saffron risotto- This was the worst dish of the night.  It was absolutely devoid of flavour and the rice was overcooked to the point that it resembled porridge.  Not good. 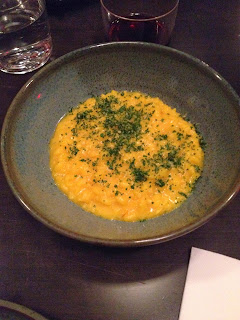 Pork belly- This was Hubby's favourite by far and really the only memorable dish from his perspective.  The portion of pork was very generous and it was packed with flavour.  I ate most of the beans and kale on the side, and they were very delicious. 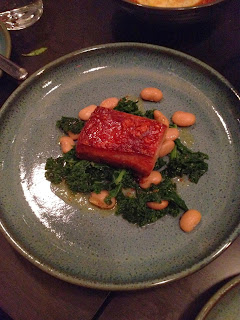 Lava Cake- This was a pretty pedestrian dessert and nothing special in terms of taste or presentation.  It has been done many times and this version was nothing new. 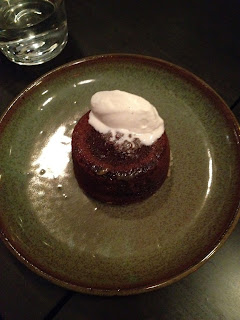 Here are the snapshots of the dishes ordered by our friends.  I cannot really comment on the taste since I did not try them myself:

Overall, I would have to say that our experience at Kessel and March was not really worth the trek.  Although they had been opened for several months, it seemed as if there were still many kinks to be worked out, including flaws in dish conception and execution.  I also found the atmosphere to be quite lacking.  While I do appreciate their partnership with local farms and their very reasonable prices, I am sorry to say that I will not be a return customer.

Posted by Little Miss Locavore at 17:57