It will be 3 years in June that I left Toronto to move to Vancouver after 4 years of living in this great city.  While I love Vancouver dearly, Toronto still has a little place in my heart, with many fond memories of friends, school and, of course, food.

For the past few days, I have had the pleasure of returning to Toronto for a conference, and, in 3 short days, have managed to get around to many of my favorite food spots (and still get to most of the conference!).  Here is the ground that I was able to cover:

Fresh:
This was my very first stop upon arriving in Toronto.  My flight arrived at 8pm, I was downtown by 9pm, I checked into the hotel and dropped by bags by 9:15 and off I went to Fresh, putting in my takeout order on the way (they close at 10pm so I just made it!).  I went with the All Star salad- a bed of kale topped with quinoa and adzuki bean tabouleh, sweet potato, goji berries, herbs, sunflower sprouts and tofu steaks which I subbed out for tempeh (Fresh makes the best tempeh I have ever had!).  My choice of dressing was a peanut-lime dressing made with coconut milk.  What a fresh, delicious way to start my trip!  Wish I had time to return for one of their rice bowls (Beach, Green Goddess and Powerhouse are my faves!), but with only 3 days, I had to move on to rediscover my other old favorites! 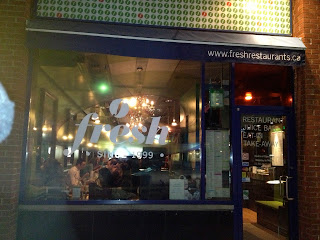 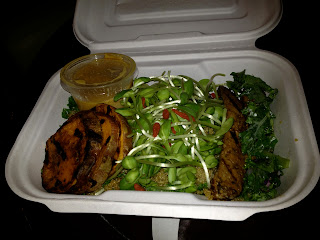 Urban Herbivore:
Every Sunday afternoon when I lived in Toronto, I walked over to Kensington Market (rine, shine, sleet, you name it) to pick up some groceries and get my ritualistic Sunday night dinner- a salad and muffin from Urban Herbivore.  They have a "make-your-own" salad/grain bar with ingredients of every kind- vegetables (raw and cooked, plain and spiced), beans, grains, tempeh, tofu and a nut-seed mix.  Five of these were tossed with dressing (red wine and dijon is my fave!) and either greens or grains (rice or quinoa).  Nostalgic.
And even if you do not want a meal, you MUST go to Urban Herbivore to get one of their spelt flour muffins (vegan).  These babies are incredible- so moist, so flavorful (not too sweet) and come in great flavors (try the sweet potato date!).  If I had to pick one food item only to eat while in Toronto, this would be it, hands down.
When I live here, Urban Herbivore only had only 1 location, but now has 3, including one in the food court of the Eaton Center (the new food court called "the Eatery" is probably the nicest food court I have ever seen).  Urban Herbivore muffins and shopping- a match made in heaven:)
A third Urban Herbivore is located in Octopus Garden Holistic Yoga Centre, where I had the pleasure of doing an evening flow yoga class, complete with a live DJ. 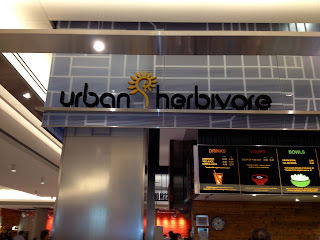 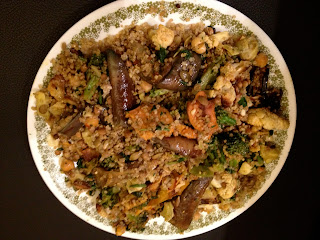 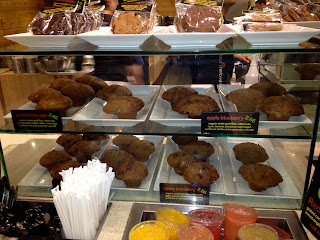 Vegetarian Haven:
This great little vegetarian restaurant is tucked away on Baldwin St, which I discovered while working at Mount Sinai Hospital.  The street is lined by restaurants, all of which are very busy during the lunch hour.  Although there are many great choices (I noticed a few new openings since I left), I highly recommend checking out Vegetarian Haven.  It is quite a nice restaurant inside, and the staff are very friendly.  The food has an Asian influence, but there are many original dishes which are very creative.  I have tried many tasty dishes off the menu, but the dish that keeps me coming back is the Sizzling Eggplant in Spicy Coconut Curry.  True to its name, it is a heaping mound of eggplant and a myriad of other fresh veggies (these guys do not skimp on veggies!) plus tender tempeh strips, served with purple rice on a sizzling iron platter.  It is covered in a creamy, spicy coconut curry that you will not want to leave one drop of (ask for a spoon!).  Rich and mouthwatering. 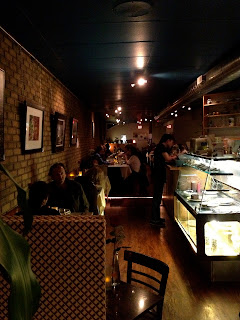 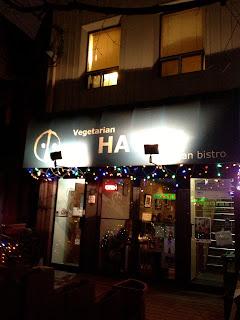 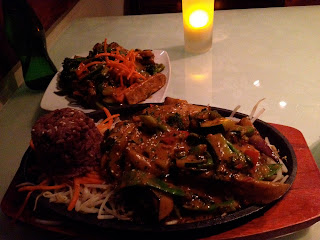 Mercatto:
Although not on my favorite list from my previous life in Toronto, I have been to Mercatto several times and have always had a nice experience.  They have several downtown locations, including their Eaton Center restaurant, which I visited this go around. I must commend Mercatto on pushing the boundaries of shopping center food and providing customers with a dining option other than the typical (often boring) chain restaurants and food court stalls.  Mercatto at the Eaton Center seems to consistently draw large crowds at lunch, comprised largely of downtown businessmen and women (or at least as it appeared the times I have been there).  The space itself is modern and chic, and you will surely forget that you are in a mall within a few minutes of arriving.
We went to Mercatto with quite a large party of 12 and they accommodated us with ease.  Service was friendly and attentive, while at the same time being very efficient as it needs to be for those coming for a business lunch.  We shared a few appetizers including the fried calamari and the meat and cheese board, which were both very well done.  Most of my fellow diners enjoyed pastas (they have a wide assortment of choices to suit picky and adventurous eaters alike), while I chose the beet salad with burrata and arugula (lovely in its simplicity).  Mercatto also offers a number of pizza and meat/fish options.  I also urge you to munch on the packaged Italian breadsticks on the table as they surprisingly delicious. 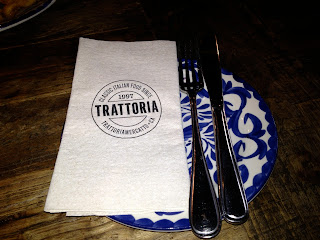 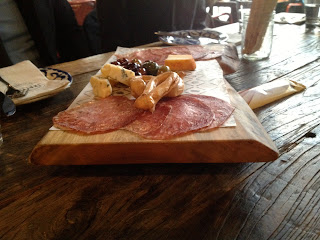 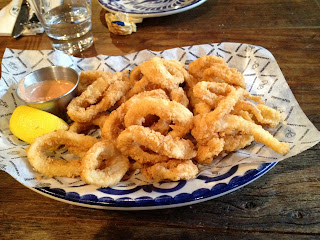 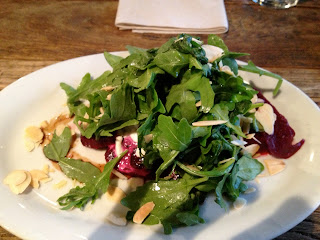 Spice Route:
One of our group dinners took place at Spice Route, a trendy “Asian fusion” bar/restaurant located on King West.  I must admit that I was not too keen on this choice initially as I had been here previously and had a rather “ho-hum” experience all around.  I recall it being noisy to the point of being obnoxious, with food that was lack-luster.
I must say though that, after this most recent experience, Spice Route has moved up in my books.   While the loud, clubby vibe is still not totally my thing, especially for a date or small group of friends, it was a fun place to go with a large party for a night out.  The food had been ordered in advance, and we were treated to a tasting menu of 12+ dishes to be shared between 6-8 people.  Dishes kept on rolling out over the course of a few hours, served by very friendly wait-staff.  There was a very good mix of vegetarian, seafood and meat options.  Some of my favorites included the wasabi tempura shrimp and the garlic bok choy and the meat eaters at the table enjoyed the kobe carpaccio.  I would advise to stay clear of the kimchi fried rice (thought this would be one of my favorites but it was very lacking in flavor), the chow mein (pretty much just a big plate of boring fried noodles) and the salmon which was quite overcooked.  Dessert was also done on a sharing plate (cheesecake, chocolate cake, fried banana, crème brulee) and was enjoyed overall, although a few lighter dessert options may have been nice.  If you decide to come for a similar tasting menu, I would advise you to come hungry!  Our group could not even come close to finishing all of the food, although there were no complaints about this as many went home with lunches for the next day (or week!).
Overall, my view of Spice Route has somewhat changed and, while it does not make it onto my “top of Toronto” list, I would happily return there again for a large gathering.

Although I am happy to return to Vancouver, I have had a very pleasant few days in Toronto enjoying a great conference and taking a nice trip down memory lane.  And I have not left empty handed.  Just prior to departing, I bought the best ever souvenir- a half dozen Urban Herbivore sweet potato date muffins!!!

Posted by Little Miss Locavore at 23:24