Locavore approved? Not really (Although they get kudos for having the "Oceanwise" approval for sustainable seafood, there is not much else on the menu that is true to the local movement.  In looking back through past reviews, it does not appear that the menu changes seasonally).


After having drinks there with work colleagues on a number of occasions, my husband has been trying to get me to go with him to Tableau for dinner.  With such continuous buzz on the Vancouver food scene, Tableau had previously been off my radar in terms of hot spots.  That is until it was awarded "Best Casual French" at the Vancouver Magazine Awards, ahead of Les Faux Bourgeois (still on my to-go list) and, in third place, Pied-a-Terre where we recently had an outstanding dining experience (click here to read full review).  With such a notable award, I decided that it was time to check Tableau out to see what it was made of.

Tableau is located in the Loden hotel in downtown Vancouver near the business district.  In the past, I have avoided hotel restaurants as they tended to be quite boring with mediocre food quality.  In the last couple of years, however, this whole notion of ho-hum hotel food has been turned on its head, with the some of the hottest Vancouver restaurants now residing inside hotels (La Pentola, Yew and, of course, Hawksworth).

The outside of Tableau is quite unassuming with its simple blue awning, which I thought was quite appropriate and true to the french food it offers.  The atmosphere inside, however, did not invoke feelings of France.  The decor was more trendy and the bar looks more like it belongs in an American pub.  In comparison with Pied-a-Terre that had a very quaint, neighborhood feel that you would expect in a cozy french cafe, Tableau was much noisier and had much less character in my opinion. 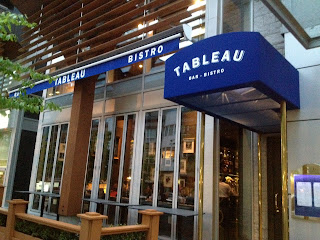 After reading very positive reviews about the "outstanding" service at Tableau, I was expecting good things.  Unfortunately, what we actually got was some of the poorest service that I have received at a restaurant of this calibre in a long time.  I say this for several reasons.  First of all, our server had no clue what was served with the evening's specials (all he knew was that the dish had something to do with ling cod and some smoked trout).  Secondly, after asking for a few more moments to peruse the winelist, the same server hovered over us until we felt compelled to order any glass of wine just to get him to leave us alone.  He did the same for our food order.  I appreciate that the restaurant was busy but guests should not feel this rushed!  Fortunately, for the rest of the meal, we had different servers refilling our water and clearing our plates, with him only returning sporadically to ask us if we needed anything else (at which point I felt the need to clutch onto my plate so he would not whisk it away!), so things went more smoothly.  I am willing to chalk this up to this server being perhaps new and inexperienced (at least I hope this is the case!) but this poor service really left a sour taste in my mouth.

Tableau's menu is short and to the point, and has a small selection of appies, shellfish, mains and nightly specials.  The night we visited there were also a number of other feature dishes available.  Here is what we chose:

The night began with some bread (french baguette of course) for the table. 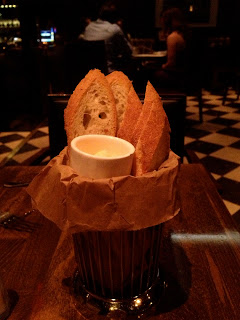 Kusshi oysters- My husband's love for oysters continues to grow, and it has become routine for him to order some in addition to his appie whenever he sees them on the menu.  Kusshi oysters, a smaller variety, are his favorite, and he quite enjoyed Tableau's offering, complete with horseradish and a simple mignonette.  Nothing too out of the box, but well executed and nicely presented.  There is really no need to mess too much with such a nice product. 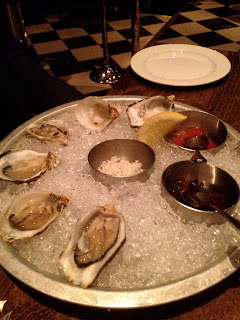 Trout Tartare- This was a special for the evening and was by far the highlight of the evening for me.  The beautiful, smooth fish was cut into small pieces, and served underneath a layer of mashed avocado.  Alongside was a little frisee salad and a few thin piece of plain, crispy baguette (a few more pieces would have been useful to scoop up all of the tartare).  A little quail egg on the top added was a nice touch, but for texture and presentation. Overall, it was a very successful and well-seasoned dish. 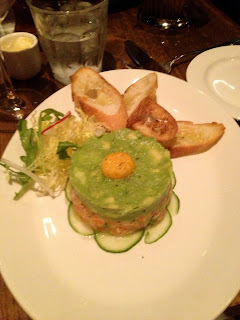 Steak Tartare- Fortunately, my husband enjoyed his tartare just as much as I had enjoyed mine.  His tartare was served simply with a little frisee salad and a side of pomme gaufrette (thinly-sliced fried potatoes).  It was expertly seasoned and the potatoes were a nice change from regular bread.  The chefs at Tableau certainly have the art of tartare down to a science! 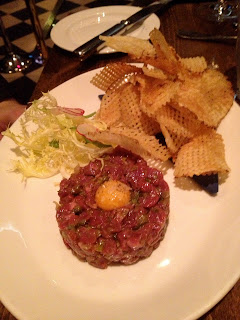 Steelhead Trout- I was really looking forward to this main dish, as I had read many commendable reviews of it online.  Unfortunately, it fell a bit flat for me.  I generally love quinoa, but I found this particular quinoa fairly bland and lightly undercooked.  The sauce overtop (supposedly a lemon brown-butter sauce, although it really did not taste like like to me) was quite overwhelming and very salty, such that I could not really taste anything else on the plate.  Worst of all, the fish was overcooked and the "crispy" skin was not really crispy.  Overall, a bit of a let-down. 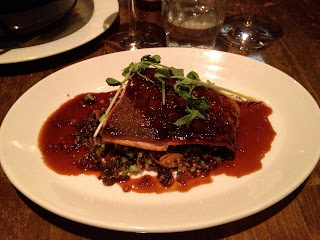 Mixed vegetables- Since there were no vegetables served with my trout, I decided to order the side of mixed vegetables, which ended up being an assortment of winter vegetables including carrots, baby turnips and green beans.  While I enjoyed the vegetables themselves (fresh and well-cooked), the butter sauce overtop was quite bland and I would have much preferred just a bit of salt and pepper, especially since the vegetables were meant to be ordered with a main that already had its own flavors. 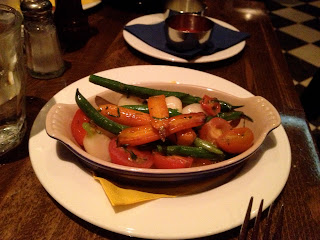 Moules Frites- Being the shellfish lover that he is, my husband felt compelled to order the moules frite as his main since they are one of Tableau's specialty dishes.  He very much enjoyed the mussels, served in a creamy tomato sauce with grape tomatoes and onions.  Unfortunately, the fries were practically inedible as they were severely overcooked, and tasted as if they had come out of the fryer hours earlier. He did not bother eating the fries, but did enjoy every last mussel. 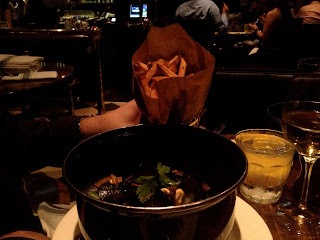 So do I think that Tableau lives up to its title as "Best Casual French"?  Not really.  Although we enjoyed the starters, the food seems to go downhill from there, and the service was subpar.  The next time I am in the mood for French fare, I will opt for some of VanMag's runner's up (Les Faux Bourgeois, La Regalade, Pied-a-Terre) instead of making a return trip to Tableau.  Perhaps we just hit visited on an off night, but with so many other good choices, we will likely go elsewhere.

Posted by Little Miss Locavore at 11:35