Way Too Much Attitude at Amsterdam's Yamazato

Locavore Approved?  Not really- Yamazato focuses on authentic Japanese cuisine and therefore more on traditional Japanese ingredients then local ones.  Having said that, their fish was extremely fresh, making me think that it is caught closeby, and they do have a “Chef’s Recommendation Menu” that changes monthly . 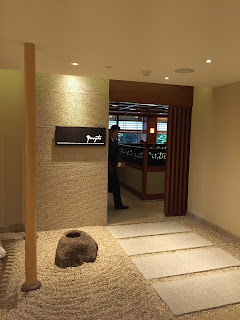 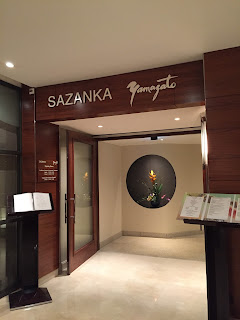 "If you don't have something nice to say, don't say anything at all".

Although this old adage still holds true, I feel compelled to say a few, not-so-nice words about Yamazato.

Yamazato is a one-Michelin Star Japanese restaurant located in the Hotel Okuro in Amsterdam, which also houses the swanky two-Michelin Star Ciel Bleu.  Yamazato caught my eye as I was scouting out restaurants prior to our trip as it is the only Michelin Star restaurant outside of Japan to serve "kaiseki" Japanese cuisine, a special type of Japanese dining that was served at elite tea ceremonies in earlier centuries.  It emphasizes harmony between the food, the plates on which the food is served and the surroundings.  As per the website, they strive for excellence from start to finish, from the ingredients to the presentation, at all costs.

Unfortunately, I think they lost site of something very important in their quest for excellence- some guests may actually want to have a good time.  Because at the end of the day, no matter how good your food and your plating are, what is the point if your guests feel too unwelcome and uncomfortable to enjoy it?

Our unfortunate experience at Yamazato started hours before our reservation time.   We were out for a walk around Amsterdam and happened to find ourselves in the neighbourhood so we decided to stop in to check it out and confirm our seating time.  As we approached the entrance of the restaurant, the women at the front desk glared at Hubby disapprovingly and tersely told him that the restaurant had a dress code and that he was “ not to show up like that tonight” (meaning in shorts).  Hubby was quite taken aback by her uncalled for scolding (we were out for a walk for Pete's sake!) and this really left him with a bad taste in his mouth heading into the evening.

Unfortunately, things only went downhill from there.

The service blunders continued again just seconds after we were seated.  A server who was present for Hubby's "scolding" earlier in the day just happened to walk by our table, took a look a Hubby's attire (a suit, with tie) and gave him a thumbs-up as if to say "OK, we now you make the cut".  As if we really needed to be reminded once again of the disgraceful earlier episode.  We then noticed the sign on the table, showing a phone with a line across it, indicating that we were not to have cell phones out at all during the meal.  I felt as though I was in grade school again.  The snobbery just kept on coming, with stone-faced men in suits (? managers) pacing around the room staring at guests and ensuring that cell phones were out of sight and keeping the noise level at an acceptable level.  I felt as though I needed to sit up pin straight and whisper the entire time.  I have had few experiences when I have felt that uncomfortable and uneasy.  Lastly, there was the issue with the actual food service, when Hubby requested a chicken appetizer which he wanted served before his sushi.  Our server denied his request, saying that cold food needed to be served before hot food.  Sorry, who is the paying customer here? There are other smaller beefs that I could bring up, but I think this will suffice as it makes me too cranky to spend more time thinking about it.

So as you can probably tell, the service ruined our night and I don't think that even the best food in the world could have resurrected it.  With the exception of the Omakase sushi which Hubby considered well above average (it should be considering it was 45 euros for a dozen pieces of simple nigiri), the meal was nothing to write home about.  Although I did quite enjoy the seaweed salad (Kaiso Avocado Salad) with its many varieties of seaweed, my eggplant with bamboo shoots (Naso Takenoko Hasami-yaki) tasted like something I could get at a nice Japanese restaurant in Vancouver for a quarter of the price (boring).  Hubby's deep fried marinated chicken from the appetizer menu (Tori Tatsuta Age) was also a real flop- 20 euros for plain dry deep-fried chicken with no sauce to save it.  There was also the 7 euros for the teeny-tiny bowl of miso soup we had to start.  Hubby and I certainly do not mind paying for Michelin Star meals but we expect quality that usually comes with it!

Overall Verdict?
As you can probably guess, we will NEVER be back.  I cannot comprehend how such an stiff and pretentious experience could appeal to anyone and frankly, even the food did not impress us all that much.  This is BY FAR the worst Michelin Star experience Hubby and I have had, and unless you enjoy sitting through uncomfortable and unpleasant meals, I would advise you to skip Yamazato on your next trip to Amsterdam.

Posted by Little Miss Locavore at 23:30