Locavore Approved? YES- The slogan at Juniper and Ivy is "Refined American Food with Left Coast Edge" and I love how "left coast" ingredients are showcased so well here.  Menus are printed daily with a least a few new dishes every day using the freshest of seasonal ingredients.  This takes considerable effort on the part of the chef Blais and his team but it is SO worth it!

I was very excited when I heard that the conference I would attending was to be held in San Diego, a place that had been on my radar for quite a while.  With its beautiful weather, expansive parks and stunning water views and, of course, its great food scene, San Diego is a very desirable destination.

Being the Top Chef fan that I am, I could not bear to visit San Diego and not visit Chef Richard Blais' new restaurant, Juniper and Ivy.  Since opening in March of this year, Juniper and Ivy has garnered many accolades from food critics and the press.  It must be doing pretty well since Blais has already opened up about opening a second new restaurant right next to Juniper and Ivy with a more casual vibe.   Add to that the fact that he has moved up in the Top Chef ranks and is now the guest judge on Top Chef Boston.  Pretty darn impressive if you ask me!

Juniper and Ivy is located in Little Italy, just off the main drag on a little side street at the corner of (you guessed it) Juniper St. and Ivy St.  The space is massive space with an almost "clubbish" vibe.  As you walk in, there is a large bar at the front of the room just behind the hostess that was PACKED when we arrived at 8pm and was still buzzing when we left around 9:30.  At the back is a very large open kitchen, which is needed in order to accommodate the incredible number of guests that fill the room on a nightly basis.  In the hour and a half that we were there, between the inside space and the outdoor terrace, I cannot even begin to fathom the number of tables they were able to turn.  Good on ya Richard Blais! 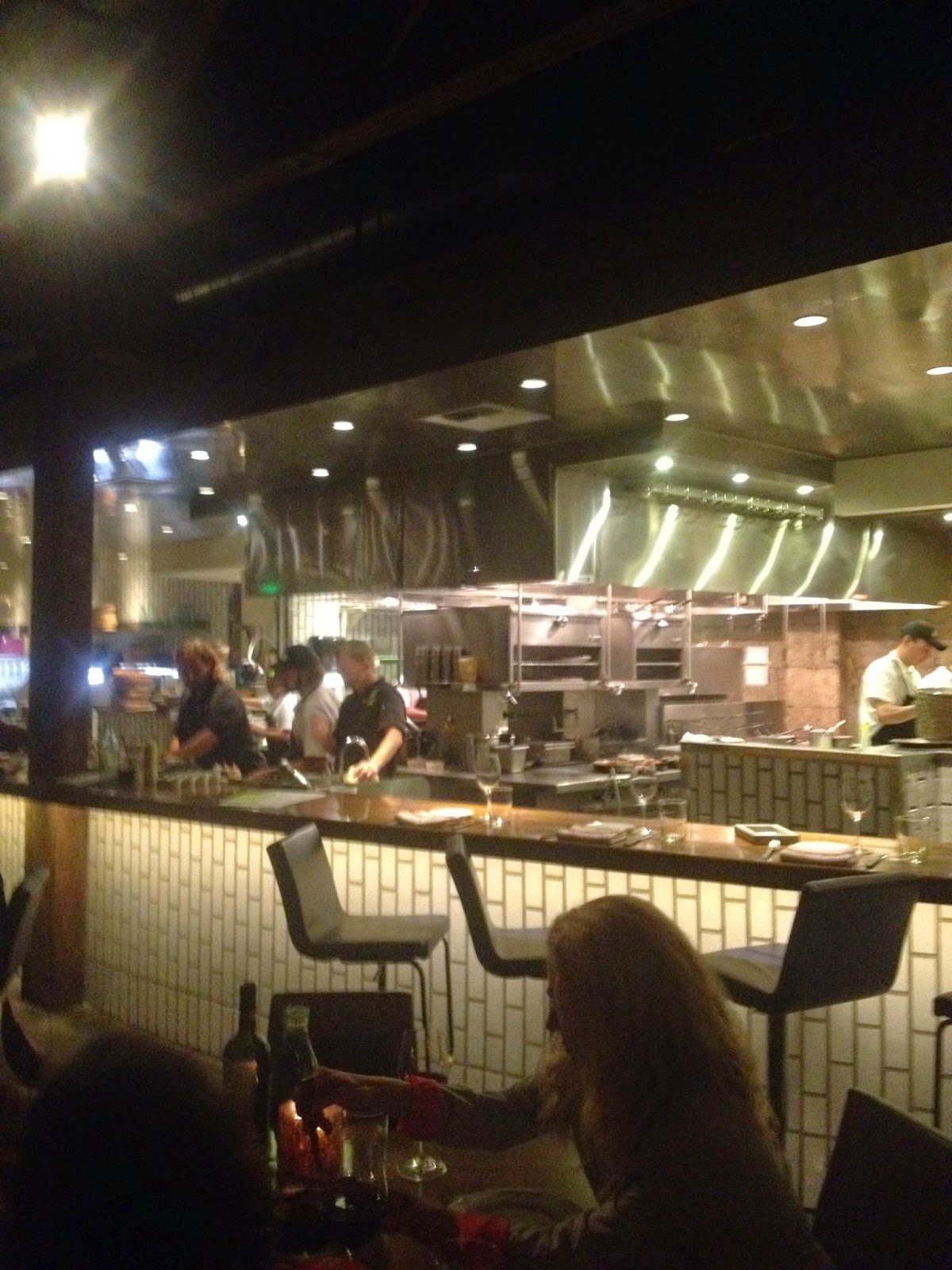 Service at Juniper and Ivy was just as low-key as the atmosphere.  There was not a hint of "snob" to be had.  Our waiter was very approachable and never made us feel rushed despite the Saturday night rush.  He was also able to give us some good recommendations for drinks and food, and came back to check with us shortly after each dish was delivered to ensure that it was to our liking.  He was happy to entertain any questions about ingredients or preparation, and knew the answers like the back of his hand.  The only unfortunate thing from a service standpoint was that they had run out of 2 of the dishes that we requested.  This was a disappointment but our waiter was quite apologetic and explained that they sometimes underestimate the quantity of the dishes they will sell, especially those that have been added to the menu that day.

As one can likely guess from their enormous bar, Juniper and Ivy take their drinks seriously.  They have a very extensive wine list, which they have cleverly divided into "tried and true" wines for the more traditional and "leap of faith" wines for the more adventurous.  In addition, they also have a few daily wine picks printed on the food menu.  They also offer a great collection of cocktails.  I thoroughly enjoyed the Sunday Pitcher, a gin-based drink, more bitter than sweet with the addition of grapefruit. 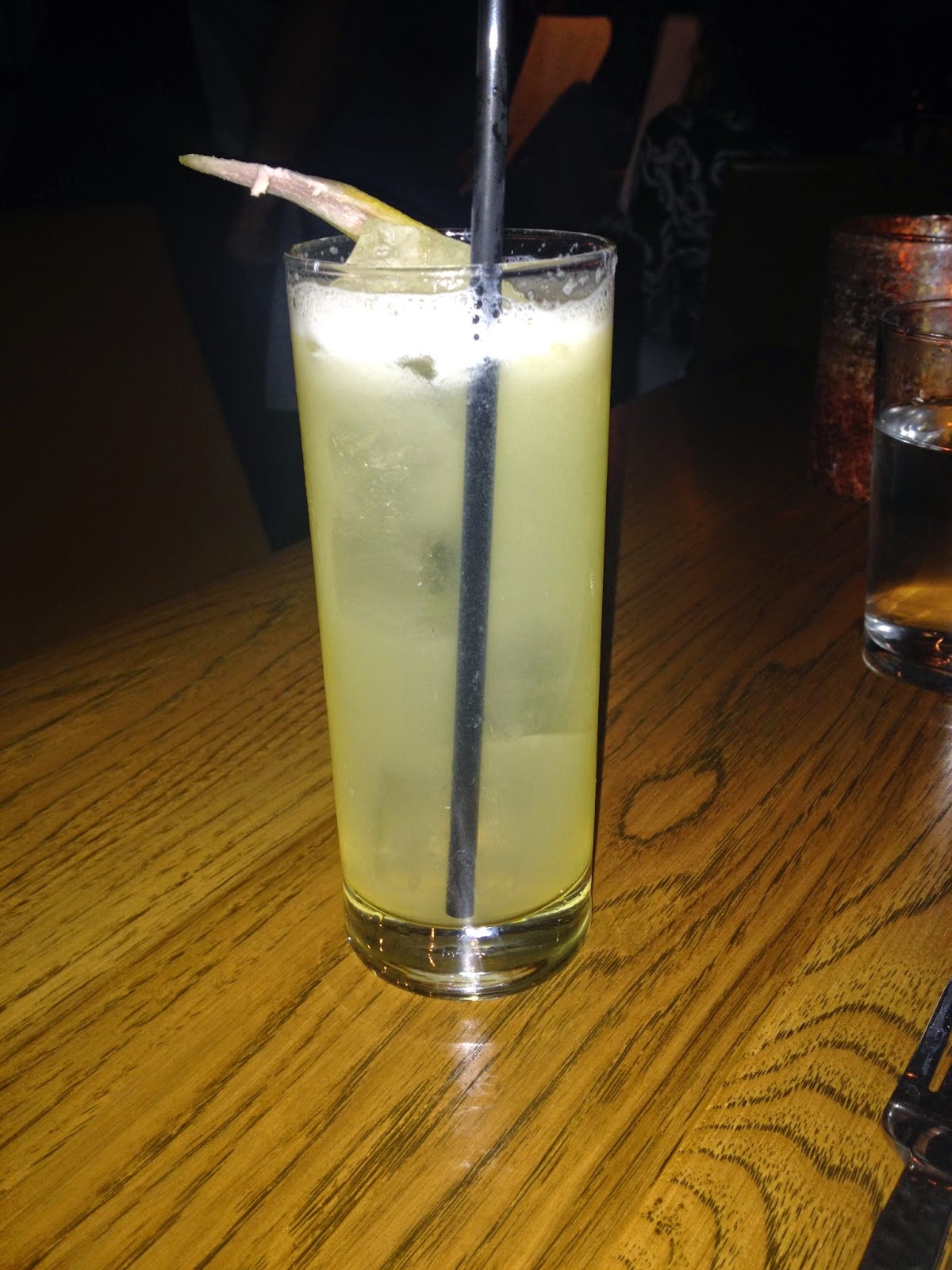 The menu that Chef Blais and his team have created is impressively ambitious in the sheer number of dishes offered.  It is divided into snacks, raw, pastas, toasts, small plates and large plates.  As per our server, diners can either select a variety of dishes from each section to share as a table or choose a small plate and entree for oneself.  I would highly encourage sharing as, with such a variety of dishes on the menu, it seems like a shame to try only two.  The prices are very reasonable ($115 minus tip for our food, a cocktail and 3 glasses of wine between us) and we left quite satisfied.

Here is a peek at our meal:

Biscuit-  Being someone who could take or leave carbs, I would never have ordered this had I not read the online reviews saying that this biscuit could "change your life".  After experiencing it for myself, I admit that this decadent, dense biscuit is something that everyone needs to try once.  Caution- you may want to share, as eating the whole thing yourself (however tempting) may limit the number of other dishes on the menu you can try. 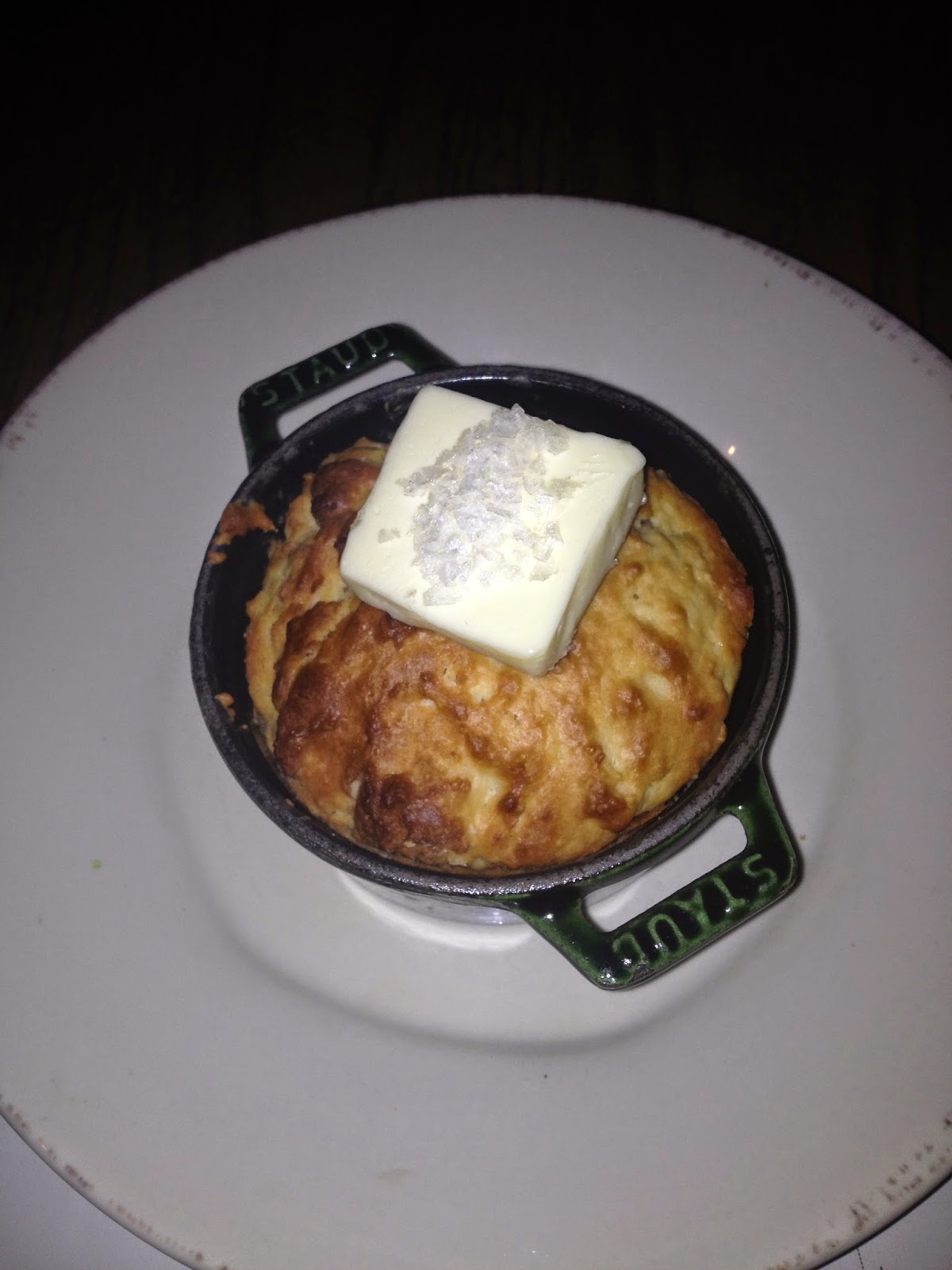 Persimmon Toast- My mother and I agreed that this was the winning dish of the night.  It was actually  pretty simple but the idea of putting slices of sweet-and- sour persimmon slices on toast with burrata is absolute genius. Add some basil and pine nuts and you have a dish made in heaven.  Order it while you still can!!! 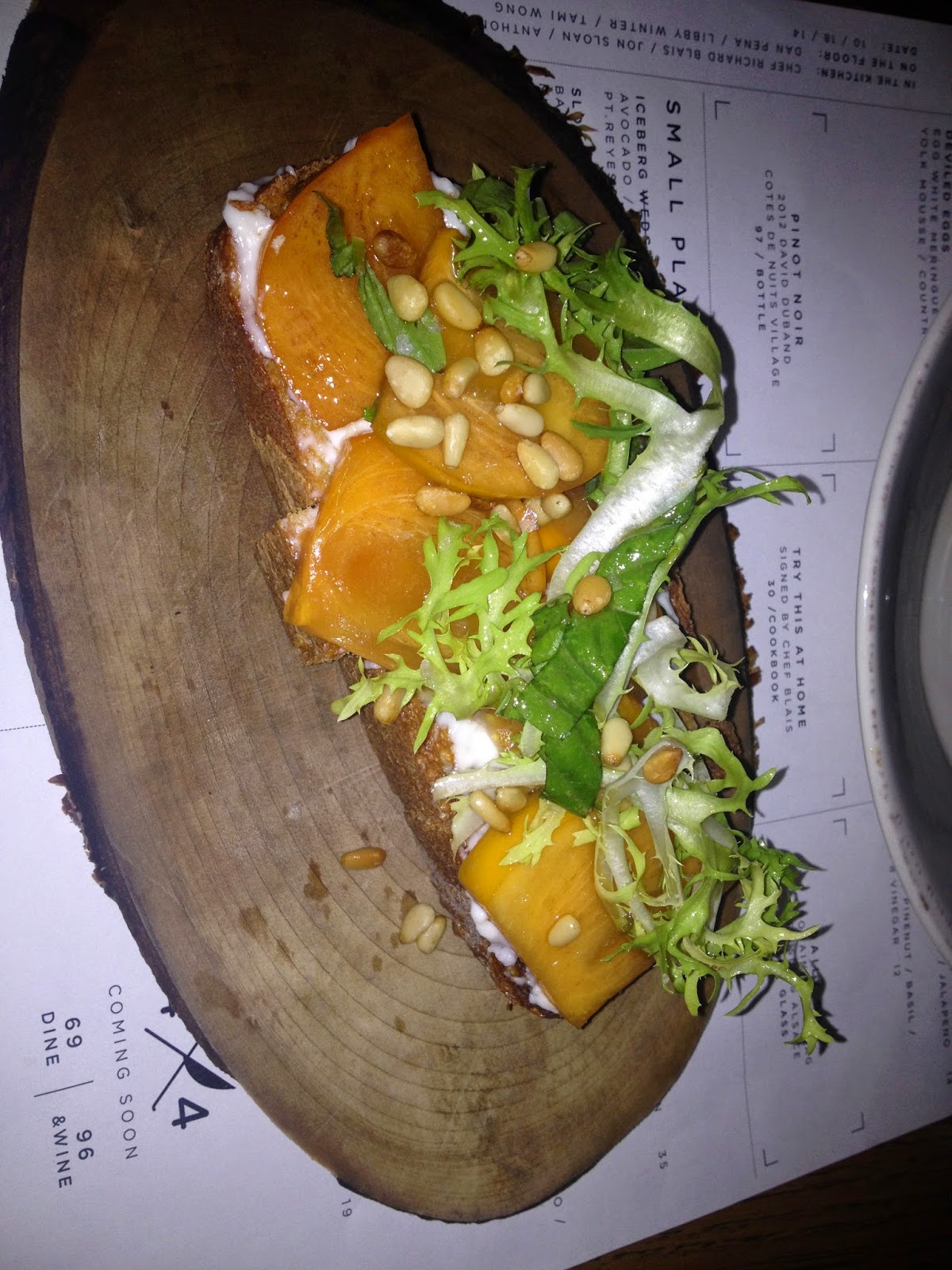 Sweet potato ravioli- All there is to say is "pumpkin pie".  This could have almost been a dessert dish but hey, who could ever say they mind dessert in the middle of their meal?  Loved the almost burgandy The sweet potato filling was a deep red color (beautiful!) which we were told was from the different variety of sweet potato used.    My only minor comment would be that the pork belly was quite unnecessary and may have even detracted a bit from the dish. 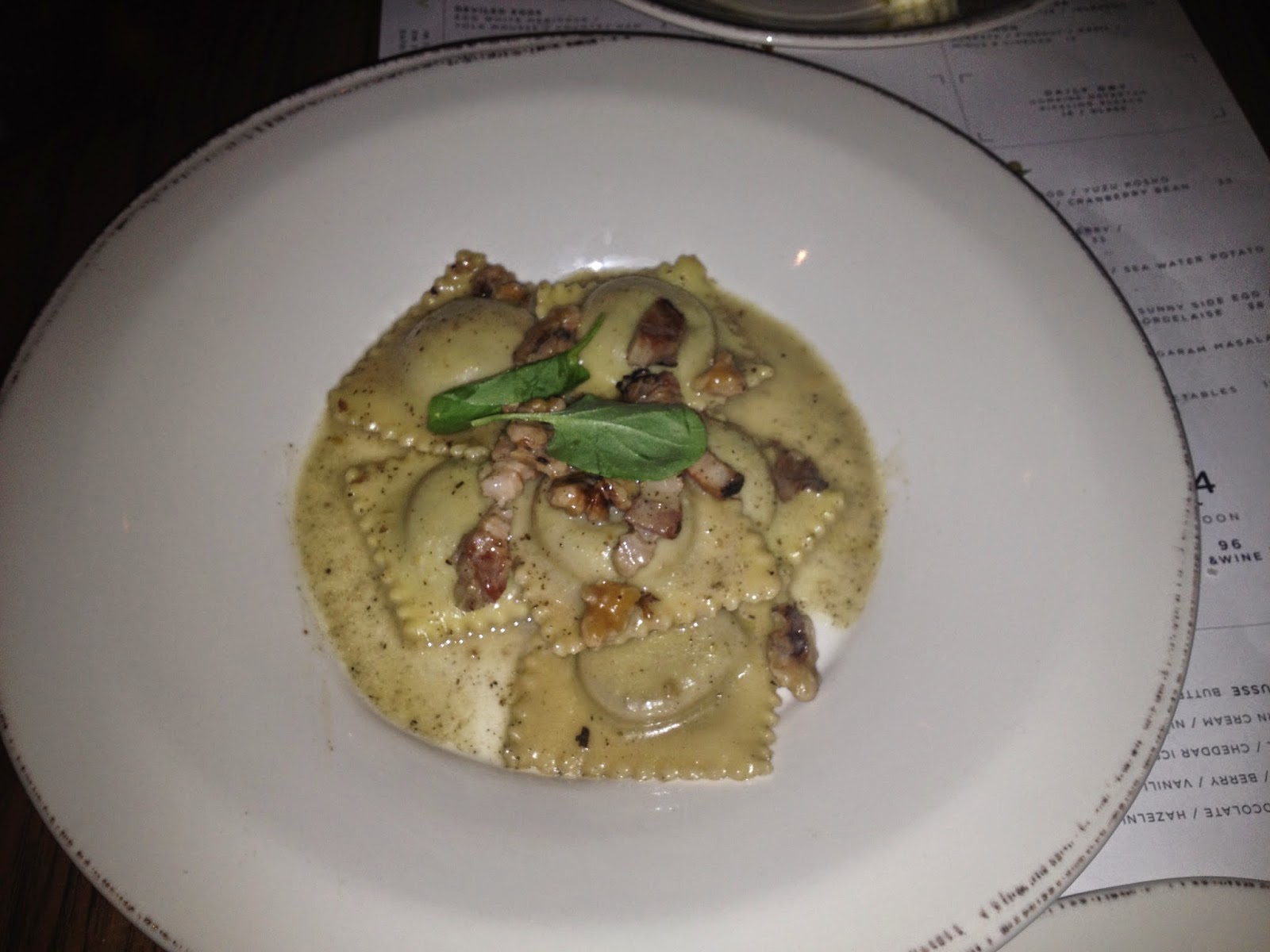 Beet- This was my runner-up dish for the night behind the belowved persimmon toast.  I have had my share of beet salads in my day but this one really stood out.  I loved how the beets were left whole in this dish, and the ricotta the beets were perched on was spectacular. 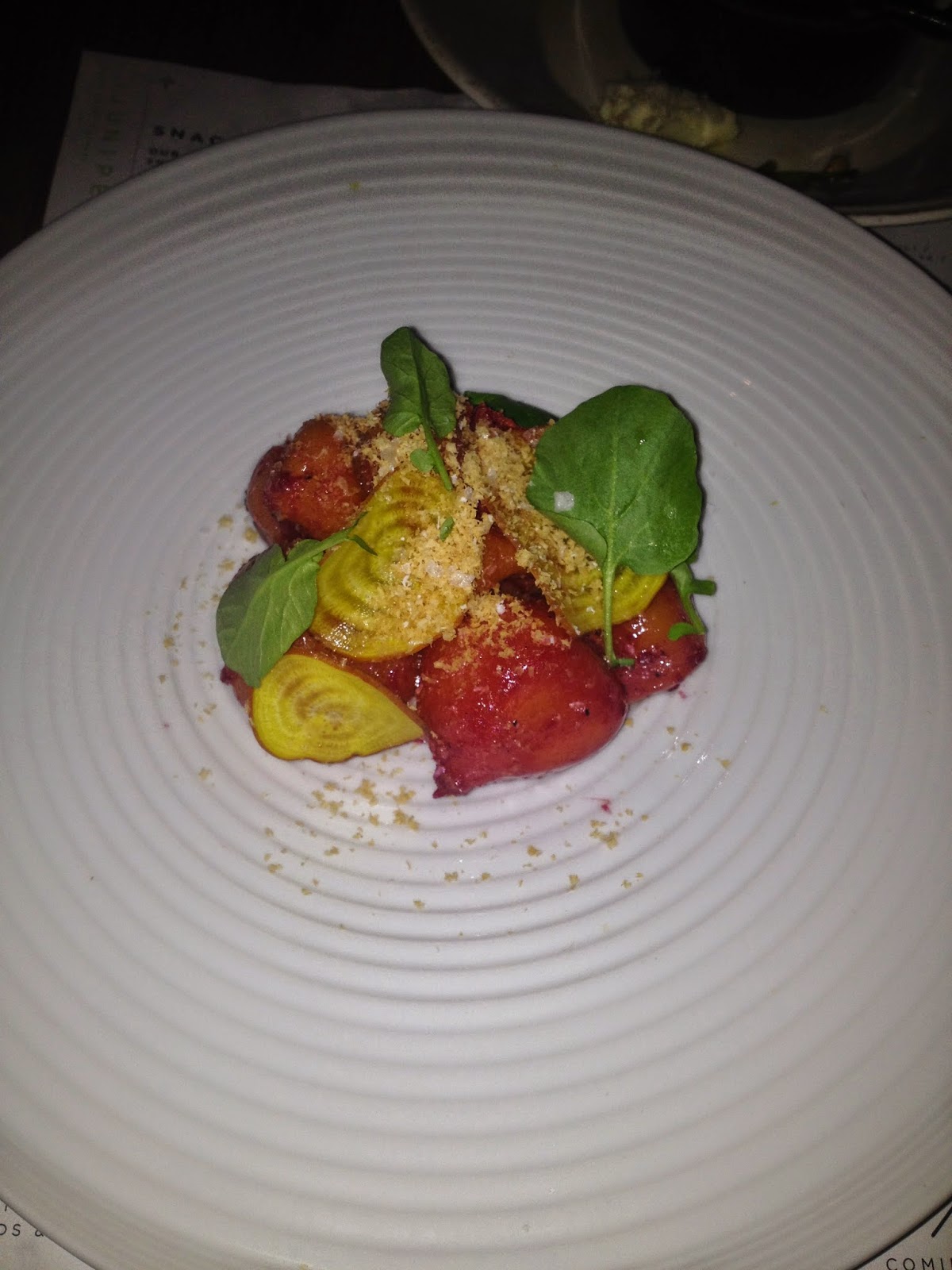 Heirloom tomatoes- This was my least favourite dish on the menu and it seemed a bit out of place on a menu that was otherwise so "autumn-ish" in terms of flavour profiles and ingredients.  I did appreciate the nice variety of tomatoes used but found the feta "ice cream" underwhelming. 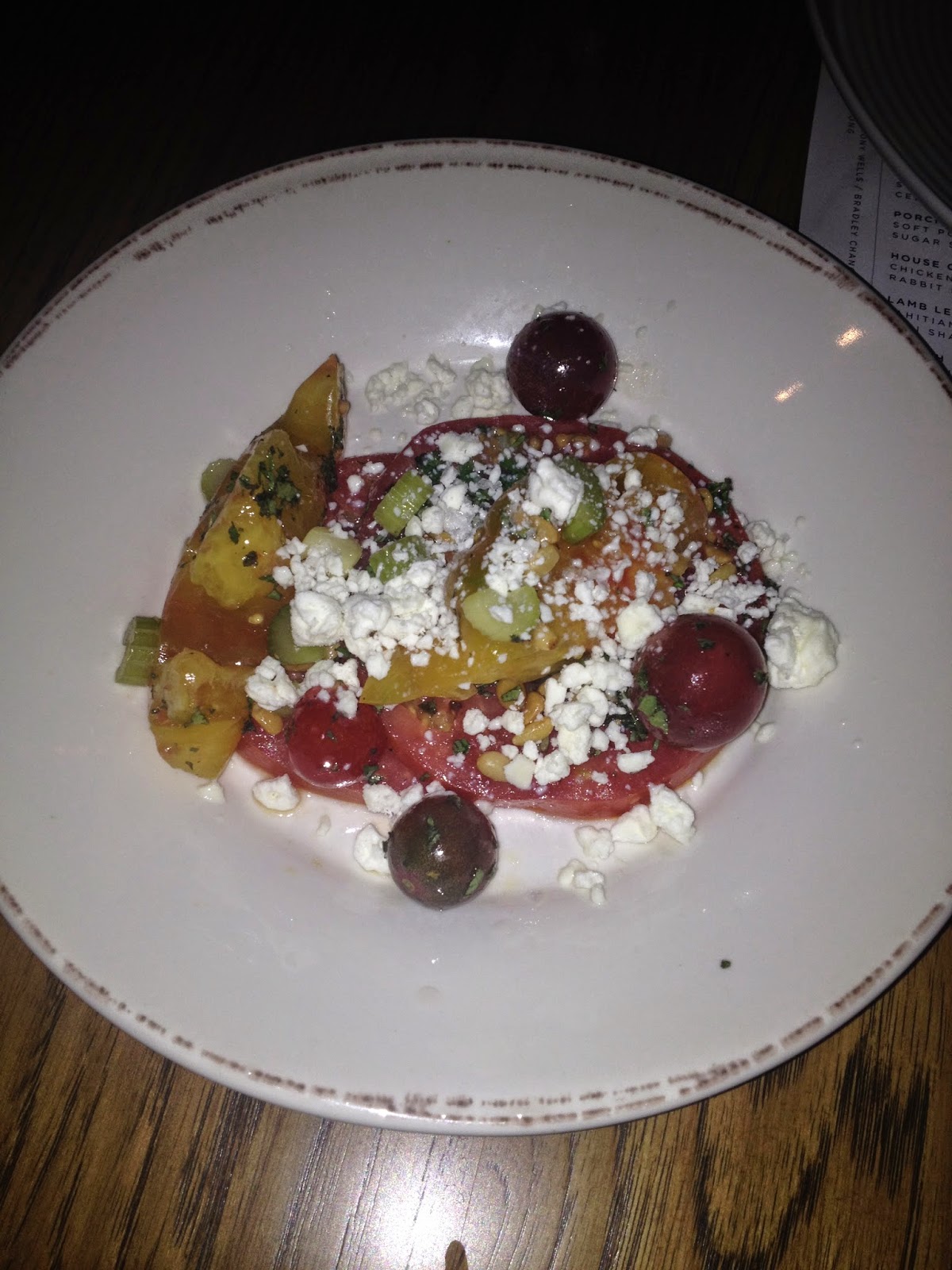 We did not order a dessert and therefore were pleasantly surprised to enjoy these cute little chocolate chip cookies as a parting gift:) 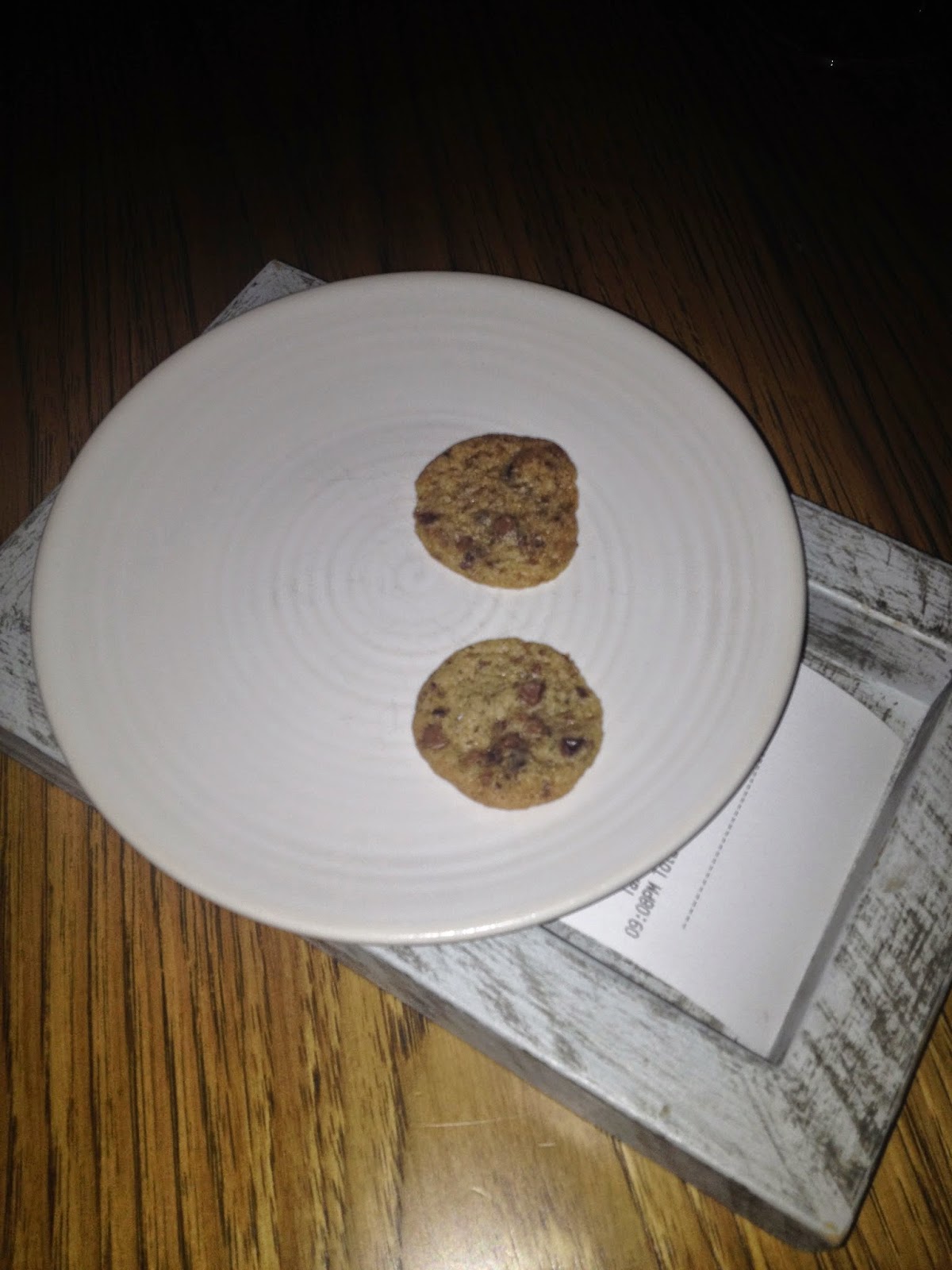 Richard Blais has created a pretty great thing for himself at Juniper and Ivy and is obviously doing very well with it.   The risk he took in building such a massive space is no doubt paying off in spades.  Fortunately, Blais and his team manage to keep the food quality at the highest level and living up to his Top Chef reputation.

And I have a feeling that, for Chef Blais, we have only the beginning of what will be a very productive culinary career.

Posted by Little Miss Locavore at 23:52