Healthy drinks and eats at Exile

Locavore approved?  Most definitely!  Our very kind waiter told us that Exile partners with local farms from whom they purchase the vast majority of their produce and eggs.  In addition, they actually forage for mushrooms and herbs themselves (very impressive!).  All of the dishes that we enjoyed contained seasonal ingredients and their menu items are constantly being tweaked to incorporate the fresh ingredients they have on hand.  Their dedication to the locavore movement is admirable. 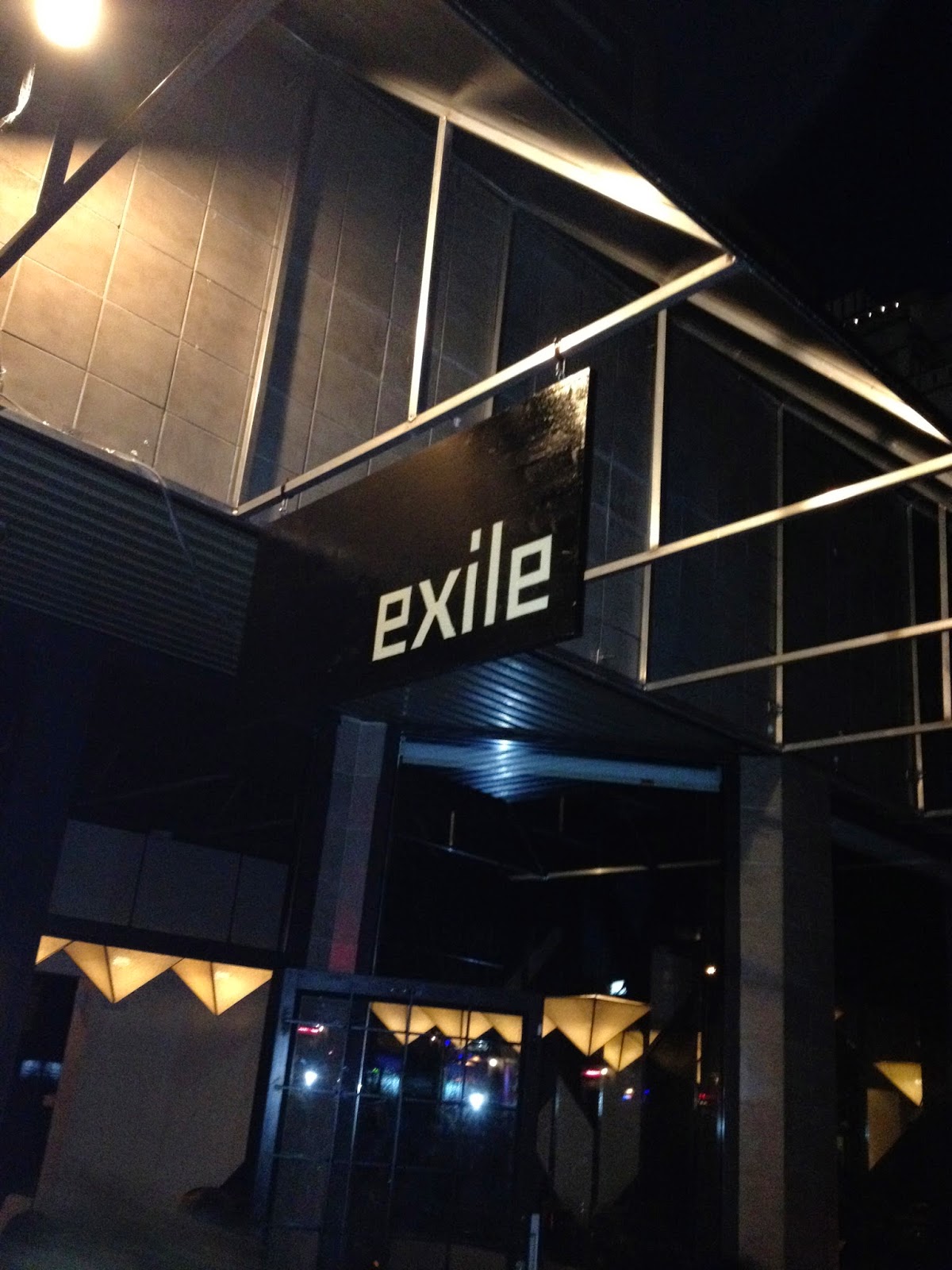 Exile is a new, intriguing bistro located in a convenient location at Bute and Davie. It came to my attention by way of Scout Magazine (my very favourite foodie resource) and, on paper, it appealed to me for numerous reasons.  First of all, it has a plant-based menu, focusing on local, sustainable produce (what's not to love about that?).  Secondly, the owner and the chef had quite impressive resumes, having worked for many years in a sampling of renowned Vancouver restaurants.  Lastly, I am on a real small plates kick these days and sharing plates are what the evening menu at Exile is all about.

When I read the Scout Magazine article back in March just as Exile was getting off the ground, the plan was that they were going to be an artisan cafe during the day, serving coffee and healthy baked goods, and then transform into a bistro at night.  We were told by our server, however, that they had recently decided to focus on their evening service so they are now just opened from 5pm onwards as well as brunch on the weekend.  She did mention the possibility of starting up the daytime cafe again once their weekend service gets established.

Exile is a very small restaurant and was about half full when we arrived just before 9:30pm.  There are seats at the bar (I would have loved to snag the seats in front of the open kitchen), as well as tables to the left of the bar.  The decor is minimalist and hip, and is notably very similar to Acorn (apparently the same designer is responsible for both).  I liked the dark wood with triangular mirrors on the main wall and thought it made the space feel a bit bigger.  A word of caution when going on a warm night- there is obviously no air conditioning so it can get pretty steamy in there!  Fortunately, there is a table or two outside if you need relief. 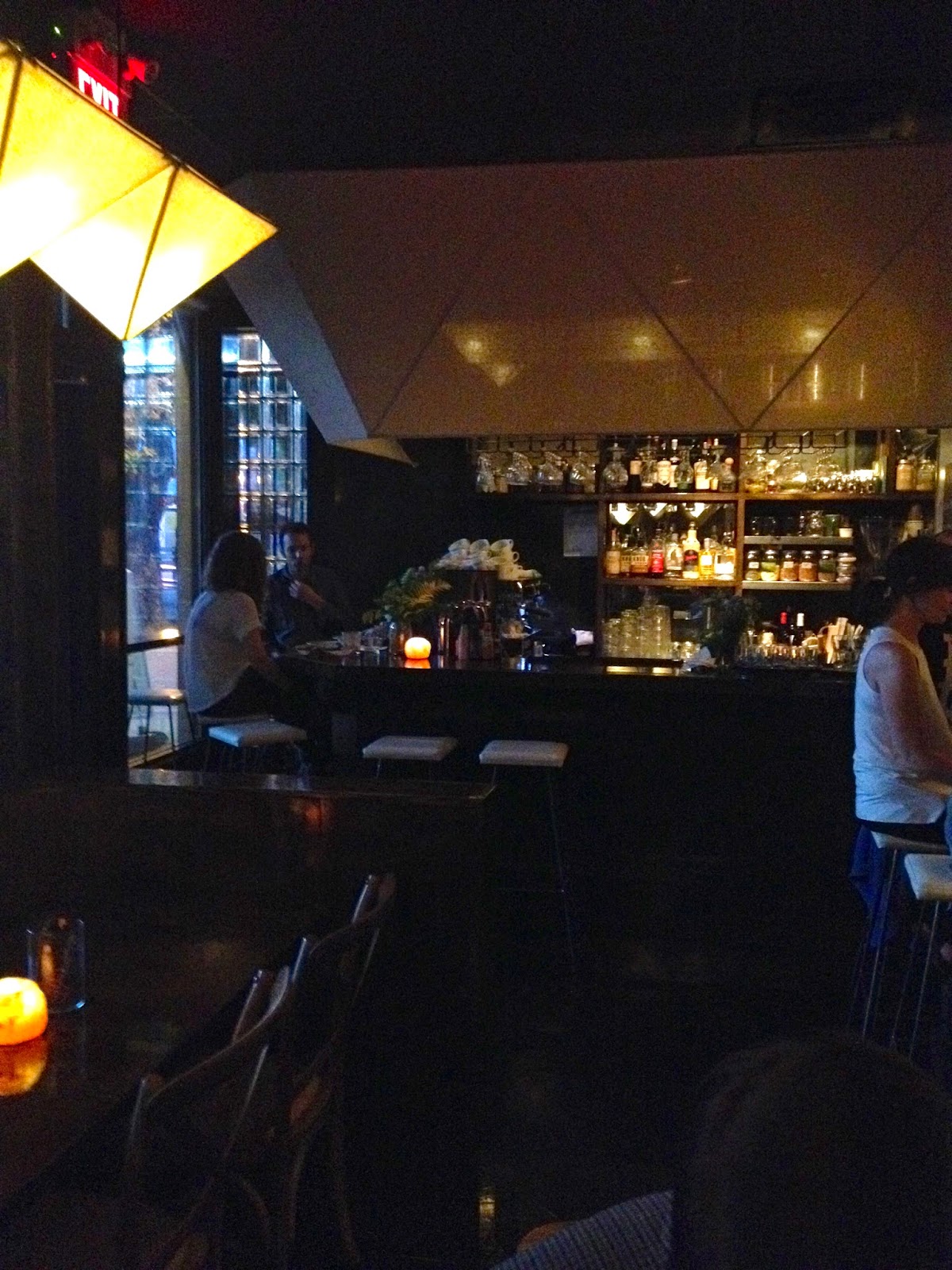 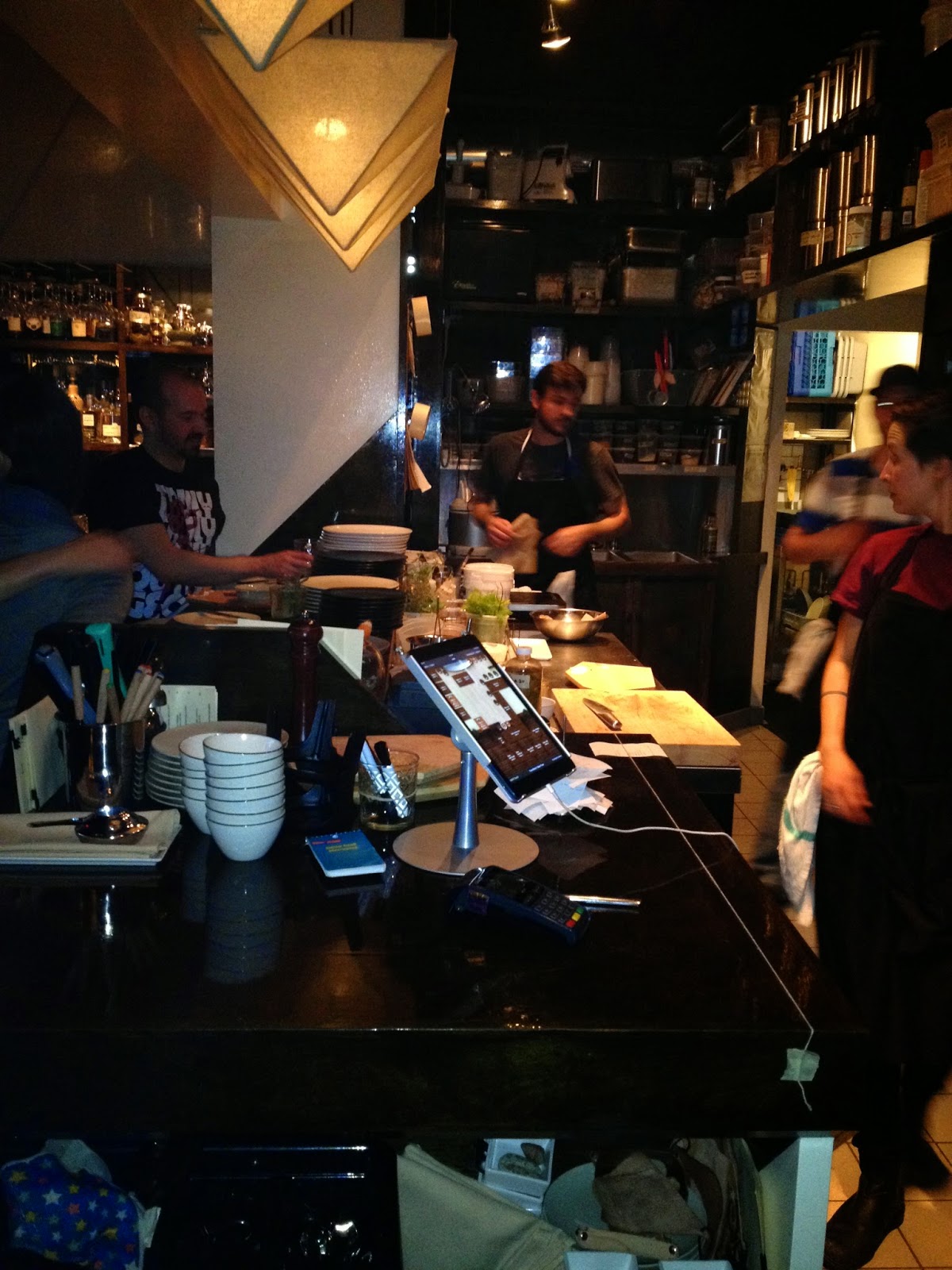 For such a new restaurant, the service was spot on.  Our main waiter was very personable and did a great job at explaining the many components of the dishes.  Although this place obviously focuses on healthy, plant-based eating, they were not "in-your-face" or preachy about it.  They just genuinely wanted you to enjoy this way of eating.  Hubby also appreciated the speedy service.  Our small plates starting arriving one by one to our table within minutes of ordering.

I was quite excited to try a cocktail considering that the owner, Vanessa Bourget, is an Herbalist and specializes in making holistic cocktails.  The cocktail special of the night caught my eye right away- vodka, with organic cane sugar and rhubarb.  The cocktail ended up being one of the highlights of the evening.  It was a perfect balance of sweet and sour, and very refreshing. 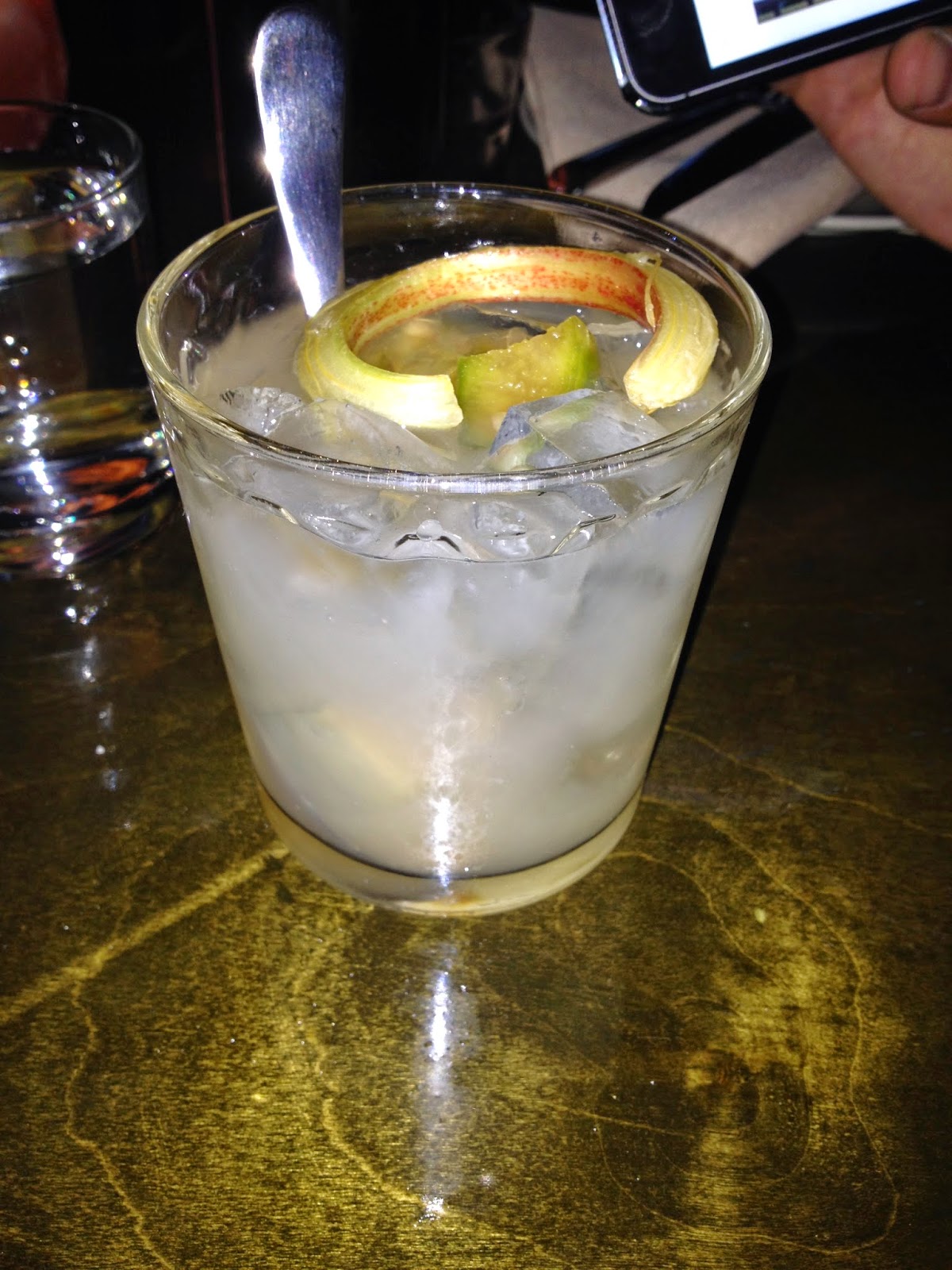 As mentioned, the menu is constantly evolving depending on what the chef is able to get that day.  The printed menu that we were given was pretty similar to the one online, but had a few tweaks on old dishes as well as a couple of new dishes.  The majority of the dishes are vegan, but there are several dishes that include milk/eggs and some that include game (they had ostrich and elk the night we dined there).

We chose 5 of the 13 available dishes, leaving us satisfied but certainly not full. Here are the dishes that we enjoyed:

Daily bread, infused oil and vinegar, cultured butter- Hubby just loves his carbs so this was a must.  The bread of the evening was a thin naan kicked up a notch with spring onion.  It was served with a cicely-infused oil and some creamy cultured butter.  It was quite plain, but tasty nonetheless.  It would have been nice to have some more bread as the ratio of butter and oil to bread was skewed such that we were left with a ton of the former and no bread to go with it. 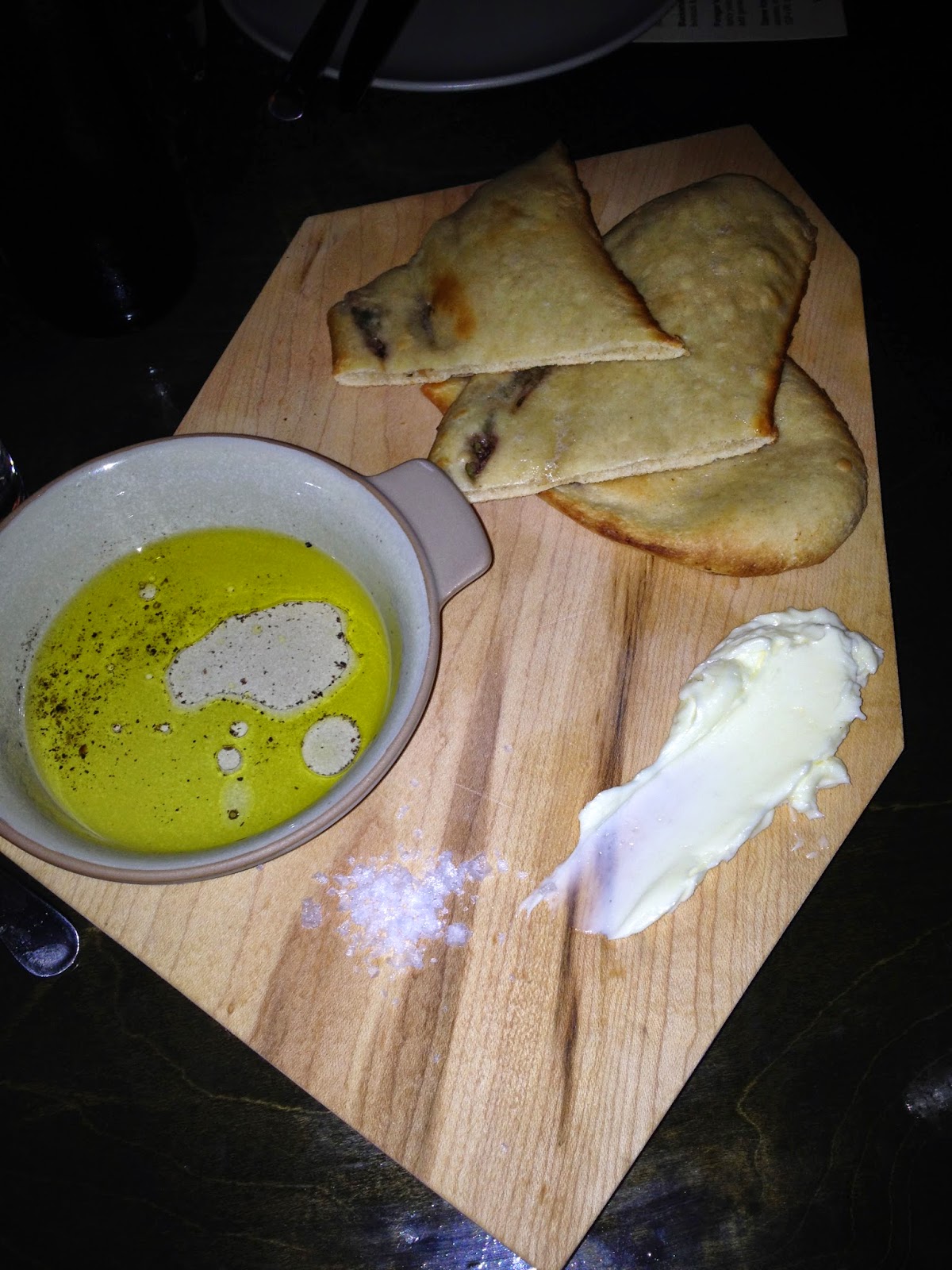 Steelhead trout tartare, radish, rhubarb, sweet cicely- This was the only seafood dish on the menu and Hubby and I quite enjoyed it.  The fish was diced and mixed with cicely and radish.  The mixture was then covered with a film of rhubarb jelly which, personally, I could have done without as I did not like the texture and found it too bitter.  All in all though, it was the best dish of the evening. 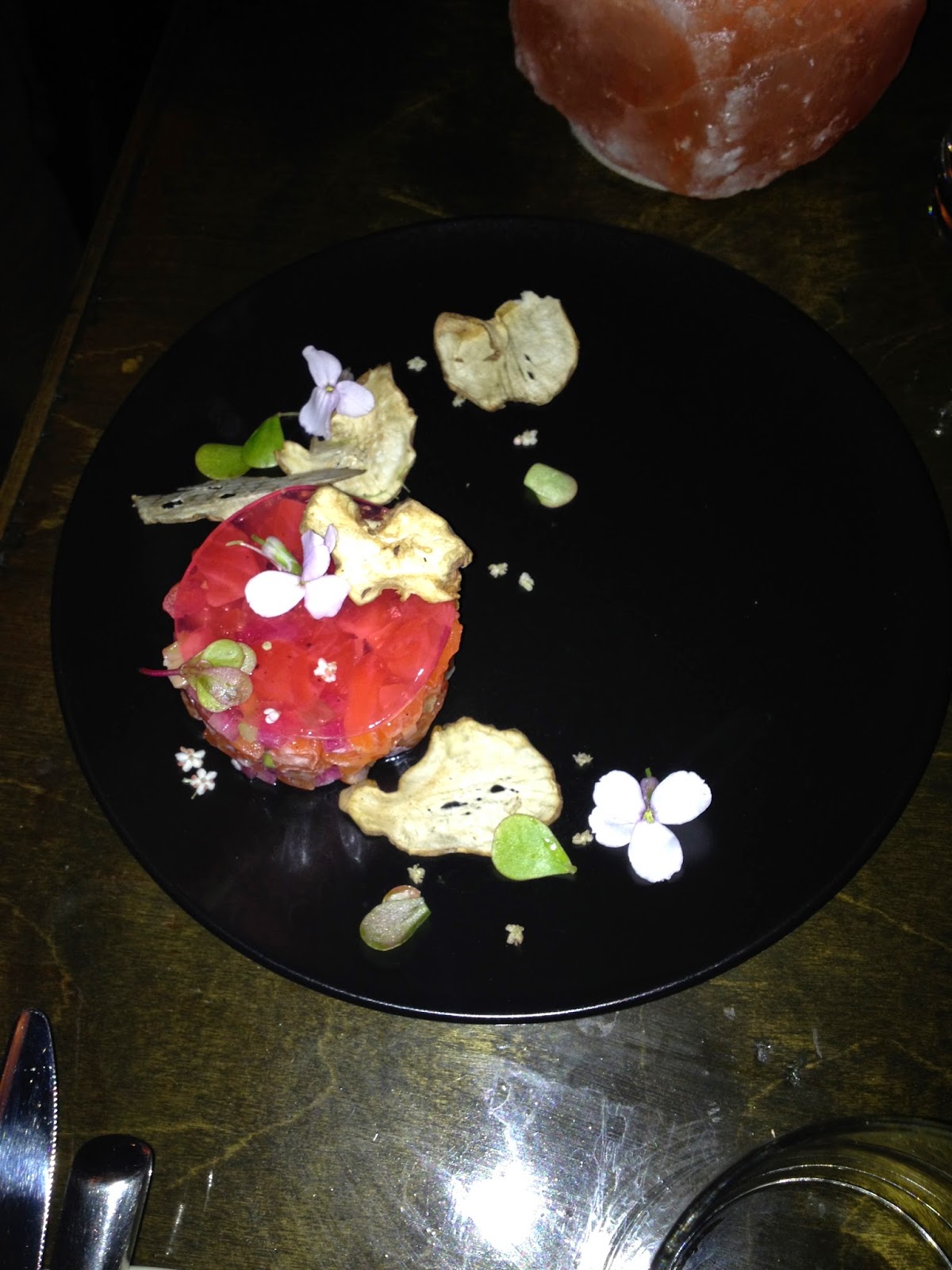 Oyster mushrooms, seed caviar, sea asparagus, spirulina- I was pretty pumped about this dish (I have a new obsession with mushrooms) and thought the presentation was playful with the mushrooms being served in oyster shells and mustard seeds being used as the "caviar".  Unfortunately, as much as I wanted to like this dish, it just did not work for me.  The mushroom itself was ok but I really did not get the spirulina-honey mixture beneath the oyster shells and could not really taste the mustard seeds or sea asparagus.  This dish left me feeling puzzled. 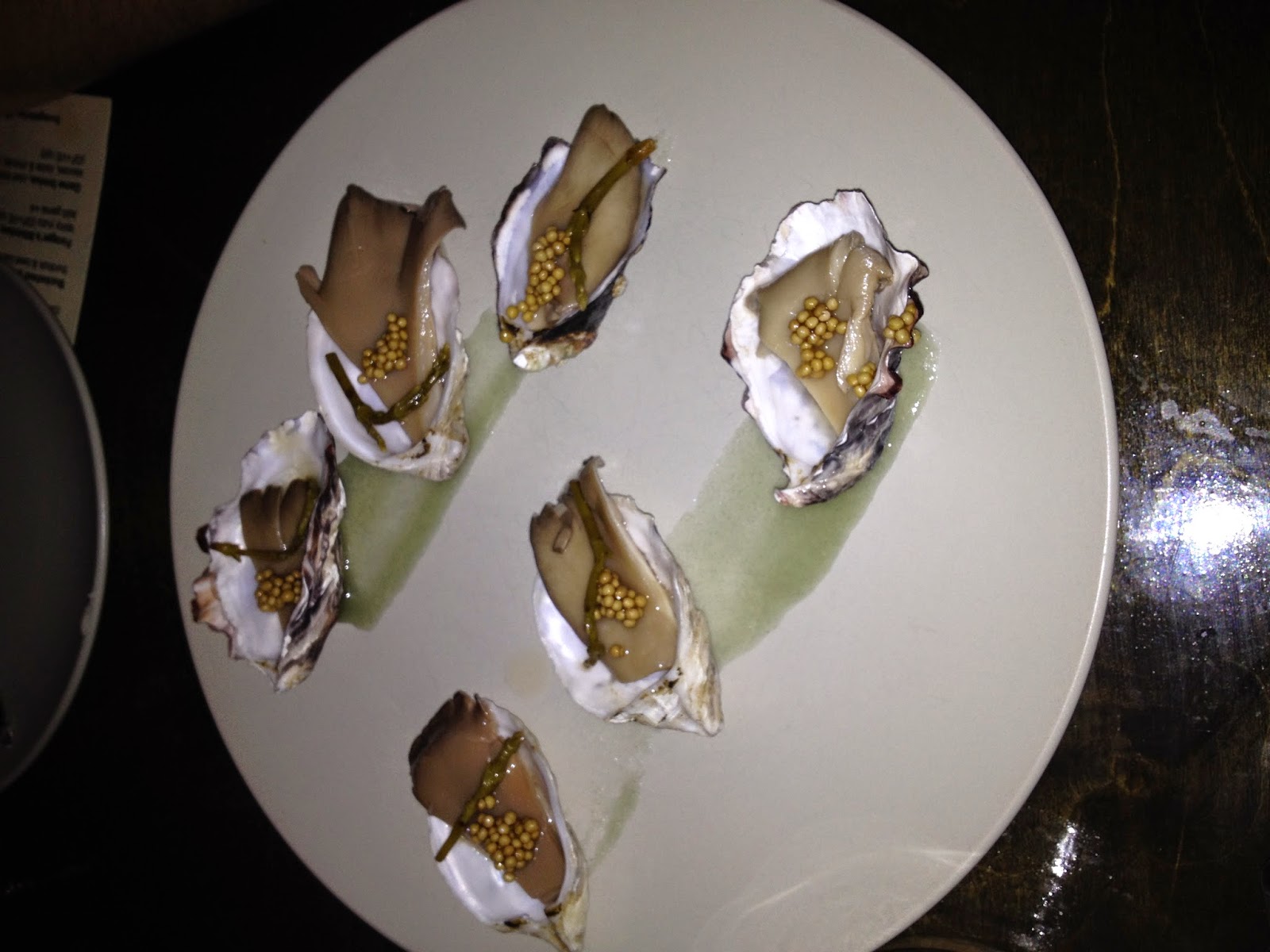 Foraged spring shoots, coconut oil and smoked salt- This was a nice mix of all kinds of different greens, including kale, onion, squash blossoms, etc.  They were served warm and nicely complemented by the coconut oil.  Although Hubby considered it a bit too "green" for his liking, he admitted that the shoots were well seasoned and in the end, did eat his share.  Greens are in season right now so I appreciated them being front and center in this dish. 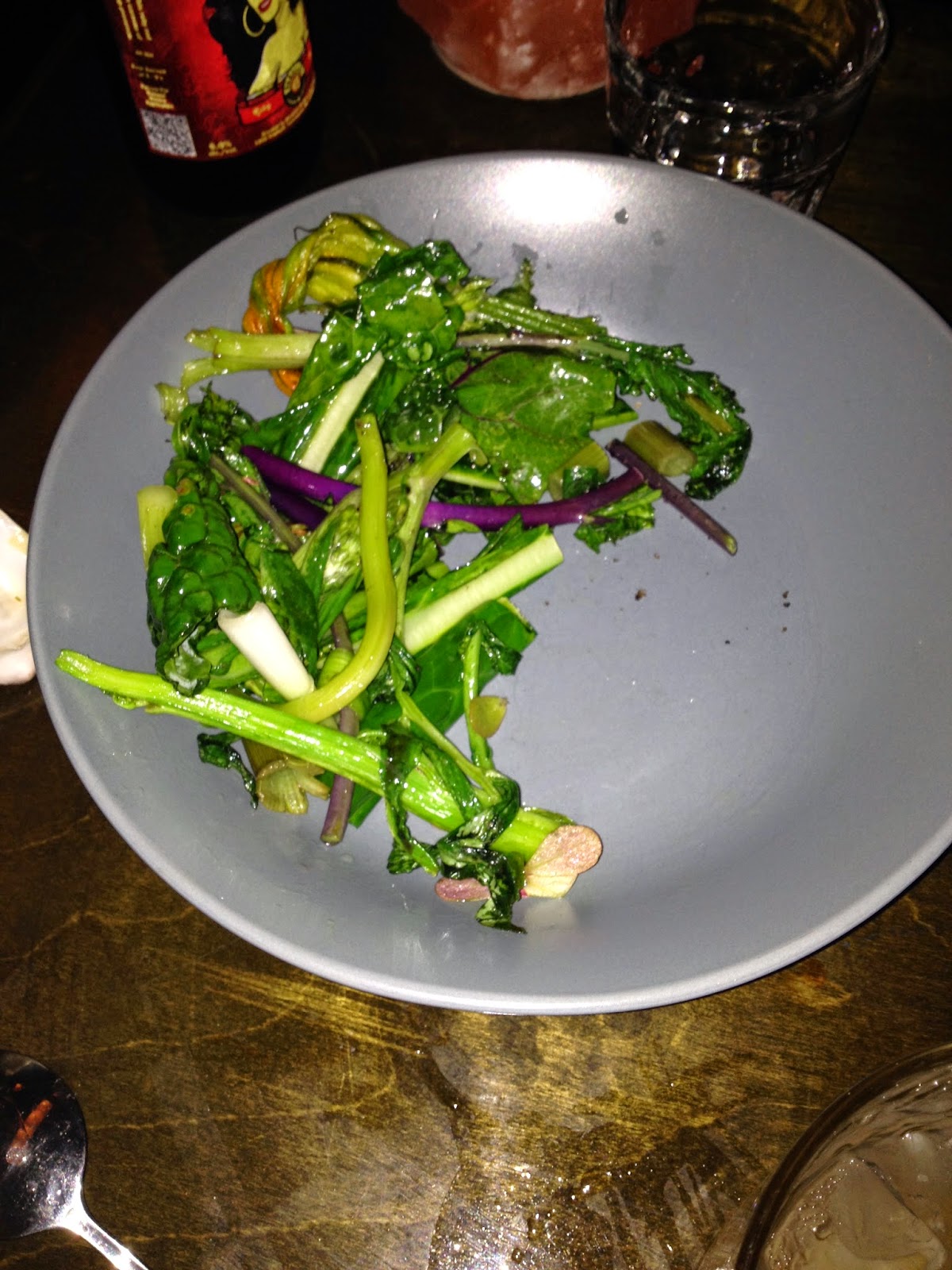 Forager's bibimbap-  This was Hubby's pick as he is a huge bibimbap fan.  He chose to add game (elk- $4) which ended up being a mistake.  The meat was chewy and rubbery which totally turned Hubby off from eating the dish.  I thought the other components of the dish were OK, including carrots, mushrooms, beets and sunflower shoots, and I liked the texture of the black rice.  Overall though, the dish was a bit bland and lacked the "punch" of flavours that you expect with bibimbap.

Overall, I think Exile has a lot going for it- a central location, enthusiastic staff, a unique holistic cocktail program and a dedication to local ingredients.  Unfortunately, on this visit, I was not particularly "wowed" by the food.  In saying that, Exile is just in its infancy and I think it has the potential to grow and get better with time.

Good luck Exile, I am rooting for ya!

Posted by Little Miss Locavore at 23:02