Locavore Approved?  YES- This is the first reason that I really wanted to like Ulla.  On their website, they state that their "local ingredients, classic flavours and focus on techniques sums up the food philosophy" and that they have "a commitment to using local organic products whenever possible we also aim to serve only ethically raised proteins".  Their menu is constantly tweaked to include dishes that showcase local produce, such as the "last of the local tomatoes" salad appetizer on the night that we visited. 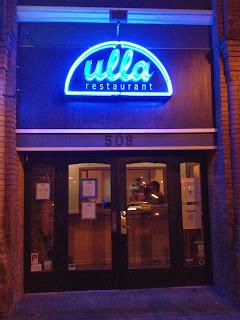 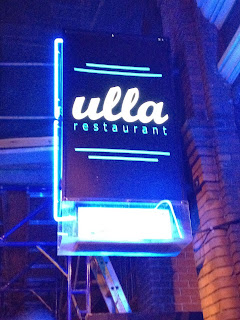 It was my last weekend working in Victoria and I wanted to end on a foodie high note.  Hubby was visiting for the weekend and I had spent quite a bit of time researching and talking with the local about where we should go.  Night #1 was already taken as a repeat visit to Brasserie L'Ecole was an absolute must (see my review here) but Night #2 was still free.  Where to go?

In the end, I chose Ulla for several reasons, including their focus on local ingredients, recommendations of my coworkers and the appeal of its online menu.  Another bonus was the fact that the chef, Brad Holmes, had trained under great mentors such as Feenie and Hawksworth, and then had worked at Cibo in Vancouver before opening Ulla.  Furthermore, Ulla has won a number of awards including En Route Best 10 New Restaurants in Canada 2011 and Vancouver Magazine's top Victoria Restaurant two years in a row.  Also Zagat 29/30, great reviews by the Vancouver Sun.  With all of these accolades, I went in with high expectations. 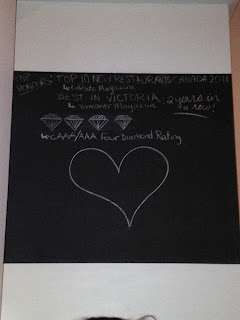 Ulla is located in Chinatown.  The area around it is not exactly pretty, and the outside of the restaurant is nothing to write home about, but the inside is quite appealing.  It is a relatively quaint space, with earth tone coloured walls, large pieces of artwork and wooden tables.  It is casual yet sophisticated.  The space was packed (I barely got a reservation when I called two days ahead) and the room was still "hopping" when we left at 11pm.  In contrast to the very classy decor of the main room, there is some very "interesting" artwork adorning the walls on the way to the washroom (I think it was a giant cartoon octopus?) which I found rather odd.  It did think it was clever of them to post their Facebook and Twitter links on the large wall in this washroom corridor. 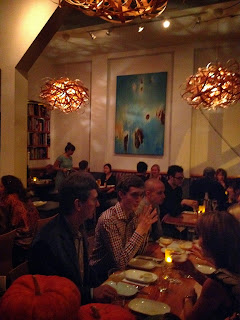 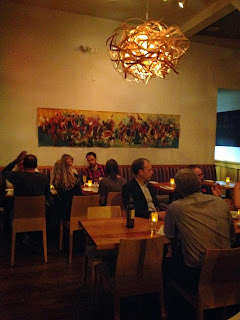 I have mixed reviews of the service.  On one hand, our server (who I believe was the co-owner) was friendly and very knowledgeable about both the food and drink menu.  She told me all about the Vieux Pin winery where my wine was from, and also recommended other wines from this vineyard.  On the other hand, the pace of service was very slow, with a lag tome of 20 minutes between ordering and our appies arriving, and then another long wait before our mains (almost 30 minutes).

In terms of their drink menu, they have a very small cocktail list but do have a decent selection of beers, most of which hail from the Pacific Northwest.  Their wine list has a limited number of unique, local options.  I must commend them for bottling their own water, both still and sparkling, and sharing the profits with the Lifecycles Project Society (for more info on this great community initiative, see here).

Now onto the food.  The menu is nice and concise, and individual dishes may change daily depending on what is in season.  The current menu posted on the website is quite different then the menu when we were there 3 weeks ago, with very few dishes that are exactly the same.  Love it!

Our meal started off with complimentary bread and olive oil.  It was nothing to write home about but the gesture is always appreciated. 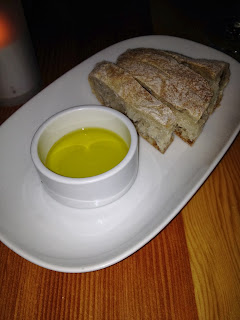 Wild mushrooms, 64 degree hen egg, cauliflower, bread, sherry- This appie caught my eye as soon as I saw it on the online menu.  I just adore mushrooms that I even turned down the "last of the local tomato salad" so I could order it!  Unfortunately, it did not live up to my high expectations. The colours on the plate did turn me off slightly as there was a lot of earth tones going on. Between the mushrooms, the brown sauce, the beige puree and the off-white cauliflower, the plate looked pretty "blah".  Fortunately, the runny egg did give it some colour after cutting into it.


Wild mushrooms, 64 degree hen egg, cauliflower, bread, sherry- This appie caught my eye as soon as I saw it on the online menu.  I just adore mushrooms that I even turned down the "last of the local tomato salad" so I could order it!  Unfortunately, it did not live up to my high expectations. The colours on the plate did turn me off slightly as there was a lot of earth tones going on. Between the mushrooms, the brown sauce, the beige puree and the off-white cauliflower, the plate looked pretty "blah".  Fortunately, the runny egg did give it some colour after cutting into it.

In terms of flavours, there was nothing repulsive in the dish but was a bit too "aggressively seasoned" (aka salty).  Also, there was too much going on in the way of sauce and puree, making the dish confused and far too heavy for an appie.  I would have preferred that the mushrooms be left in their original form rather than being minced (they kinda looked like unappealing dark chicken meat). All in all, a bit of a miss for me. 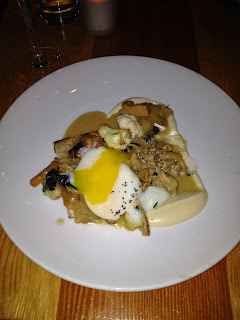 Scallop boudin blanc, potato, squash, pumpkin seeds, sunflower sprouts- There were high and low points to this dish.  High point- plump, well seared scallops.  Low point- too much clutter on the plate!  Between the various purees, the potato and the squash, there were too many soft-textured items on the plate.  Any one of them alone with the scallops would have made this a much more cohesive dish. 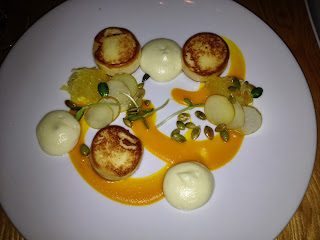 Falafel, tempeh, grains, fermented turnips, vegetables, cashew cheese, yogurt- I think the name explains it all- there was just way too much going on in this dish!  Although this was a vegetarian dish, it was extremely heavy with its many rich ingredients.  One really does not need falafel, tempeh and wheatberries all on one plate!  And again, I just did not yet the many purees in addition to the creamy cashew "cheese".  I really wish they had just served me the veg (especially the fermented turnips) and the falafel which were delicious. Although the dish left me a bit confused, I do complement them for offering such a creative vegan dish which is quite a rare find in this style of restaurant. 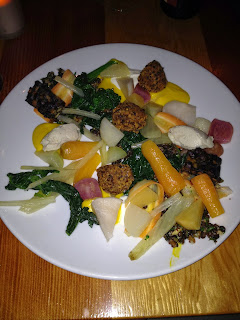 Pork three ways, potato and cheddar perogies, cabbage, chive, bourbon maple sauce- The "pork three ways" seems to be a mainstay on the menu with sides that change based on seasonality.  It included pork tenderloin, honey garlic sausage and laquered bacon.  Although there were again way too many bells and whistles on the plate (purees, sauce, a mishmash of veggies and disappointing "perogies" that were more reminiscent of Chinese dumplings), Hubby will admit that the whole dish was saved by that laquered bacon.  He is still talking about it! 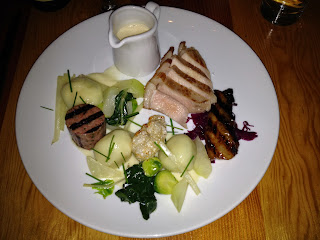 As you may have guessed by reading the above, I was not exactly impressed by Ulla.  While I do really appreciate their dedication to local produce and their creativity, I left feeling confused.  On every plate, there was 1 or 2 really good elements which unfortunately got lost in a sea of sauces, purees and other unnecessary items.  If the folks at Ulla could reign in the complexity and focus on simply good food, I think they would really have something great going on.  For now though, this place is just a bit much for my liking.

Posted by Little Miss Locavore at 00:21