Locavore Approved?  YES- Our kind server told us that the Executive Chef here, Chef Marc-Andre Choquette sources many of his ingredients from 2 organic farms located just outside of the city.  He is said to have a "green thumb" of his own and would like to start an urban farm of his own to grow some of his own ingredients.  The menu, which, being a rotisserie, is meat-heavy (all ethically-raised), but I was there are also a very good selection of Oceanwise seafood and local produce, both as sides and in main dishes.  I really lucked out on coincidentally choosing to go on Monday night which was Meatless Monday (an international initiative to encourage so there feature "roast" of the evening was vegetarian, and made with all all local produce from their partnering farms.  I appreciated their daily feature menu that changes daily based on availability of ingredients.  I never really expected all that much in terms of locavorism at the outset, but ended up being pleasantly surprised!

***To learn more about Meatless Monday, an international project with a Canadian branch that has roots right here in Vancouver, please click here. 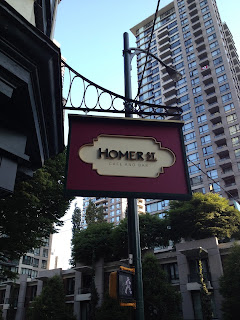 A group of my work colleagues and I needed to have a meeting, and what better way to do it than over dinner?   So I hauled out my "to-go" list of restaurants and as I worked my way down the (very long) list, Homer St. Cafe and Grill caught my eye.  This new restaurant led by the culinary team from Tableau Bar Bistro in Coal Harbour, had the qualities that I was looking for- a casual atmosphere in the heart of downtown, with approachable food at reasonable prices.  Just the ticket!

We planned the dinner for a Monday night at 7:15.  I made an online reservation but, as with many restaurants on Mondays, this was not really necessary as there were only a handful of tables occupied.  Interestingly though, the place really filled up around  9pm with guests enjoying not only drinks, but full dinners.  The relaxed atmosphere and central location make this a great Yaletown gathering place.

Homer St. Grill sits right at the corner of Smithe and Homer.  On entering, you will see a row of tables to your left and the kitchen/bar to your right.  Behind the bar, you will also note a rotisserie oven filled with whole chickens and other goodies soaking up all of that roasted goodness.  I would liken the atmosphere to a bistro/diner hybrid.  It is quite casual, but, true to Yaletown, also has an upscale feel to it. 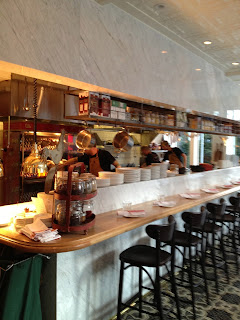 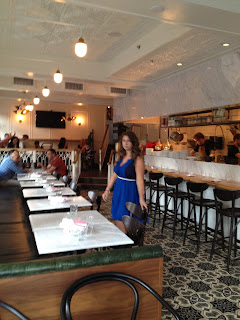 Service was a bit of a mixed bag.  Our server for the evening was very chatty (in a good way) and was knowledgeable in answering my questions about where they sourced their ingredients from.   She was also attentive to our needs and did not make us feel rushed when we arrived and wanted to catch up a bit before ordering.  Unfortunately, there were a few hiccups in our service such as one of my colleagues finding a piece of chewed gum wrapped up in his cloth napkin and then later finding a fly in his water.  Also, there was quite a delay between receiving our shared "snack" and the rest of our meal, and then again quite a wait before dessert.  Perhaps they were a bit understaffed for a Monday night?

In terms of food and drink, there is a drink menu that includes both alcoholic and non-alcoholic options and two food menus, one standard menu and a feature menu that changes daily.  Although I really appreciate the concept of a daily menus, I was a bit disappointed that they had run out of almost all of the daily specials by the time we got there at 7:15.  Fortunately, the dish that I wanted was one of the only dishes still remaining!  On a more positive note, I was happy (and surprised!) to see that most entrees were around the $20 mark.  Their signature item, the rotisserie chicken, was really a steal at $32 for a whole bird to share, fresh off the spit!We got out for only $40/person including alcohol, one dessert and tax/tip.  That is a rare occurrence in Yaletown!

We started with drinks, with two of us choosing to imbibe in an alcoholic variety (why not, it is Monday after all!) while my other two colleagues chose a non-alcoholic drink.  I was at first tempted to get a wine from their commendably extensive selection of wines (complete with a good number of BC wines) but in the end, I chose the Spring Flowers, made with whisky, limoncello, lavender-infused honey, dandelion bitters, lemon.  This was a bit of a stretch for me as whisky is something that I usually shy away from, but the rest of the components sounded so good that I just had to go for it.  And I am glad I did.  The perfectly balanced cocktail was light and refreshing, and I particularly enjoyed the hint of lavender that hit my palate at the last moment.  There are only 8 cocktails on the menu (4 house creations, 4 classic) and I would be very interested to see what else they have up their sleeves.  My other colleague who opted for a little dose of alcohol chose a beer from their short, but well planned, list of options (draft and bottled options available), while the others chose a non-alcoholic version of my cocktail that was found on a separate drink list that our server brought when they specifically requested a non-alcohlic cocktail (not sure why it is not just included on the master drink list).  They loved the flavours as much as I did and were glad to have found such a great non-alcoholic cocktail option (a rare find these days). 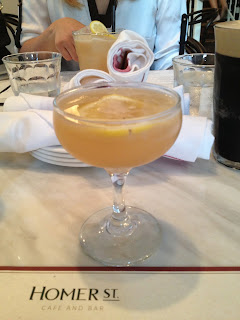 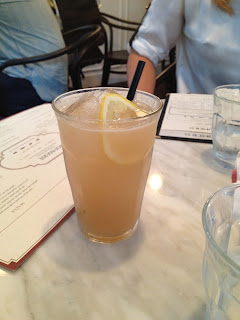 Now for the food:

Fried Chickpea Dip with Crostini- After a long day at work, we all had the munchies and needed a little pre-meal snack.  Lucky for us, the menu included "Snack" section, which are the perfect little nibbles for before dinner or with a drink at the bar.  We chose this dip, which was, simply put, hummus with a few whole fried chickpeas in it.  Having said that, the hummus had great flavour and I enjoyed the crunch of the whole chickpeas.  There was a bit of false advertising at play here, as the "crostini" as described in the title were actually an assortment of fried plantains and root vegetable chips.  In this case, false advertising was a good thing, as the chips were much more unique and more flavourful than any crostini could have been.  We also appreciated that they delivered more of these yummy chips for free when we ran out.  A nice menu-pondering snack and quite a good deal for $6. 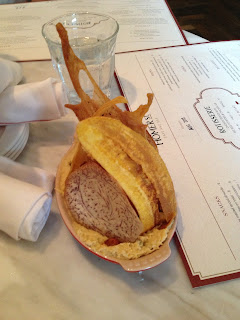 Green Leaf Salad, Cucumber, Tomato, Cider Honey Vinaigrette- We chose to share an appetizer between the four of us and this salad fit the bill perfectly.  This very generously portioned and visually appealing appetizer salad was overflowing with a bounty of seasonal veggies, many of which I had bought for myself at the  Farmer's Market the day before.  The cider-honey vinaigrette was very light and its balance of sweetness and acidity complimented the tomatoes perfectly. 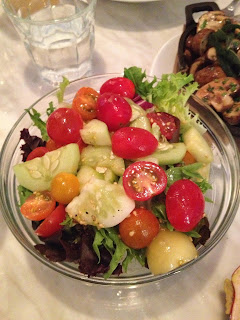 Risotto (Feature "Roast")- This ended up being the popular choice at our table, with myself and two of my colleagues choosing it as our mains.  As mentioned previously, Homer St. Cafe has a daily "roast", which on most days, involved a type of meat cooked in the rotisserie.  Because it was "Meatless Monday", they daily "roast" was actually local zucchini that had been prepared in the rotisserie and then served over a lemon and herb risotto.  The risotto was beautifully cooked with nice, light summer flavour and I enjoyed it very much.  My only "beef" about this dish was that I wish that the zucchini had been made the star component of the dish and that there had been more of it.  The rotisserie flavour on this "peak-of-its-season, organic vegetable were amazing and could have easily held up on its own as the king of this main. 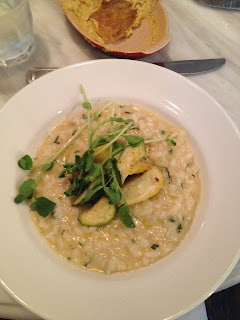 Citrus Baked Steelhead Trout, Red Cabbage, Brown Rice, Dill (sorry, the pic did not turn out)- When I was doing my usual menu perusing online the night before our meal, I had my mind set on ordering this dish.  This was before the risotto curve ball that got thrown at me when I arrived (I am a such a sucker for risotto!).  My only colleague that did not join me in ordering the risotto ended up ordering it in my place and quite enjoyed it.  It was a noticeably smaller portion than our risotto, and if you were hungry, it would likely not be substantial enough without having had an appetizer or a few sides.  In terms of taste, it did work well and its simple, pretty plating was very pleasant for summer.  The fish, although quite a small portion, was cooked perfectly and was the obvious focal point of the dish.

Sauteed Crimini Mushrooms with Fried Sage-  There is a separate "sides" part of the menu and guests can choose sides of their choice to share around the table.  Although I am not usually a big fan of this arrangement as it ends up increasing the cost quite a bit for a veggie lover like me, I must admit that it does make sense at a rotisserie restaurant where you purchase the chicken as an individual item and then build up from there.  Although we did not get the chicken, we still wanted to sample some of these yummy-tasting sides.
This mushroom dish was a very successful side that would pair nicely with pretty much any dish.  The texture of the creminis was hearty and meaty (a great compliment to a vegetarian dish like our risotto) and the flavours were pleasant yet mild so as not to overwhelm the flavours of our mains.  The portion was generous, and perfect for sharing, but I could have easily eaten the whole thing (or 2 or 3) to myself.  Highly recommended! 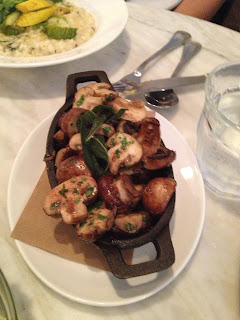 Chocolate Pudding, Maldon Salt, Cocao Nibs, Honeycomb- I always enjoy going out for dinner with the colleague of mine who ordered this dessert, both because she is my good friend and because I can always count on her to order a dessert that I can add to my blog post.  And what's more is that she always shares:)  The pudding delivered a nice shot of chocolate without being too rich.  The salt, which is all the rage right now with chocolate, was subtle yet just enough to make it interesting.  I enjoyed the crunch for the cocoa nibs. 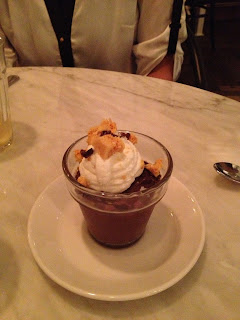 In my opinion, Homer St. Cafe and Bar is a great addition to the Yaletown restaurant scene.  With its unique focus on rotisserie foods, including chicken and lots more, as well as the chef's passion for local ingredients, I think that we have only seen the beginning of what they have to offer.

Posted by Little Miss Locavore at 23:09