Here is the latter part of a two-part blog post on our experiences at Noma over the past year (click here to see part one about our visit to Noma Copenhagen).  Detailing them back to back really puts Redzepi and his team's talent into perspective, and the .  It is hard to believe that the same chef conceptualized these two tasting menus, with vastly different ingredients, cooking techniques and presentations.  For his food at Noma Mexico, Redzepi and his team learned about the bounty of Mexico from the locals (farmers, foragers, chefs and of course, tortilla makers), then created his menu using a mix of traditional and novel techniques to create a jaw-dropping 15 course meal as you will see below.

Noma Mexico is Noma's 3rd pop-up restaurant, and the first to open after the closing of the original Noma in Copenhagen.  His other two pop-ups in Sydney and Tokyo were huge successes so it is not surprising he went for a 3rd.  The location in Tulum was a bit more of a gamble in terms of remoteness of location, but nonetheless, it easily sold out within a few hours.  It goes to speak to the following that Rene Redzepi has garnered all around the globe.

Atmosphere: Noma Mexico was literally located in the middle of the jungle, with an open air dining room and kitchen.  Aside from a small Noma sign and a few casually dressed hostesses, you would never know that one of the best restaurant's in the world had set up shop.  Upon entering, guests walk through sand (high heels ere discouraged!) past a small bar and back to the "dining room" with wooden tables with a backdrop of jungle foliage.  The kitchen was located right at the back, notable for a large Mexican-inspired oven on display for all to see, and then a closed kitchen where Redzepi's staff was plugging away under his direction (from our table, we could hear every word!). 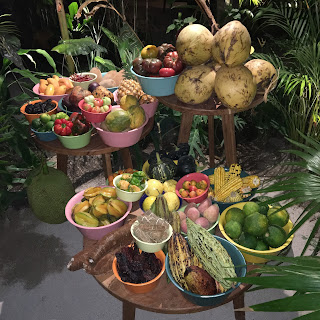 Service: Redzepi brought his Noma staff with him from Copenhagen and we recognized quite a few familiar faces from our meal at Noma Copenhagen.  In addition to the Noma staff, Redzepi enlisted the help of some locals, most notably some Mexican women in traditional dress in the kitchen making tortillas.  The quality of service was similar to that in Copenhagen with a few excusable slip-ups (we were delivered the first dish twice in error) which was understandable since we dined with them during their first week of service. In general, the staff seemed like they were having a lot of fun in their new surroundings, feeding into the more relaxed and low-key vibe at Noma Mexico.

Food/drink: Tickets to Noma Mexico included a 15 course tasting menu (constantly evolving) plus beverage pairings.   The beverage pairings consisted of a mix of alcoholic drinks, including a mix of beer, wine and spirits, and some non-alcoholic juices that all paired beautifully with the dishes.  After our meal, we were escorted over to the bar where we were offered another 3 options for cocktails, specially crafted for the evening.
The 15-course tasting menu was remarkably different than our Noma dinner in Copenhagen, as it was completely grounded in ingredients from the region.  I was treated to ingredients, spices and flavours that I had never before encountered.  It seems pretty risky to create a menu with unfamiliar ingredients, but Redzepi nailed every single dish.  I felt excited and intrigued from start to finish, and by the end had even more respect for Redzepi and his staff's enormous talent.

Here is a look at the dishes Hubby and I enjoyed: 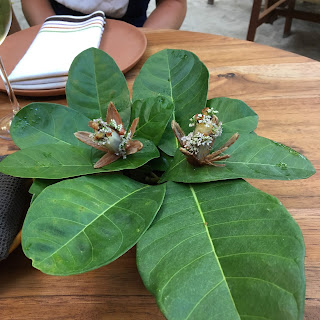 Melon clam from the Sea of Cortez 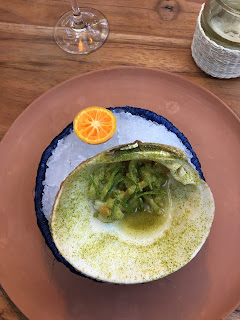 Salute with dried tomatoes and chapulines 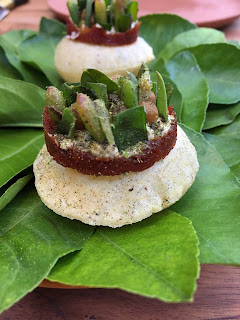 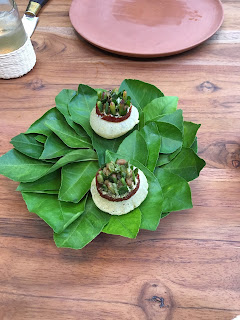 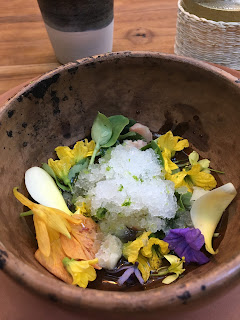 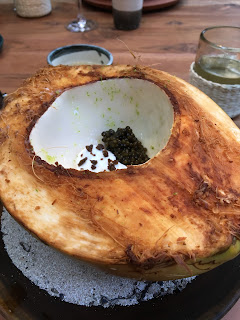 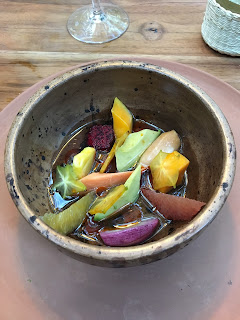 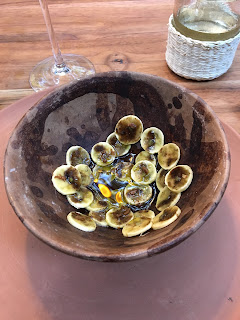 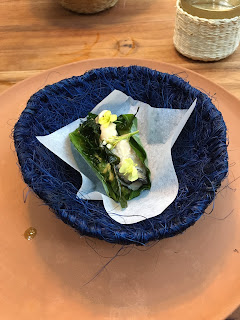 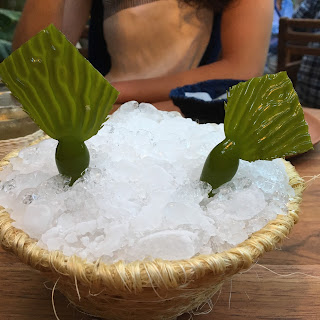 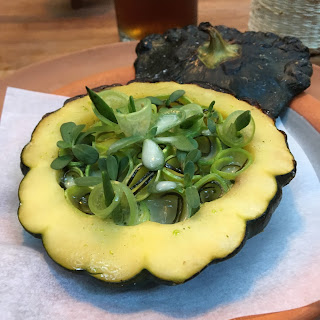 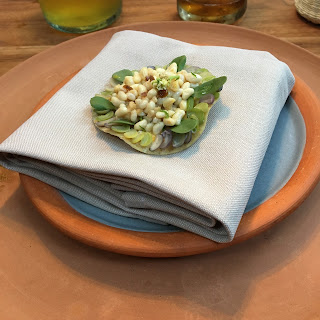 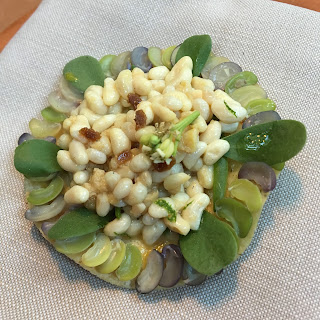 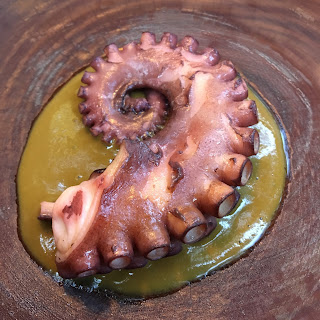 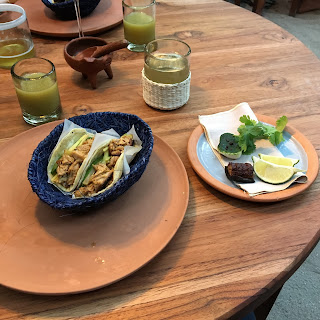 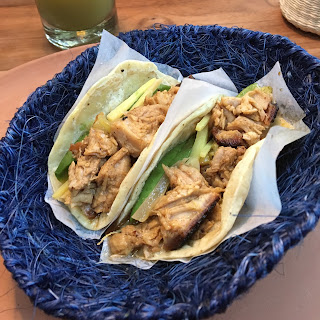 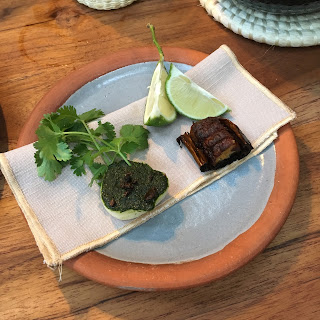 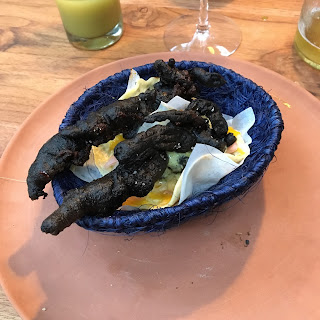 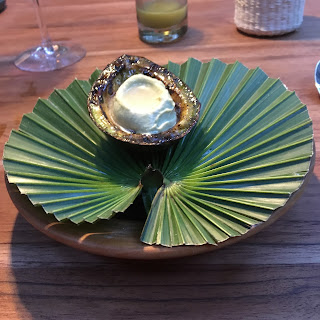 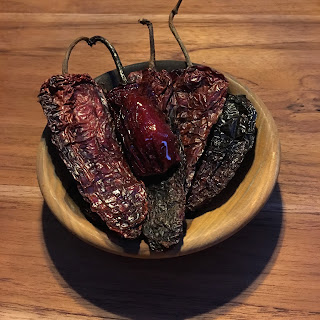 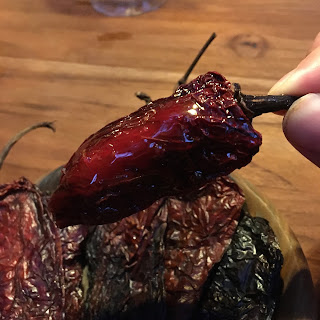 Overall impression:
This dinner was one of my most memorable I have had to date .  The surroundings were spectacular (how often do you eat a Michelin star meal in the jungle?) and the ingredients and flavours were so different from anything that I had experienced before.  The fact that Redzepi and his team could prepare dishes to such a high level with ingredients that they had discovered only weeks before is truly astounding.
Having now dined twice with Redzepi and crew, I must admit that I am now "hooked" and am itching to see what that brilliant mind of his will come up with next.

Posted by Little Miss Locavore at 22:43