The Fat Badger- British Pub Fare with a Vancouver Twist

Locavore Approved?  YES- Any restaurant that changes their menu up EVERY NIGHT is usually pretty serious about using local, seasonal ingredients and Fat Badger is no exception.  Although pubs are not generally well known for their dedication to the locavore movement, the folks at The Fat Badger source their goods from local suppliers and create new dishes every night depending on what is seasonal.  The day that we went, their Twitter page broadcasted the arrival of wild mushrooms that would make their way onto plates at The Fat Badger and the always-wonderful Espana (Neil Taylor is Chef/Owner of both).  Their very extensive beer selection also boasts a healthy proportion of local brews in addition to the London classics.  Goes to show that "gastropub" and "locavore" can be used in the same sentence! 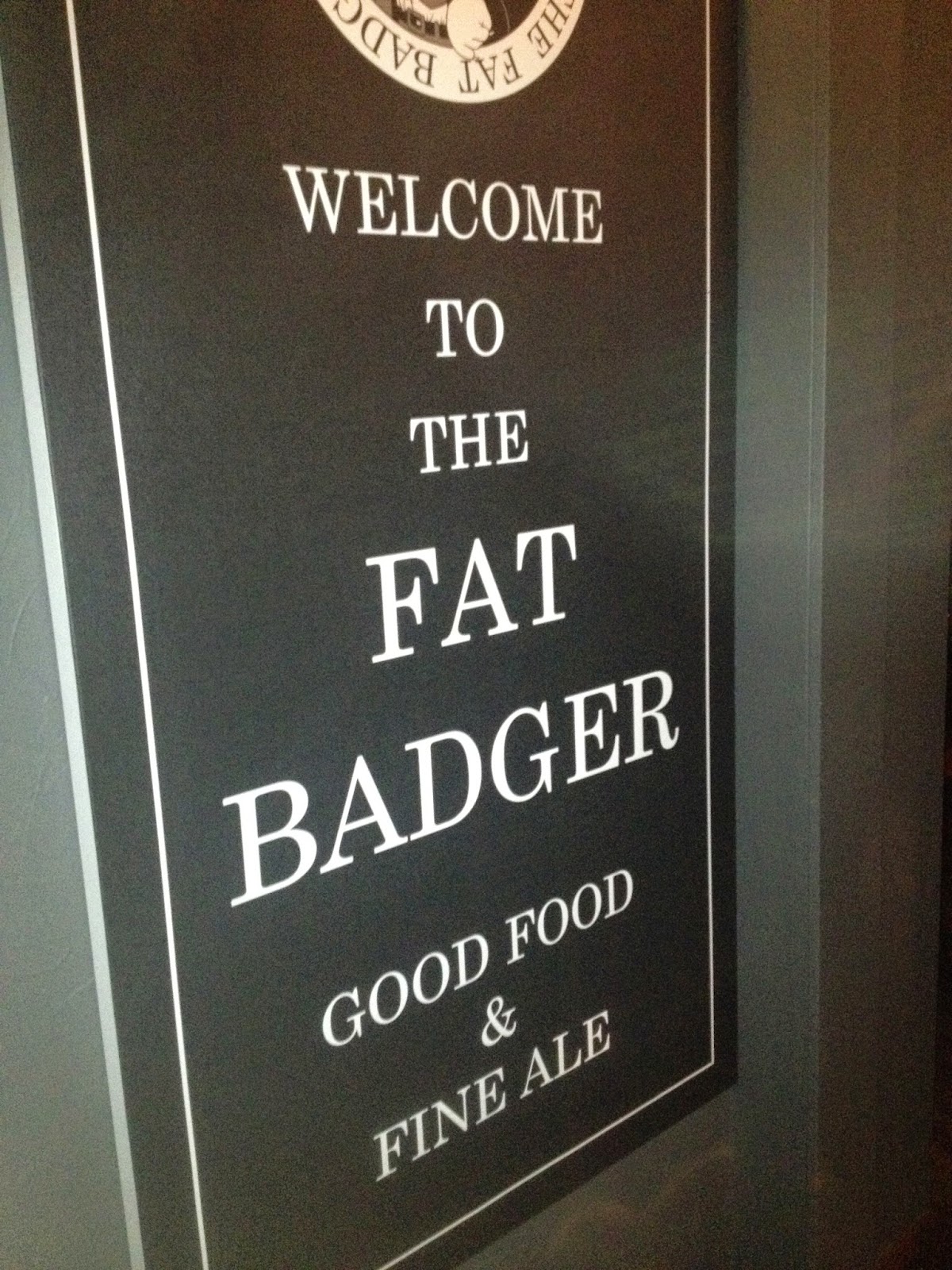 British pub food is admittedly not usually my thing but then again, Neil Taylor and his team are not serving your run-of-the mill pub food.

Yes, there is fish and chips, yorkshire pudding, meat pies and all those the other goodies that one would expect at a British pub, but there is also a whole lot more in terms of variety and creativity.

Fat Badger is located in one of downtown's few 19th century houses that used to house Le Gavroche, which served french food to Vancouver for over 35 years before shutting its doors last year.  The entrance opens into the downstairs where there is a washroom and a few kegs for decoration.  Up a narrow flight of stairs (I wonder how many people have tripped down here after a few too many!), one finds the main room which houses most of the seating and a great bar.  To the right there is an area with more seating that can be converted into a private room.  Overall, the space is very warm, very relaxed and very friendly- the perfect place to enjoy beers with friends on a Friday night (or any night!).  Add to that the British tunes playing in the background (there was lots of Rod Stewart the night we visited) and you may think you have been teleported all the way to Jolly Old England! 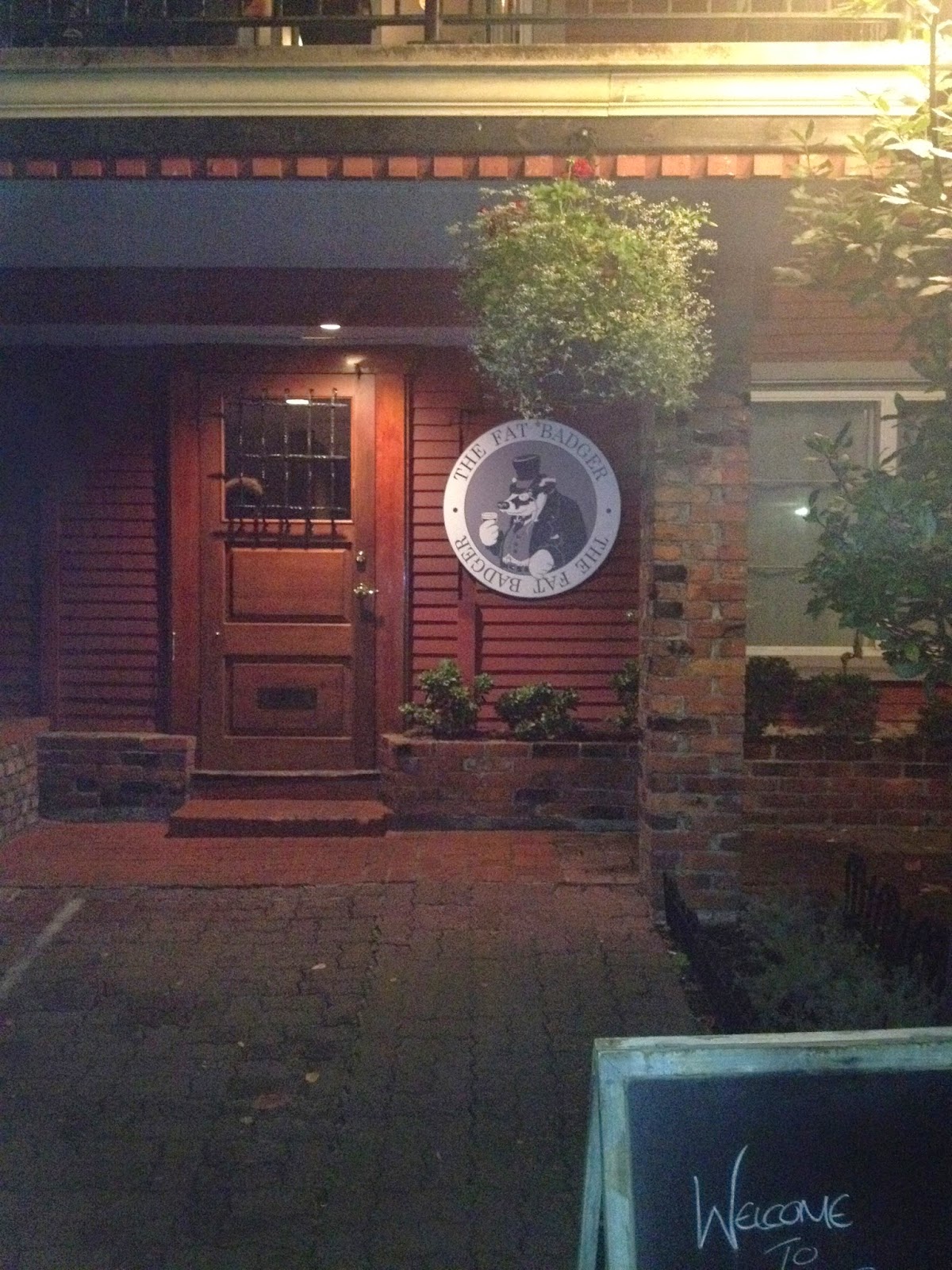 When we first arrived, we were seated at the bar for a short while and enjoyed the laid-back and friendly service.  When we got to our table however, we found service to be rushed and verging on rude.  After being seated for only a minute, our server came to take our orders, and looked annoyed when we were not ready.  After we did place our orders, we waited quite a while (almost 20 minutes) for a starter and then another 15-20 minutes for mains.  To our server's defence, it was a very busy Saturday night but, with such a fun and vibrant atmosphere, it would have been nice for the service to follow suit.

If you are a beer lover, The Fat Badger will be right up your alley.  They have lots of beers on tap, with a nice selection of local varieties thrown into the mix.  They also offer ciders for those who prefer it a little sweeter and, for total non-beer drinkers like myself, a small but well-chosen list of wines.

The menu, written up on the chalkboard at the back of the room, is divided into bar snacks, starters, mains and "puddings" (desserts).  As mentioned above, at least some dishes change daily, while some are tweeked a bit according to ingredient availability and others are left exactly as is due to popular demand.  Unlike most traditional British pubs, there was a nice selection of (non-deep fried) fish dishes and also some nice vegetarian options to choose from (we are in Vancouver after all!).  Unfortunately, we were disappointed to learn that by the time we were seated at around 8:30, they had ran out of 3 of the dishes we requested, including the only vegetarian main and their infamous pork cracking


Bar snacks:
Scotch egg and HP sauce- This British staple- hard boiled egg covered in sausage and bread crumbs the deep fried- is one of the items that stays on the menu night after night. 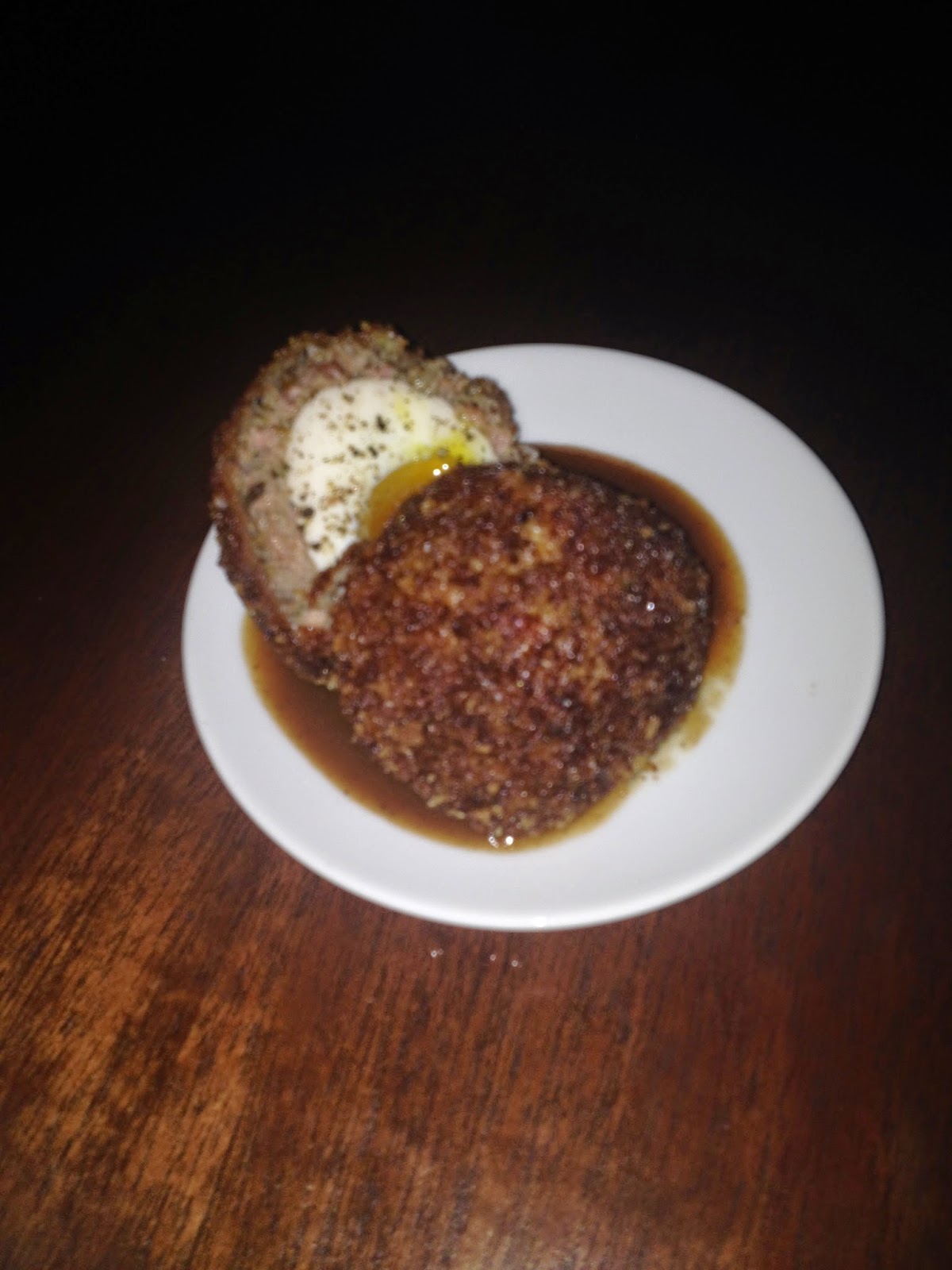 British west country poutine with cider braised pulled pork, cheddar, curds, grainy mustard and crispy sage- This is obviously not traditional British pub grub but highlighted the created side of The Fat Badger. 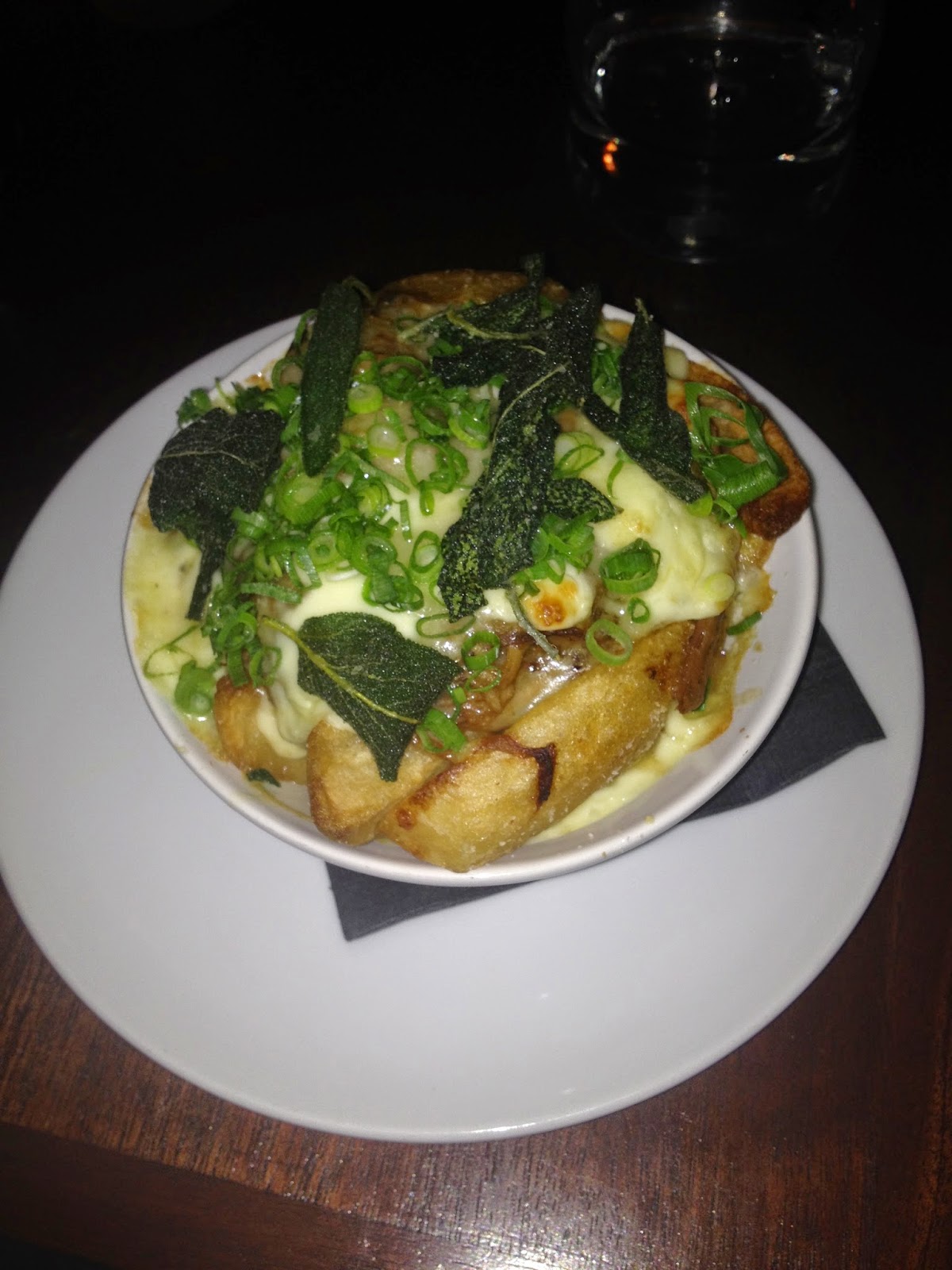 Starters:
Indian style crispy squid with green chilies and cucumber raita- What is British pub without curry, or at least a little Indian flair? 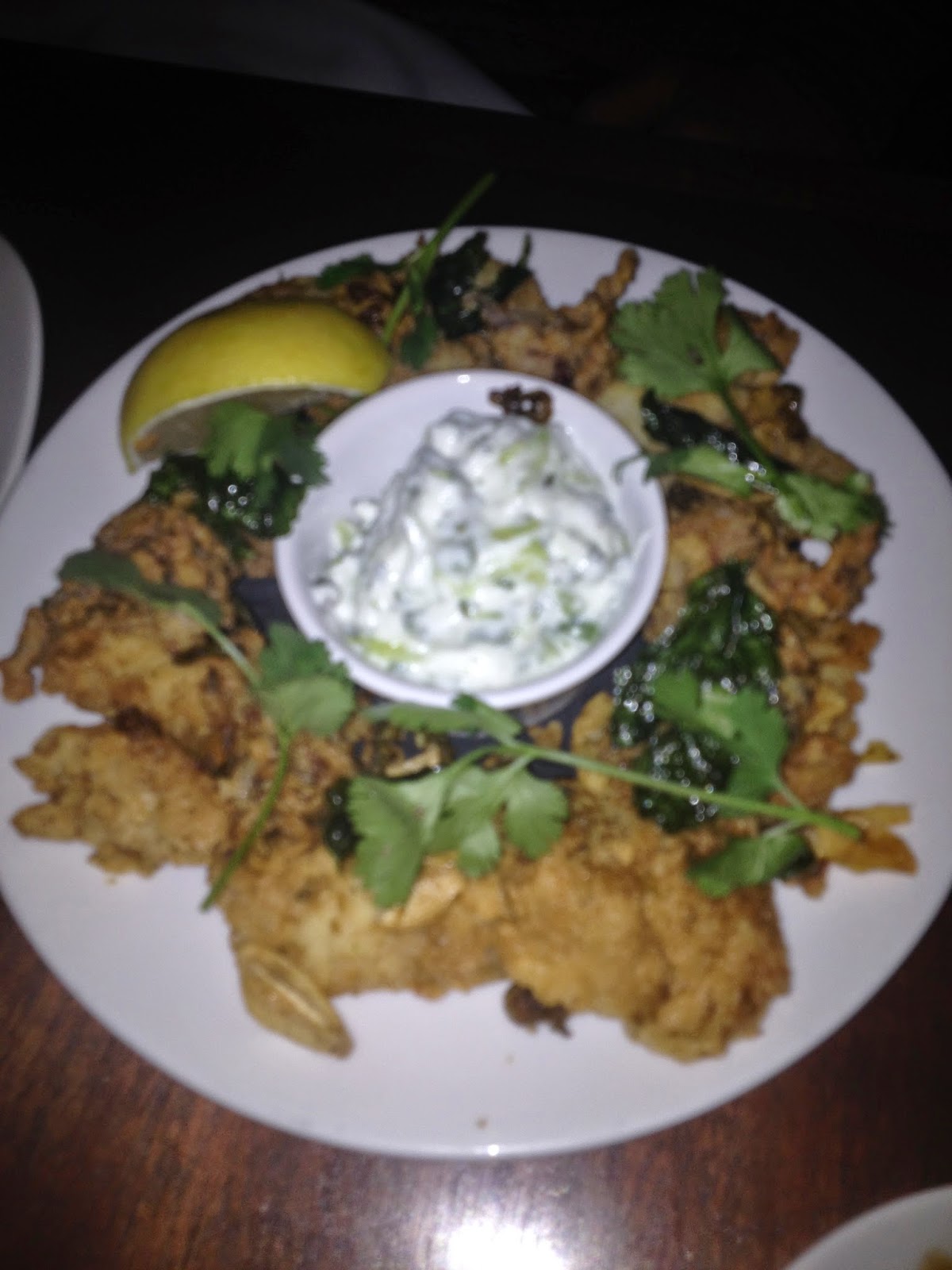 Mains:
Beer-battered cod n' chips, mushy peas, chip shop curry sauce- I was SO happy that Hubby ordered this.  Just look at the size of those fries!  Add a bit of that curry sauce and you would think you had died and gone to heaven! 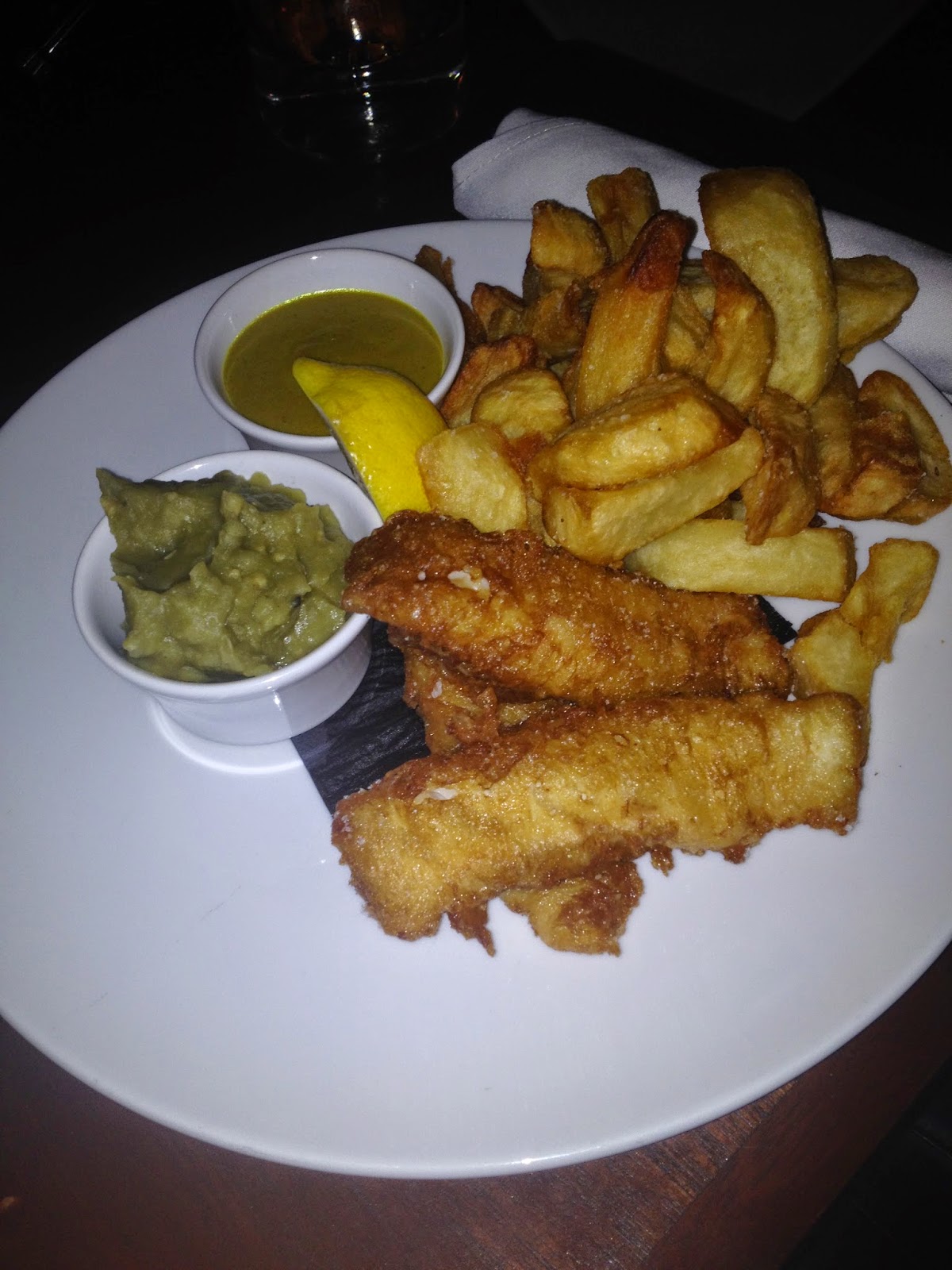 Grilled seabream, warm potato salad, wild mushrooms, broccoli, pickled fennel- As a pescatarian, this was my only choice of main since they had ran out of the vegetarian main already (a pumpkin tart with salad).  But I am not complaining.  The generous portion of perfectly-cooked seabream was accompanied by a "stew" of  lovely fingerlings, mushrooms (my fave!) and a few broccoli florets for colour.  I even liked the fennel on top (historically my least favourite vegetable) as it really added lightness to an otherwise earthy and heavy dish.  What a great fall dish. 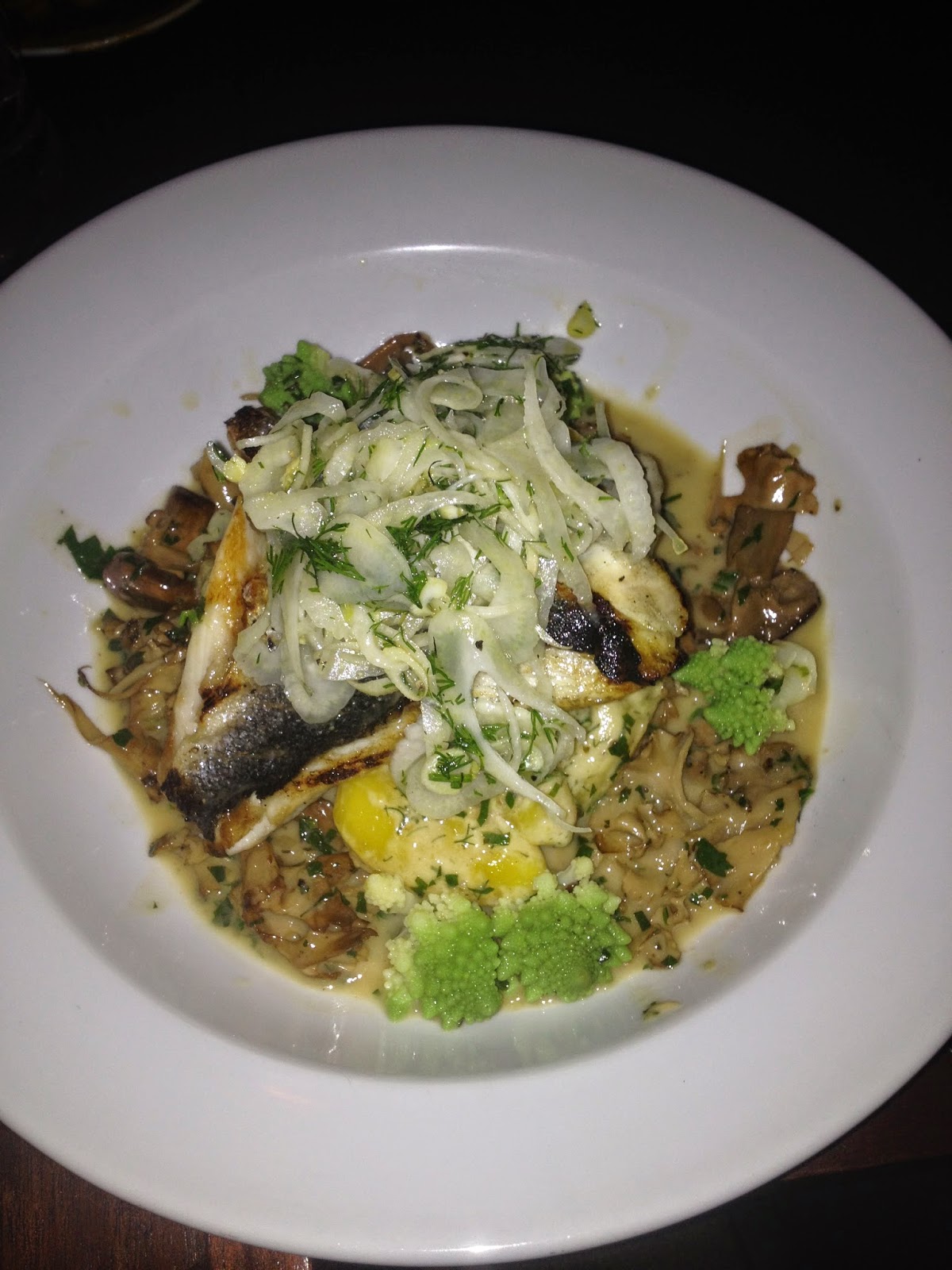 Overall, the consensus around the table about the food was very positive.  My friend who chose to order the two appies instead of the main felt they were just "average" but the two mains were very well conceived, well executed and very flavourful (Hubby is still raving about his fish and chips, especially that curry sauce!).  The poutine was also a decadent- but totally worth it- treat.  And while some of the aspects of the food are "Vancouverized", the portion size is not.  These hearty portions would surely please any healthy British appetite.

Overall, we were quite pleased with the Fat Badger and had the service been better, we would have looked even more favourably on the experience.  Fat Badger is definitely a boon to the Vancouver food scene as good pub food was pretty scarce before it came along.  Add in a little Vancouver flair and local ingredients and you have a restaurant that has no where to go but up.

Posted by Little Miss Locavore at 23:54