A Twist on Newfoundland Favourites at Mallard Cottage

Locavore Approved? A resounding YES- I admire Todd Perrin and his crew for switching up the menu EVERY SINGLE NIGHT.  This shows a real dedication to using only what is fresh and local, and is quite difficult to pull off.  It is something that only a confident chef dares to attempt and Perrin does it effortlessly.  He also does numerous special events throughout the year (pig roast, seal dinner) that highlights a specific Newfoundland protein. 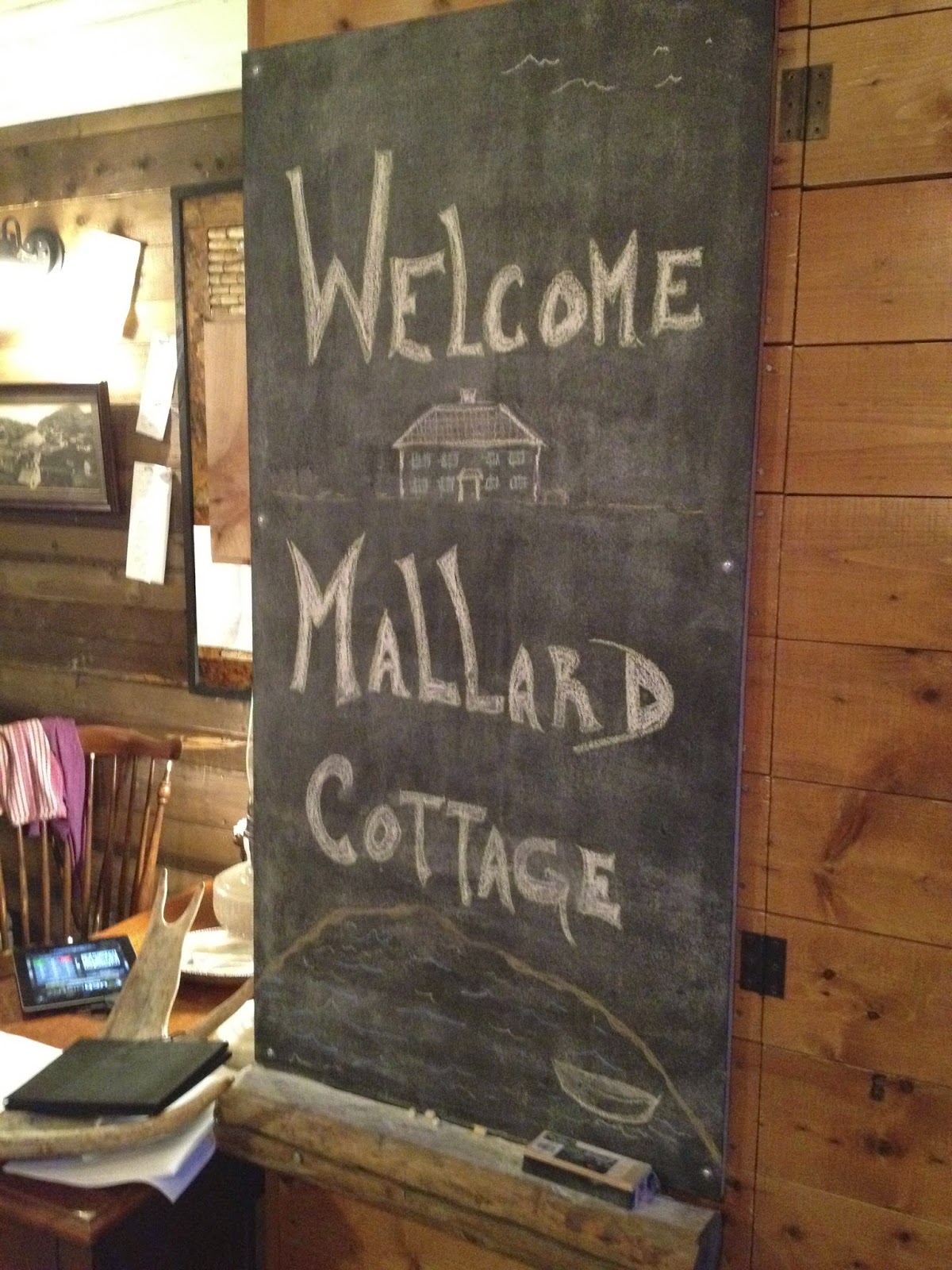 Hubby and I are Top Chef fans and therefore, it is no surprise that Mallard Cottage was high on my list of places to visit on my recent trip home to Newfoundland.  Todd Perrin, who did Newfoundland very proud in his quest for Top Chef Season 1 in 2011, has created a destination restaurant in St. John's Quidi Vidi village that celebrates Newfoundland and all it has to offer.

The building itself is a testament to the heart and soul that Perrin and his team have put into this venture.  The structure is an 18th century cottage that is recognized as a Canadian National Historic Site, and is said to be one of the oldest buildings in North America!  Perrin and his team not only purchased the building in 2011, but were also active participants (aka used their own elbow grease) to transform it into   Mallard Cottage, while still maintaining many of its historical elements.  After much blood, sweat and tears, including an electrical fire that delayed its opening by several months, Mallard Cottage opened in 2013 and has been a hit ever since. 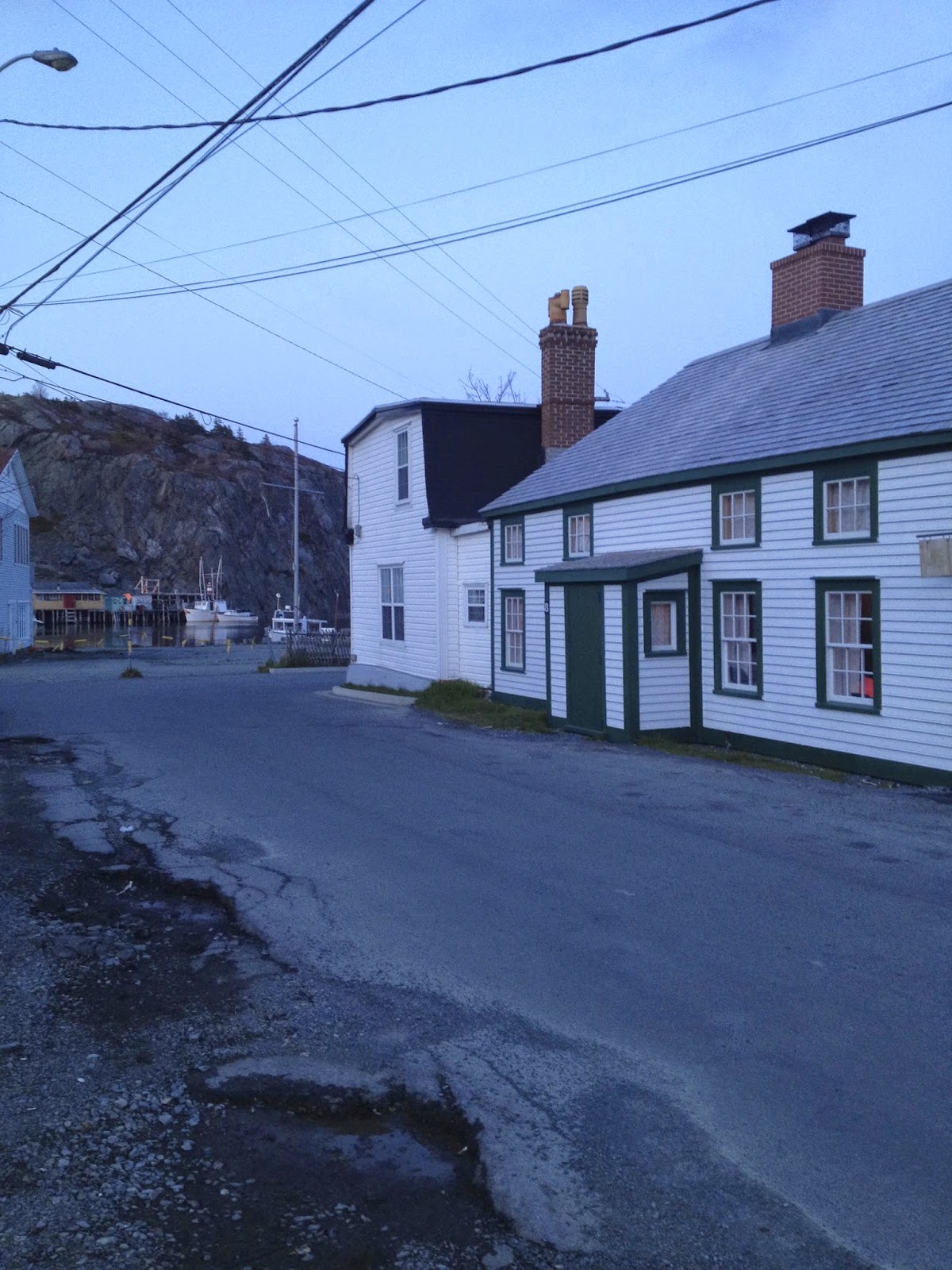 The restaurant is not located right downtown St. Johns, but is about a 5-10 minute drive (20-25min walk) from downtown in Quidi Vidi Village. The quaint little fishing village offers the perfect setting for Mallard Cottage and is great for tourists to get the true Newfoundland experience.  It is separated into 3 rooms, with a large main room that houses the kitchen and two smaller rooms at the back.  We were seated in one of the small rooms right next to a roaring fireplace.  The other small room was being used for a large party.  While I did enjoy our intimate little space, I would have preferred to be seated in the main dining room where all of the action was.  Also, we did find our room rather dark, even with the fireplace behind us. 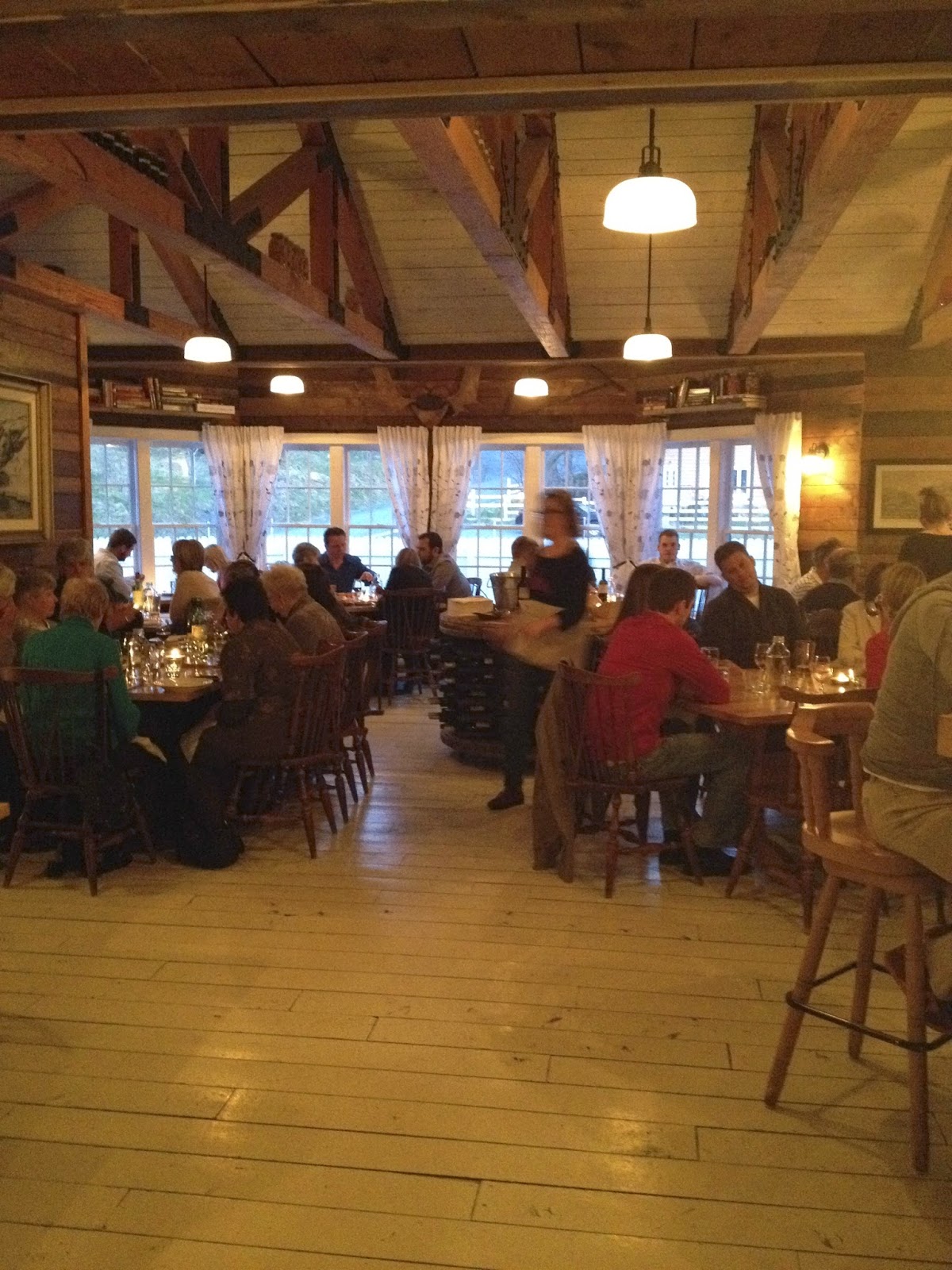 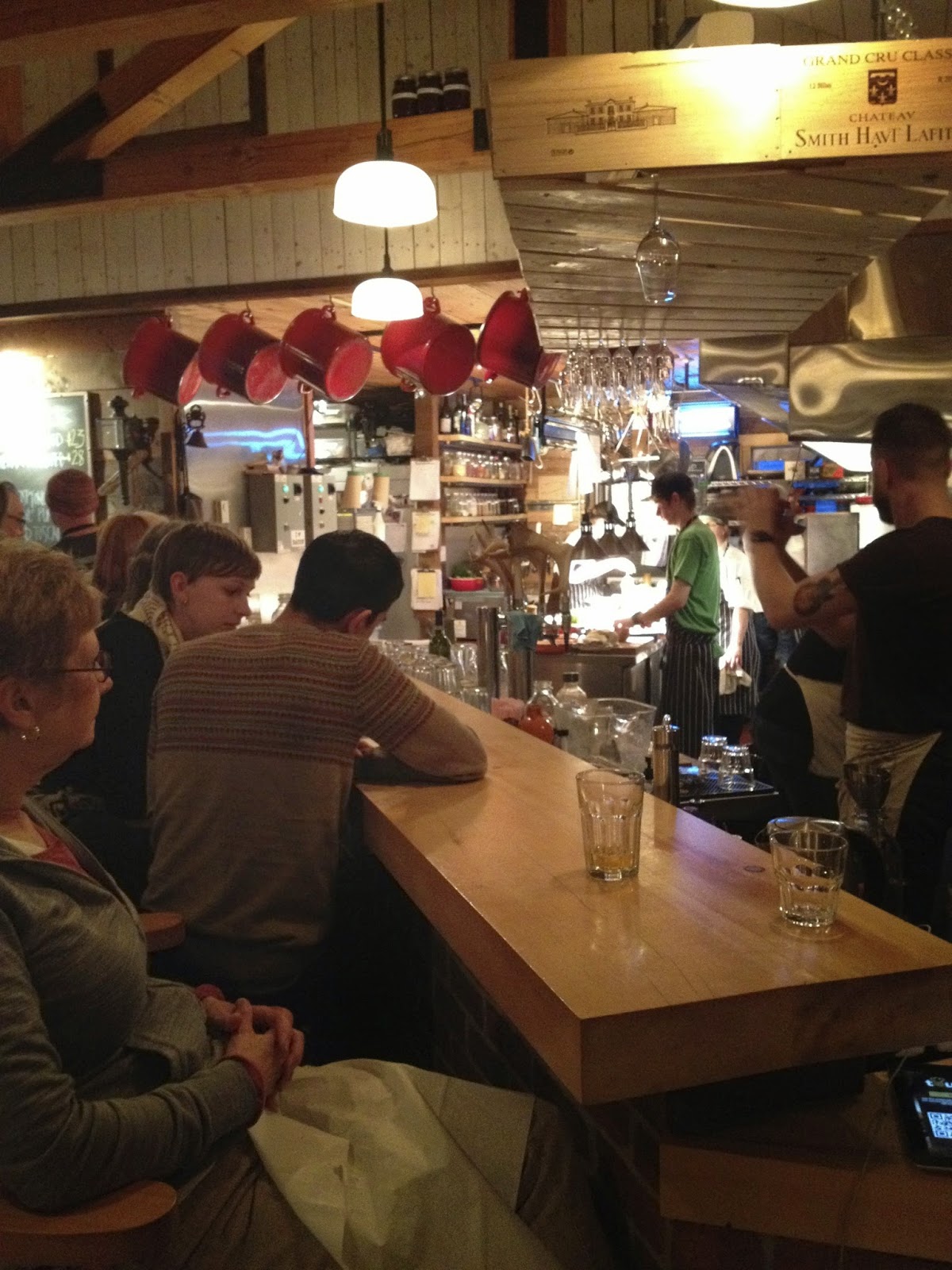 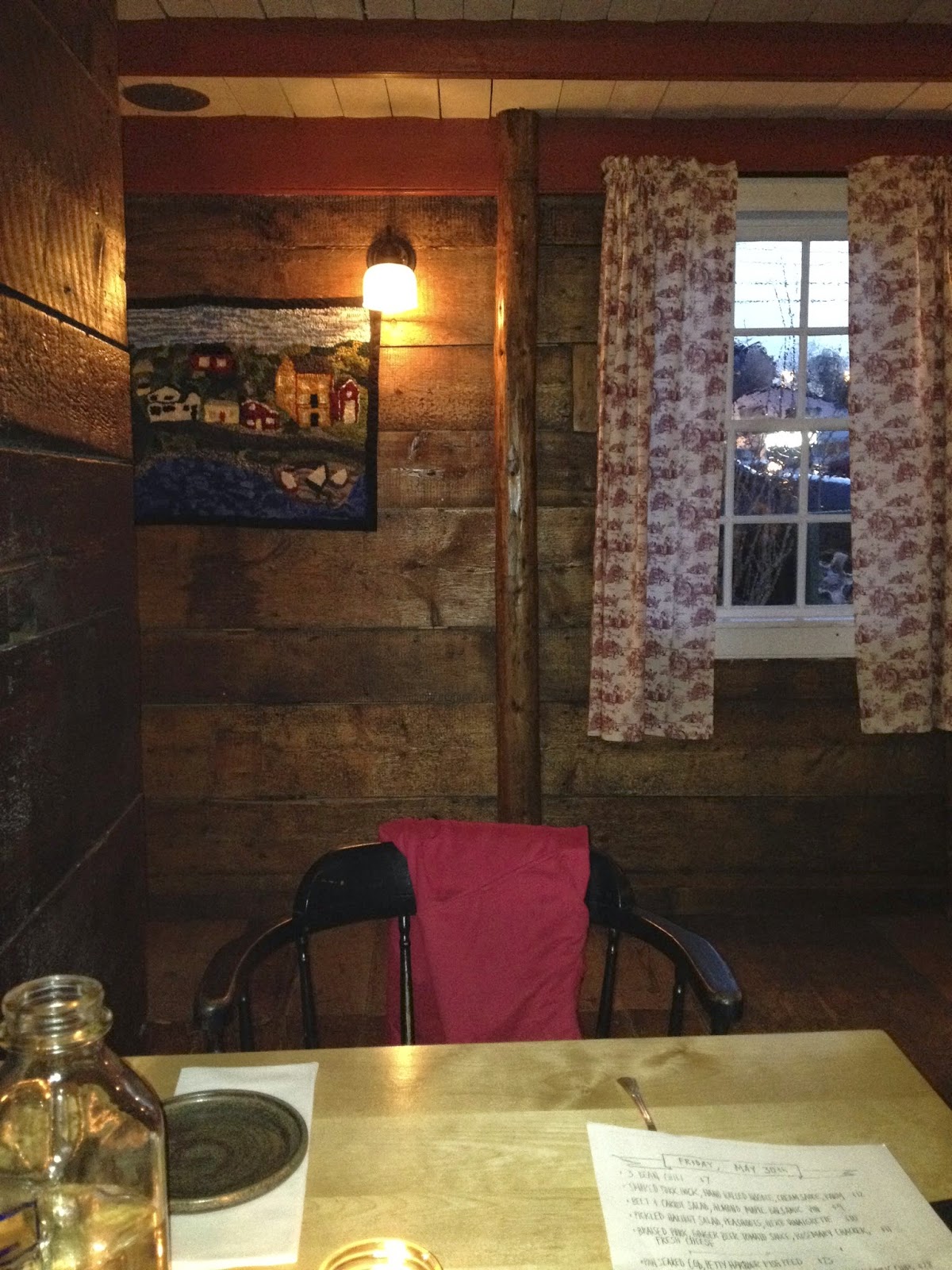 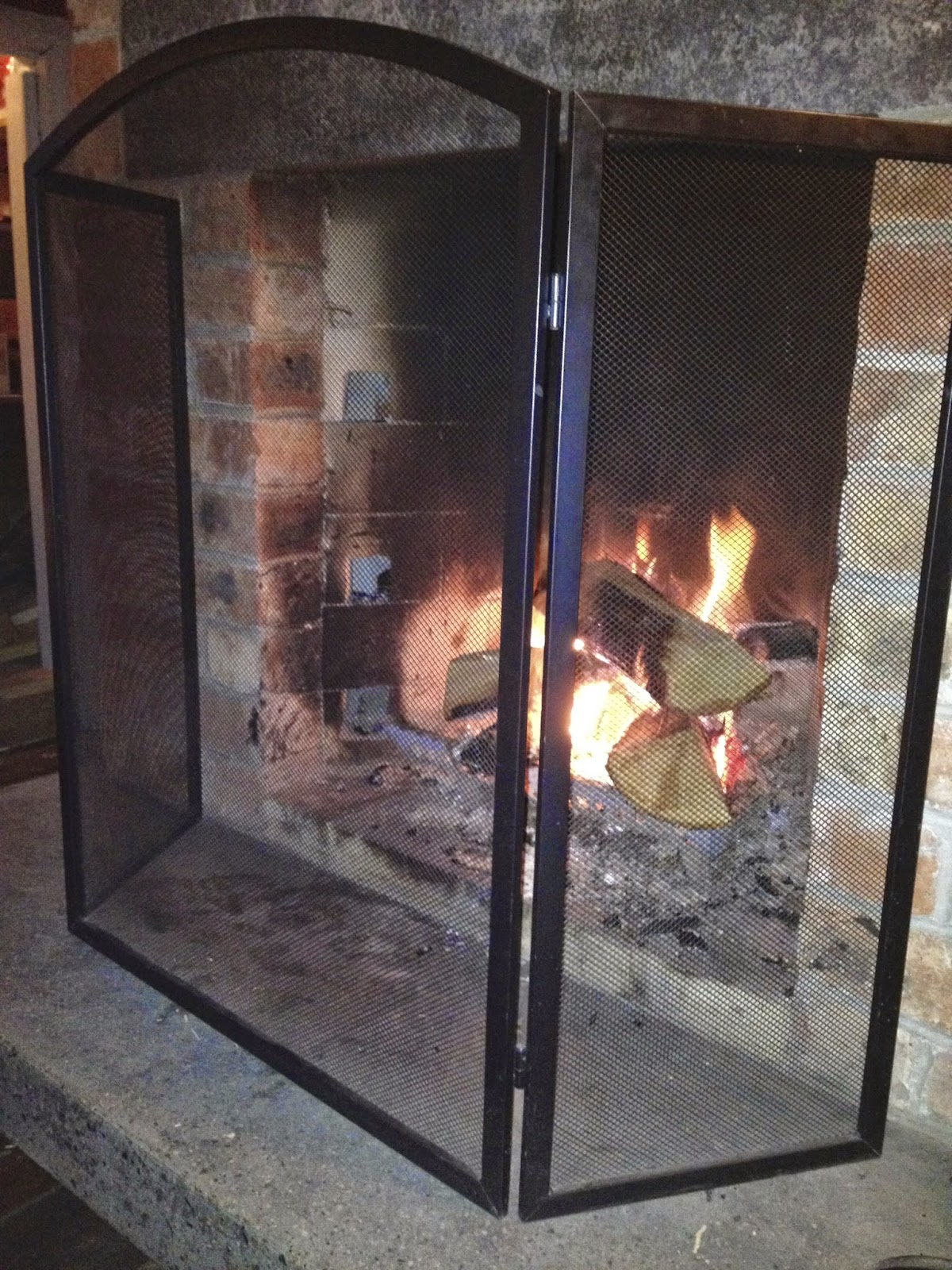 In keeping with Newfoundland's reputation, Mallard Cottage delivered some of the friendliest service I had had in some time.  Even though the place was absolutely packed and there were moments that some staff seemed just slightly "frazzled", they continued to be very jovial and attentive throughout our whole meal.  Between the great atmosphere and the extra-personable service, I could almost picture myself at a Newfoundland kitchen party.

Another thing that I just LOVE about Mallard Cottage is the ever-changing menu.  In comparing our menu with the menu from the evening before, there were a few identical dishes but many were new while others were variations of previous dishes.  The menu is written on a large chalkboard in the main room and also on a smaller board in our "small" room.  We were a bit disappointed to find that 2 out of the 5 entrees were sold out by the time of our 9pm reservation so if you want the full selection, be sure to make a reservation earlier (yes, you NEED a reservation, this place is busy!!!).  A word of caution to vegetarians- it is likely you will not be able to find anything to eat as their mains focus on seafood and game (not sure if they make modifications to accommodate this).  A second word of caution- if you are a carb lover, you will need to pay an extra $1.50 for their house-made rolls, which does seem a bit unreasonable considering the prices here ($9-15 appetizers, $23-30$ mains).  Having said that, the mains are quite sizeable and the addition of bread would have left us overstuffed. 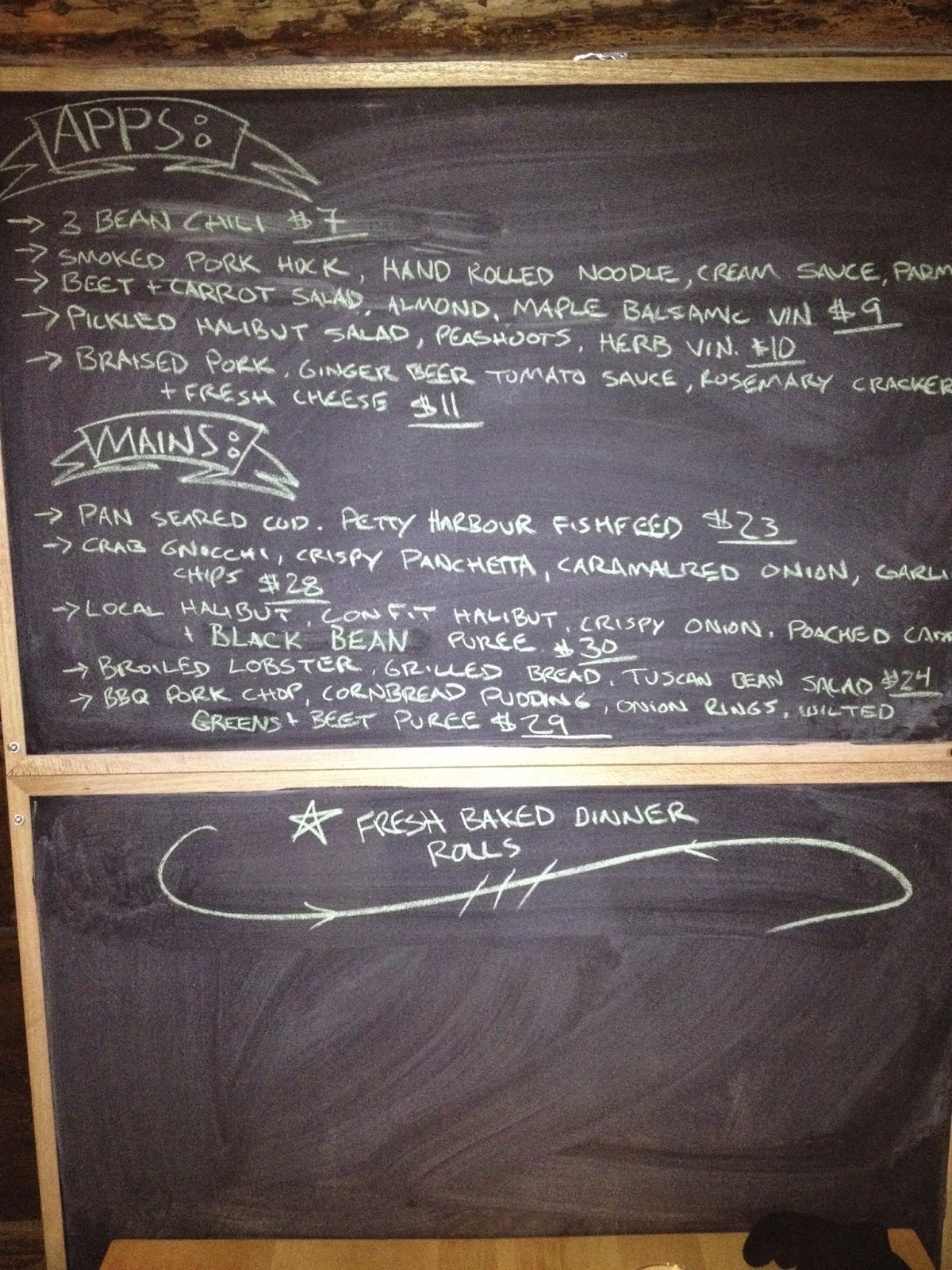 On Saturday nights, Perrin mixes it up and serves small plates instead of appies/mains.  In addition, there is a weekend brunch that is rumored to be awesome (this is on my agenda for the next visit!).

They have a small but decent wine list, with a selection of Canadian wines but only a few wines are offered by the glass.

Here is what my mom and I enjoyed:

Amuse bouche- This little mound of egg salad on flatbread, topped with a sliver of pork tenderloin, was a very delicious bite and a perfect start to a rustic Newfoundland meal. 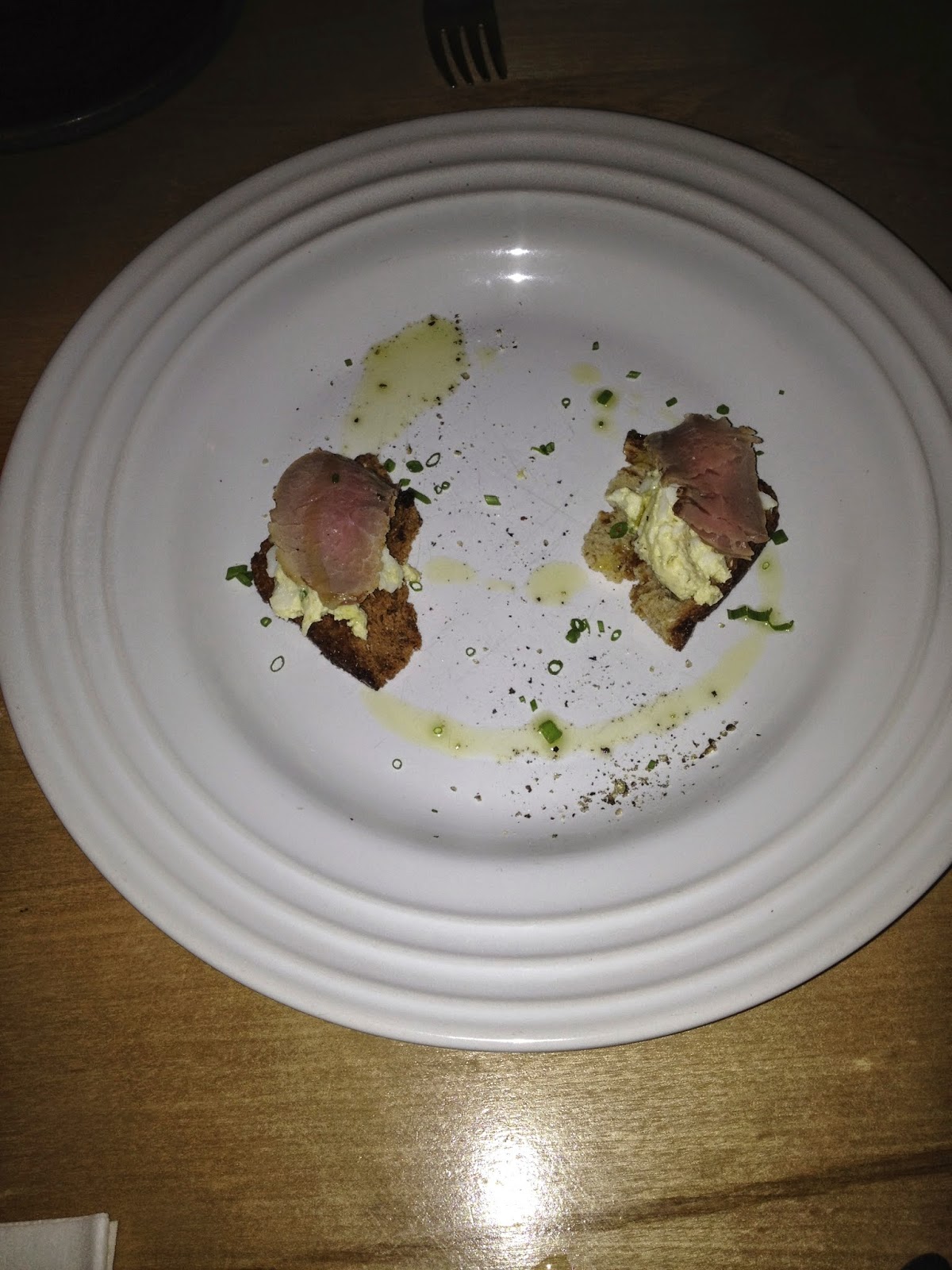 Beet and carrot salad, almond, maple balsalmic vinagrette- I hate to say it, but this was the only  "let-down" of the night.  While there was nothing particularly wrong with it, there was nothing special about it either.  Just some shredded carrot and beet, tossed in dressing with maybe 2 almonds sliced over top.  Really not worth $9 in my opinion. 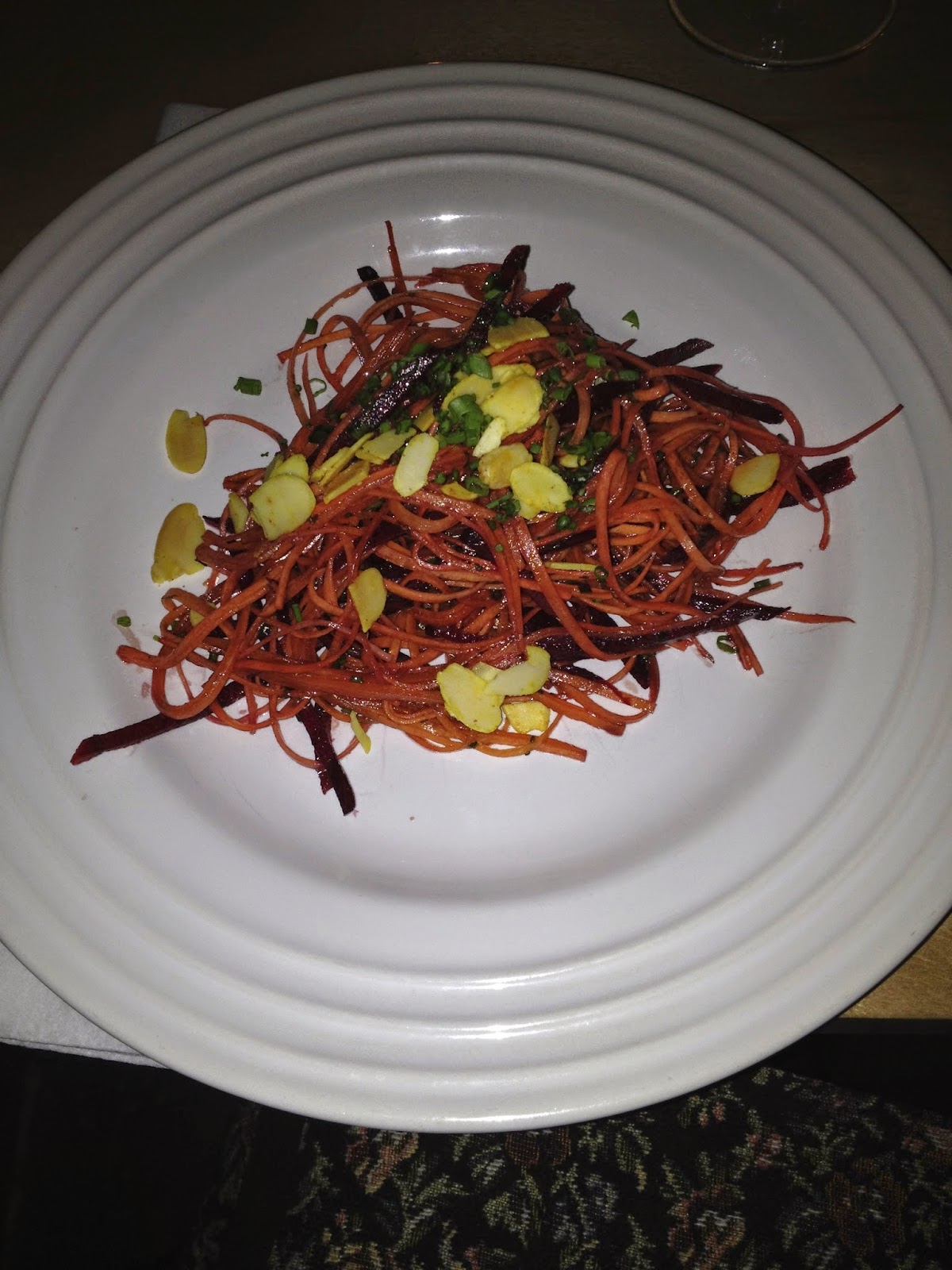 Braised pork, ginger beer tomato sauce, rosemary cracker + fresh cheese- Fortunately my mom's appie was much more successful than mine. Three mounds of delicious braised pork sat atop a thin cracker and was finished with the mildest of cheeses for both taste and texture.  I loved how the succulent pork really took center stage. Local halibut, confit halibut, crispy onion, poached carrot and black bean puree- While my halibut was admittedly ever so slightly overcooked, it had lovely golden crust on top and was served plain so as to really taste the fish.  At first, the black bean puree seemed a little bland on its own but when mixed with the other elements on the plate, it worked well.  I loved the chunks of poached carrots that added the expected rustic element a-la Mallard Cottage style. 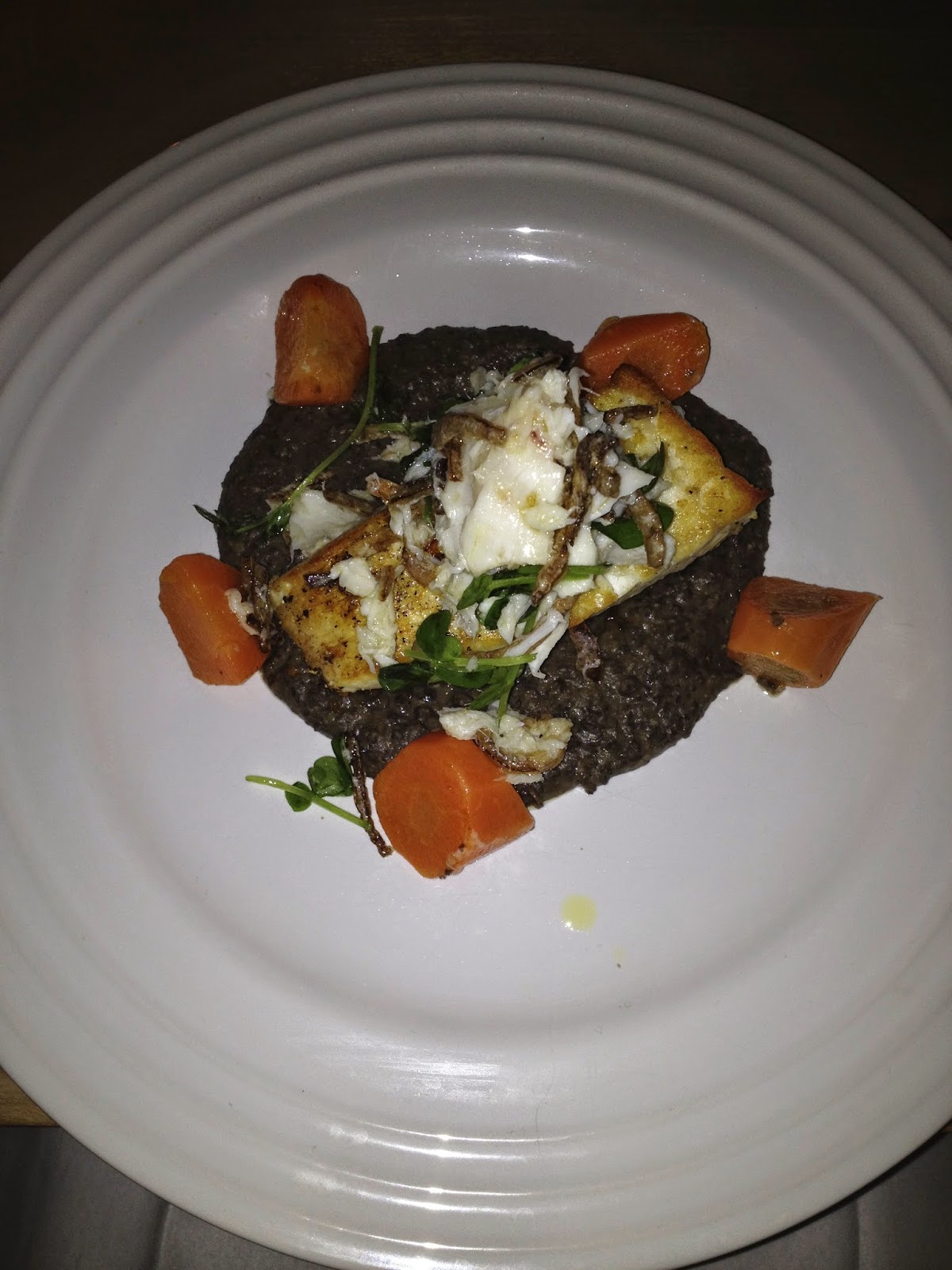 Pan-seared cod, Petty Harbour fish feed- This one perplexed us at first as we had no idea what "fish feed" meant (even being from NL!) but it was actually a play on Jigg's Dinner.  Jigg's Dinner is a traditional Newfoundland "Sunday Dinner", made with salt beef cooked together with vegetables (usually carrots, turnips and potatoes, pease pudding and figgy duff (read more here and also explore the web for recipes).  If you are lucky, there may even be a turkey or ham too, but this little riff on Jigg’s Dinner was served with absolutely perfect melt-in-your-mouth cod.  The potatoes underneath were intertwined with tasting little bites of salt pork that my mom adored.  All of these tasty elements were served in a cute La Creuset dish, as were many other of the mains that evening.  This really was Newfoundland on a plate. 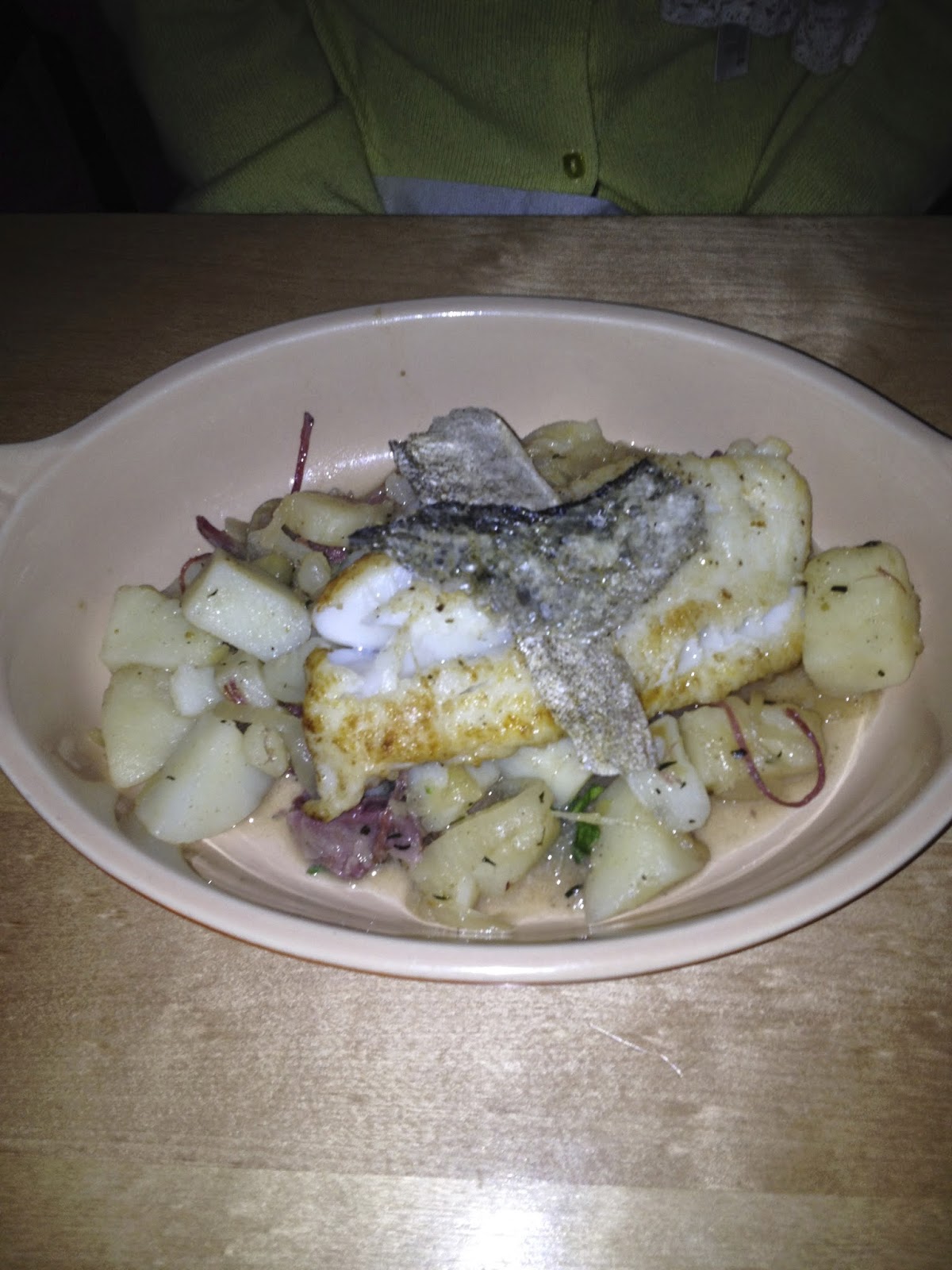 Although we were too full for a full dessert, we were served a piece of maple fudge each with our bill that my mom still raves about (extra-sugary, not too creamy- just the way she likes it!).  I just loved the presentation, with everything coming out on an antique piece of board. 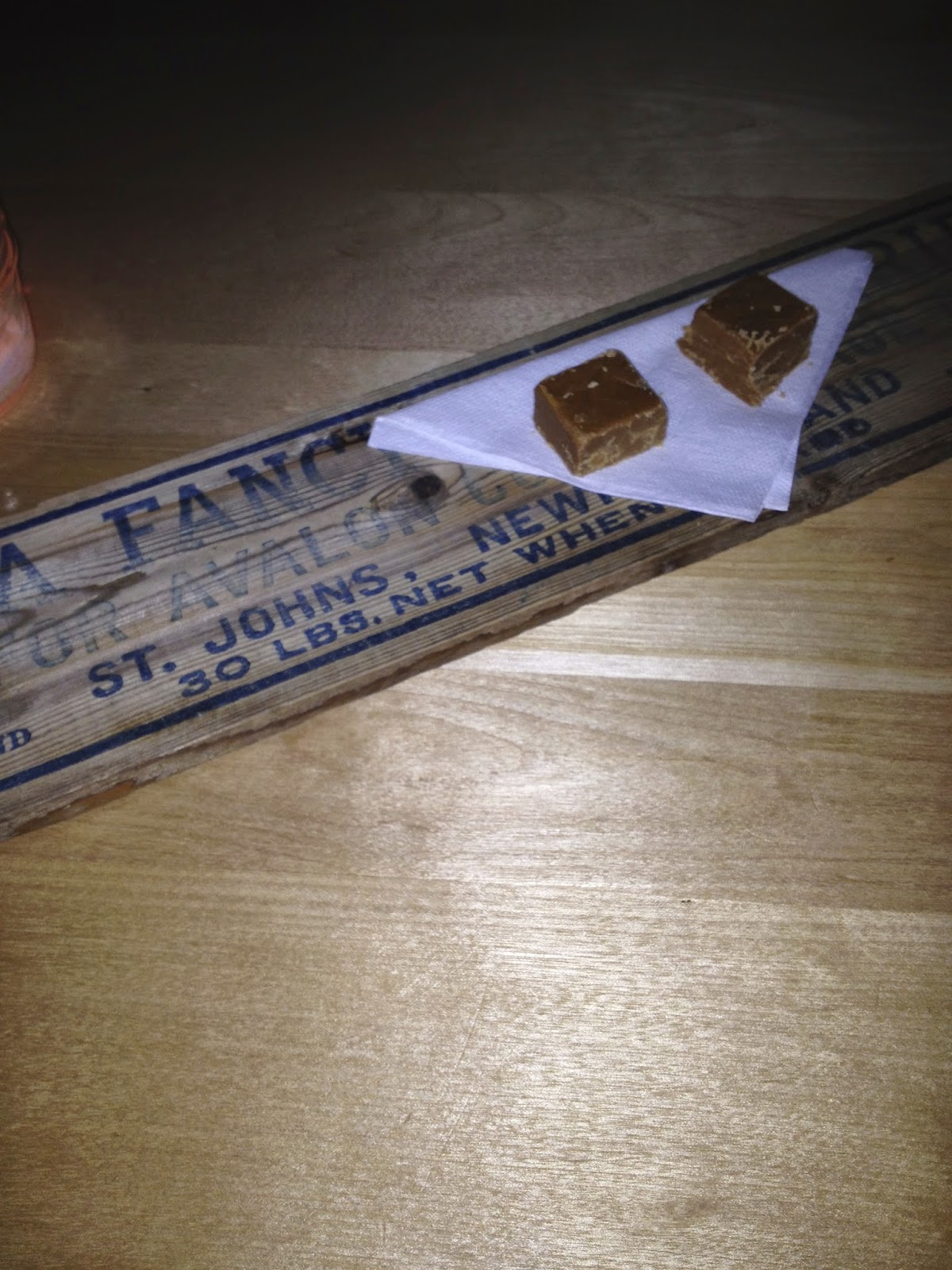 Speaking strictly about the food, this was not quite a perfect meal but I just love this place nonetheless.  With Perrin switching up the menu on a nightly basis, there are bound to be a few misses here and there and I think he is a master of his craft for attempting it.  The nightly menu keeps things new and exciting and, more important, as fresh and local as possible.  Also, I love how Perrin takes Newfoundland favorites and tweaks them such they are  close enough to the traditional dishes for tourists while still getting locals to step outside of their comfort zone a little.

Being a native Newfoundlander, it makes me very proud that so many are flocking to Perrin’s restaurant.  The building, the rooms, the service and the food all embody what Newfoundland is all about- rustic beauty, warm people and darn good food.

Posted by Little Miss Locavore at 11:12