Locavore Approved? YES- Although it may not be as apparent during the actual dining experience (they do not make a big deal of it during service), a quick glance at their website will make you realize that Chef Mourad Lahlou and his team are hard-core locavores.  A whole section of their website is devoted to describing i detail where their ingredients come from, by including not only the name of the farm but also the name of the farmer, the distance of the farm from San Francisco and the specific products that were purchased at that farm.  I applaud the folks at Aziza for giving credit where credit is due and rightfully including farmers as members of the production team!


Aziza was the first place I booked for our Michelin star-packed weekend in San Francisco over the Thanksgiving Day log weekend.  I have always had a fascination with Moroccan food and its amazing flavours but have not eaten a whole lot of it (Morocco is on the bucket list!).  Aziza is the only Michelin star restaurant to feature Moroccan food, so there was no way that I was leaving San Francisco without trying it!

Although this should not be a deterrent to checking it out, Aziza is located quite far outside the downtown area and will take a bit of a trek to get to.  It is located in the Little Russia district, and as you approach Aziza you will note several Russian restaurants and bakeries on the way.  Aziza has quite a large lit-up sign on their storefront, making them easy to locate at night.  Inside, there is certainly a Moroccan flavour to the decor without being too cheesy or over the top.  The space is quite a bit larger than it appears from the outside, with a snazzy bar set up at the front, a large main room, and then a few smaller rooms in the back where we were seated.  The division of the space into separate rooms provided a more intimate dining experience than one may have experienced in one large room. 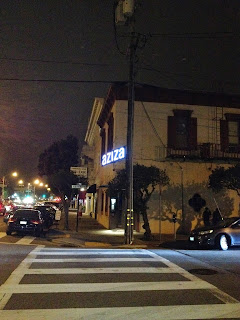 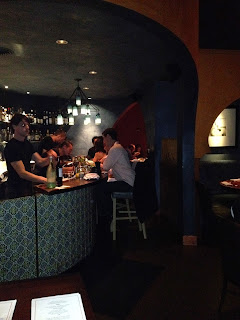 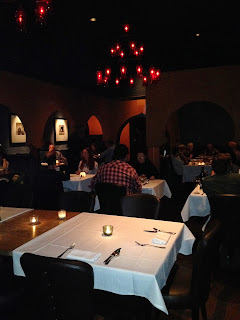 I must admit that I have mixed feelings about the service.  At the outset, it took quite a while to get our cocktails.  Having said that, they brought us a nice glass of sparkling wine on the house to enjoy as we waited which definitely put them back in my good books from that respect. The rest of the service was efficient was seamless.  The only general comment I have is I found the service rather cold.  I felt almost intimidated by our server, making me a bit reluctant to ask questions about the restaurant or the food.  I am not sure if this was just a one-off experience or the norm but I would have appreciated a bit more personality and interaction.

Fortunately, as far as the food is concerned, there is no shortage of personality!  Because our other restaurant pics for the weekend both had "mandatory" tasting menus, we decided to go "a la carte" here at Aziza so that we would not go into a tasting menu food coma by the end of the weekend. Here were our choices for the evening:

Cocktails are a major focus at Aziza and are a must-try.  The head of the bar program, Farnoush Deylamian, has compiled quite a list of unique creations which he cleverly organizes into categories according to type of alcohol (gin, whisky, brandy, etc.).  The cocktails contained an impressive assortment of fresh herbs, vegetables and fruits, most of which were locally sourced.  I am a big fan of more savoury cocktails so I chose a drink with thyme, cardamom and gin that was very clean and fresh.  This is a feel-good cocktail if there is such a thing!  Hubby chose a whisky-based drink with concord grape (a new favourite fall flavour of his), elderflower, peas smoke, and scotch. Even if you have no idea what some of those flavours are, take Hubby's word for it- it tasted amazing! 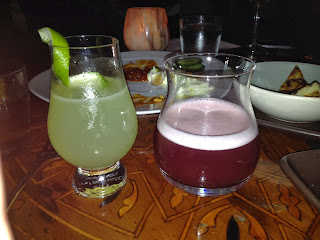 Now, on to the food.  We were quite impressed by the generous portion size for this type of restaurant.  Although there are Moroccan elements incorporated into most of the dishes, there was less of an emphasis on Moroccan flavours than I had anticipated.  Having said that, Chef Lahlou certainly has a way with flavours and was able to really elevate the locally-sourced produce without hiding their deliciousness.  Here is what we were treated to on our visit:

Flatbreads and Spreads- Do not even think about stepping foot in Aziza and not ordering this.  I am forever grateful to all of the blog posts and restaurant reviews of Aziza that I have read beforehand because, had it not been for the rave reviews of this appetizer, I would likely skipped right over this on the menu.  I cannot even bear to think about what a shame this would have been, as these flatbreads may have been one of the best things I have ever ate.

This sharing plate seems to have a permanent place not he menu but the spreads change regularly.  On the night that we visited, we were treated to a combo of tomato jam (my personal favourite, loved the zing from the lemon rind!), yogurt bottarga and piquillo-almond (Hubby loved the combo these latter two).  The spreads were served with the most delicious flatbread I have ever had- chewy of the inside, beautiful grill marks on the outside and a touch of salt to finish it off.  This dish was so good that, instead of ordering dessert, we asked for a second order of flatbread so that we could scoop up our remaining spreads.  All I can say is "WOW"! 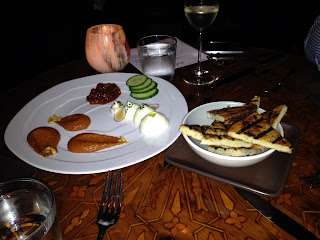 Tomato Salad- I have developed a new-found respect for this amazing summer vegetable after tasty so many delicious varieties from our local Farmer's Market over the past month so I was very excited to see it featured on the menu.  What I loved the most about this salad was the simplicity.  The perfectly sweet tomatoes made up most of the dish and they were pretty much left alone.  Why mess with such a superb product?  All of the other elements on the dish, including melon, harissa, green beans and harissa, added extra flavour and textural elements without overshadowing the tomatoes.  I was impressed by how a dish could so simple, yet so refined. 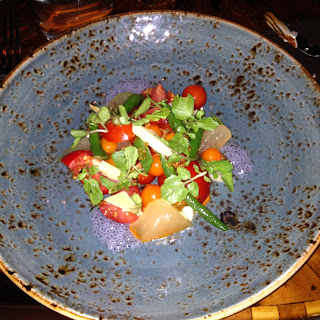 Chicken wings- As soon as Hubby saw the menu, his eyes were drawn to this appetizer.  What man does not like a good plate of chicken wings?  Chef Lahlou took this classic American dish and kicked it up a notch with Moroccan flavours (nigella seed, cashew, yogurt).  The skin was perfectly crispy an the meat was moist, as every good chicken wing should be.  As with the flatbreads, this also seems to  be a mainstay on the menu based on previous reviews which is not a surprise considering how much Hubby enjoyed it! 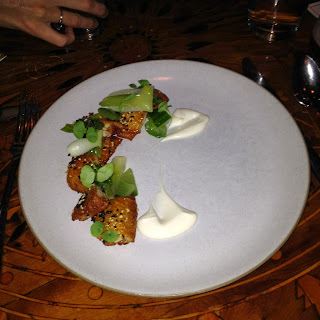 Market Fish- Although it was tough to forgo the black cod on the menu, I am aways drawn to the market fish which is usually the freshest and most local bet in terms of seafood.  On our visit, it was a rainbow trout from Northern California, which was cooked to perfection, crispy skin and all!  It was served with fried rutabaga, salty green olives and beans.  Just a word of caution- the red charmoula sauce sitting underneath the fish was ultra-spicy so if you are not into heat (which I fortunately am!), this may not be your thing.  Overall, a lovely dish. 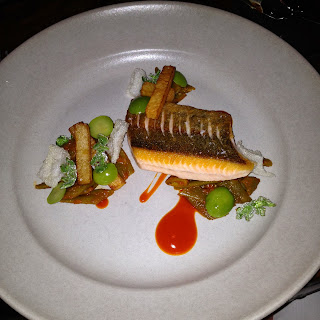 Cornish Hen- This was hubby's entree choice.  He expected it to come as a full bird, but instead, there were little "medallions" of hen on the bottom with a pate of sorts stacked on top.  Scattered around the little "towers" were a variety of mixed mushrooms and frisee for a dash of colour.  Our server poured a lemon-chili broth over the dish tableside which was a nice touch, and added nice flavour to the dish. 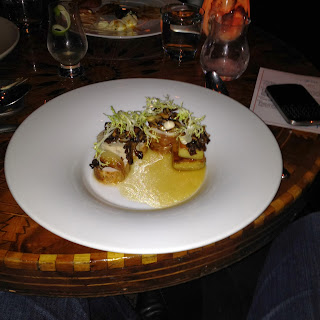 All in all, we had a terrific first night in San Francisco at Aziza.  The dishes were all very well-executed (we will be raving about the flatbread for years to come!), and our meal from the a-la-carte menu was very reasonably priced as compared to other Michelin star restaurants.  I must applaud the chef and his team for their dedication to supporting local farmers, thereby treating his customers to the best possible ingredients.

We look forward to a return visit to Aziza on a future San Francisco weekend to try his highly acclaimed tasting menu, so stay tuned!

Posted by Little Miss Locavore at 22:34